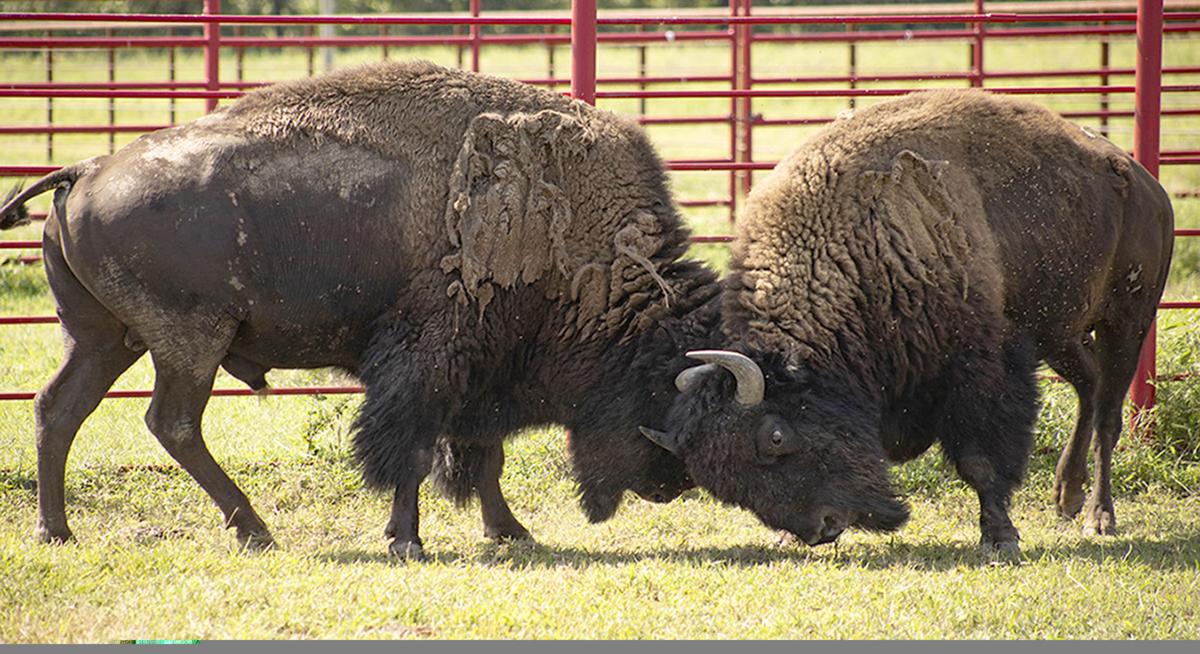 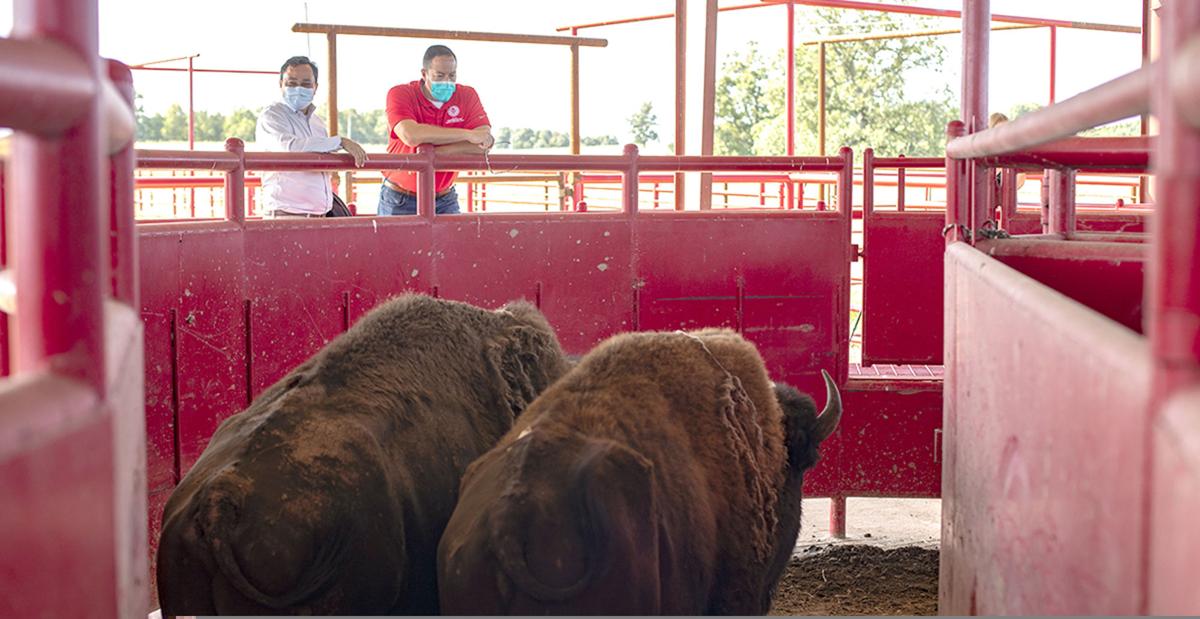 They are expected to help bring the herd one step closer to supporting sustained production of bison steaks and burgers for Cherokee elders.

Awarded to the Cherokee operation through a partnership with the InterTribal Buffalo Council, headquartered in Rapid City, South Dakota, the bison are intended to boost genetic diversity and productivity of the herd, according to Cherokee Nation Deputy Chief Bryan Warner.

“It’s something Principal Chief Chuck Hoskin Jr. and I talked about at the beginning of our term,” he said. “There were some things we wanted to change, and part of that is getting more genetic diversity in the herd.”

He emphasized that the 180 bison that roam 1,000 acres near Kenwood are healthy but that, not unlike other livestock operations, good bison genetics can build a more robust herd that grows faster.

“It’s nothing that would look wrong to a layman,” he said.

An example is that someone who knows about bison might look at a cow in the herd and think it looks like a 1½- or 2-year-old, but it’s actually a 3-year-old.

“A lot of that has to do with genetics,” he said.

The Cherokee Nation continues to work with the council, which awards surplus bison from national parks each year to its member tribes, and hopes to obtain another 25 or 30 cows, he said.

A goal for the herd, established in 2014, is to increase its number to a sustainable 500 that would produce an annual surplus for slaughter that could, among other possibilities, provide meals for Cherokee elders.

“That is our goal, and I hope I get to see that happen before my term is up,” Warner said. “It’s one of those things most treasured by our elders, and we want to try to provide that if we can. … I would like to see that farm-to-table kind of thing.”

The two young bulls, each between 1,000 and 1,500 pounds, were trucked over 1,000 miles from Yellowstone National Park to Delaware County this week.

Both animals managed the stress of the trip well, Warner said. They were at first held separately from the others in the herd to be slowly introduced into the population.

The two bulls will put on hundreds more pounds each to reach their massive 2,000-pound adult size, and in the meantime they will find their place in the hierarchy among other bulls and eventually reproduce naturally among the herd, he said.

As decendants of the buffalo that once roamed free more than 100 years ago, the new genetics bring a lineage to the herd welcomed in more ways than one, he said.

“Yellowstone buffalo are significant to tribes because they descend from the buffalo that our ancient ancestors actually lived among, and this is just one more way we can keep our culture and heritage and history alive.”

“This partnership with the InterTribal Buffalo Council continues to benefit the Cherokee Nation by allowing the tribe to grow a healthy bison population over the last five years,” Principal Chief Chuck Hoskin Jr. said in a press statement.

“Historically, bison provided an essential food source for tribes. Every part of the bison was used for food, clothing, shelter, tools and ceremonial purposes. These newly acquired bison will help revive some ancient cultural traditions, as well as provide expanded economic opportunities for future generations of Cherokees.”

Although bison are associated more with the Great Plains tribes, woodland bison once roamed the Cherokee Nation and all along the Atlantic Coast. Prior to European colonization, the animals played a critical role for the Cherokee people as a vital food source.

After European colonization, bison were mostly wiped out from the eastern and southeastern parts of present-day United States.

Gov. Stitt plans holiday with his parents: 'Oklahomans should be with their loved ones over Thanksgiving'

“I am going to do it safely,” Stitt said, adding he also plans to attend this weekend's Bedlam football game between the University of Oklahoma and Oklahoma State University.

Over 16 hours, Oklahoma reported daily records for hospitalizations, ICU patients and deaths. The federal task force also says "students are letting their guards down with Thanksgiving break less than a week away."

Oklahoma's four Republican House members say Trump is entitled to pursue legal remedies but won't comment on his behavior or say whether he thinks they'll win. None says he knows of any voter fraud.

In speeches and on social media, state Rep. Kevin McDugle has repeated Trump's claim that he trails in both the popular and electoral college votes because of "rampant fraud."

Stitt also said he could consider rolling back the reopening of the state after a previous shutdown if the current trends continue — but only after other measures are exhausted.

“It was hell,” the Talala man said. “Whatever you think how bad it could be, it was probably 10 times worse. You hear people wheezing and coughing and wondering are they going to make it through the night.”

Bishop David Konderla said a Christian group that wants to publish moral statements but can't agree that "abortion is a grave evil" should continue without the Catholic diocese as a "co-signer" of its statements.

Kardashian West previously tweeted at Oklahoma Gov. Kevin Stitt, saying she believes Jones is innocent and calling for the state to "act now to save this man's life."

The OU Medicine doctor points to a study that says "precise interventions, like reducing maximum occupancy, may be more effective than less targeted measures while incurring substantially lower economic costs."