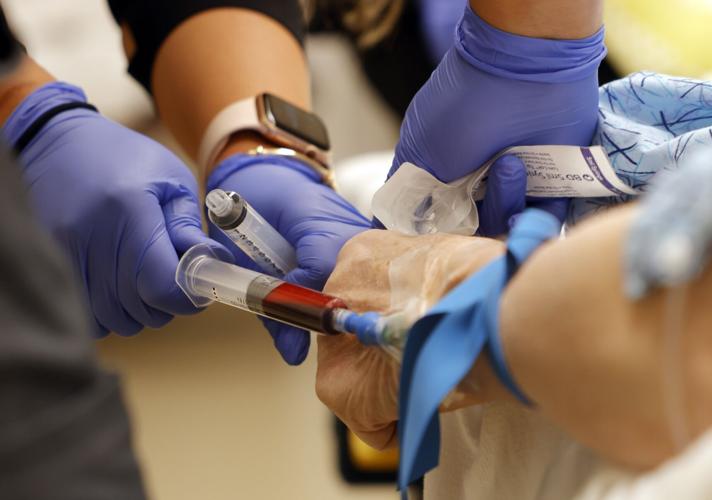 Nurses draw blood from a patient at Saint Francis Hospital. In a recent three-day average, 1,578 COVID patients were hospitalized in Oklahoma, 66 of them children — a figure that has been steadily increasing since the state began releasing the data in July. 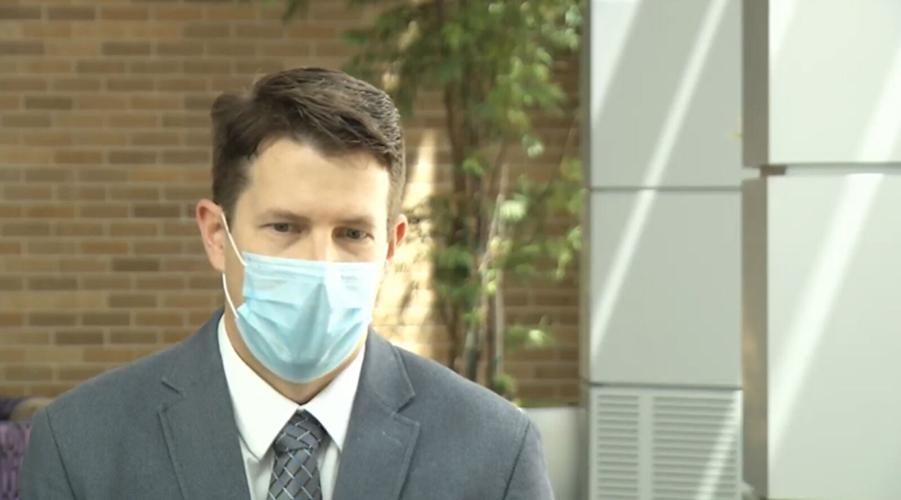 The state's average of new, confirmed cases increased 41% over the last two weeks, up 831 from 591, according to state data. 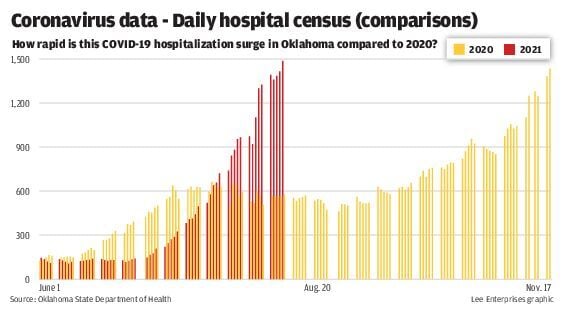 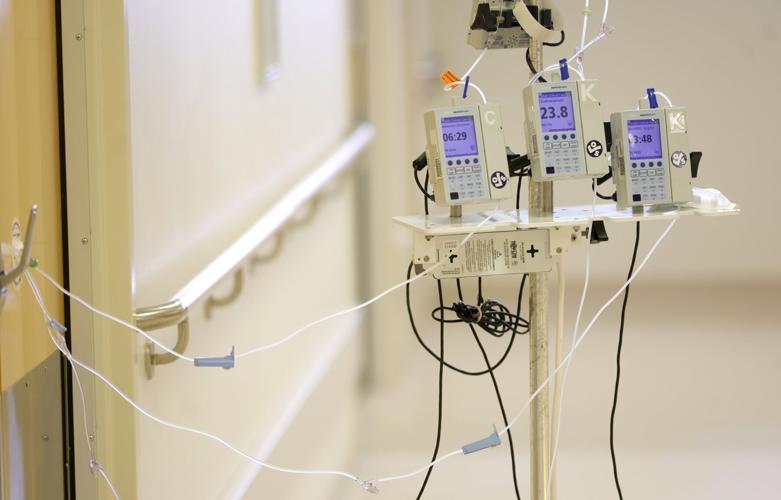 Medicine and IV pumps are strung outside the door of a COVID patient’s room on a COVID unit inside Saint Francis Hospital in Tulsa on Wednesday, June July 28, 2021. Nurses working on this unit can monitor the administration of medicine and make prescribed changes from outside the room without needing to don protective gear and enter the patient’s room.

Oklahoma is at a turning point. Each COVID infection results in an average of almost four more cases; that’s the most since the pandemic began and comparable to the chicken pox virus.

“We have doubled the transmission rate” in two months, according to Dr. Aaron Wendelboe, a University of Oklahoma epidemiologist. “We’re going in the completely opposite direction,” he said Friday.

With hospitalizations projected to peak soon, a rise he said was much faster than past surges, he’s not yet forecasting the worst — but Oklahomans are only about halfway to the kind of vaccination rates that can make a real difference.

If Oklahomans continue the past month’s increasing pace of new vaccinations, we could reach Wendelboe’s ideal rate for community immunity within six months. It could take months longer if we slow down, or we could be talking about herd immunity by the holidays — if Oklahoma returns to late-spring levels for new vaccine doses.

“Cases may continue to rise in the state, but less people get hospitalized once about 50% of the population is fully vaccinated,” Frye said. “We just want to keep pushing — really encouraging — everyone to get vaccinated so that we can keep those people out of the hospital.”

Oklahoma still ranks among the bottom for cumulative vaccinations in the U.S.

“We actually need to get up to closer to 85% vaccination in order to really make that huge difference,” Wendelboe said Friday. “Fifty percent just isn’t enough.”

His model shows the hospitalization surge will most likely will come in under the previous peak, though the record 1,995 COVID inpatients reported in late December could still be surpassed.

A couple key factors are conspiring: More non-COVID patients are in hospitals and the delta variant is the most contagious version of the virus yet.

In late July, Wendelboe’s model had indicated a hospitalization peak in late September, but that’s been moved up a month as the virus’s transmission rate has increased each week — nearly 20% higher now than in late July.

One likely scenario is a “relative steep decline in cases before the cold weather hits us,” the former state epidemiologist said, adding he was surprised taking back-to-school into account didn’t make as big an impact on his model as he had thought it would.

COVID patients in intensive care units comprised 27%, or 398 of the hospitalizations statewide.

Vaccines have done well so far to protect the most vulnerable people, according to Wendelboe, while also offering a level of protection to limit transmission among families and workplaces.

But understanding that COVID “likely is going to be with us a very long time,” he said the easiest mitigation measure of masking will allow for the more-normal life that people crave.

“The more that we as a population use that mask, then it really allows us to do everything else that we want to do — going to school, traveling,” Wendelboe said.

Four Oklahoma City hospital systems banded together last week to describe their situations as overwhelming, unmanageable, dreaded, nightmarish and dire. The COVID surge has dramatically affected nearly all hospital services and can hinder the time-sensitive care needed in instances such as heart attacks, strokes or emergency surgeries.

Wendelboe said one of his loved ones who had surgery returned to the ER and had to wait hours in a hallway while in extraordinary pain because of the lack of providers.

“I really hope that you or your loved ones don’t get in a car crash or have a heart attack or get a stroke,” he said his message would be to those who don’t want to hear about COVID. “When a hospital is full, it’s full. And we are just in a very tense situation right now.”

Bruce Dart, Tulsa Health Department’s executive director, said in a media briefing Thursday with local officials that he and his colleagues empathize with so many who are sad, tired, frustrated and worried.

Dart called it “daunting” to know that more is required of each individual to end the pandemic but repeatedly emphasized that the safe, effective and free vaccines are the best way out.

He said “absolutely we need to be masked, too” because of the delta variant, along with avoiding crowds and hand hygiene. If we adhere to precautions, he said we can stay safe and begin talking about what the new normal really looks like.

“We have to slow this down, and if we don’t slow this down we’re going to be talking about dealing with COVID forever,” Dart said. “Now remember, COVID is here. It’s endemic. It’s never going away.”

In conveying how contagious the delta variant is, Wendelboe suggested that it might be helpful to view it as COVID-21 rather than COVID-19.

“This is really essentially a new virus, and it’s like dealing with a new flu strain each year,” Wendelboe said. “This happens to be a really infectious strain that we’re dealing with.”

Wendelboe said he hasn’t yet built into his model the mRNA vaccine third-dose program recently announced by the CDC. Those boosters may begin as early as Sept. 20.

As for this fall and winter, Dart said COVID-19 spreads quite well indoors but doesn’t do so well in the face of a layered approach: vaccination, masking, physical distancing and handwashing.

“We know the potential for circulation once winter comes is going to increase,” Dart said. “We also know, for example, last year our flu season wasn’t near as bad. And we really strongly believe it was because people were masked up.

“We know that that safety mechanism does work, so you combine that with the other three strategies and I think this winter we can keep people fairly safe if we all come together and we all take the right steps to stay safe.”

"We actually need to get up to closer to 85% vaccination in order to really make that huge difference. Fifty percent just isn't enough."

18-year-old Saffron Durham died Tuesday afternoon when her SUV hit the back of another vehicle near Ketchum.

With the Legislature having outlawed abortion in almost all instances in the state, Oklahomans might get a chance to legalize abortion themselves through a state question.

Father Bryan Brooks, pastor at the Church of St. Benedict in Broken Arrow, is planning to pray at another 22 executions the state has planned in the next two years.

The wreck occurred after 3 p.m. Friday on US Highway 177 near E 840, southbound approximately one mile south of Carney, Oklahoma.

Two of the crashes the Oklahoma Highway Patrol worked yesterday were fatal.

Mother pleads guilty to murdering two children, wounding another in 2018

A woman from the Nuyaka area of Okmulgee County pleaded guilty Monday in a deal that calls for her to serve life in prison for murdering two of her children and wounding another in 2018.

In preparation for a book on Indigenous rights, Rebeca Nagle made her first request Oct. 22, 2021. No records have been provided. Nagle’s work, including a podcast The Land, often focuses on tribal sovereignty.

OSBI preliminary investigations found that the four people "executed" at a marijuana grow facility in Kingfisher County were Chinese nationals.

China's protests over lockdowns spread to campuses and communities abroad

China's protests over lockdowns spread to campuses and communities abroad

Nurses draw blood from a patient at Saint Francis Hospital. In a recent three-day average, 1,578 COVID patients were hospitalized in Oklahoma, 66 of them children — a figure that has been steadily increasing since the state began releasing the data in July.

The state's average of new, confirmed cases increased 41% over the last two weeks, up 831 from 591, according to state data.

Medicine and IV pumps are strung outside the door of a COVID patient’s room on a COVID unit inside Saint Francis Hospital in Tulsa on Wednesday, June July 28, 2021. Nurses working on this unit can monitor the administration of medicine and make prescribed changes from outside the room without needing to don protective gear and enter the patient’s room.