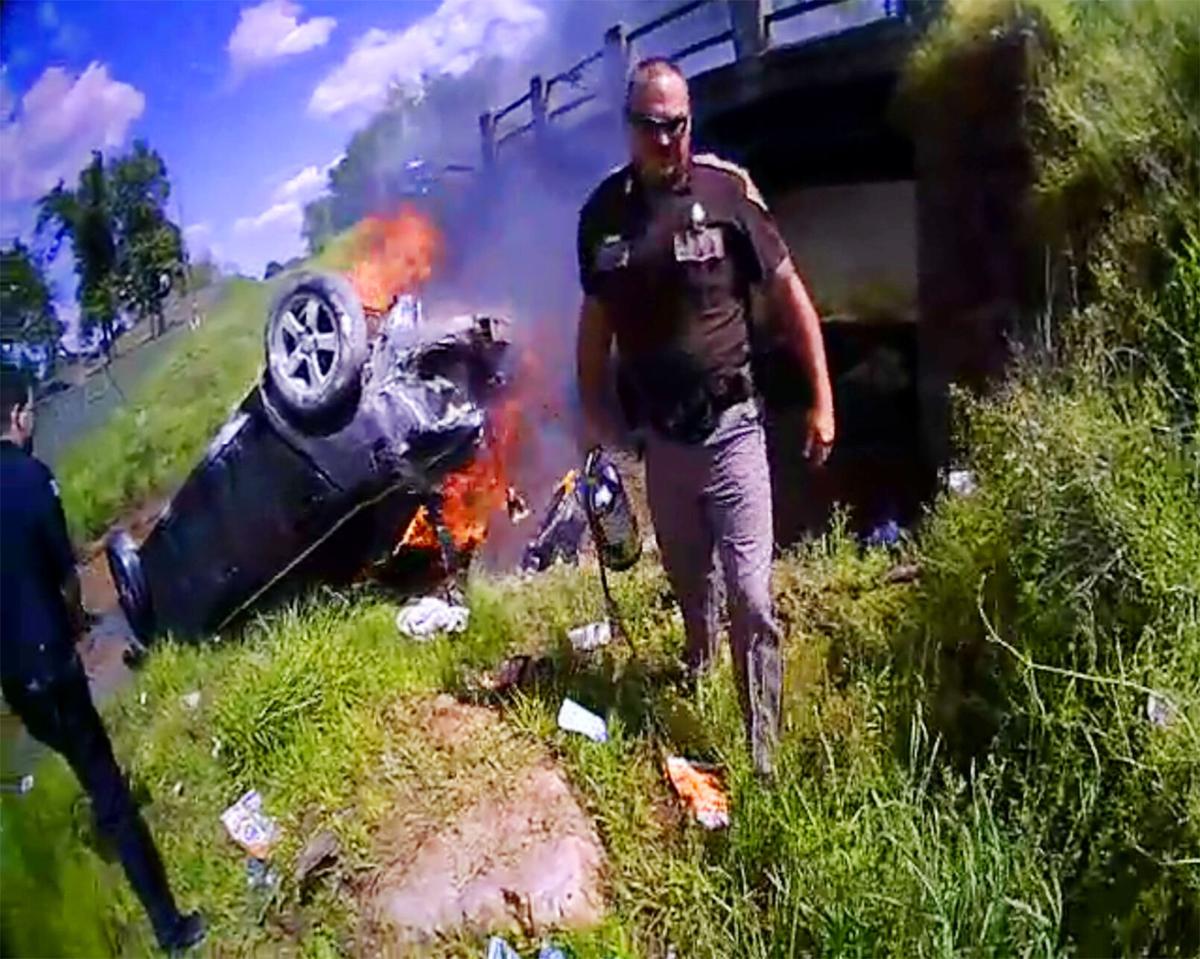 An image pulled from video shows the fiery wreckage after a trooper performed a TVI on a fleeing vehicle that caused it to crash into a concrete bridge railing and roll over, killing Joshua Kyle Priest, 33, the eluding driver, and Nicole Ann Stephens, 30, his passenger. 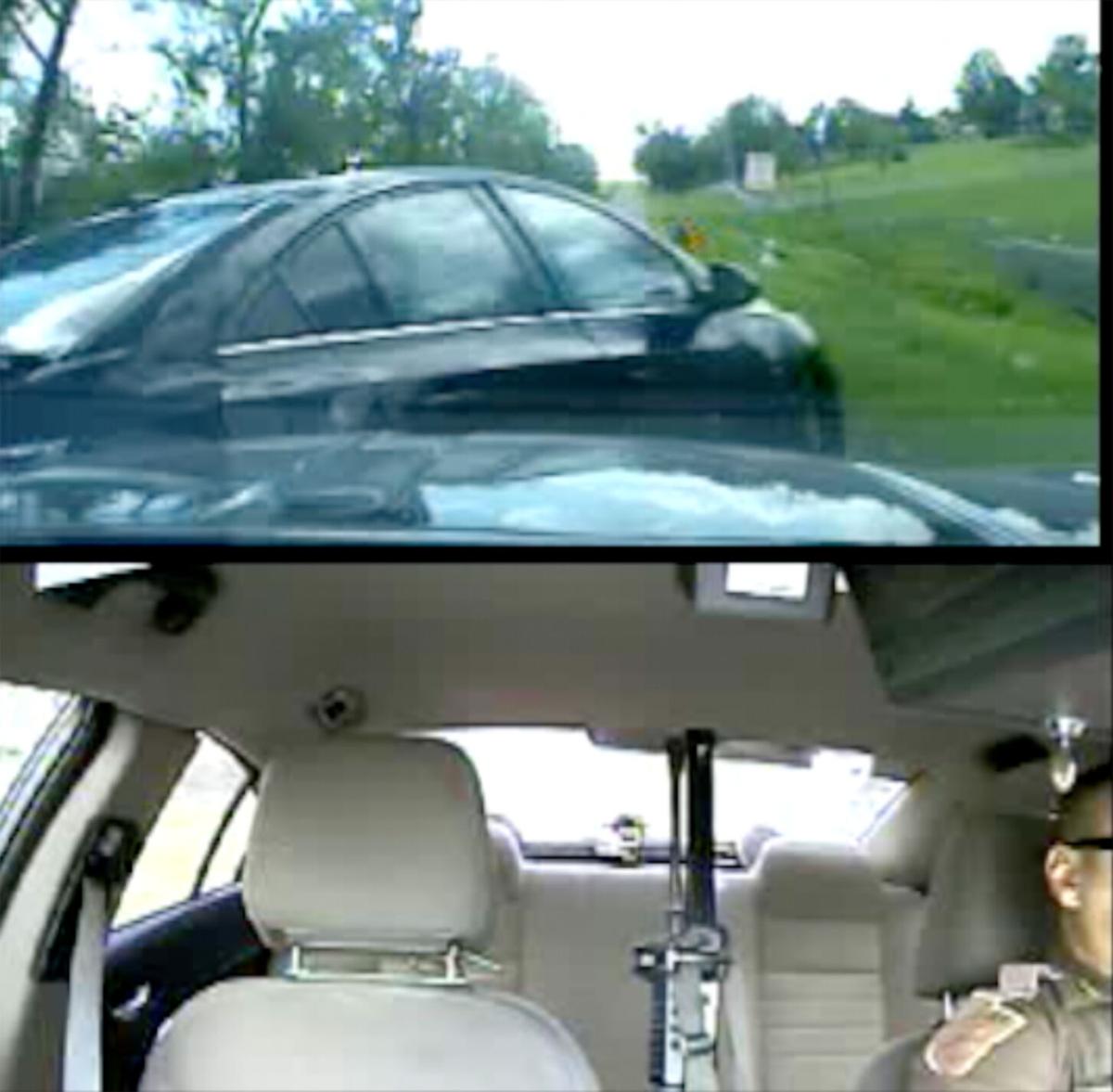 About three seconds before a trooper began the TVI that killed two people in a fleeing car, his dashboard video shows an unobstructed view of a bridge and bridge abutment for about three seconds on a downslope.

The location of a fatal TVI in Creek County was the lone concern noted in the informal or preliminary review by Oklahoma Highway Patrol command staff three months after the fiery crash in April 2020. 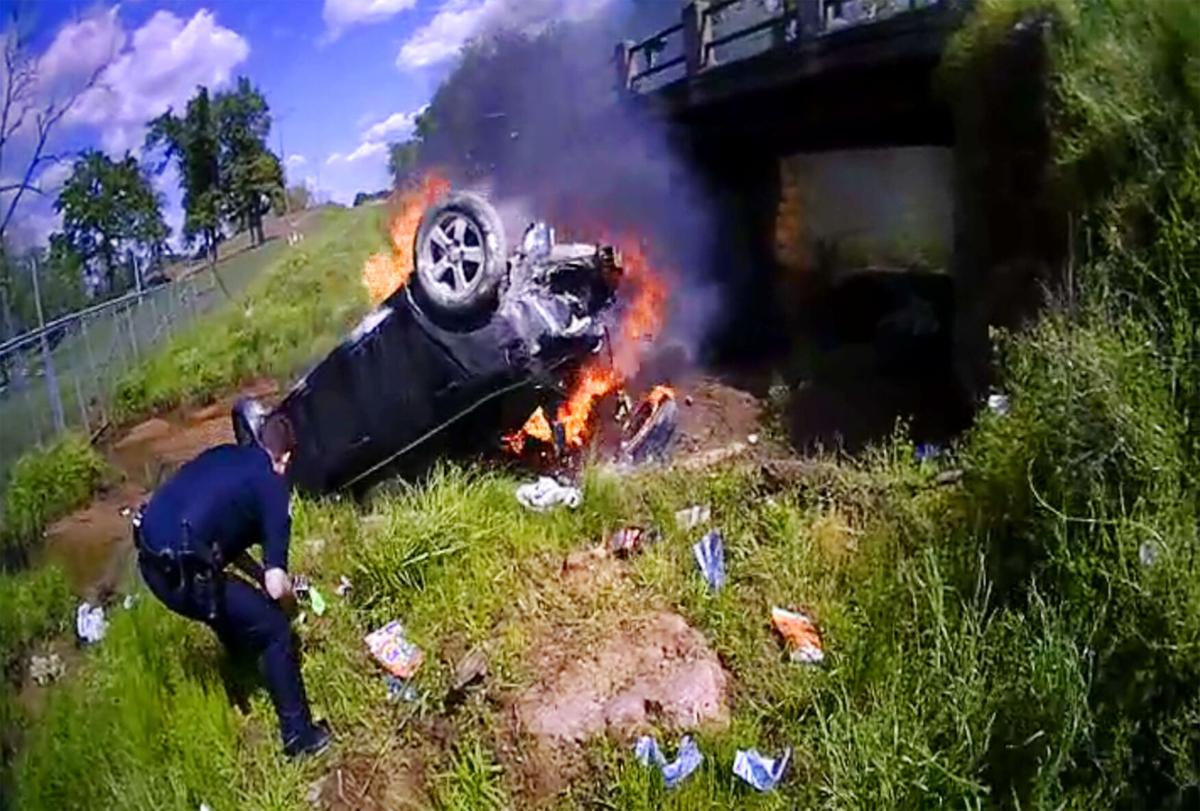 A crash in April 2020 ended a trooper's high-speed pursuit on unfamiliar roads in Creek County. An accompanying sheriff's deputy reportedly had "notified (the trooper) of the hazards anytime the pursuit traveled on a particularly dangerous portion of the roadway."

The passenger showed “a look of fear” as she braced herself in a car that was fleeing from a state trooper who had tried to pull over the driver for a speeding violation.

The trooper had just spun out the car into a ditch in rural Creek County after hitting its rear corner to try to end the high-speed chase. A sheriff’s deputy providing backup later reported observing the frightened female passenger as the male driver smiled and laughed before taking off again.

That moment became the final time in which anyone saw either of them alive.

OHP Trooper Darren Potter said he knew a passenger was also inside the fleeing car, according to records, well before he performed a tactical vehicle intervention. In an oversight document, commanders didn’t share any concerns about the use of a risky TVI, with knowledge that a passenger’s life was also at stake, when a speeding infraction was the only known offense.

Potter had clocked Joshua Kyle Priest’s speed at 88 mph in a 75 mph zone on April 29, 2020. Priest, 33, and Anna Nicole Stephens, 30, were killed 15 minutes later after Potter used the TVI to spin out the fleeing car at speeds fast enough to be deadly.

Potter almost wrecked, himself, but the fleeing car crashed, rolled into a creek and burst into flames, which couldn’t be put out with fire extinguishers.

OHP’s pursuit policy doesn’t specifically address nor offer guidance for when — or when not — to attempt a TVI if other occupants are inside an eluding vehicle.

Two national policing researchers and strategists say vehicular chases shouldn’t even happen unless a violent crime is involved — and eluding itself doesn’t count.

A matter of seconds

More than 14 months after a request for Potter’s dashcam footage of the crash, OHP provided video when Tulsa World offered notice of plans to publish an article.

Creek County Sheriff’s Office released its deputy’s body-cam video when the newspaper first asked for it.

Before Potter began the fatal TVI, his dashboard video shows an unobstructed view of a bridge and bridge abutment for about three seconds on a downslope.

His cruiser made contact with the right quarter panel of the fleeing car about two seconds before it slammed directly into the abutment at a perpendicular angle on Priest’s side. Potter reported that he nearly crashed after losing control of his cruiser on pavement as he swerved to avoid hitting the abutment. The dash footage shows him fish-tailing over the bridge and then spinning nearly 180 degrees.

Six days later, Potter told internal investigators he didn’t see the bridge hazards before doing the TVI, according to a summary of his internal interview.

The TVI’s location was the lone concern noted in the informal or preliminary review by command staff three months after the fatal maneuver, according to records provided upon filing of litigation by Tulsa World. The nine commanders by “unanimous consensus” recommended not elevating the case to a formal evaluation by a Chief’s Review Board; no policies were violated, they agreed.

Instead, the commanders passed along their concern about the maneuver’s location to the OHP training division to see if Potter needed a “refresher” on TVIs. There, a lieutenant wrote that Potter acted in accordance with training, policy and law.

“Potter had no way of knowing that this change of terrain was occurring or that the pursuit was approaching the bridge, as he was already in the process of making contact with the suspect’s vehicle,” wrote Lt. Clay Fredrickson.

‘So many good reasons not to do this’

The OHP training review memo cited a U.S. Supreme Court case to say that an officer’s attempt to end a high-speed chase that threatens bystanders isn’t a Constitutional violation, even if the fleeing motorist’s life is put at risk.

In the Creek County instance, Stephens’ life — the passenger — also was at risk, not just the driver.

“The suspect, Joshua Priest, failed to comply with the traffic stop and had numerous opportunities to pull over and end the pursuit,” Sarah Stewart, OHP spokesperson, wrote in an email in response to submitted questions.

Chuck Wexler is the leader of Police Executive Research Forum, a Washington, D.C.-based independent think tank of law enforcement officials whose first guiding principle for officers is the sanctity of human life.

Wexler said the decision to chase for a nonviolent crime or traffic infraction becomes “all the more a bad decision” when an officer chooses to perform a risky TVI even with a passenger inside the fleeing vehicle.

“Now you’re not only endangering the driver, but this other passenger,” Wexler said. “There’s so many good reasons not to do this.

“I’m hard-pressed to find one good reason that anyone has made in 20 years to justify taking a life unless you’re talking about preventing a violent crime — then the risk can be better measured.”

Geoffrey Alpert, a University of South Carolina professor who researches high-risk police activities, said it’s crucial for officers to consider the risks to life and limb of passengers in fleeing vehicles before deciding to spin out the car.

For example, he said, it’s one thing if you know there were two people who robbed a bank at gunpoint and two people are in the fleeing car. But it’s something else if you know one person was involved and there are three people in the car.

“I’m not saying it is or isn’t (worth the risk), I’m just saying those decisions need to be made prior to putting a cop in such incredible distress to make those decisions in the heat of the chase,” Alpert said.

Cook wrote in a letter to OHP that the TVI appeared to be justified because the pursuit “presented a danger to the people and property in proximity to Mr. Priest as he is attempting to elude.”

Oklahoma Highway Patrol protocols leave opportunities for gaps in reporting and documentation that invite questions about accountability and transparency.

Neither a pursuit report nor an administrative investigation form documenting the chase and fatal TVI were done. Both of those documents had been filled out two months earlier for a TVI in Wagoner County that rolled an eluder in a stolen vehicle, inflicting critical injuries that the driver ultimately survived.

Stewart in an email said command staff did review the Creek County case — she didn’t address the absence of an administrative investigation form — and expressed thanks for pointing out the lack of a pursuit report.

Potter, who was working speed enforcement April 29, 2020, attempted a traffic stop for the Chevrolet Cruze observed going 13 mph over the limit.

His “suspicion grew” when the car took longer than normal to pull over and stop, and because its paper tag looked like it hadn’t been filled out completely, according to his internal interview summary.

After Potter exited his cruiser, the driver reportedly sped off, weaving through light traffic and reaching speeds around 90 mph. Potter said he saw the passenger throw something out of the window during the chase.

The trooper acknowledged being unfamiliar with the roadways in the area and said he didn’t see the bridge until after the car already was spinning in front of him.

“The deputy notified Potter of the hazards anytime the pursuit traveled on a particularly dangerous portion of the roadway,” according to the summary of Potter’s interview. “Potter believed he would not have been as successful in the pursuit if the deputy had not been calling it for him.”

Investigators say they found a loaded handgun, as well as mushrooms in plastic bottles in the creek near the wreck.

OHP policy states that pursuits must be done in a way to “promote the safety of all persons” and “effective use” of agency resources. Troopers must weigh the hazards of a pursuit against the benefits of apprehension and “immediately” stop chasing when dangers become greater than the value of apprehension “based on the known offense(s).”

More in this series

At least eight of those killed weren’t the eluding drivers. Five were uninvolved motorists, at least two were passengers in fleeing vehicles, and one was a Highway Patrol lieutenant on foot struck by another trooper’s cruiser at high speed.

There could be up to two more passengers inside fleeing vehicles who were killed in separate chases, but OHP won’t say whether the deceased juveniles were the eluder or an occupant.

Oklahoma’s ranking in law enforcement pursuit-related deaths per capita was 11th highest in the nation from 1996 to 2015, according to a U.S. Department of Justice report published in 2017. The state ranked No. 5 worst in the U.S. from 2016 to 2019, according to a Tulsa World analysis of National Highway Traffic Safety Association data.

An image pulled from video shows the fiery wreckage after a trooper performed a TVI on a fleeing vehicle that caused it to crash into a concrete bridge railing and roll over, killing Joshua Kyle Priest, 33, the eluding driver, and Nicole Ann Stephens, 30, his passenger.

About three seconds before a trooper began the TVI that killed two people in a fleeing car, his dashboard video shows an unobstructed view of a bridge and bridge abutment for about three seconds on a downslope.

The location of a fatal TVI in Creek County was the lone concern noted in the informal or preliminary review by Oklahoma Highway Patrol command staff three months after the fiery crash in April 2020.

A crash in April 2020 ended a trooper's high-speed pursuit on unfamiliar roads in Creek County. An accompanying sheriff's deputy reportedly had "notified (the trooper) of the hazards anytime the pursuit traveled on a particularly dangerous portion of the roadway."