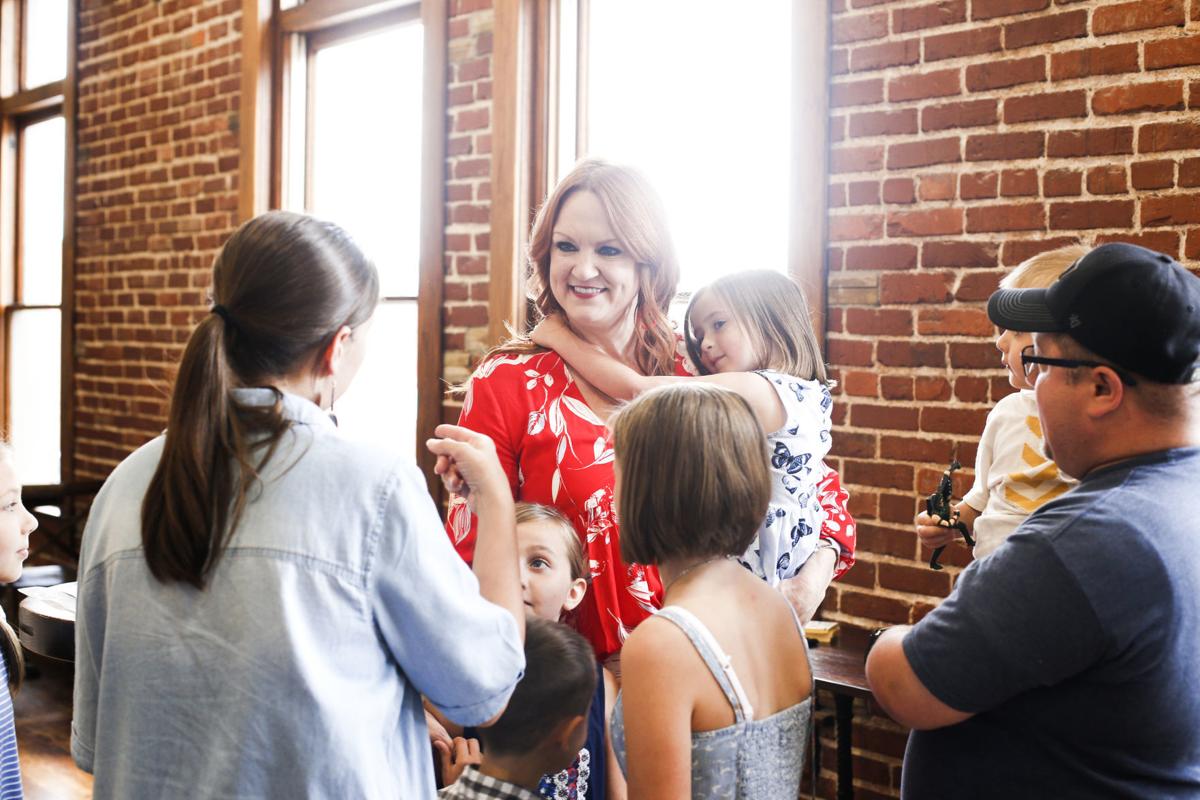 Ree Drummond talks to a family at the Mercantile during the city’s Fourth of July celebration last week. Drummond’s store, hotel and restaurant have spurred economic revival for the once-quiet town. MORGAN HORNSBY/Tulsa World 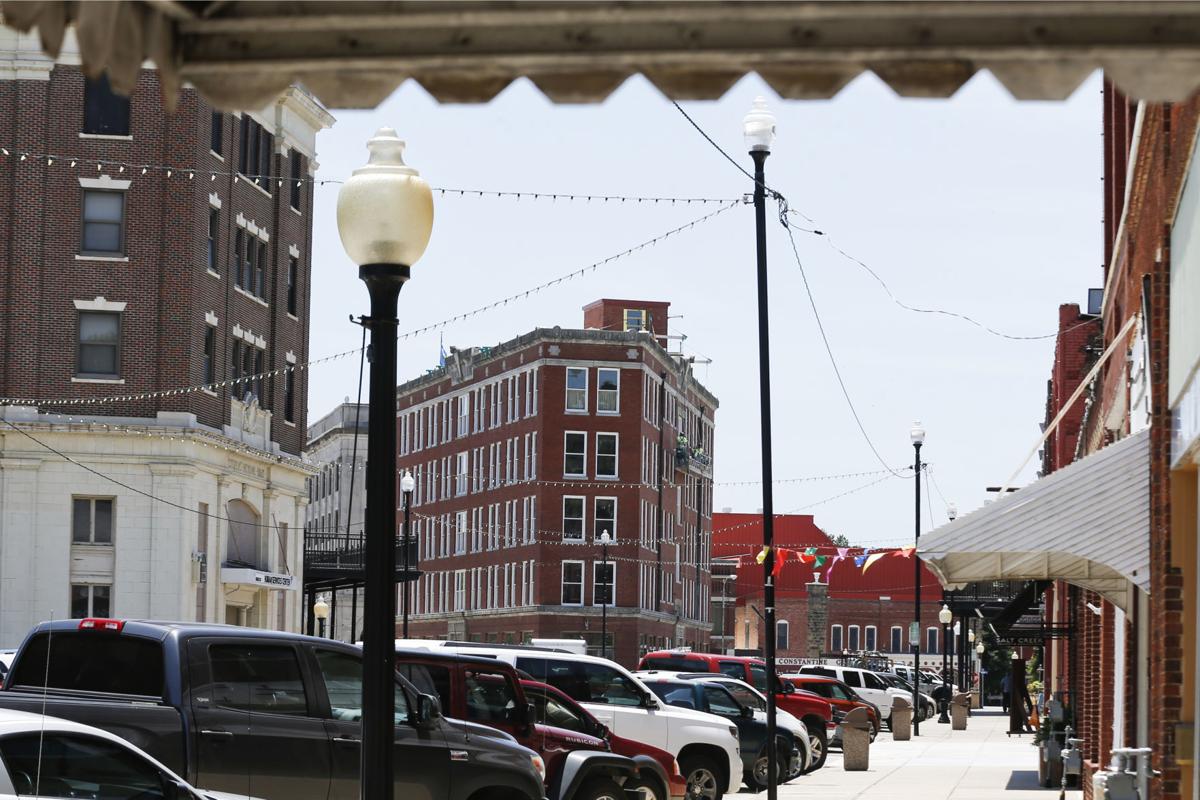 The historic Triangle Building in downtown Pawhuska has been transformed into a boutique hotel by Tulsa developer Brickhugger LLC. Tulsa World file 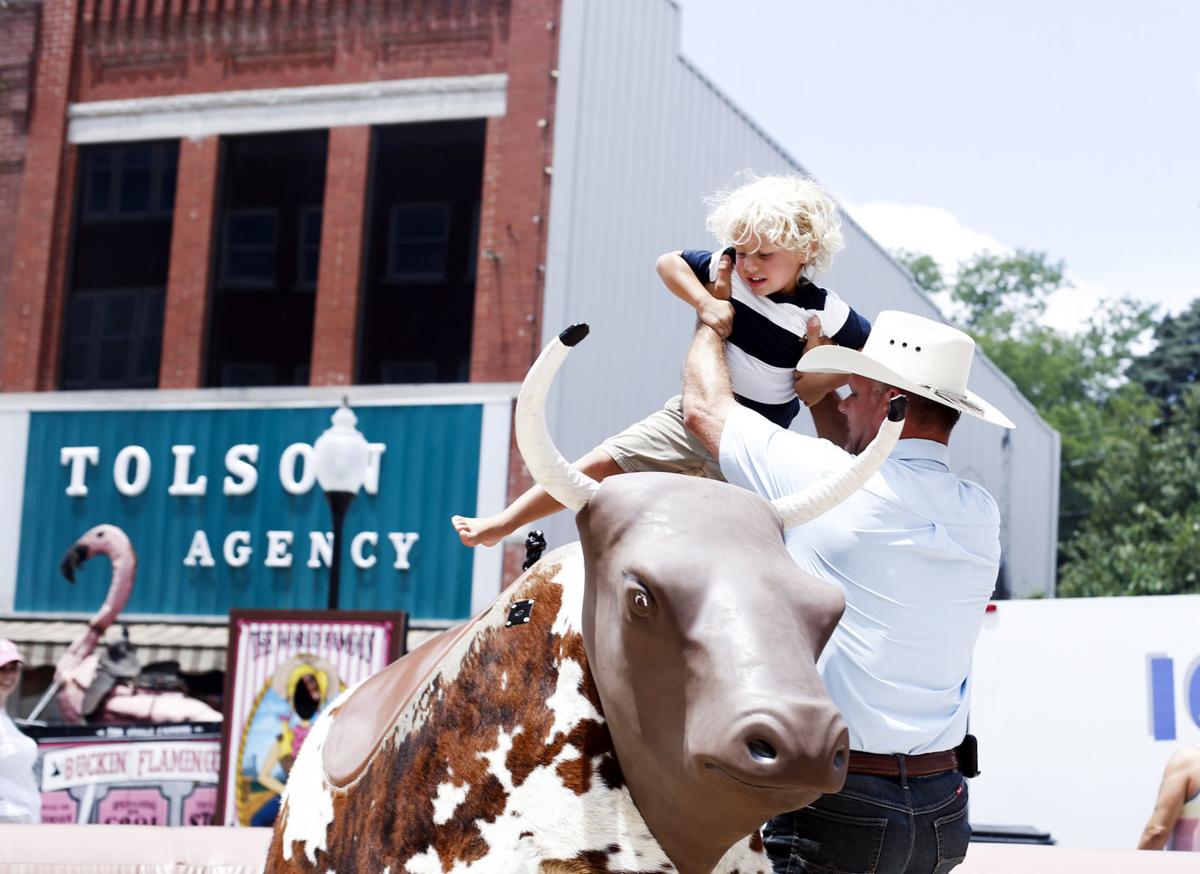 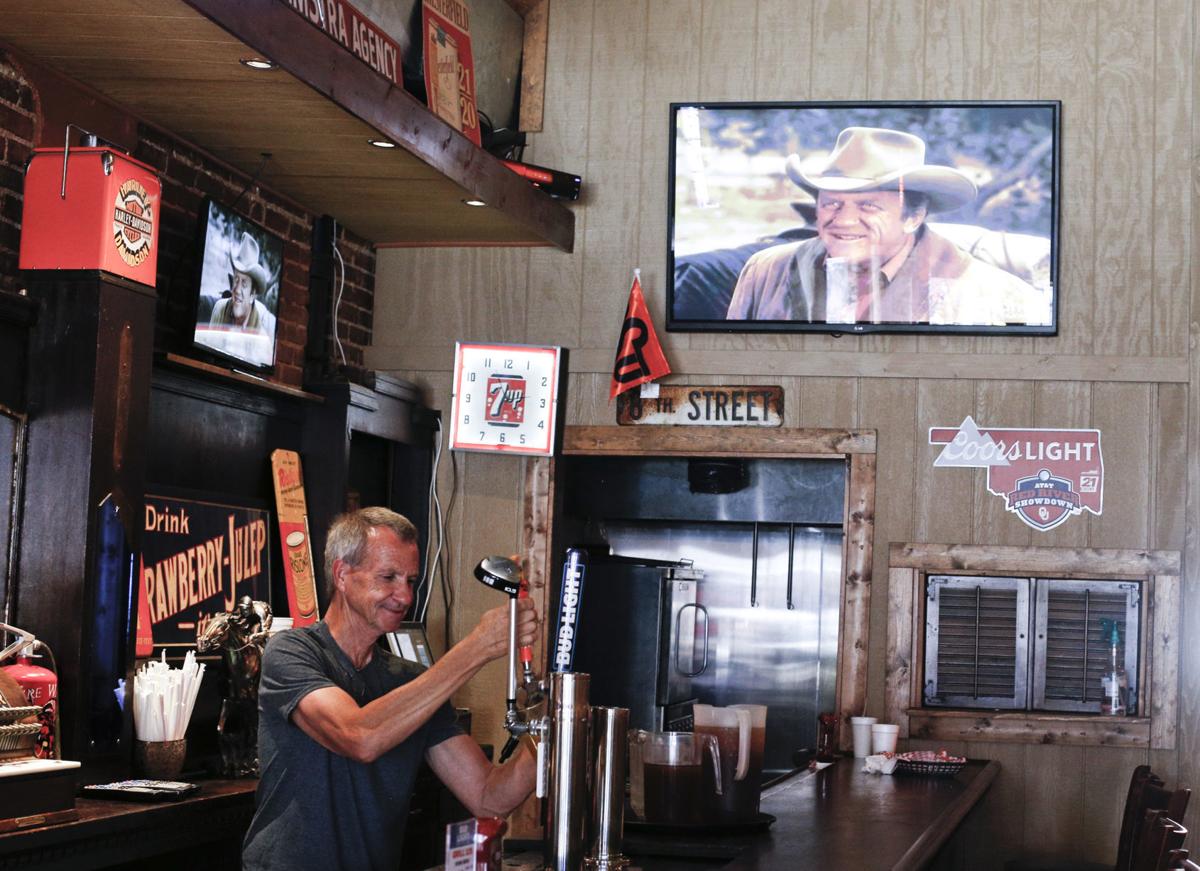 Business continues at a small-town bar as renovations are made at the Triangle Building in downtown Pawhuska. MORGAN HORNSBY/Tulsa World 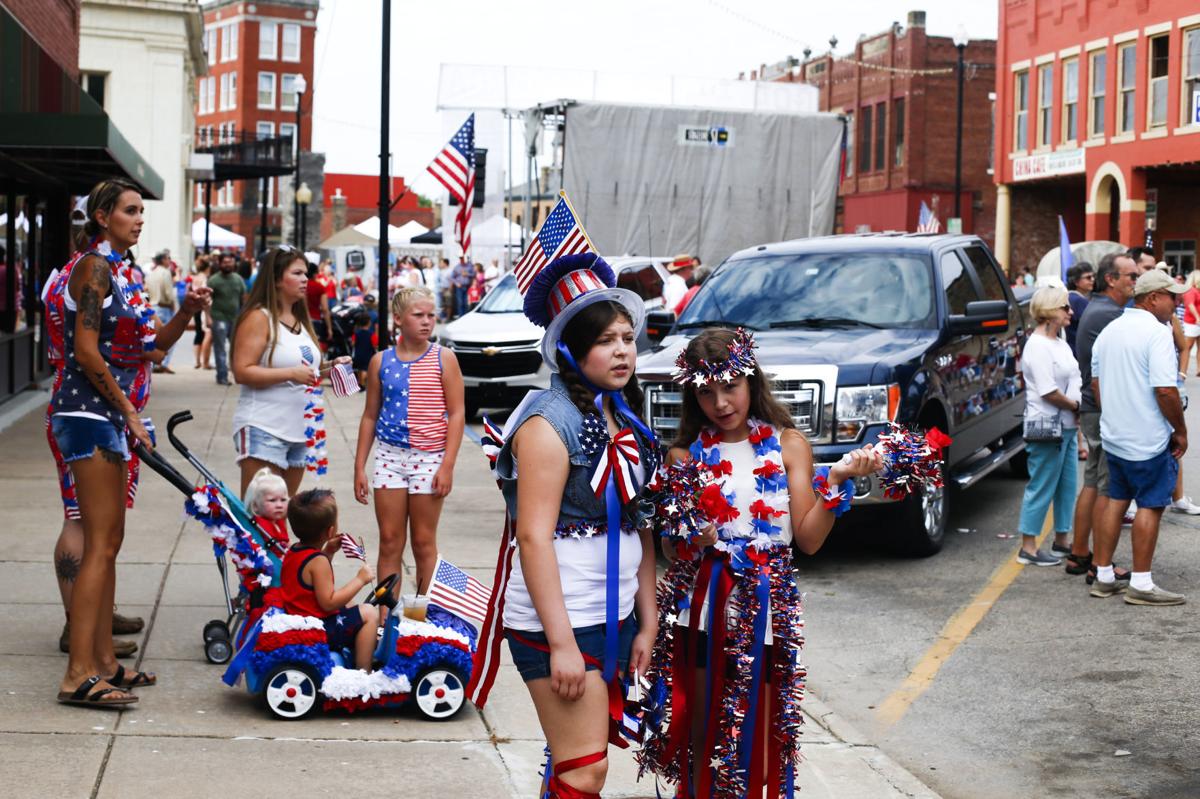 PAWHUSKA — Before there was Ree Drummond’s Pioneer Woman, there were pioneer men, Pawhuskans such as the Tolsons.

Having heard lots were for sale in soon-to-be-Oklahoma, Strat Tolson’s granddaddy left a small plantation and business in Gadsden, Ala., and in 1905 established the Tolson Agency, a real estate and insurance firm in the Osage County seat.

The family company is still kicking, as is the 96-year-old Strat Tolson, whose recollections are as rich as the soil once was in oil.

Where the famed Triangle Building stands today on Pawhuska’s Main Street, he says, was formerly a holding pen for livestock.

“Everybody in town had milk cows, so they would bring them down in the morning and put them in that little enclosure,” says Tolson, relating history passed down from kinfolk. “My father and two or three other boys his age would take them out west and graze them and bring them back. Then the owner would come down in the evening, get his milk cow and take it back.”

Down the street, the western swing band Bob Wills and the Texas Playboys was a regular at Whiting Hall during the 1950s and ’60s.

“It had the best dance floor in Pawhuska,” Tolson says. “Those were days before central air conditioning, so all the windows were raised.

“The music would just waft out across the town. We lived up on the hill. I always remember lying in bed and Bob Wills music drifting over us.”

Around that same era, the local chamber of commerce would sponsor a Christmastime promotion, toting 30 to 40 turkeys to an open third-floor window of the Triangle Building.

“By that time, this area out here would be full of people,” Tolson says. “They would throw those turkeys out, live turkeys. Some of them would just fall. Some would just put their wings out, and they would coast for a block or two. People would be running around after them.”

The ritual was grounded after three or four years, he says.

“The Humane Society got wind of it and shut ’em down because several turkeys were torn in two by people getting a leg here and a leg there,” Tolson says.

Although for less infamous reasons, the town still draws crowds — and they are bigger and more-traveled than ever before. A recent check of a local parking lot on a Monday revealed license plates from eight states outside Oklahoma: Iowa, Kansas, California, Missouri, Texas, Georgia, Louisiana and Arizona.

The lure is Drummond and the homespun commercial kingdom she has created.

The Bartlesville native founded the Pioneer Woman blog, which chronicles her life as a ranch wife and mother, in 2006. Since then, her popularity has soared through books, television shows and her photography. In Pawhuska, lines routinely a block long form outside the 25,000-square-foot Pioneer Woman Mercantile, a bakery, restaurant and retail space she and her rancher-husband, Ladd Drummond, opened in 2016.

Toting sacks of Mercantile merchandise in late June were 41 members of the American Spirit Club, a 55-and-older group from northwest Iowa. Coordinator Loreen Marra and other members memorialized their eight-hour bus ride by posing on steps off Kihekah Avenue.

“We watch (“Pioneer Woman”) on TV, and a lot of us are enthralled with the whole ordeal and love the renovation that’s happening,” Marra said. “We’ve been treated very well.”

The Drummonds opened The Boarding House, an eight-room upscale hotel, in downtown Pawhuska in April, and the family’s most recent commercial addition is P-Town Pizza. Coming later this year is a steakhouse and saloon courtesy of the Pioneer Woman franchise.

In addition, Tulsa developer Brickhugger LLC is transforming the Triangle Building into a 20-room boutique hotel.

“It’s just the tax revenue that’s coming through with her (Ree Drummond’s) business ventures,” says Randi Chesbro, treasurer of the Pawhuska Merchants Association. “It has helped the city enormously to have funds to fix infrastructure, sidewalks. I would say that’s the biggest boost.”

Chesbro’s business, an antiques and collectibles store called Sister’s Attic, sits in a building across the alley from the Merc. Having a celebrity as a neighbor has caused Chesbro’s revenues to double, even triple, she says.

“We’re having busloads of people come to town,” she says. “I say there must be 500,000 little widowed women in Kansas. But they are so enthusiastic, and they are so fun to have.

“We travel some. But I don’t care where we go — North Dakota, Michigan, Minnesota, wherever — if you mention Pawhuska, immediately they know where you’re talking about.”

The Tolson Agency, which spent 49 years in the Triangle Building, is now located in an office across the street from Kihekah Avenue. Strat Tolson and his brothers Mel, 88, and Ralph, who died in 2012, worked side-by-side in the family business for three decades.

Current majority owner Steve Tolson, Ralph’s son, was an accountant at General Electric in Dallas before assuming the reins of the firm, which is advertised as the oldest continuously operated business in Osage County.

“I moved back here in ’87,” Steve says. “And for 30 years, I would look out the front of this office and see the vacant Triangle Building. I was a proponent of tearing it down. I didn’t see a use for it.

“I didn’t see that the town would bounce back like it has. They have proved me wrong.”

By 1920, near the peak of the Osage oil-field production, Pawhuska boasted a population of about 6,400. Nearly a century later, that number is down to about 3,600.

But looking out his office’s window, Strat Tolson sees a community invigorated by new investment and fresh faces.

“We’re very happy about it. The town needed someone like them,” he says of the Drummonds. “And they have our admiration for it.

“They could have gone to Bartlesville or Tulsa or Ponca City. They came here and put their money where their mouth is. They’ve really saved our little town.”

Dr. Jennifer Clark said hospitals could encounter another “nightmare winter” if influenza hits hard: “Given the fact that we did not have a flu season last year, we’re at risk for having the classic twindemic they’ve been talking about."

COVID-19 surge starts sooner than projected, but not expected to be worse than delta wave, OU epidemiologist says

"The question is just how high are those hospitalizations and cases going to go," said Dr. Aaron Wendelboe, a University of Oklahoma epidemiologist. "As long as we don't have an emergence of a new variant, I don't think that the peak will be nearly as high was what we observed in August and September."

House Bill 1674, which was supposed to take effect Nov. 1, civilly and criminally protects motorists who injure or kill protesters who are blocking roadways if the driver was acting on the reasonable belief that fleeing was necessary for safety reasons and the driver exercises “due care.”

No. 13 OU hosts Iowa State: See all our coverage here

The victim is at least the second from Checotah to die in separate single-vehicle crashes on the road in little more than a week.

A 2012 Jeep was struck head-on just before 5 p.m. by a 2015 GMC pickup, according to a preliminary crash report from the Oklahoma Highway Patrol.

Despite his star power, Caleb Williams has always been a team before self type of guy

Bigler Jobe "Bud" Stouffer II filed his own legal challenge to the state's lethal injection procedure; his attorneys said they now will seek relief at the 10th U.S. Circuit Court of Appeals in Denver.

Stone said he learned about Lahmeyer from retired Gen. Michael Flynn, who also has a Trump-related (and pardoned) felony on his resume, and businessman Clay Clark, who is closely aligned with Lahmeyer's campaign.

Ree Drummond talks to a family at the Mercantile during the city’s Fourth of July celebration last week. Drummond’s store, hotel and restaurant have spurred economic revival for the once-quiet town. MORGAN HORNSBY/Tulsa World

The historic Triangle Building in downtown Pawhuska has been transformed into a boutique hotel by Tulsa developer Brickhugger LLC. Tulsa World file

Business continues at a small-town bar as renovations are made at the Triangle Building in downtown Pawhuska. MORGAN HORNSBY/Tulsa World 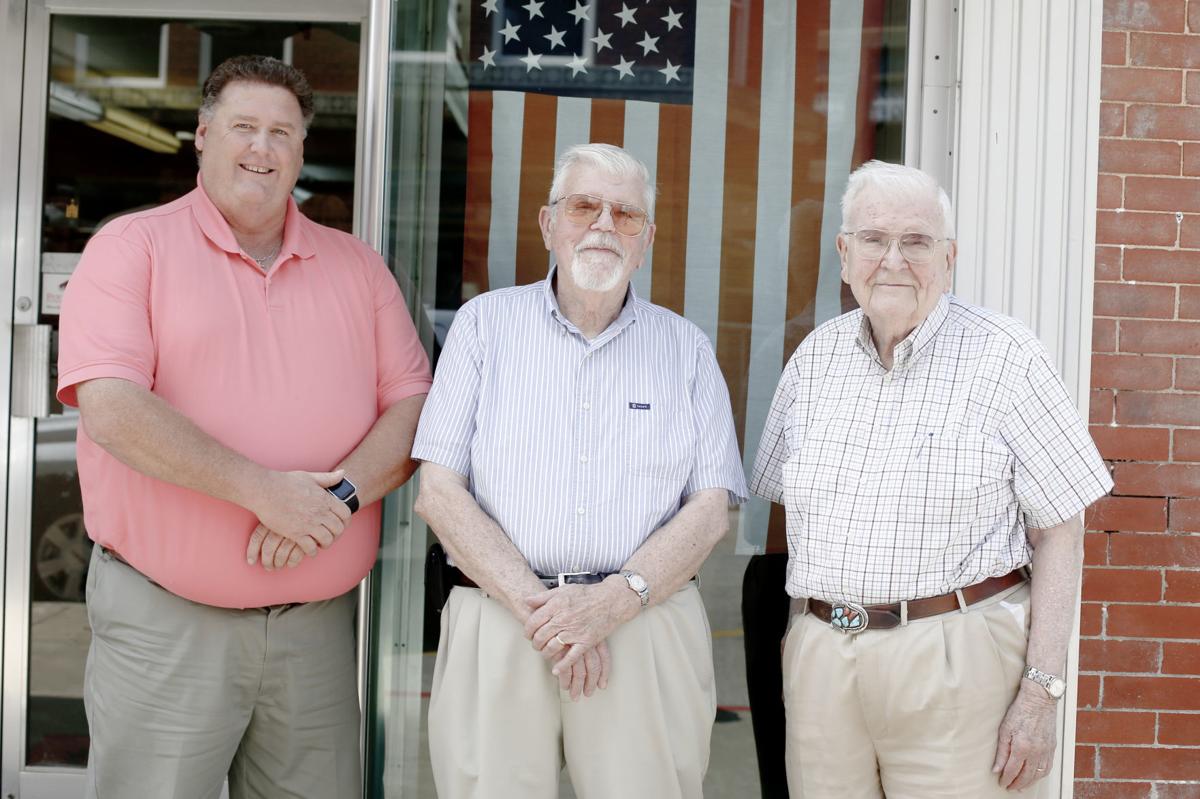 Steve, Mel and Strat Tolson stand together in front of the Tolson Insurance Agency. The agency has been in operation in Pawhuska since 1905. MORGAN HORNSBY/Tulsa World 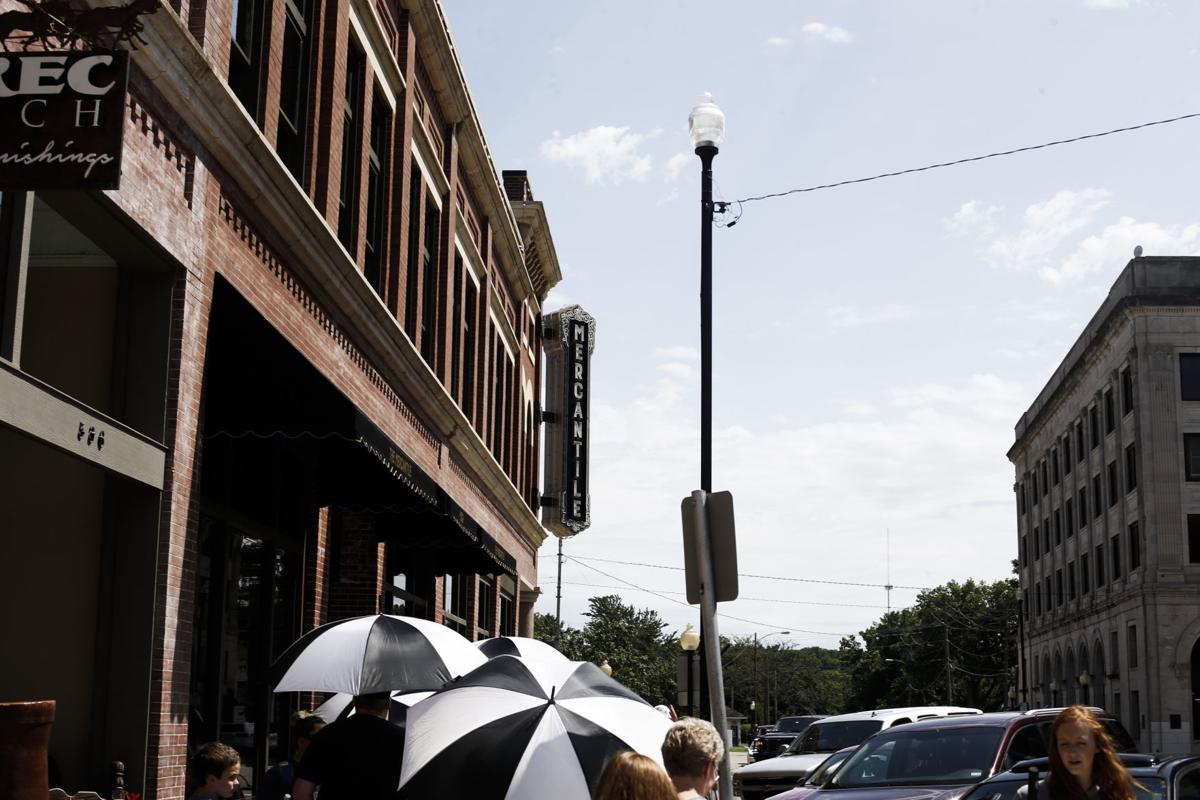 There is often a line at the Pioneer Woman Mercantile in Pawhuska, which has been booming since its most famous resident, Ree Drummond, has opened a store, restaurant and hotel. MORGAN HORNSBY/Tulsa World