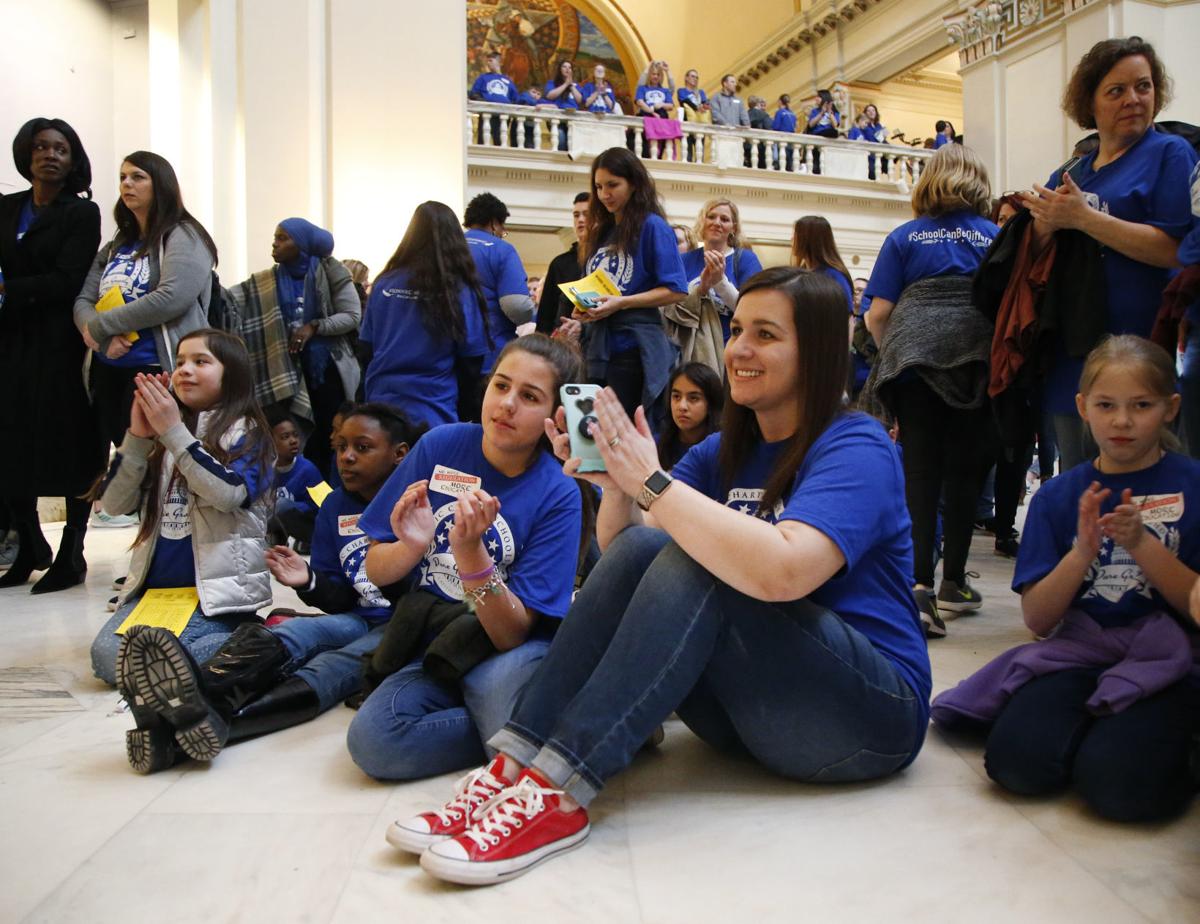 Carrie Pollard (foreground right) and her daughter, Brinly Crowe (foreground left), applaud at a rally during a lobbying event by Epic Charter Schools at the state Capitol in Oklahoma City on Monday. MATT BARNARD/Tulsa World 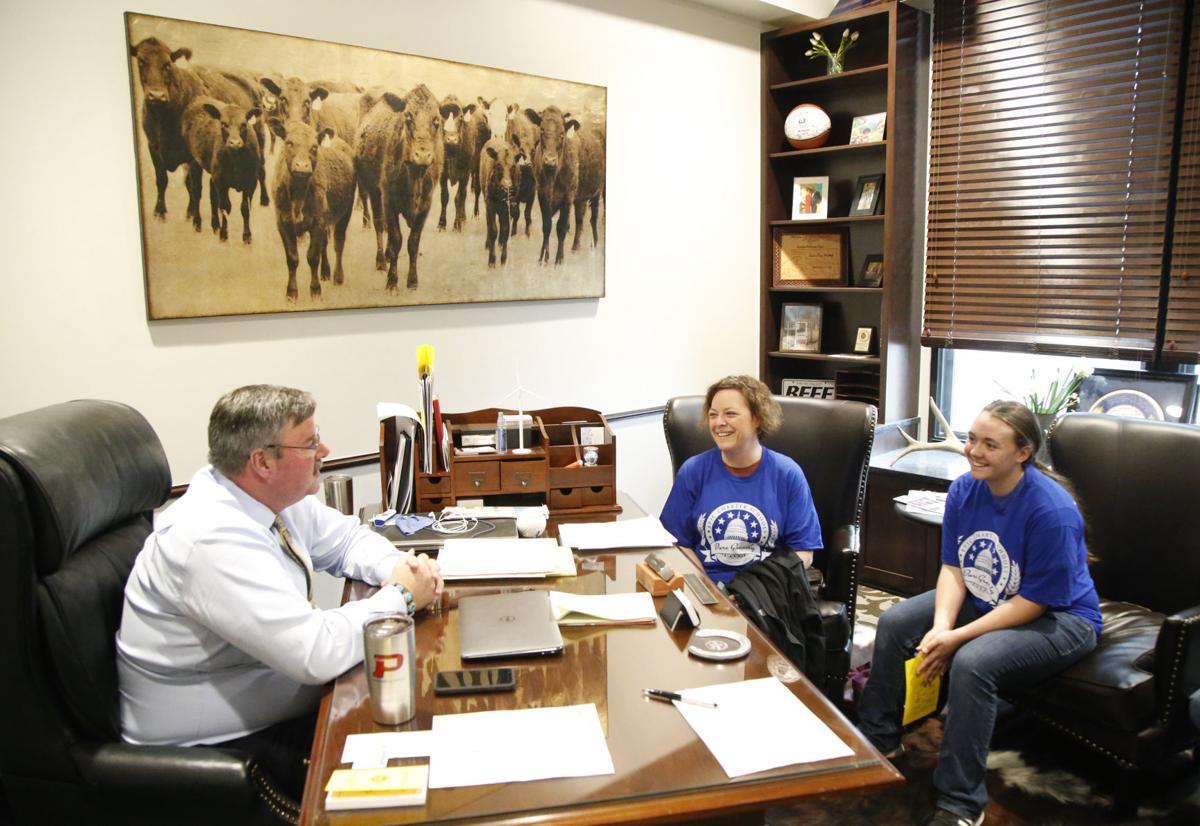 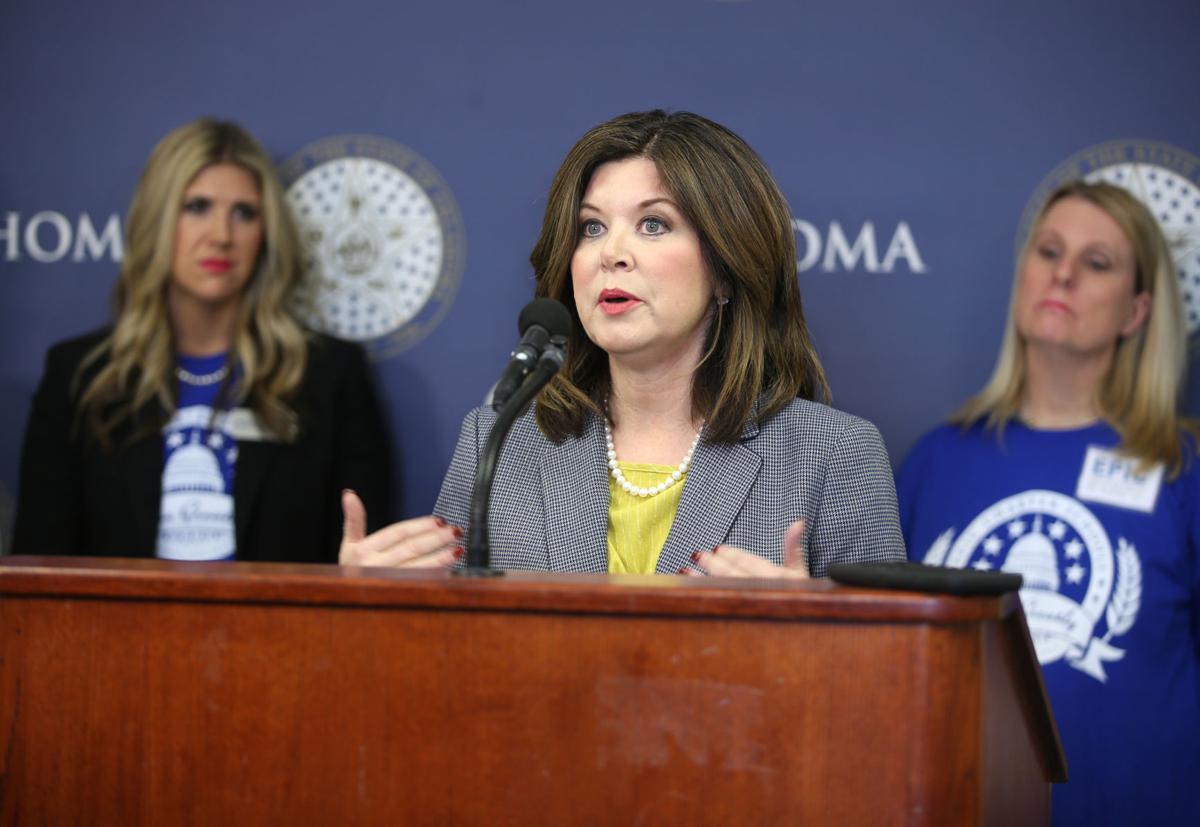 Shelly Hickman, assistant superintendent of Epic Charter Schools, speaks during a lobbying day at the state Capitol on Monday. 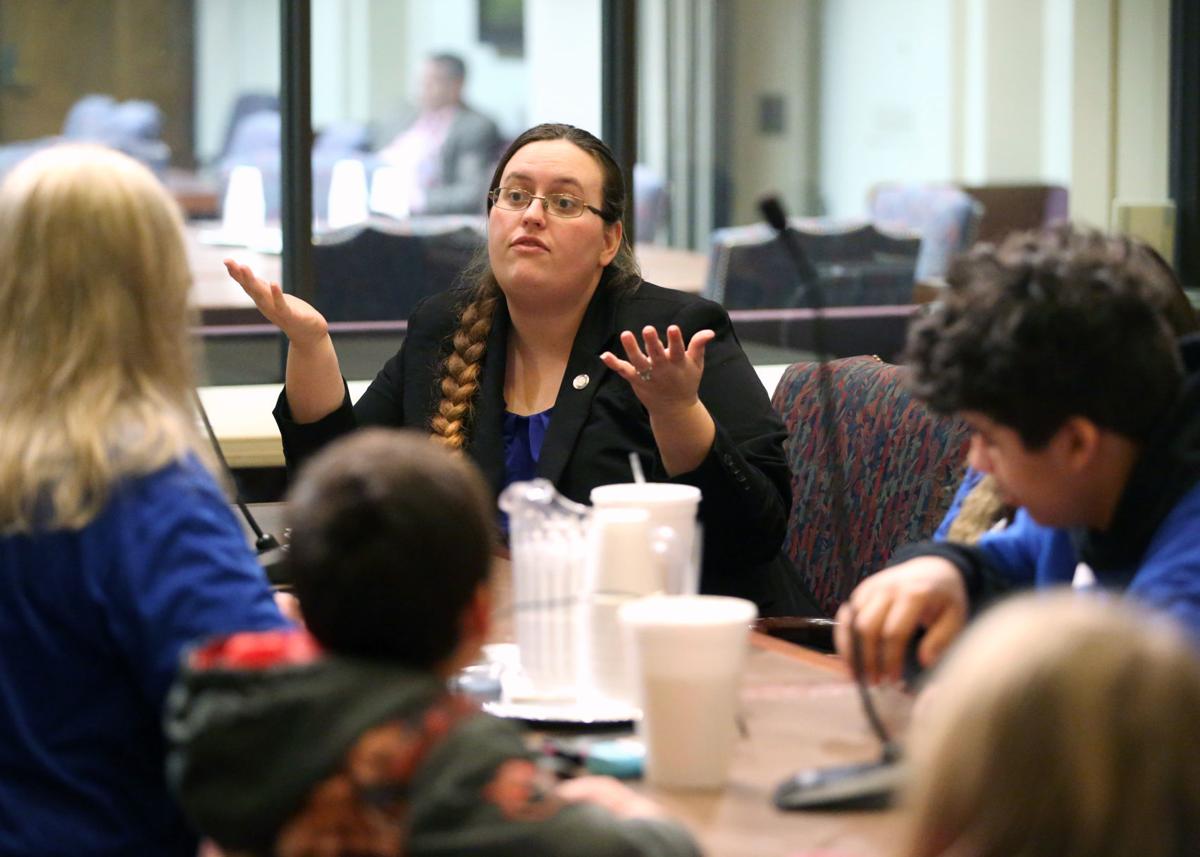 Sen. Allison Ikley-Freeman, D-Tulsa, meets with Epic Charter School students during a lobbying day at the state Capitol in Oklahoma City on Monday. 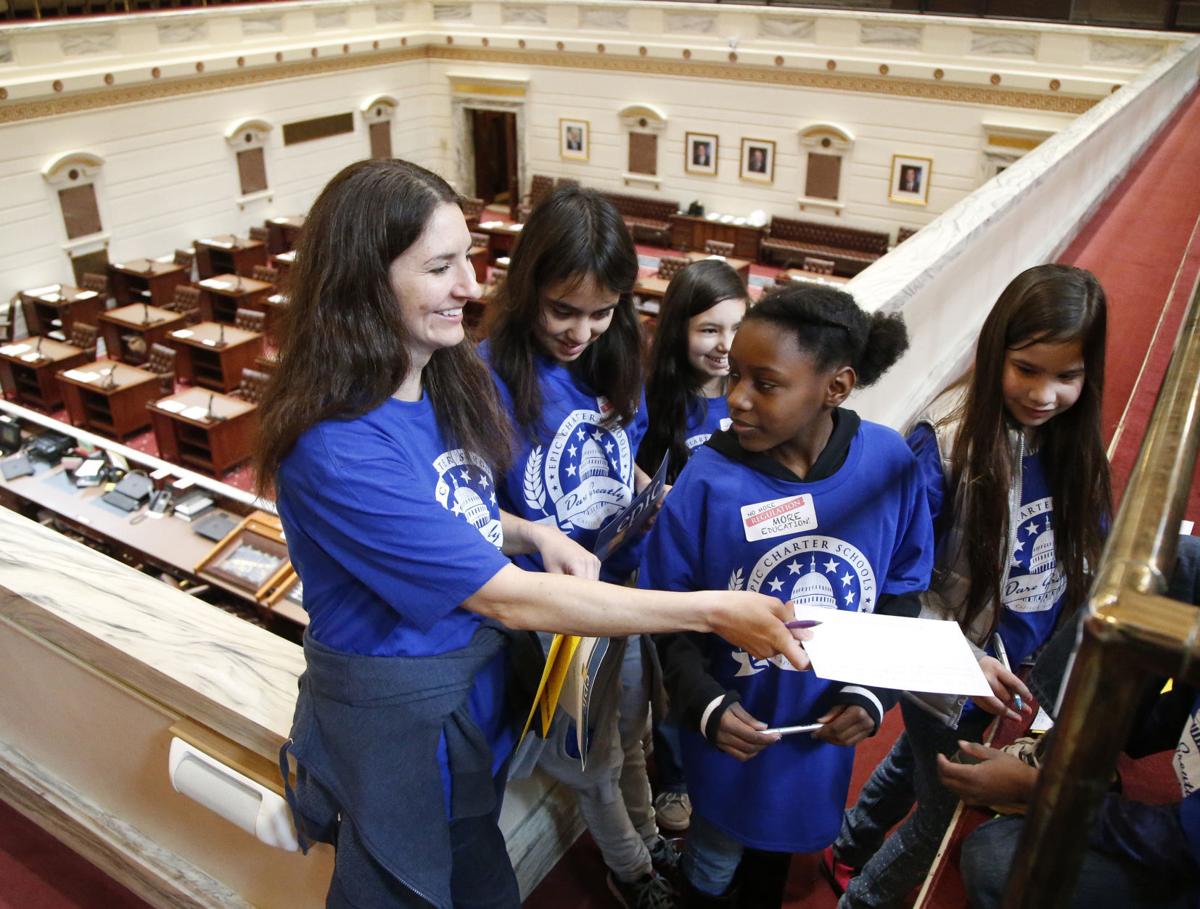 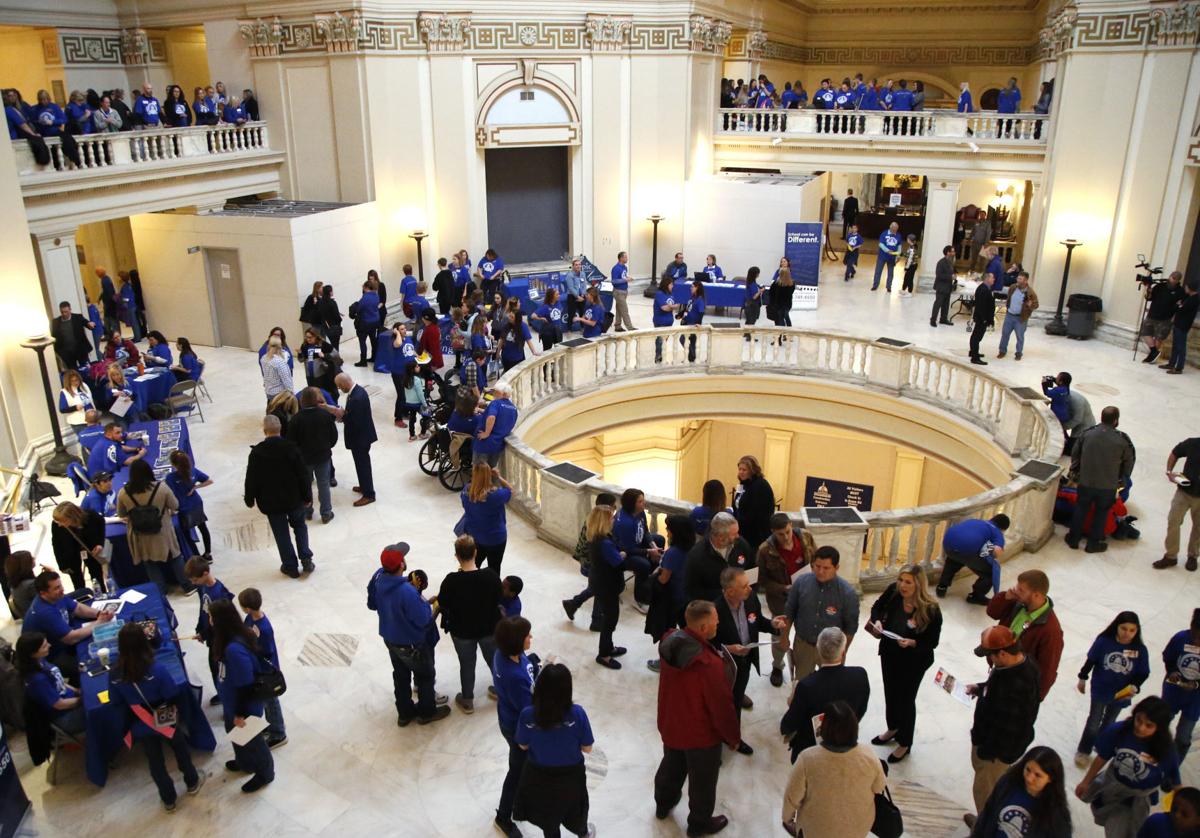 Carrie Pollard (foreground right) and her daughter, Brinly Crowe (foreground left), applaud at a rally during a lobbying event by Epic Charter Schools at the state Capitol in Oklahoma City on Monday. MATT BARNARD/Tulsa World

Shelly Hickman, assistant superintendent of Epic Charter Schools, speaks during a lobbying day at the state Capitol on Monday.

Sen. Allison Ikley-Freeman, D-Tulsa, meets with Epic Charter School students during a lobbying day at the state Capitol in Oklahoma City on Monday.

OKLAHOMA CITY — Thousands of students and their parents descended on the state Capitol Monday to share with lawmakers their myriad reasons for choosing an online education through Epic Charter Schools. Not all of them came to oppose various pieces of legislation that would require the school and its for-profit management company to disclose more about how it spends public tax dollars.

Laura and Matthew Jennings brought their two children from their home in Marlow to visit with state Rep. Brad Boles, R-Marlow.

“He lives like two streets away from us, but we wanted him to know why we made this choice,” said Laura Jennings. “He wanted to know our point of view and he shared with us that he is for transparency and I am all for that, too. It’s state funds — every person who pays taxes deserves to know how that money is spent.”

Jennings said her older child, Jaxon, struggled to sit for seven hours straight in traditional public school. So she began homeschooling him and his younger sister, Aubrey. She did that for three years and then she and Matthew made the decision to enroll them in Epic two years ago.

“Epic does benchmark tests and the state test, so we made the decision to move to Epic so we would know whether our child was hitting those benchmarks or not,” Laura Jennings said. “It’s nice to have that feedback, but one of my best friends has a child in Epic and we made the choice for two totally different reasons and that’s something I want lawmakers to know — the array of reasons to choose Epic.”

Katrina and Shawn McDowell came all the way from the tiny town of Mutual in the northwest part of the state with their daughter Kamryn, who is now a high school freshman. They sat down with their representative, Casey Murdock, R-Felt, and shared that Kamryn chose Epic to escape bullying in traditional school and to have more elective course offerings.

“I get more of a sense of life with all of the opportunities I have through Epic,” Kamryn McDowell told Murdock.

Talk of the ongoing scrutiny that Epic is under by state and federal law enforcement was limited to questions from news reporters at separate news conferences held by Epic’s spokeswoman Shelly Hickman and Senate President Pro Tem Greg Treat, R-Oklahoma City.

Treat told reporters he had been following news coverage of the matter.

“I’ve been reading the stories about investigations of one of the virtual charter schools,” he said. “I’ve been keeping track of that and I want to make sure we’re using those monies as efficiently and in the way the law allows. But I believe in having parental choice about how some of those dollars go and virtual charter schools have obviously filled a niche that was needed. Parents have demanded some options in that arena. Of course, anyone who uses public money shall be held to account for the use of those funds.”

In late February, the Tulsa World was the first to report that the Oklahoma State Bureau of Investigation is once again investigating Epic. Public records obtained by the World indicate widespread accounts that some Epic Charter Schools students are dually enrolled in private schools appear to be at least one line of inquiry by federal investigators from the U.S. Department of Education’s Office of the Inspector General.

Hickman, the school’s spokeswoman, told reporters in a separate news conference that Epic had still “not been contacted by any federal investigator” to date.

As for students being dual-enrolled, Hickman said: “I believe there are students availing themselves of private, supplemental services such as tutoring, daycare, co-ops.”

But as for students being dual-enrolled on a full-time basis, she said state law does not allow the school “to probe into their private life.”

“If they are, they’re not disclosing that information to us,” she said.

In the vacant state Senate Chamber, Janna Wayman and her five children were spread out on the floor of the public gallery seating area, writing out messages to their lawmakers by hand.

Sixth-grader Ana Wayman, 12, wrote: “Epic lets us go ahead and learn above our grade.”

“Our family is a little different because all of my children were adopted through the foster care system,” said Wayman, who lives in southeast Oklahoma City. “Several of my kids missed out on a lot of schooling while they moved from home to home and homeschooling allows us more flexibility to address those individual needs and plenty of time for counseling to address their emotional needs.”

Wayman’s children are in their second year at Epic, but she still considers herself their primary teacher, a role she’s held for six years. Their assigned teacher comes to their house once a week to help out.

“The main reason we switched to Epic is the Learning Fund. My kids only do about 10 percent of their learning online and 90 percent with me, using the fund to do science experiments and we do a lot of field trips,” Wayman said. “We can use the Learning Fund for family science museum passes, chemistry sets, circuitry sets, magnet sets, Spanish and typing software, orchestra lessons because all five of my kids play string instruments — that would all come out of my own pocket otherwise.”

Epic students have access to at least $900 worth of annual funding that, once any curriculum and technology costs are covered, can be paid out for extracurricular, educational activities through something Epic calls the Learning Fund.

The Waymans were writing notes to take to the offices of Rep. Robert Manger, R-Oklahoma City, and Sen. Ron Sharp, R-Shawnee.

“He’s one they really want us to talk to because he doesn’t like Epic,” Wayman said, laughing, referring to Sharp, who alone authored nine bills this session seeking new restrictions or greater accountability for the public dollars flowing to virtual charter schools. “There are plenty of things I don’t like about Epic, but I told you why I use Epic!”

‘I was so proud of myself’

Sand Springs resident Kim Haley, who said she is an adoptive and foster mother, brought most of the seven children currently under her care to join with their assigned Epic teacher, Karen Davis, to meet with state Sen. Allison Ikley-Freeman, D-Tulsa.

“Right now, my seven kids are all doing so much better in Epic. I can see exactly where they are. It’s not for everyone, but my kids excel,” Haley said.

She shared that her daughter, Bella Haley, a sophomore, had fallen behind during earlier, “rough” years of her life when there was a lot of inconsistency.

Bella told Ikley-Freeman that she had been getting failing grades in traditional public school, but being able to study at her own pace allowed her to quickly turn things around.

“My first time at Epic, I got all As. I was so proud of myself — it was amazing,” Bella Haley said.

Ikley-Freeman responded that she had once told Epic co-founder David Chaney that “Epic was created to serve a gap and they’ve done that well and I commend them for that.”

She went on to say that she believes a great deal of conflict that exists between the political interests of traditional public schools and public charter schools stems from inadequate funding.