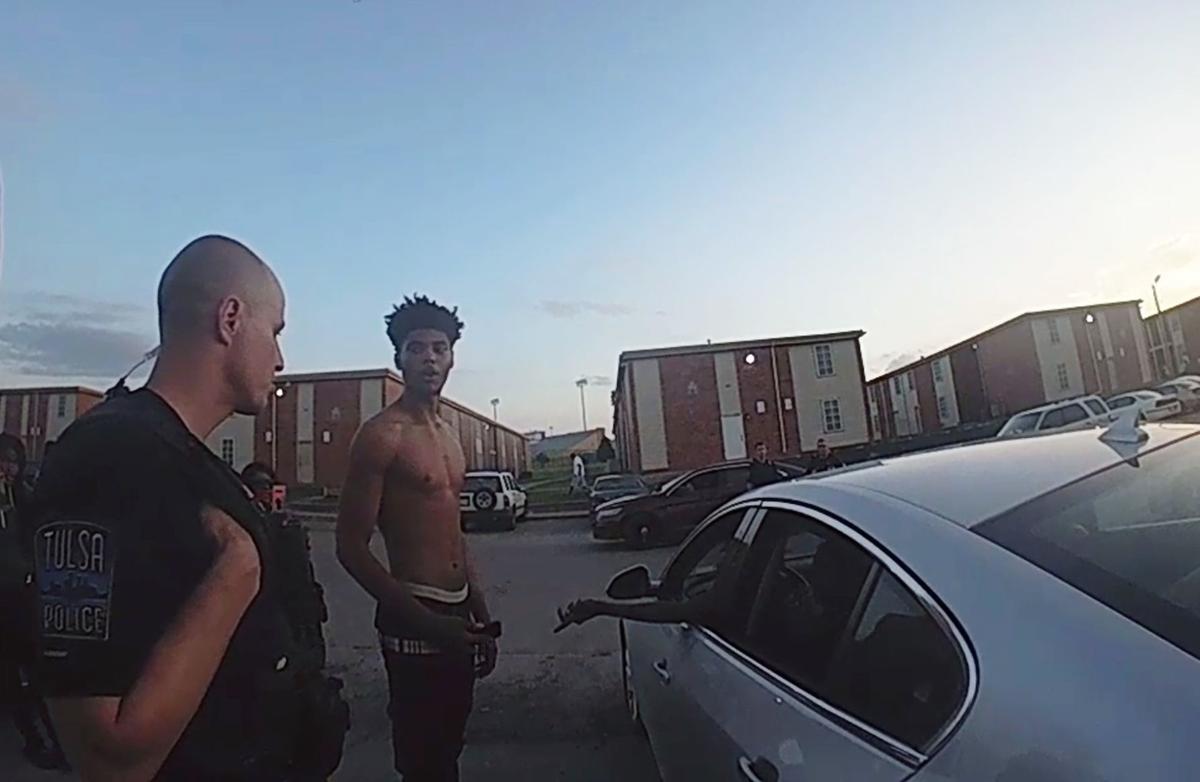 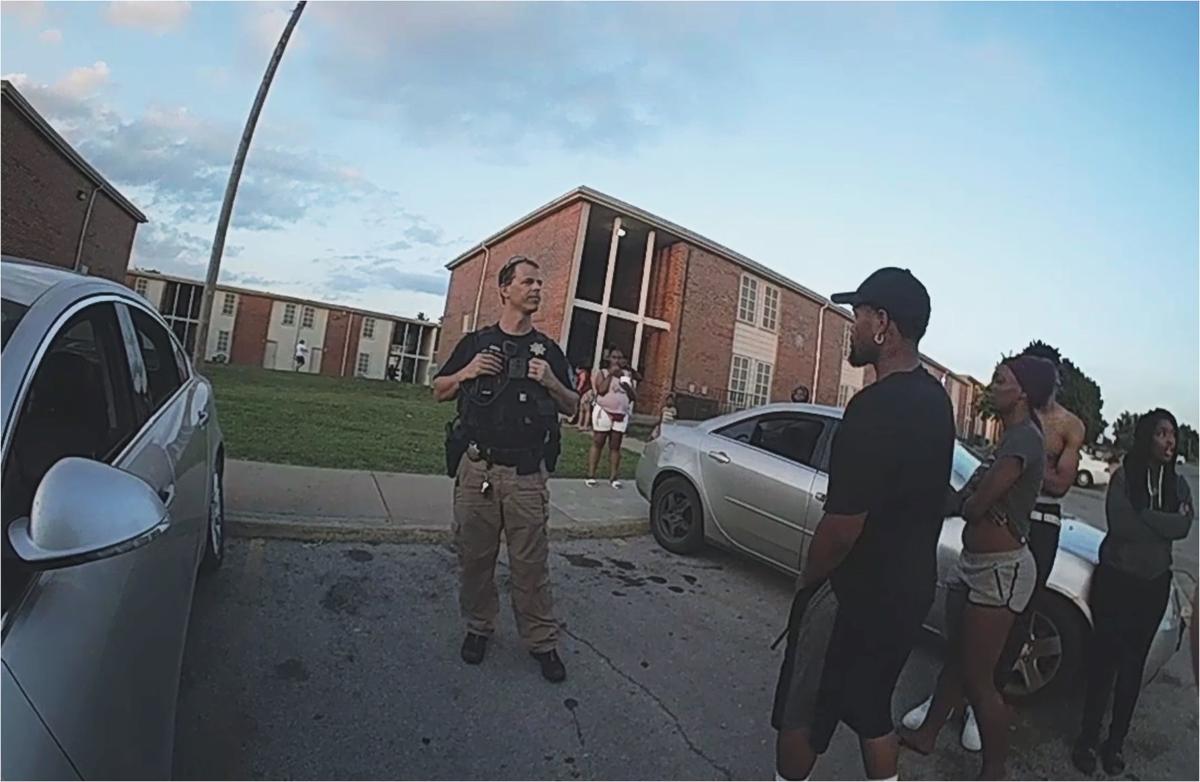 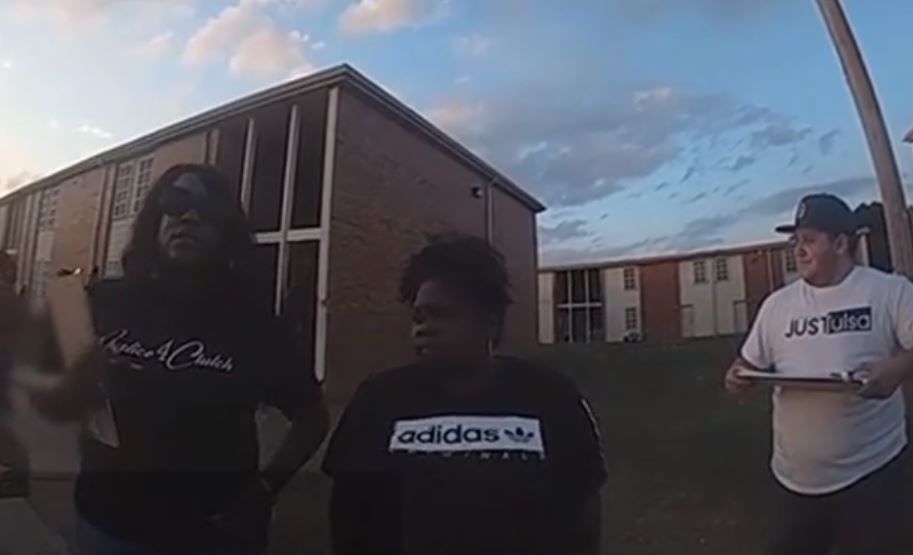 A Tulsa police video screen shot shows an encounter between Tiffany Crutcher (left), Kristi Williams and Nat Wachowski-Estes and officers at the Town Square Apartments on June 9. Reports of the events of that night differ widely in detail and substance. 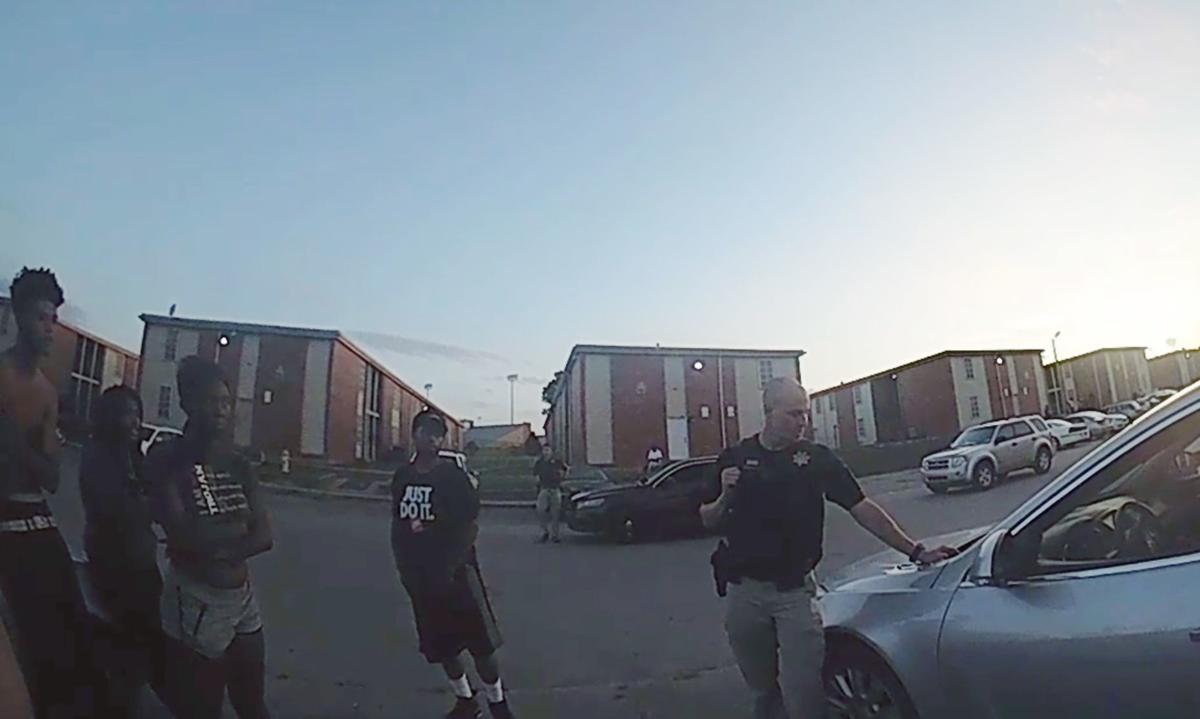 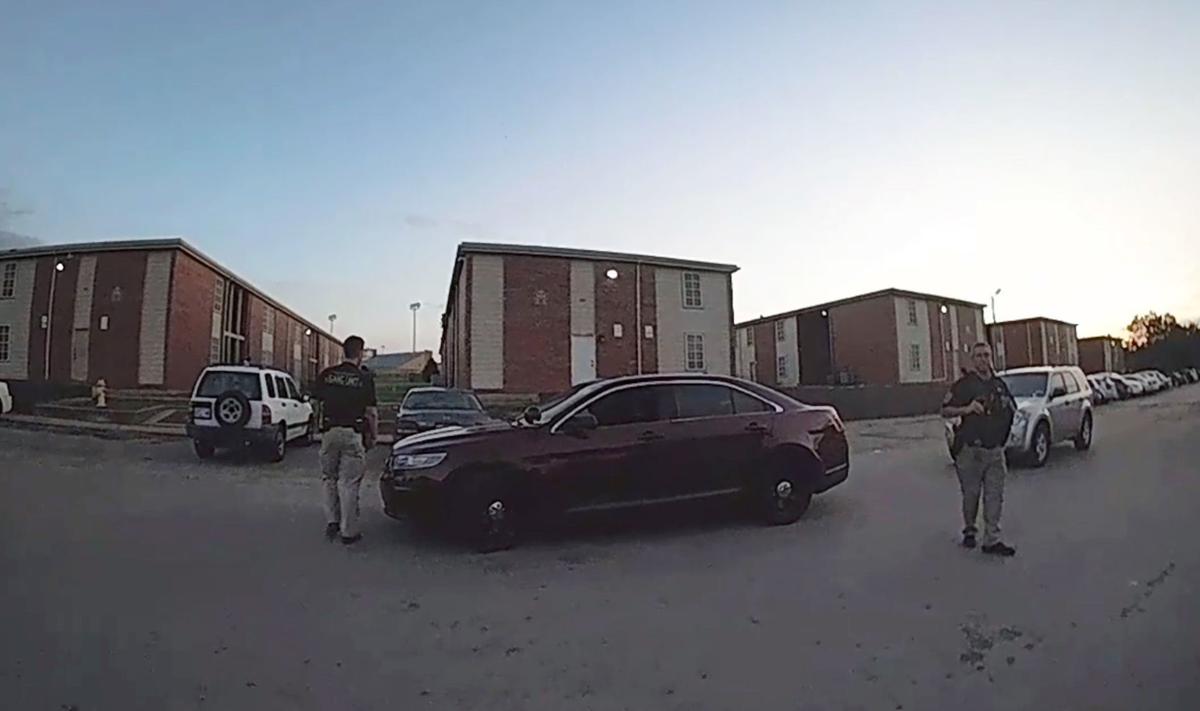 On a steamy summer evening at the Towne Square Apartments, a group of children take turns tossing around a football on a patch of grass between residential buildings.

Not too far away, a group of adults share a few laughs in the parking lot.

A week before these scenes took place, the apartment complex and the individuals and families who inhabit its units became the epicenter of a conversation about race and placed the Tulsa Police Department’s community policing efforts under a microscope.

A public debate has centered on the practices of police officers. Community activists say they support good police practices that could produce effective community policing. However, they also say they have witnessed racially biased policing. Police say they treat citizens with respect, and their efforts are only intended to prevent crime.

The most high-profile encounter came during a July 10 City Council meeting related to Tulsa’s Equality Indicators Report. An activist group, Demanding a JUSTulsa, described how TPD Gang Unit officers converged on the Towne Square apartment complex the previous night in unmarked police vehicles and demanded people — all of whom were black youths — show identification. Officers also wanted to know whether a car parked nearby belonged to them.

No arrests were made during the lengthy interaction, according to police.

But that didn’t stop concerned citizens from claiming that police officers had unnecessarily confronted the residents and were especially persistent because the people targeted were black.

“These young people were targeted, peppered with questions, and accused of being dishonest simply because they sat in a parked car in a particular neighborhood,” JUSTulsa wrote in a letter in response to the encounter.

‘I had to play it smooth’

Rodney Brown, who has lived at the Towne Square Apartments for the last three years, agreed that police officers who often patrol the area create an atmosphere where residents are considered suspected criminals without cause in most cases.

Brown described a recent encounter when an officer allegedly accused him of being a suspect police were seeking in a robbery.

“The (officer) asked me my name,” Brown recalled. “He said, ‘Let me see your ID.’ I asked what did I do and gave him my driver’s license.”

Brown then claimed the officer told him he looked similar to a person who robbed a store near the apartment complex.

“He already had a paper in his hand with (a description) of what the guy looked like,” explained Brown about the interaction he concluded was harassment. “I had to play it smooth, I played it calm. I didn’t want to get loud with him because that’s what they want you to do so they can arrest you.”

Others like James Smith said officers he’s dealt with regularly fail to treat him humanely during contacts — often only presuming he’s involved in something nefarious.

“It feels like when they put on that badge, it’s like they’re above somebody,” said Smith. “As a citizen, can I get out of my car and approach you to ask what your name is or do you have drugs on you for the hell of it? That is why the police do not get any respect. We don’t care about them riding through here. But if there isn’t any crime going on, we don’t need them here.”

The Tulsa Police Department, however, says officers’ presence at the apartment complex is justified.

In a series of videos released chronicling the July 9 encounter, Cpl. Rusty Brown, one of the Gang Unit officers at the apartment that evening, was shown explaining to an activist that the unit goes to the apartments because of the frequency of violent crime that occurs there.

According to violent crime statistics compiled by the Tulsa World dating back to 2004, there have been 11 homicides at Towne Square Apartments, including five killings in the last four years.

Additional statistics showed that police responded to 456 calls in 2018 alone. Of those calls, 118 were domestic-related. Others included nine assaults, four shootings and three stabbings. More than 260 calls for police service have been made so far this year, according to TPD records.

TPD Gang Unit Sgt. Brian Hill explained that questioning residents — even when individuals are not actively committing crimes — is all part of a crime-prevention strategy described as “proactive policing.”

“It’s our duty to go into these complexes and go into the hot spots in the city of Tulsa and to detect crime and to speak with people. ... not purely react to a crime,” said Hill. “If we are purely reactionary as a law enforcement agency, then these crime numbers citywide are going to go up astronomically.”

Hill also disputed accusations that officers deployed to Towne Square Apartments behaved in a way that would constitute harassment and explained that contacts with citizens are regularly brief and consensual.

Mayor G.T. Bynum, who was at the Towne Square scene observing from a police vehicle as part of a ride-along, viewed the interaction differently, saying he did not see alleged harassment asserted by residents or activists.

“I saw a very different dynamic occur once folks started showing up and telling people in that complex that this is racially biased policing,” Bynum said at the City Council meeting.

That varying perspective sparked an immediate debate on how African Americans viewed encounters with police officers differently compared to other groups.

Tiffany Crutcher, who was also at the apartment complex, explained to Bynum that the number of officers concentrated in one area (though Hill said only three uniformed officers were on duty that night) was “escalation alone and tension alone.”

Though Bynum acknowledged there is a disparity in perceptions about policing — even from his own vantage point — Smith, however, pointed out that the mayor only experienced a limited perspective of what usually transpires when police infiltrate the neighborhood. Officers, he said, aren’t normally as affable as they were when Bynum visited.

“The problem with Mayor Bynum is that he doesn’t live here,” said Smith. “He doesn’t know what happens here every day. The police only showed him what they wanted him to see.”

The Tulsa Fraternal Order of Police in a news release days after the encounter said it supported Bynum for accurately describing the interaction between police and residents. FOP Lodge 93 President Mark Secrist added that the criticism directed at officers was an attempt to discredit police work.

“It was yet another attempt to spread a false narrative, question body camera footage, and discredit the mayor’s factual first-hand account of the Towne Square incident,” Secrist said. “The main goal of community policing is to build relationships to help reduce crime. We will continue to encourage our officers to pursue that mission and position themselves in high-crime areas, to keep our citizens safe.”

‘Get to know the neighborhood’

Marcus James has lived at the apartment complex for fewer than two years after moving from Phoenix, Arizona. He said officers could go a long way in building trust with residents if “instead of policing the neighborhood, they get to know the neighborhood.”

“... Start building a rapport with people you are supposed to be policing,” James said. “That way, they won’t be afraid of you. Start becoming part of the community you’re trying to protect. They have to get out of their cars and talk to people instead of watching and waiting for them to mess up.”

Executing tenets of the program is something that Hill said the Gang Unit has tried to make part of its practices while working at the Towne Square Apartments and in other areas across the city.

“We handed out coats at that very same apartment complex. It was our unit, not anyone else at the Tulsa Police Department,” said Hill.

The veteran officer said the unit has been “universally lauded” for its treatment of citizens while in the field contrary to anecdotal opposition.

“We treat them with respect,” he said. “Our use-of-force is extremely low and our complaint levels are almost zero.”

Both citizens and police have recognized that effective community policing in Tulsa — not just isolated to one apartment complex — will require trust and credibility.

But there still is uncertainty whether the initiative is working at all under its current structure.

Chief Egunwale Fagbenro Amusan, president of the Tulsa African Ancestral Society, used information from the city’s Community Policing Dashboard webpage that allow residents to track progress on 77 recommendations made by the Tulsa Commission on Community Policing to draw his own conclusion.

Egunwale Fagbenro Amusan was under the impression that the Police Department was not committed to community policing based on what he saw.

However, the dashboard indicates that 97% of the recommendations are being implemented. Only 3% are left to complete, according to the site.

But those details did not stop him from challenging TPD’s community policing efforts.

“Is community policing working based on their information?” he asked in response to whether he thought the practice was productive. “My answer is unequivocally no.”

Mayor G.T. Bynum and Tiffany Crutcher have a discussion after an Equality Indicators meeting

On Texas visit, Biden warns Iran 'to be careful'

Principal fixes student's haircut to help boost child's confidence, get him back to class

A middle school principal in Indianapolis is being praised for the way he handled a student who refused to remove his hat in class.

Thirty-four of 42 ZIP codes are in orange, which still represents high levels of spread.

Within 72 hours of a subzero freeze, more than $1.5 million was raised to place at least 400 people into hotels. This impressive lift had an immediate effect but will also change some lives long-term.

An Oklahoma City police officer has been charged with first-degree manslaughter in the deadly shooting of a 60-year-old mentally ill Black man.

Michael Overall: In winter blast, Tulsa's 'Camp Doctor' got a bigger adventure than she bargained for

Dr. Patricia Ellison loves her little camper. Except maybe not so much in the snow.

A Tulsa police video screen shot shows an encounter between Tiffany Crutcher (left), Kristi Williams and Nat Wachowski-Estes and officers at the Town Square Apartments on June 9. Reports of the events of that night differ widely in detail and substance.