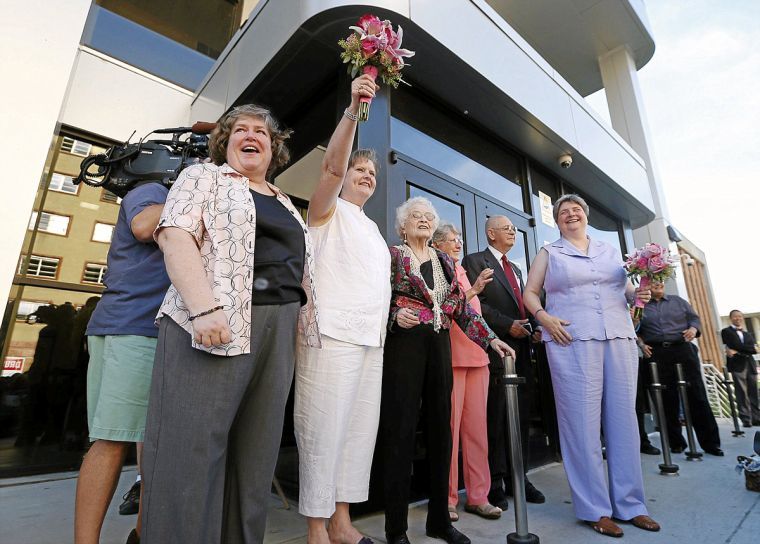 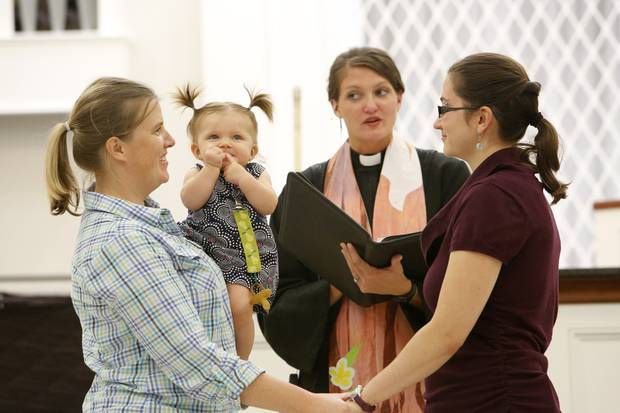 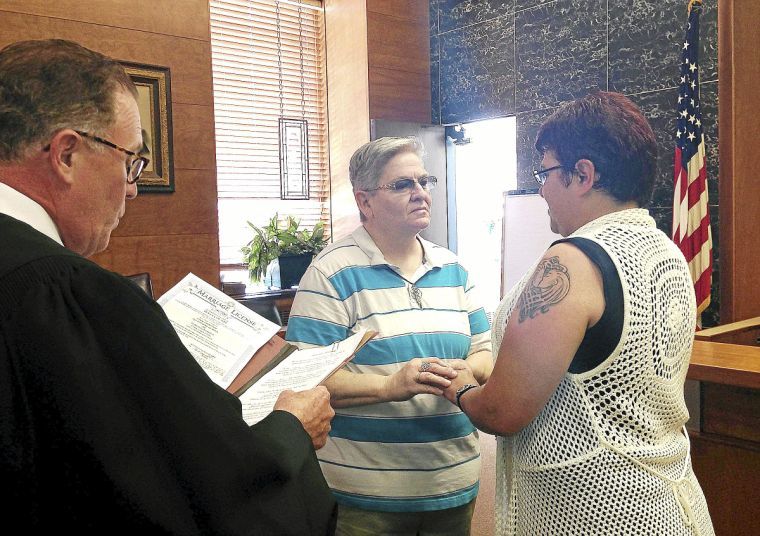 Patricia Harmon 61, and Ria Harmon, 54, are married by Tulsa County District Judge Anthony Miller on Tuesday afternoon. The ceremony, which took place at 2:30 CST, is believed to be one of the first same-sex marriages in the state of Oklahoma. KEVIN CANFIELD/ Tulsa World

LeAnne Williams had many conversations with her son about whether working at a same-sex wedding would hurt their photography business.

When an Oklahoma federal judge set the course for marriage equality a year ago, the family decided to risk the consequences and seek out doing business with gay, lesbian, bisexual and transgender couples.

“I don’t discuss my political views with clients,” Williams said. “With something as big as this, I didn’t want someone’s opinion about this dictating my business practices. I see this as people getting married. I enjoy weddings. I enjoy going to weddings. It doesn’t matter to me what sex they are.”

Since Oct. 6, when marriage licenses became available to same-sex couples in Oklahoma, more than 3,200 licenses have been issued in 23 counties, said Toby Jenkins, executive director of Oklahomans for Equality. Those numbers were through Dec. 7.

About 2,200 of those have been in Oklahoma and Tulsa counties. Another spike has been in border counties to Texas, such as Bryan County.

Unlike high-profile controversies in other states, Oklahoma has avoided public feuds between businesses involved in weddings and same-sex couples. That’s something to celebrate.

Gay-friendly: Oklahoma has two well-established advocacy groups for gay, lesbian, bisexual and transgender people — Oklahomans for Equality based in Tulsa and Cimarron Alliance in Oklahoma City. There are also several groups of PFLAG, formerly known as Parents, Families and Friends of Lesbians and Gays.

These groups were making contacts with businesses, groups and individuals friendly to the gay community decades before the courts forced Oklahoma to issue marriage licenses to same-sex couples.

“We always had a network where people can go to get information,” Jenkins said. “We had a real strong infrastructure in place. We were able to get information out quickly because we have a long, established history of identifying businesses.”

It was about a year ago when U.S. Judge Terence Kern in Tulsa’s Northern District ruled that the same-sex marriage ban put into place by voters in 2004 was unconstitutional. A stay was put into place while it went through appeals.

The 10th U.S. Circuit Court of Appeals upheld Kern’s ruling, but the stay remained. On Oct. 6, the U.S. Supreme Court refused to hear the Oklahoma case, which lifted the stay, and licenses were made available.

The case overturning the Oklahoma ban was filed by Sharon Baldwin and Mary Bishop. They also were the first same-sex couple in Oklahoma to be issued a marriage license, becoming the Bishop-Baldwins.

On Friday, the U.S. Supreme Court said it would take up a review of a Sixth U.S. Circuit Court of Appeals decision that upheld bans on same-sex marriage in four states. That ruling contradicted those in four other federal appellate circuits.

The justices will consider two questions: Does the 14th Amendment require a state to license a marriage between two people of the same sex?

And does the 14th Amendment require a state to recognize a marriage between two people of the same sex when their marriage was lawfully licensed and performed out-of-state?

Starting immediately when Oklahoma began issuing licenses to same-sex couples, Jenkins said the advocacy groups had referrals for officiants, venues, photographers, planners, bakers and other wedding-related businesses. The lists are available on its website at www.okeq.org.

“I don’t want to do business with you if you don’t want my money,” Jenkins said. “But I won’t go to court to make you. We won’t boycott or march. We have found places who want our business and value us.”

Rep. David Brumbaugh, R-Broken Arrow, has proposed House Bill 1007, which states: “No regularly licensed, ordained or authorized official of any religious organization shall be required to solemnize or recognize any marriage that violates the official’s conscience or religious beliefs.”

The court rulings do not impact a religious entity’s right not to marry same-sex couples.

A list of nearly 60 officiants of different faiths from across Oklahoma willing to conduct same-sex marriage ceremonies is available from Oklahomans for Equality.

Facebook reaction: Williams was hired by the Bishop-Baldwins to photograph the reception held after their wedding. She posted some of the images on her Facebook page along with work from other events.

She lost about five “likes” from the page but gained at least 40.

“It balances itself out,” Williams said. “I knew I’d lose business but I’d also gain business. I can’t say who I lost or not. If that ends up being the reason people won’t come to me, I’m OK with that. I’ve already replaced it with other people.”

Williams has been a professional photographer for about 30 years. Her son, 24-year-old Mathew Harader, joined her as a partner at Williams Photography.

The business has worked five same-sex weddings and is booking a handful more.

“Usually, during this time of year, it’s not wedding season,” Williams said. “But my phone has been ringing off the hook and they’ve been same-sex couples. For them, every day is wedding season. It’s been great.”

Wedding photography is a tough business. It’s an all-day documentary of the event, with a photographer constantly in motion while hauling equipment.

It also means the photographer gets to know the couple well.

“You have to form a level of friendship so they will relax in front of the camera,” she said.

While she enjoys weddings, Williams said the long hours and physical demands led to her losing some energy and passion for the work. The same-sex weddings have invigorated her professionally.

“I had to throw out the playbook on same-sex weddings. A lot of the posing done at a wedding is a contrasting of opposites — white dress against a dark suit,” Williams said. “Now, all of a sudden they are dressed alike. I’ve started pulling up tutorials. It’s been an education.”

Whenever Williams has a couple on location for pre-wedding, outdoor photographs, she always calls for approval to avoid confrontation over same-sex marriage. She has never had anyone turn her down.

“I see it as protecting my client,” she said. “This is supposed to be relaxed, fun and exciting for them.”

Many of the weddings since October have been for couples who have been together for decades.

Williams said the same-sex ceremonies she has worked involve couples who have been together for between five and 30 years.

“It’s a whole different vibe,” she said. “It’s relaxed. They are just having a wedding and having a good time.”

1996: Congress approves and the president signs the Defense of Marriage Act, which defined marriage in federal law as being between one man and one woman. The act also allowed states to decline to recognize same-sex marriages from other states.

Nov. 2, 2004: Oklahoma voters by a 3-to-1 margin approve State Question 711, adding a ban on same-sex marriage to the state constitution and prohibiting the benefits of marriage from being given to unmarried people.

June 2013: The U.S. Supreme Court strikes down portions of DOMA. The rulings do not directly affect the Oklahoma case, but the plaintiffs soon file briefs arguing that various defense arguments were now meritless in the wake of the Supreme Court's decision.

December 2013: A federal judge in Utah strikes down that state's same-sex marriage ban, which was also approved by voters in 2004. Hundreds of couples get married, but the U.S. Supreme Court steps in to put a halt to the weddings until the courts sort out the matter.

Oct. 6, 2014: U.S. Supreme Court declines to hear appeal of Oklahoma case and six others related to same-sex marriage. The appeals court dissolves its stay, clearing the way for marriage licenses to be issued in the state. Baldwin and Bishop become the first same-sex couple legally married in Oklahoma, obtaining a marriage license at the Tulsa County Courthouse.

Oct. 27, 2014: 10th U.S. Circuit Court of Appeals decided Tulsa County will have to pay the legal fees for the Bishop-Baldwins, who prevailed in challenging the ban. The amount is pending.

In 35 states and Washington, D.C., same-sex couples have right to be married.

Four states will receive a U.S. Supreme Court review after the Sixth Circuit Court of Appeals upheld the same-sex marriage bans. The ruling contradicts that from the Fourth, Seventh, Ninth, and Tenth Circuits.

Six states have received rulings overturning same-sex marriage bans but are waiting on an appellate review.

Two states have lawsuits pending at the state level.

Millions of retirees on Social Security will get a 5.9% boost in benefits for 2022, the biggest cost-of-living adjustment in 39 years.

Patricia Harmon 61, and Ria Harmon, 54, are married by Tulsa County District Judge Anthony Miller on Tuesday afternoon. The ceremony, which took place at 2:30 CST, is believed to be one of the first same-sex marriages in the state of Oklahoma. KEVIN CANFIELD/ Tulsa World