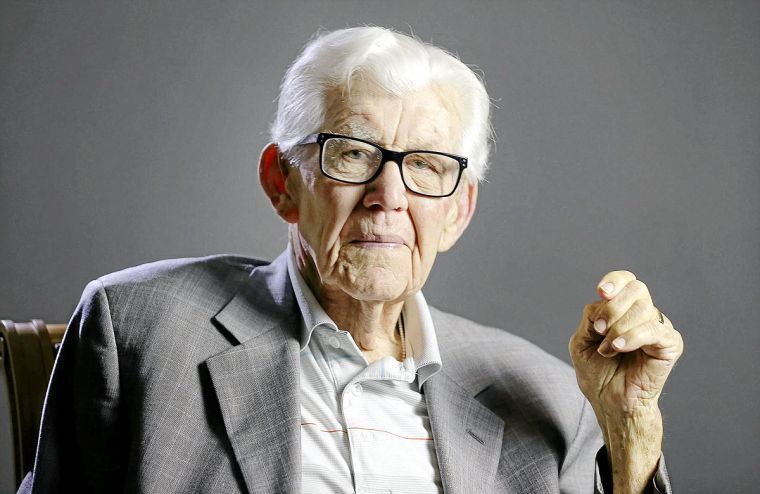 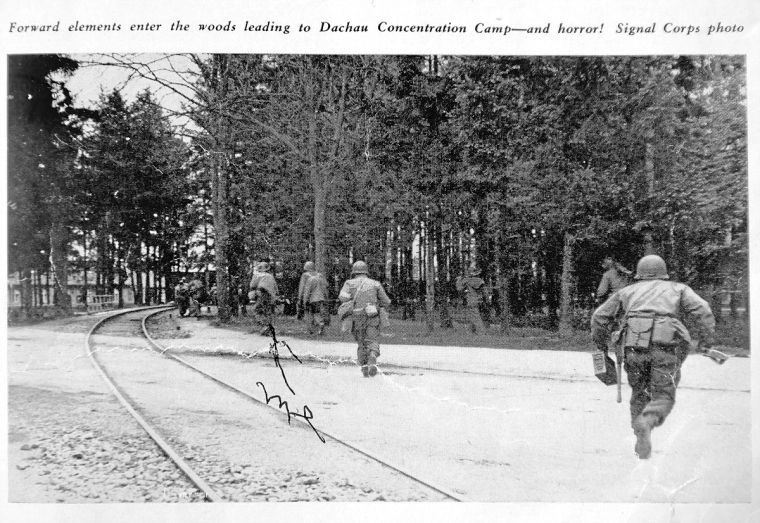 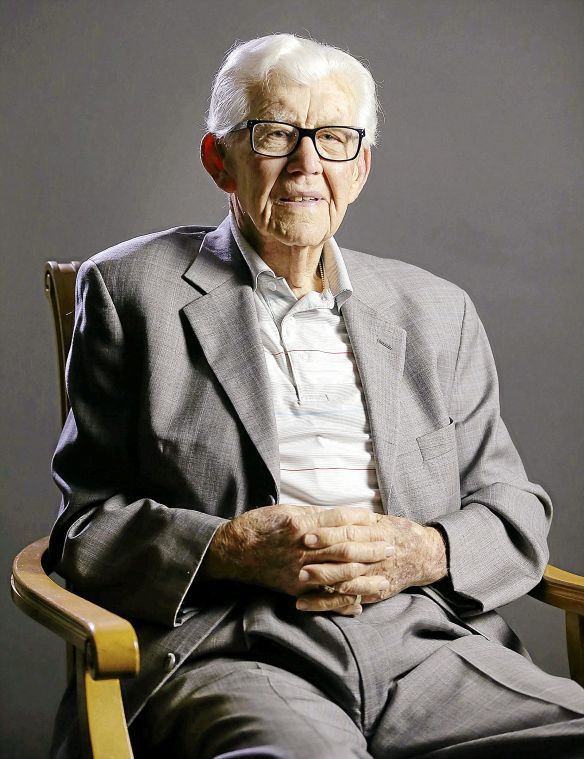 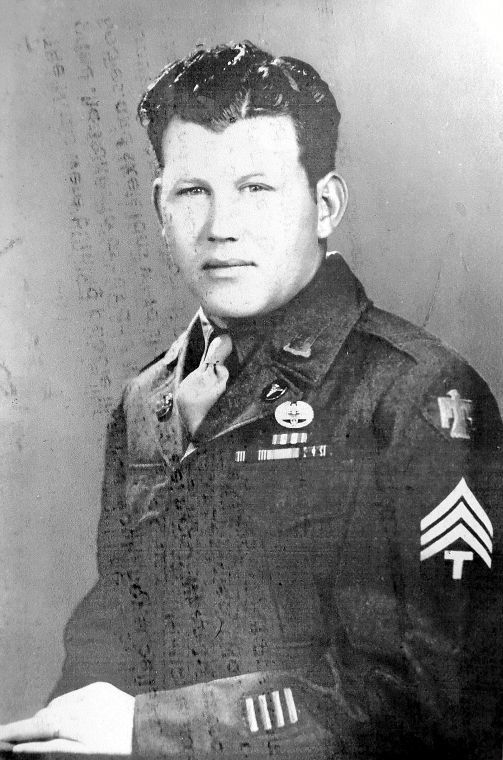 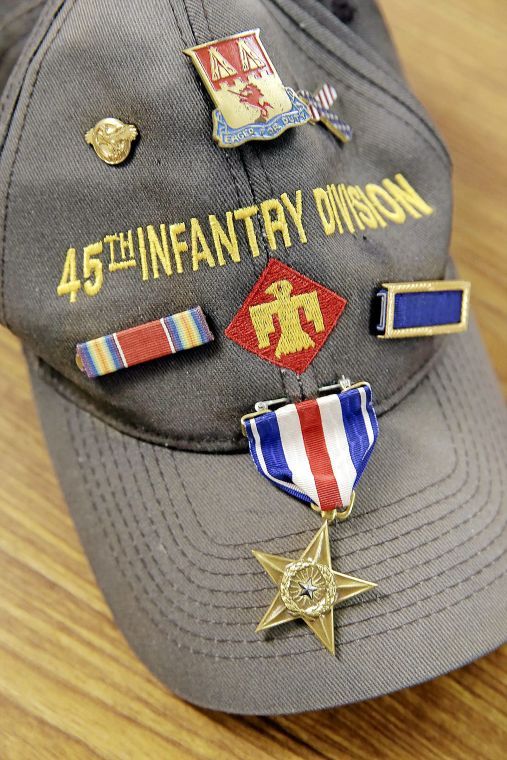 A Silver Star decorates the ball cap of Joe Wilson, a World War II veteran who risked his life to make sure other soldiers were safe while his unit was under heavy artillery fire. MICHAEL WYKE/Tulsa World 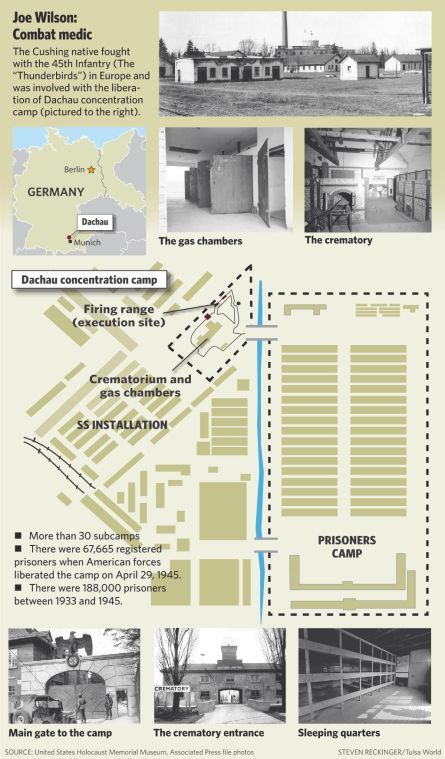 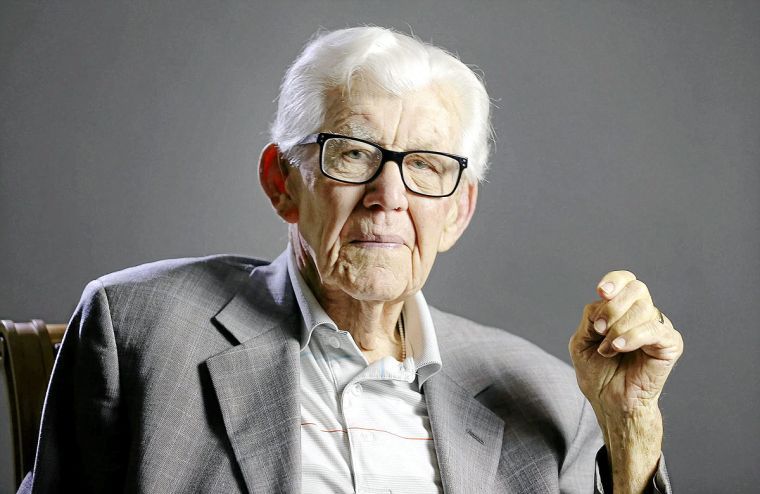 Joe Wilson received a Silver Star and other decorations for his service during World War II. A Tulsa resident and native of Cushing, he died May 17 at age 95.

“And it was just horrible.”

But as much carnage as Wilson witnessed — and it was considerable, with his unit fighting more than 500 days in Sicily, Italy, France and Germany — none of it prepared him for Dachau.

“We came out of the woods and there it was,” he said of his first sight of the infamous German concentration camp.

Wilson talked to the Tulsa World about the war and the action he saw with the Army’s 45th Infantry Division.

Made up of units from Oklahoma and other Southwestern states, the Oklahoma-based 45th was one of the first National Guard units activated in the war, and among its many accomplishments would be liberating Dachau on April 29, 1945.

“The Germans (at the camp) at first were ready to put up a fight,” Wilson said.

But after a brief firefight that left several of them dead, “they saw the writing on the wall and surrendered.”

They were glad to see their liberators, Wilson said — at least those who weren’t so emaciated they were unable to speak.

For Wilson, the images remain fresh. He still recalls the starving faces staring out from behind barbed wire. Little more than skeletons, some would die even as they were being freed.

After securing the camp, Wilson said, the horror just continued to unfold for the soldiers. Wilson said they found boxcars that had once hauled coal were stacked with rotting corpses.

“Bodies were everywhere,” he said.

‘A bunch of greenhorns’

Just 17 when he joined the National Guard in 1938, Wilson had to lie about his age to get in. It was the Depression and times were hard, said Wilson, who grew up in Cushing.

“We’d do anything for a little change in our pocket,” he said.

The teenager had no idea then what lay ahead, that war was coming, and the guard would be mobilized for action overseas.

Wilson’s first taste of combat came in Sicily, when the Allies invaded in July 1943.

“We were a bunch of greenhorns,” he said. “We didn’t know what to expect.”

The landing craft hit the beach, the front ramp lowered and just like that “you’re facing the Germans,” he said.

His job as a combat medic, he said, “was to take care of all the boys who were wounded.”

When possible, Wilson engaged in a little preventative care. His memories of the location and circumstances that earned him a Silver Star are a little fuzzy now. But he knows it happened when his unit was taking heavy artillery fire. Instead of jumping for cover, Wilson risked his life to make sure other soldiers were safe.

One soldier Wilson met holds a permanent place in his heart: An 18-year-old from Indiana named Bobby.

Bobby, whom Wilson befriended and shared a foxhole with, apparently mentioned Wilson once when he wrote home.

A short time later, Wilson said, he received a letter from Bobby’s father.

“He asked me if I could look after him. He said, ‘Bobby is the only boy I’ve got, the only family I’ve got left.’ ”

Not long after Wilson received the letter, Bobby was killed.

“Boy, that’s what hurts — losing a friend like that,” Wilson said.

It has haunted him over the years, that he couldn’t honor the father’s request.

The experience of loss was something everybody had to deal with, though, Wilson added.

“You have a buddy and you’re going along, then you turn around and he’s gone — laying on the ground back there. It’s shocking.”

Ultimately, the former medic added, the only cure for war is “brotherly love.”

If the experience taught him anything, that was it.

After finishing his service, Wilson returned to Oklahoma. He would raise three children with his wife, but he never talked much about the war — and even less about Dachau — until late in life, still coming to terms with he saw.

Five years ago, a trip on one of Oklahoma’s Honor Flights to the WWII memorial in Washington, D.C., helped him to do that.

As Wilson has gotten older, the nightmares have been less frequent.

But sometimes, still, the faces converge on him, hollow eyes peering out from behind barbed-wire fences. When they come to him in his sleep, he said, he usually wakes up.

In recognition of the 70th anniversary of the end of World War II in 2015, the Tulsa World is trying to capture and preserve some of the personal stories of veterans living in the Tulsa area.

Stories in the series "Serving Our Country: World War II Veterans Remember" will be collected at tulsaworld.com/ww2veterans.

If you are a WWII veteran in the Tulsa area and would like to be considered for this ongoing feature — or if you are a family member or friend who would like to recommend a veteran — please email tim.stanley@tulsaworld.com.

About the 45th Infantry Division

Joe Wilson, who was with the 157th Infantry Regiment, G Company, fought in Europe with the celebrated 45th Infantry Division.

Nicknamed the "Thunderbirds," the 45th was originally organized as a National Guard unit in Oklahoma, Arizona, Colorado and New Mexico.

During World War II, the division spent 511 total days in combat, fighting its way from Sicily to Germany. After its performance in Sicily with Gen. George Patton's 7th Army, Patton gave the unit high praise, calling it "one of the best, if not actually the best division in the history of American arms.”

The 45th would continue to make its mark in combat, earning seven Distinguished Unit Citations before, finally, near the war's end, arriving to help liberate 32,000 captives at Dachau concentration camp.

The 45th Infantry Museum in Oklahoma City honors the memory of the unit.

A Silver Star decorates the ball cap of Joe Wilson, a World War II veteran who risked his life to make sure other soldiers were safe while his unit was under heavy artillery fire. MICHAEL WYKE/Tulsa World

Joe Wilson received a Silver Star and other decorations for his service during World War II. A Tulsa resident and native of Cushing, he died May 17 at age 95.