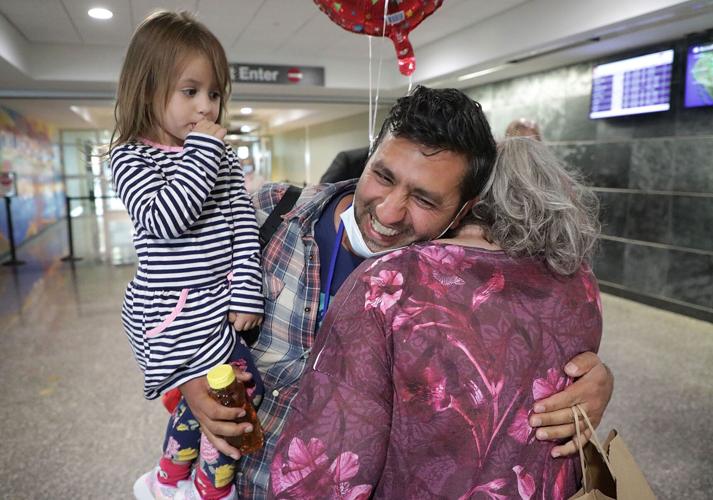 Afghan refugee Faramarz Afshar holds his 2-year-old daughter, Aliyah Afshar, as he is greeted by Megan Ciolli during his arrival at Tulsa International Airport on Nov. 9. Ciolli is Afshar’s wife’s aunt. 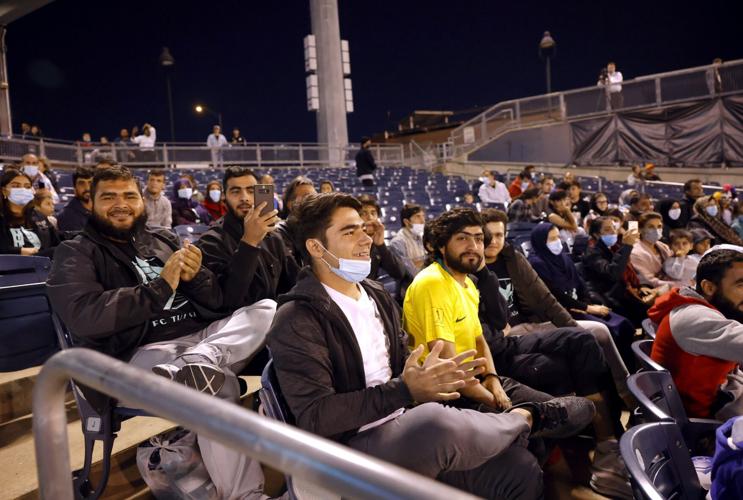 Zain Nabizada (center) is joined by a group of 125 other refugees from Afghanistan, including Ahmad Xousufufzai and Amamallah Rahimi, at an FC Tulsa game at ONEOK Field in Tulsa on Oct. 30. 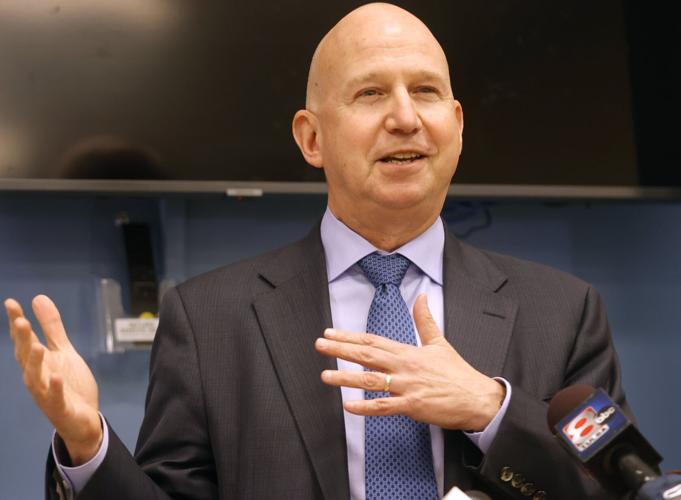 The White House’s point person for Afghan refugee resettlement says the “Oklahoma standard” has quickly become a model for all 200-plus U.S. cities currently taking in those displaced by the American withdrawal.

Tulsa has received 290 refugees so far, and another 510 are set to arrive in the coming months.

“What you have here in Oklahoma is really special,” said former two-term Delaware Gov. Jack Markell, who is overseeing the resettlement of Afghan refugees in the U.S as the White House coordinator for Operation Allies Welcome. “You all are doing it extraordinarily well. I am so impressed.

“And I’m impressed not only with the technical skill with which you are approaching the employment matching and around housing innovations and the work in the schools … all of that’s great. But what else you have is this amazing relationship within your communities.

“It has been remarkable.”

Markell met with Oklahoma City Mayor David Holt on Thursday and with Tulsa Mayor G.T. Bynum on Friday to learn what practices are working best that he could share with other cities accepting refugees and what challenges exist that require more support.

At a Friday afternoon press conference, he shared his takeaways from the trip.

Markell said that while employment opportunities abound in Oklahoma and elsewhere, one of the greatest challenges of Operation Allies Welcome is its coinciding with “a very difficult time in the housing market.”

His trip to Oklahoma also included visits with some refugee families in their temporary housing and even in schools where their children are already attending.

Markell said he was particularly struck by the response he received from an Afghan woman in Tulsa who had been evacuated from her home country with her 6-year-old daughter when he asked her what had come as the biggest surprise to her since arriving in the U.S.

“She said: `To be at Fort Bliss (Texas on a stopover to Tulsa), I was so overwhelmed by all of the U.S. soldiers who were serving and I realized, one day, I want to be able to serve in the same way.’

“It was just an incredible thing for me to hear and to realize the welcome you all are providing is going to be with these families for the rest of their lives — and what could possibly be more powerful than that?”

As the primary refugee resettlement agency for Oklahoma, Catholic Charities has been asked by the U.S. State Department to help relocate 1,800 Afghan citizens to Oklahoma in four months.

“That’s basically insane except for the fact that we can lean into our Tulsa and Oklahoma City communities,” Raglow said at Friday’s press conference. “We wouldn’t have made that offer to the government to resettle that many arrivals but for the fact that we knew we had such awesome partnerships across all faith communities — Jewish, Muslim, non-Catholic Christian, Catholics, seculars, other denominations — all coming together in a way the entire world ought to see, witness, observe and learn from.”

Deacon Kevin Sartorius, chief executive officer at Catholic Charities of Eastern Oklahoma, said religious and other nonprofit service organizations across Tulsa are working at breakneck speed to get the newest Tulsans connected with housing, jobs, schools, food and other basic household needs.

Another 35 individuals are expected to be here by Thanksgiving.

Sartorius emphasized that refugee resettlement is not a one-time event but a years-long process of making sure refugees are safe, well-acclimated and, most importantly, made to feel welcome.

Volunteers, household items and financial donations are needed, but Sartorius said community awareness that so many new refugees are in our midst — many of whom are experiencing language barriers — is also critical in these early days of Operation Allies Welcome.

For more information about how to help, visit cceok.org/refugees.

'These aren't the bad guys': Afghanistan refugees' arrival in Oklahoma has retired Army colonel back in action

Afghan refugee Faramarz Afshar holds his 2-year-old daughter, Aliyah Afshar, as he is greeted by Megan Ciolli during his arrival at Tulsa International Airport on Nov. 9. Ciolli is Afshar’s wife’s aunt.

Zain Nabizada (center) is joined by a group of 125 other refugees from Afghanistan, including Ahmad Xousufufzai and Amamallah Rahimi, at an FC Tulsa game at ONEOK Field in Tulsa on Oct. 30.