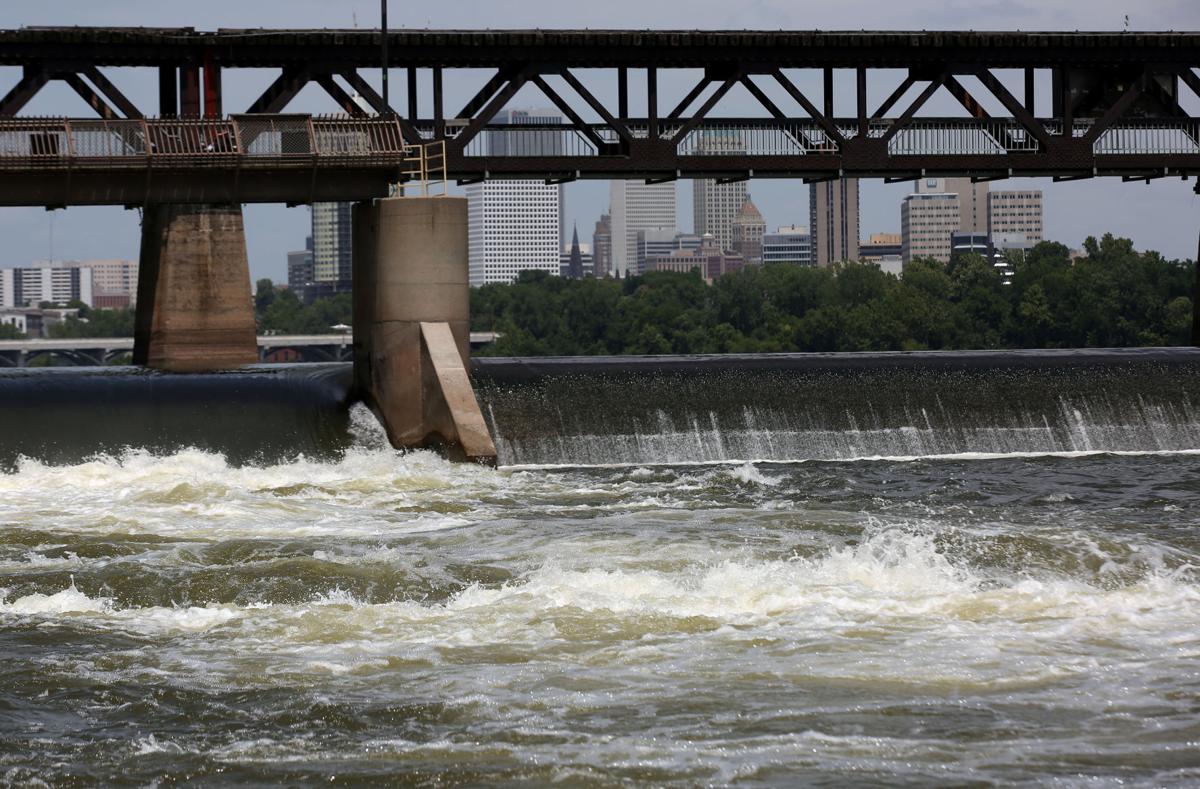 Water rushes over Zink Dam, with the former pedestrian bridge above, on the Arkansas River near 31st Street. JOHN CLANTON/Tulsa World 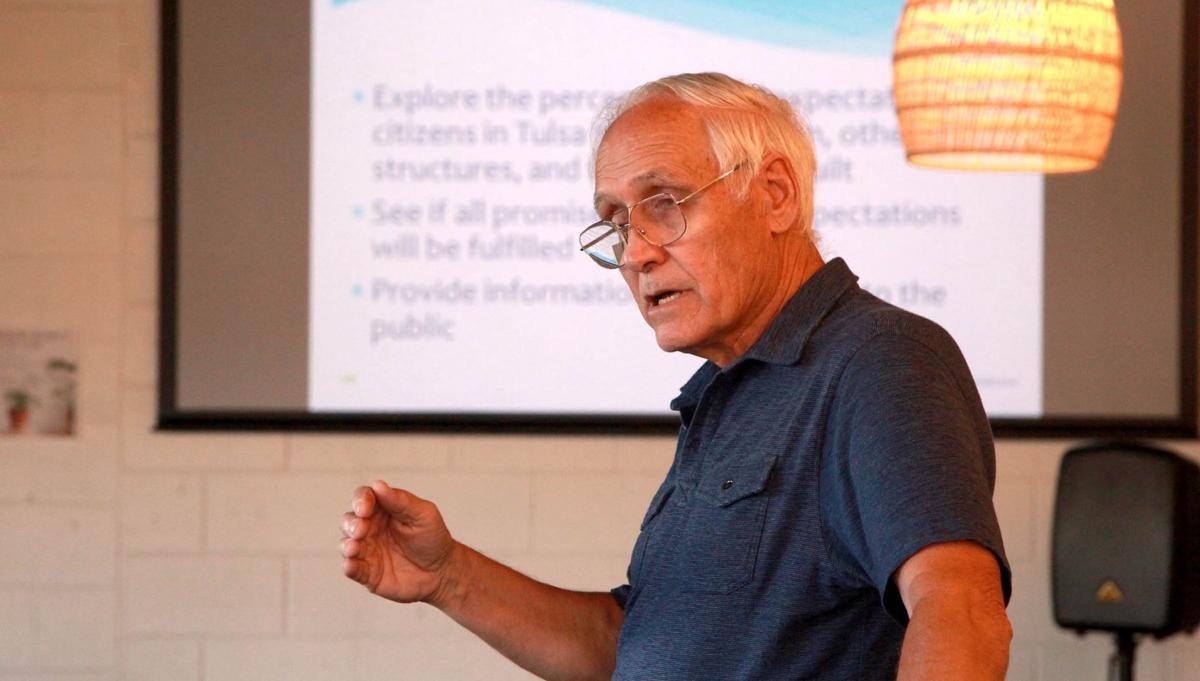 Charles Pratt runs through his presentation in opposition to the Zink Dam for a group at Heirloom Rustic Ales. KELLY BOSTIAN/Tulsa World 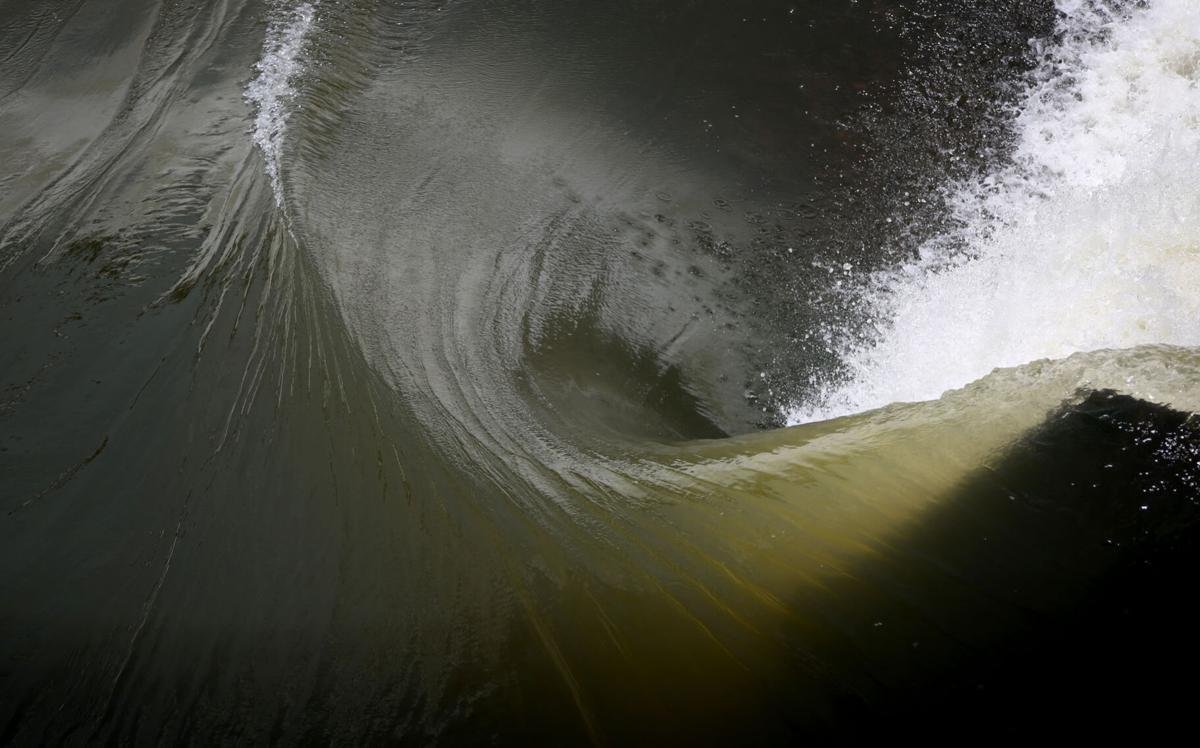 The Arkansas River swirls around as it pours off of the west side of the low water dam called Zink Dam near 31st street on Monday, July 20, 2020. JOHN CLANTON/Tulsa World 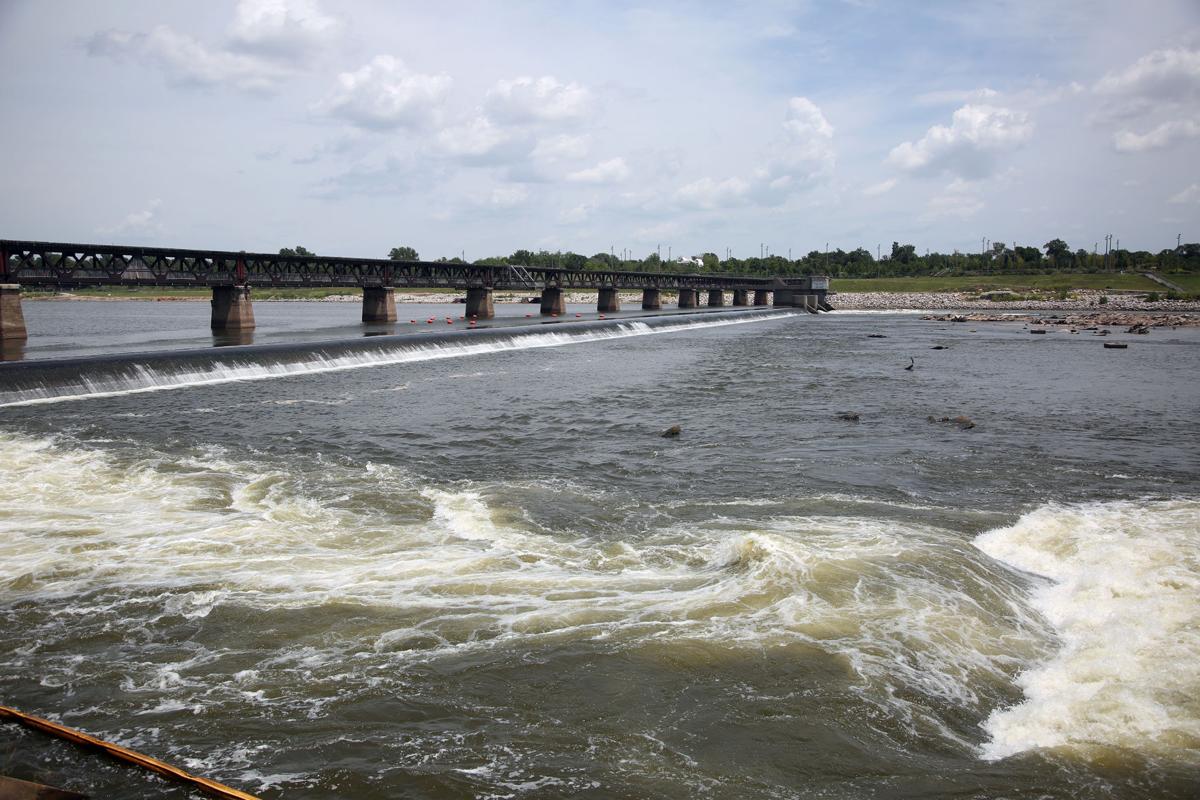 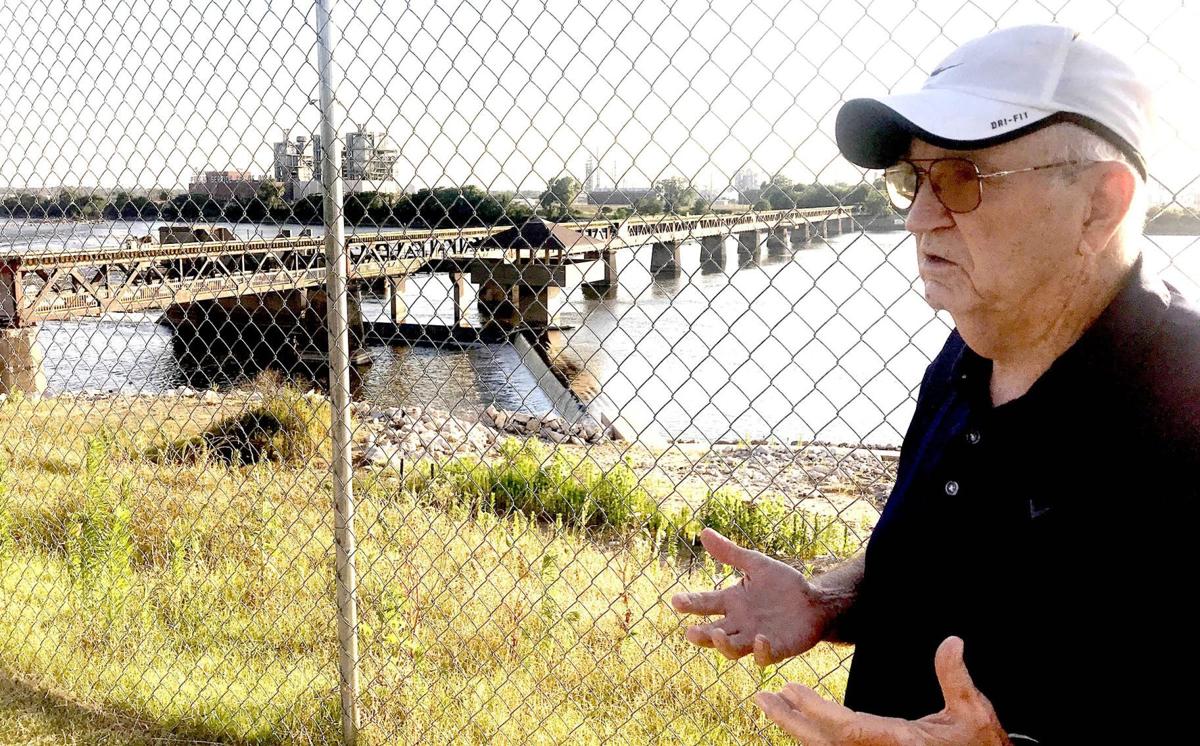 Robert Jackman talks through issues about the Zink Dam from an overlook of the site at the Gathering Place. KELLY BOSTIAN/Tulsa World 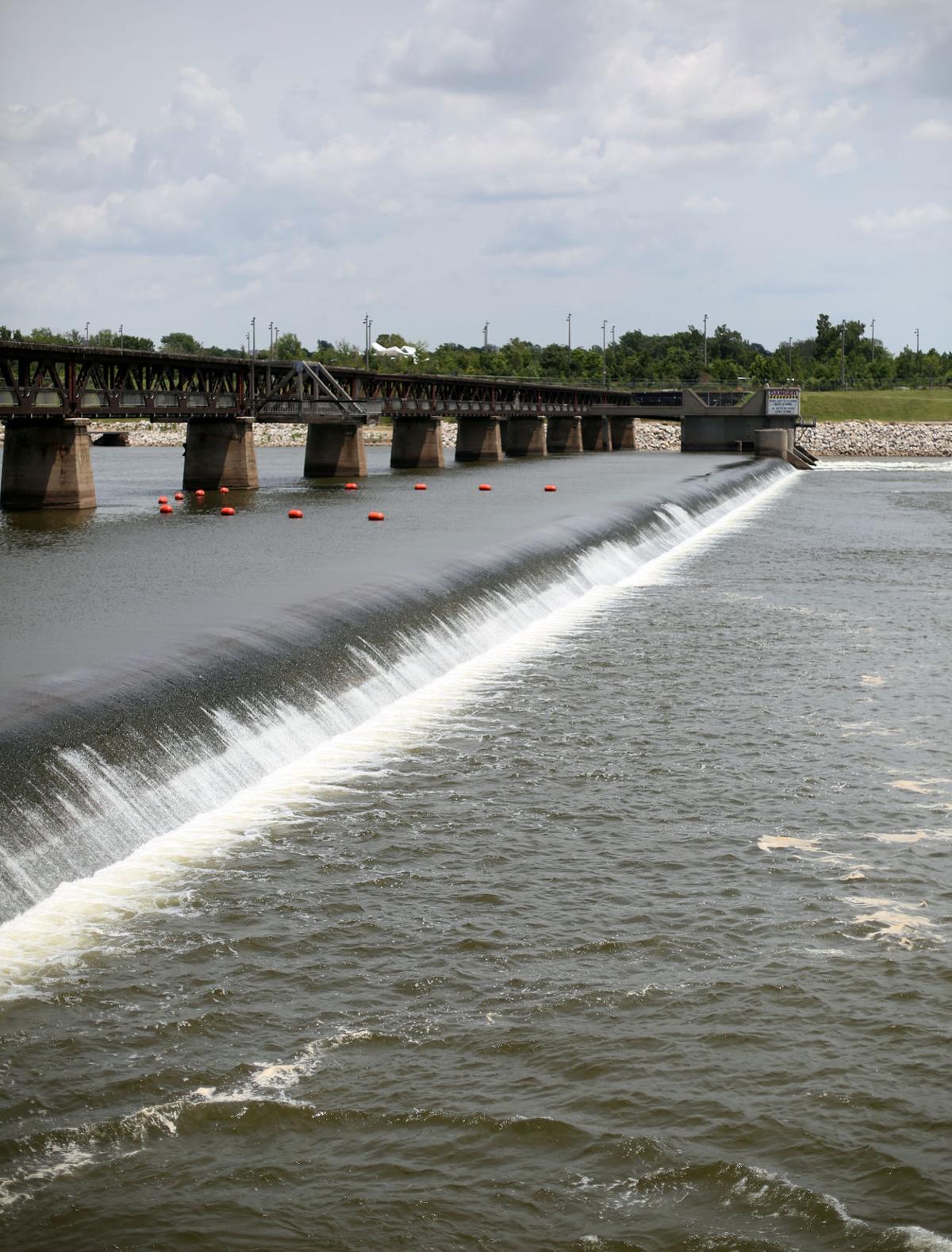 The low water Zink Dam and the base of the former pedestrian bridge span the Arkansas River near 31st Street on Monday, July 20, 2020. JOHN CLANTON/Tulsa World

Water rushes over Zink Dam, with the former pedestrian bridge above, on the Arkansas River near 31st Street. JOHN CLANTON/Tulsa World

Charles Pratt runs through his presentation in opposition to the Zink Dam for a group at Heirloom Rustic Ales. KELLY BOSTIAN/Tulsa World

The Arkansas River swirls around as it pours off of the west side of the low water dam called Zink Dam near 31st street on Monday, July 20, 2020. JOHN CLANTON/Tulsa World

Robert Jackman talks through issues about the Zink Dam from an overlook of the site at the Gathering Place. KELLY BOSTIAN/Tulsa World

The low water Zink Dam and the base of the former pedestrian bridge span the Arkansas River near 31st Street on Monday, July 20, 2020. JOHN CLANTON/Tulsa World

Charles Pratt said he has been hit repeatedly by what amounts to a freight train the past five years, yet he wants to pull more people up on the tracks with him.

His is a principal voice among a loose coalition of retired engineers, anglers and conservationists with renewed interest in the Arkansas River and a vision that is nothing like the one Tulsa voters approved as a more than $100 million part of Tulsa’s Vision 2025 bond package.

The message is ripe now, they say, because funding for the low-water dams planned for Tulsa and Jenks and for the pedestrian bridge has fallen short; the original plan is well behind schedule; and uncertainties for the city’s future abound, given the coronavirus pandemic.

They say it’s time to take a step back and rethink a project that they believe will not only fall far short of what voters were promised but possibly will exacerbate environmental hazards.

Pratt, a retired electrical engineer who worked for the U.S. Army Corps of Engineers, acknowledges that pushing a different view for the Arkansas River is quixotic, given the money aimed at the project and a public vote behind it. Tilting at windmills might in fact be easier.

“It’s like trying to stop a freight train, I know, but from the beginning the more I would look into it the more problems I would find,” Pratt said.

Along with Fred Storer, a retired engineer for Phillips Petroleum and former head of the state agency that later became the Oklahoma Department of Environmental Quality, and retired independent geologist Robert Jackman, Pratt has long been a regular at public meetings and in letters to the editor opposing the dam.

Storer said his background tells him there are environmental issues that need attention with a waterway with two miles of its western shoreline adjacent to lands with more than a century’s worth of oil production and refining history.

“We need to scrap the new dam project, remove the existing Zink dam and put what money is left into projects that could be far better for Tulsa,” Storer said.

They are trying to recruit new and more voices to help their cause.

Jake Miller, an avid angler and owner of Heirloom Rustic Ales, is one of those new helpers. He hosted a socially distanced invitation-only group at his brewery last week that consisted primarily of fly-fishermen.

“I’d call us a loose coalition of about 20 people right now who are very interested in this,” Miller said.

“I spent four or five days a week on the Arkansas River during quarantine. I’ve caught fish in there that make even my coastal friends jealous.

“Most of us that are part of this coalition have a similar story. We all love and value the river for different reasons and think it’s important that we not only protect the resource but improve it.”

To get on track with Pratt and company takes some understanding of fish biology, sorting through an unclear history of water-quality testing on the river for bacteria — in addition to underground flumes left by old oil operations — and delving into a debate about hydrology that is not only politically and bureaucratically complicated but seasonally weather dependent.

It’s a little much for the average voter to appreciate, he admits.

“The voters saw a pretty lake with sailboats and kayaks, and they liked that. Can’t blame ’em,” Jackman said.

“It’s a shame on Tulsa to have to put up with something like this. It is gross mismanagement and negligence on the city, from its engineers to its elected officials, period.”

In response to a Tulsa World email, city officials provided a document from the Oklahoma Water Resources Board that tags the waterway through Tulsa for activities such as swimming and boating as a “designated beneficial use.”

The most recent Department of Environmental Quality assessment marks the nearest stretch of the Arkansas River as “not assessed” for activities that involve “primary body contact.” Immediate tributaries to the river at Tulsa, such as Harlow and Mooser creeks, are rated “not supporting.”

Officials also pointed to a review of river flow for the past 10 years that suggests the engineering designs for the project will indeed support a kayaking flume near the Gathering Place, plus 12 miles of lake-like riverside with a Zink Lake that is 3 feet deeper and 2 miles long in operation after dams at Sand Springs and a South Tulsa/Jenks dam also are eventually constructed.

Miller and his peers said the best, least expensive and most responsible option is to remove the old Zink Dam and for Oklahoma’s congressional delegation to get involved in a makeover of the rules that govern operations of Keystone Dam to mandate water releases to preserve environmental quality.

They define that as a minimum flow of about 1,000 cubic feet per second instead of the minimum 65 cfs that now trickles through on hot summer days.

Sitting in on a presentation Tuesday, Josh Johnston, northeast region fisheries supervisor with the Oklahoma Department of Wildlife Conservation, said the city’s river plan runs contrary to what his colleagues across the country are seeing. Removal of barriers for natural fish migration and spawning is the trend, and water releases for environmental standards and recreation take priority.

Flow for successful spawning is not just a matter of having a dam with gates that can be lowered for fish to pass for a day here or there but for a matter of weeks and months, he said.

City officials said the new dam plan makes things better than they are now and that there is no legal requirement to accommodate fish.

“The existing Zink Dam is a barrier for fish migration, and while there is no mandate to require fish passage, the new Zink Dam design will increase the opportunity for fish passage,” city officials replied in the written statement.

An operational agreement is under review by the Army Corps of Engineers, River Parks Authority, Tulsa County and city of Tulsa, city officials noted.

Pratt holds that voters should have seen an operations plan before they had to vote, especially because similar promises made when the existing dam was built were not carried out.

While a new dam would be an improvement, fish likely would not benefit, and the 12 miles of shoreline and an annual economic value of more than $122 million promised to voters is a pipe dream, Pratt said.

City officials pointed to an economic study, the Tulsa Rowing Club’s newly refurbished facility on the west bank, and past history of kayakers using the river as evidence for future recreational interest.

Pratt, Storer and Jackman label the economic study flawed due to limited scope and failure to consider water-quality issues and flow.

While city, county and Corps officials may try to plan and manage the flow, a majority of the time the flow below Keystone Dam is controlled by the federal Southwest Power Administration, which is driven by its own monetary and power generation mandates, Pratt said.

“The bottom line is that the river is not going to look much different,” Pratt said. “If they open the gates for fish migrations in the spring, about the time people start coming out and walking the trails, people will be looking out there and saying, ‘Where’s our lake?’ ”