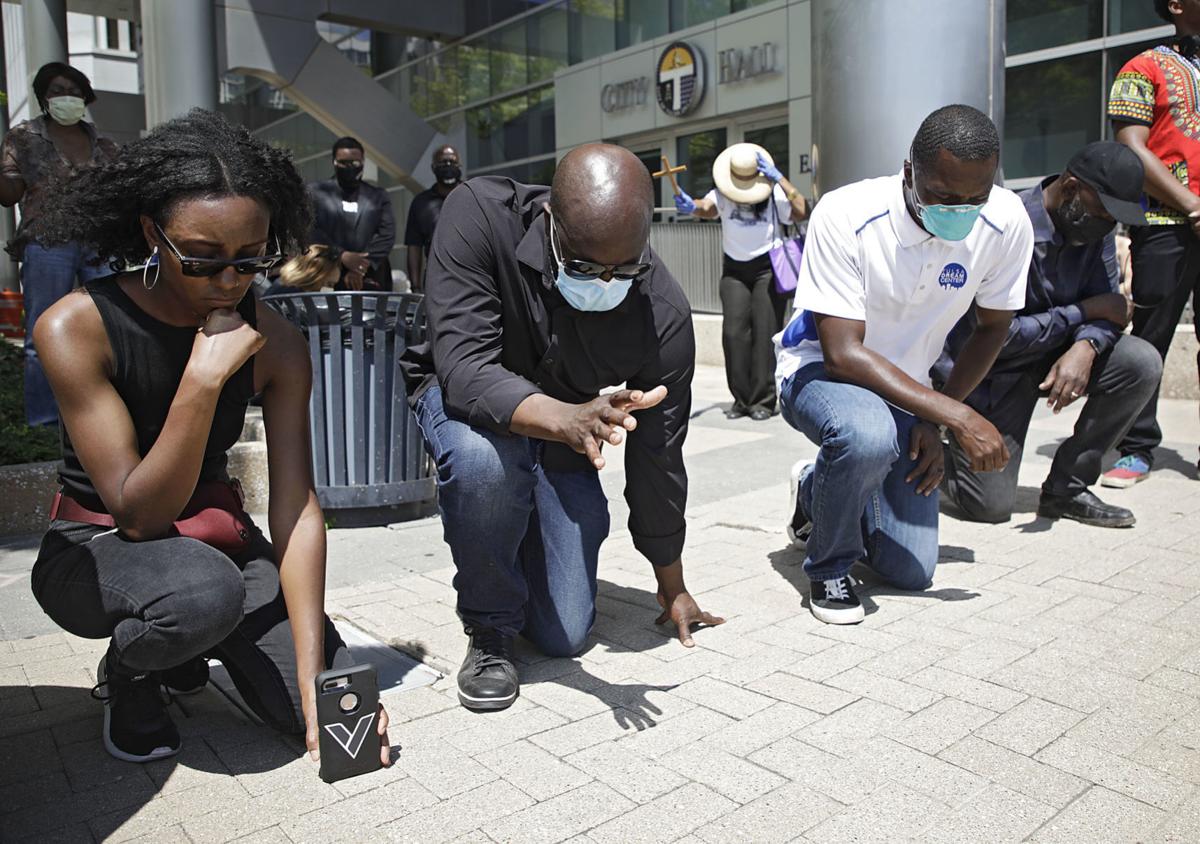 Emonne Markland (from left), Stephan Markland, Tim Newton and others pray in front of Tulsa City Hall during the Unity Over Violence Prayer March on Monday. MIKE SIMONS/Tulsa World 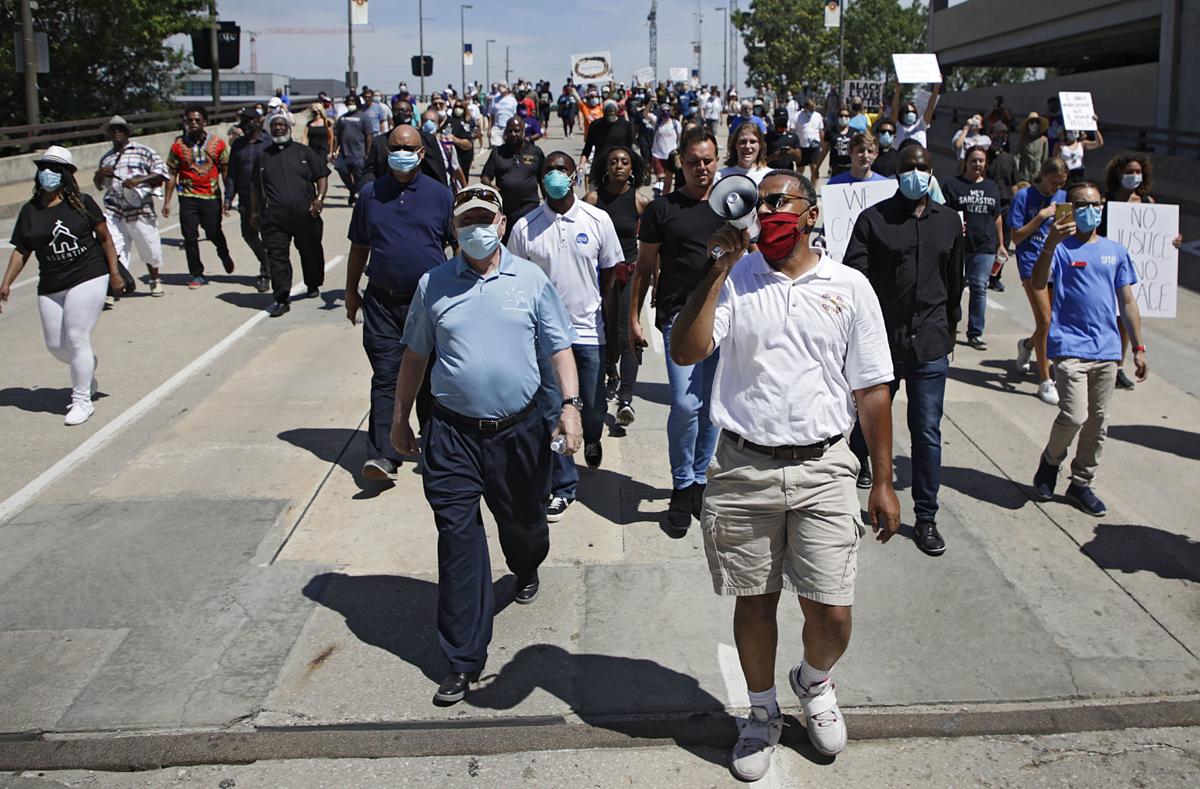 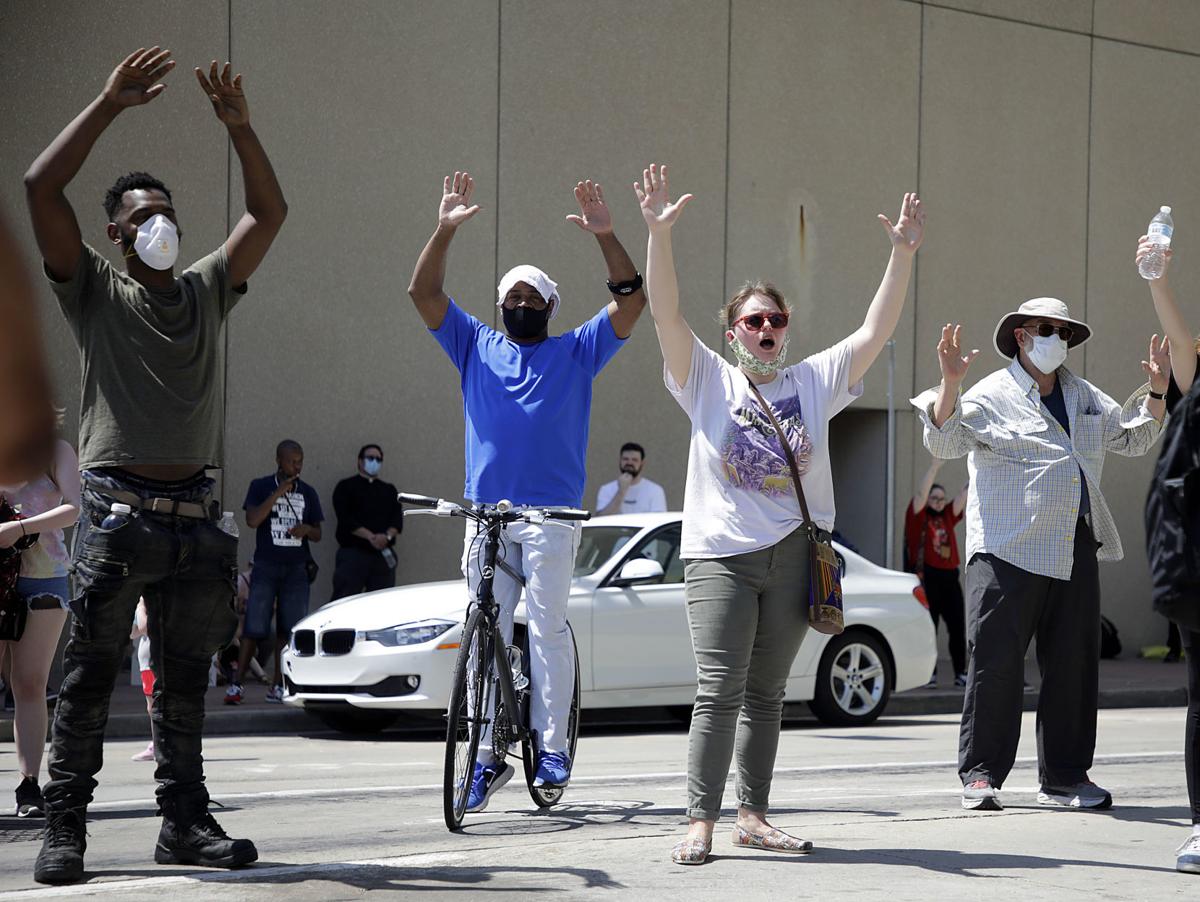 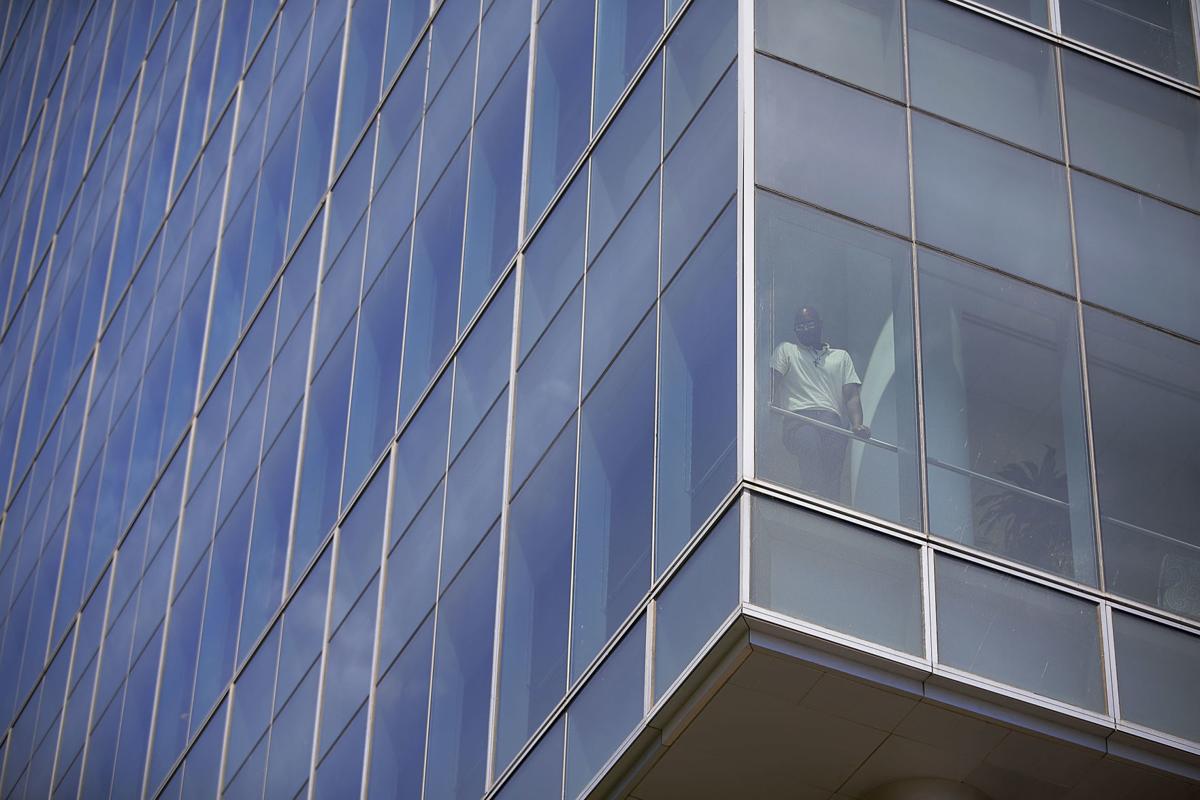 A man looks out of a window in the building that houses Tulsa City Hall during the Unity Over Violence Prayer March Monday, June 8, 2020. MIKE SIMONS/Tulsa World 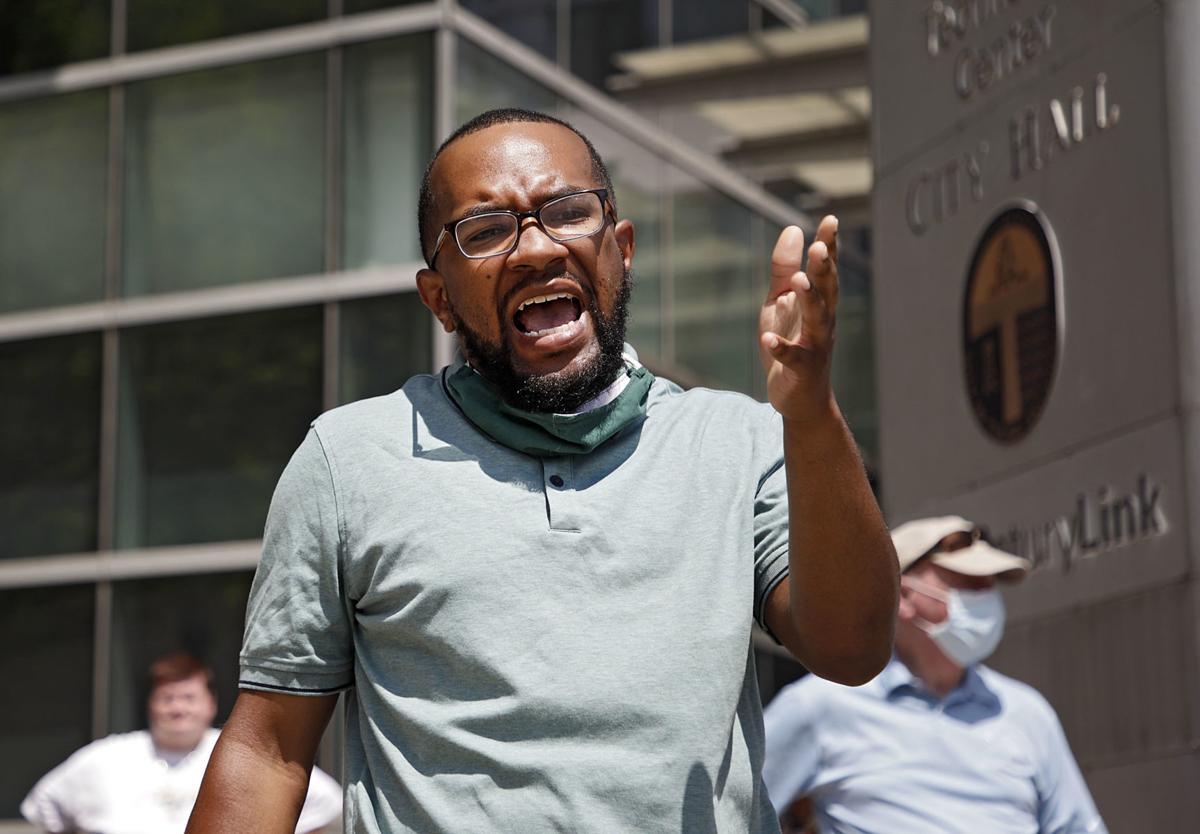 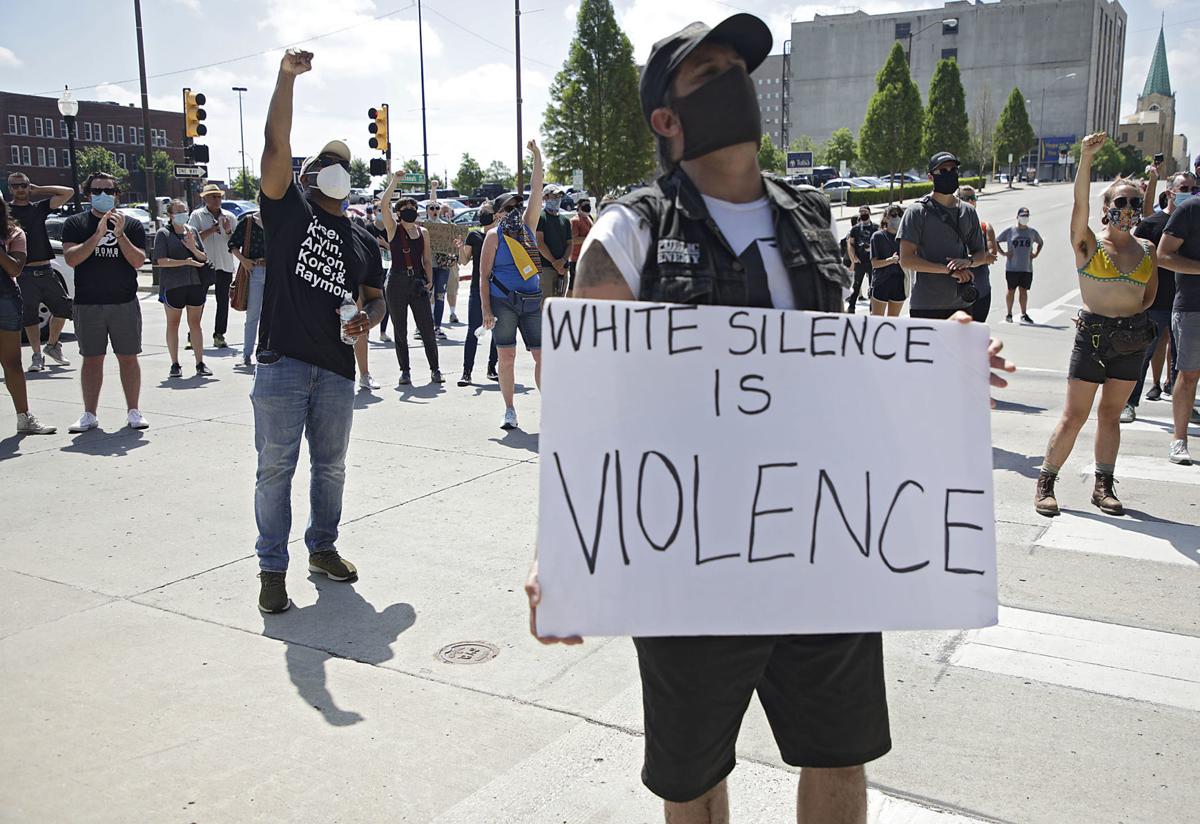 Ray Owens(left) and others protest in the intersection of 2nd Street and Cincinnati Ave. in front of City Hall during the Unity Over Violence Prayer March Monday, June 8, 2020. MIKE SIMONS/Tulsa World 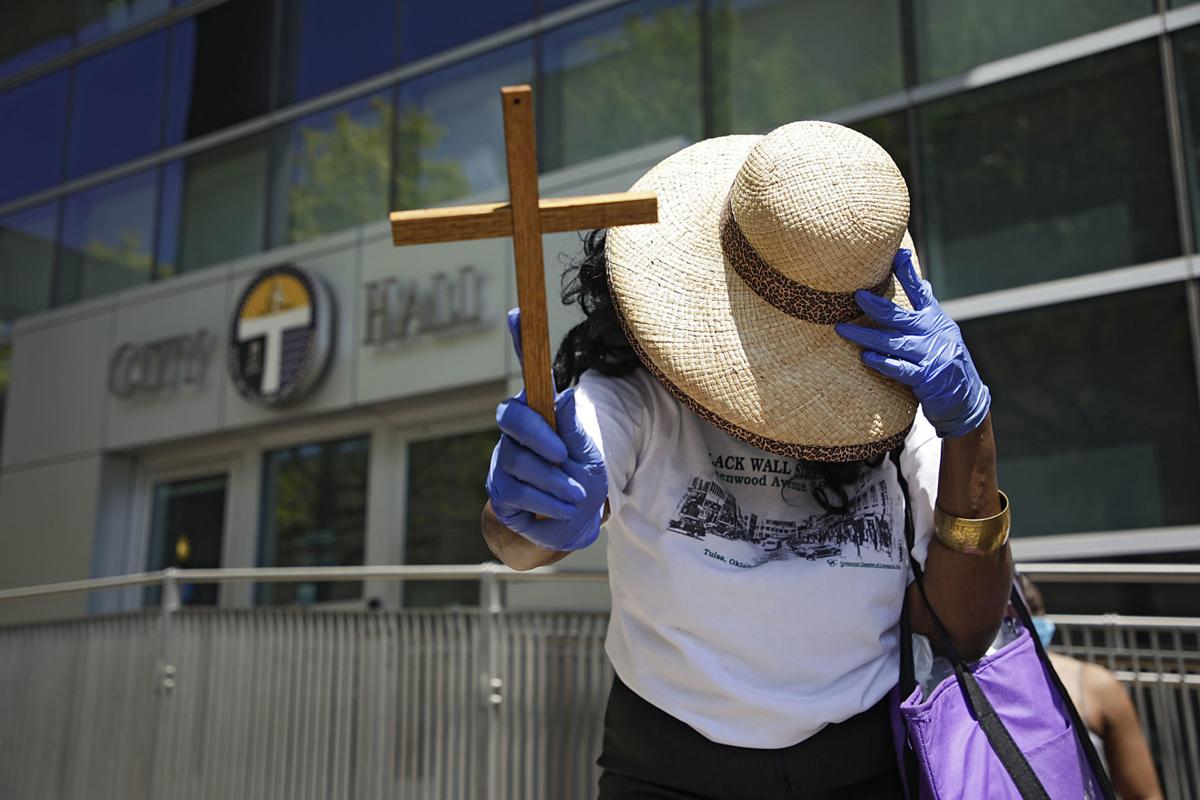 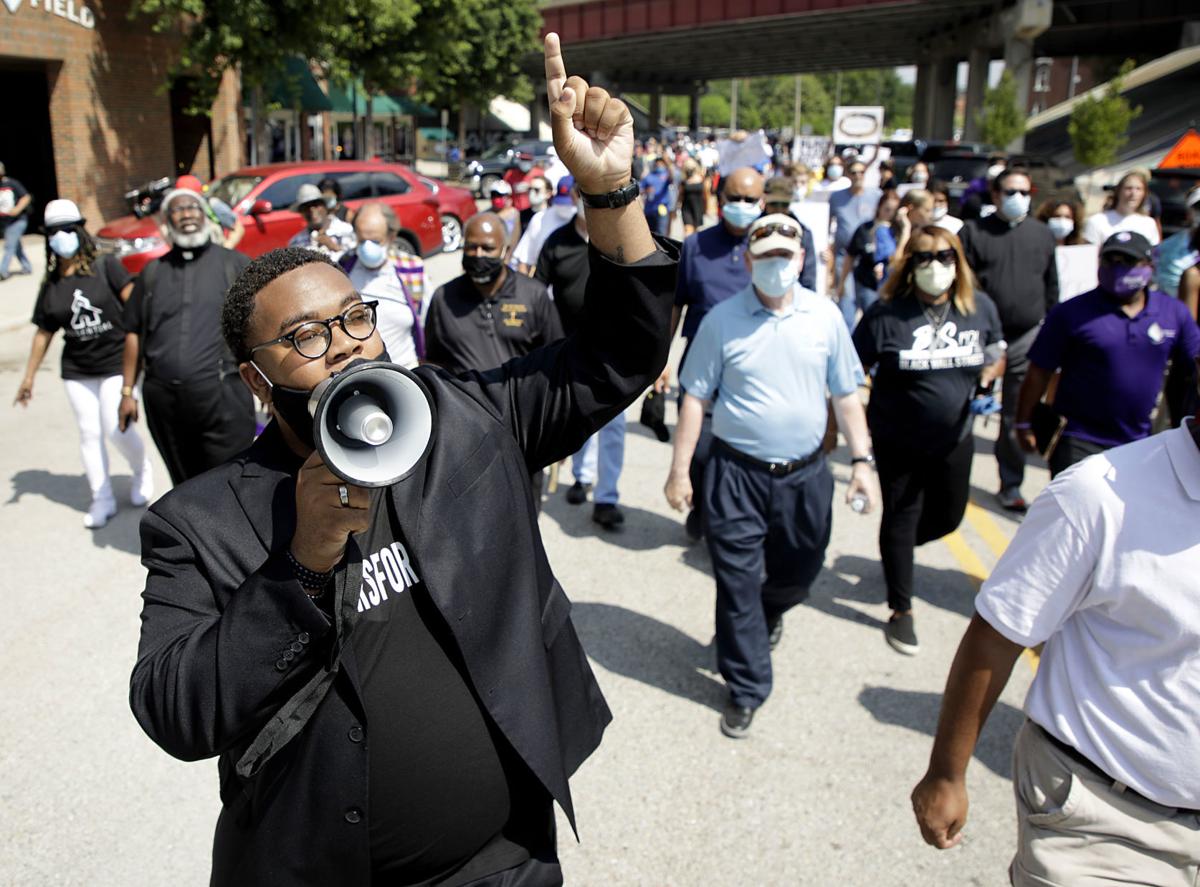 A group of ministers and others from Tulsa’s various faith communities marched on City Hall on Monday to pray for justice and racial healing while continuing a call for police reform.

The Unity Over Violence Prayer March began Monday morning at the Greenwood Cultural Center with several speakers addressing the crowd before more than 300 marchers walked the mile-long route to converge on City Hall.

The Rev. C.J. Neal, march organizer, said Greenwood was chosen as the starting point because it was the site almost 100 years ago of the Tulsa Race Massacre.

“The ground you are standing on is hallowed ground,” Neal told the crowd. “In 1921, because of hate, because of fear, because of jealousy, people lost lives, property and, in a sense, a community, because people did not stand up and say, ‘This is not what we are about.’ ”

Joining Neal, the Rev. Warren Blakney said the recent video of George Floyd’s death under the knee of a Minneapolis police officer was an all too painful reminder of the violence he witnessed firsthand during the 1960s civil rights marches in the South.

“As I sat there watching, I could hardly hold back the tears. Because I saw my grandchild. I saw my son. I saw every child in the church where I preach,” said Blakney, of North Peoria Church of Christ.

“We can’t keep quiet anymore,” he added. “What I encourage us to do today and tomorrow and the next day and the day after that is if all you’ve got is your voice, then use your voice.”

In his comments to marchers, former Tulsa Police Chief Drew Diamond, executive director of the Tulsa Jewish Federation, called out both Mayor G.T. Bynum and the city’s police union.

“We have a mayor who says racially biased policing is not real, that thousands of citizens of this city who are black or brown — that their testimonies are not true,” Diamond said. “We have a Fraternal Order of Police that comes out and says we don’t need any oversight.”

Diamond added: “All politics are local. All policing is local. This is about us. This is about what we want to do in Tulsa, Oklahoma. And this is about saying to the mayor, ‘It’s time, Mr. Mayor, you become accountable.’”

Activist Greg Robinson, an organizer of the recent We Can’t Breathe protest in Tulsa, fired up the crowd at City Hall, leading a chant of “Hands up. Don’t shoot.”

Robinson reiterated the demands of police reformers in Tulsa, including the need for an Office of the Independent Monitor. He said having that office would’ve helped after the death of Terence Crutcher, who was fatally shot by then-Tulsa Police Officer Betty Shelby in 2016.

“Betty Shelby didn’t get convicted not because she wasn’t guilty,” Robinson said. “The reason was because there wasn’t a system of oversight and accountability to ensure that there was a real, adequate investigation into the killing. That’s why we must have an Office of the Independent Monitor.”

Prayer was a central part of the event, both before and after the march. Among the several ministers who led prayers outside City Hall was the Rev. Layla Caldwell.

“We thank you, Father God, for allowing us to come together as one. United we stand; divided we fall,” said Caldwell, pastor of Agape Outreach Ministries.

The Rev. Paul Daugherty of Victory Church, one of Tulsa’s largest congregations, addressed the crowd before he prayed.

“There is no superior race,” he said. “We are all family of God.

“I want to repent (for) the sins that have happened in our nation that have come from white people towards black people,” Daugherty added. “I want to pray right now specifically for Tulsa, for what happened almost 100 years ago, and that God will bring healing in our city.”

Daugherty led a march in south Tulsa for racial healing on Sunday.

Neal said he asked Daugherty to be a part of the march Monday “after hearing his words yesterday. And the first words out of his mouth were: ‘What do you need? What can I do? I’m ready to be of service.’ ”

“That’s what we need,” Neal added. “We need people who are ready to focus on making change.”

The march was organized in part so that he and the other ministers could speak with “one voice,” Neal said.

“We are standing together to say that we want change,” he added.

“It is our duty not just as citizens, but it is our moral obligation, to make sure each and every individual that lives in these United States has the right to live without fear of dying.”

Gallery: People gather to protest outside the Tulsa Police Department

Protestors gathered at Ator Elementary in Owasso Friday for a peaceful march down 86th Street toward Owasso High School.

Amid chants of “Black lives matter” toward the march’s end, friends Ryan Phillips and Dominique Hamilton paused to offer their thoughts on why…

Emonne Markland (from left), Stephan Markland, Tim Newton and others pray in front of Tulsa City Hall during the Unity Over Violence Prayer March on Monday. MIKE SIMONS/Tulsa World

A man looks out of a window in the building that houses Tulsa City Hall during the Unity Over Violence Prayer March Monday, June 8, 2020. MIKE SIMONS/Tulsa World

Ray Owens(left) and others protest in the intersection of 2nd Street and Cincinnati Ave. in front of City Hall during the Unity Over Violence Prayer March Monday, June 8, 2020. MIKE SIMONS/Tulsa World