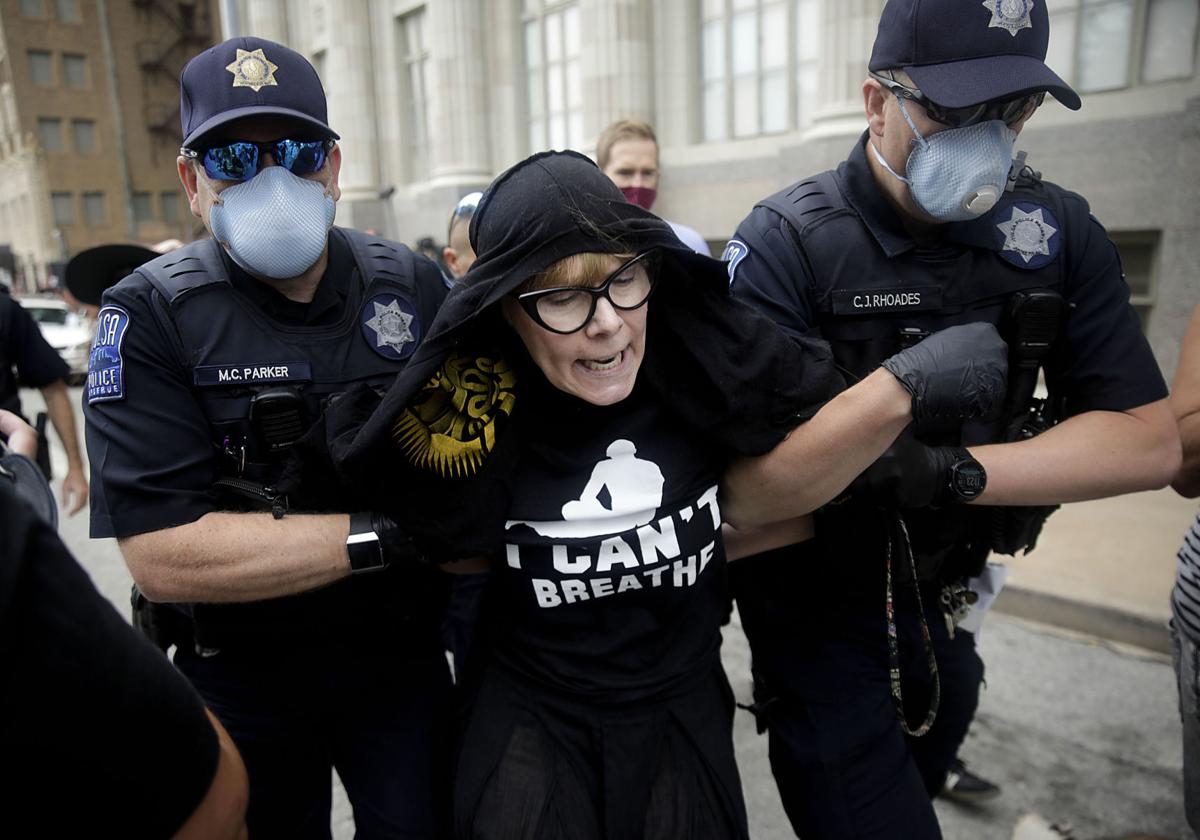 Tulsan Sheila Buck was one of six people arrested on June 20 during the campaign rally for President Donald Trump. Police later said Trump campaign staff had asked them to remove her from the secure area of the rally. 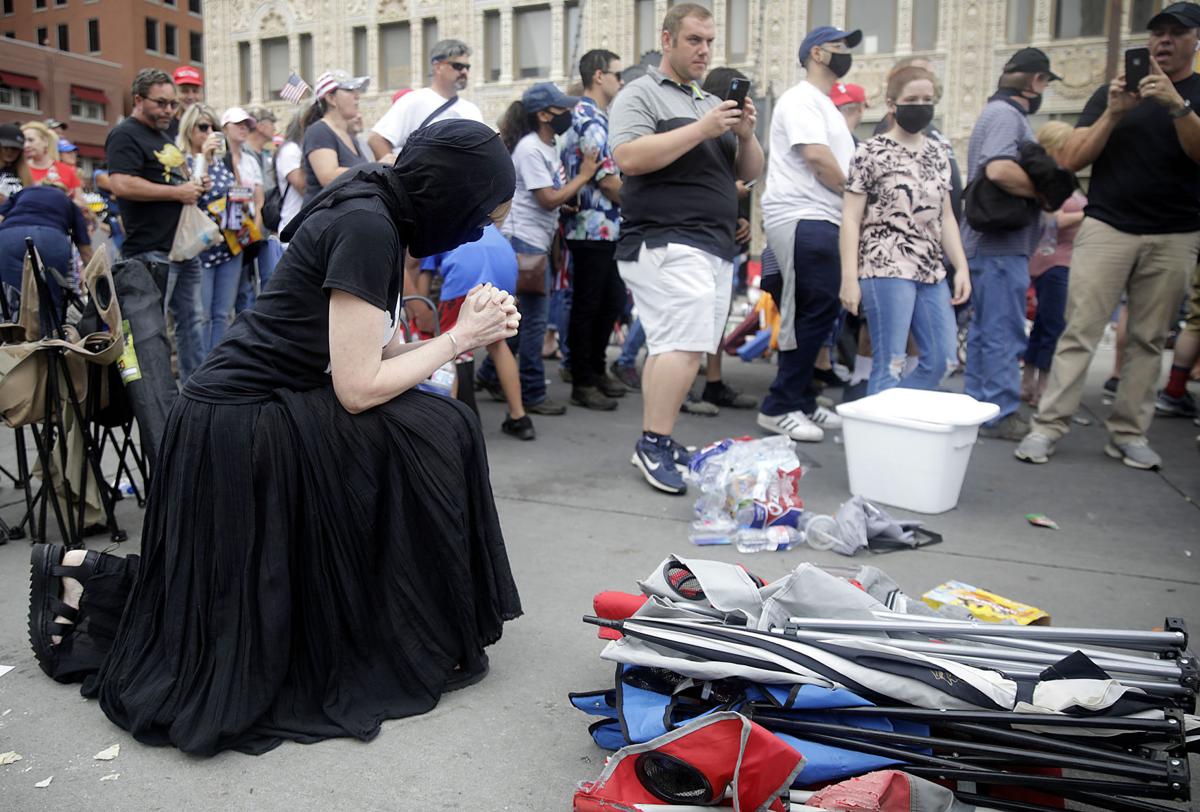 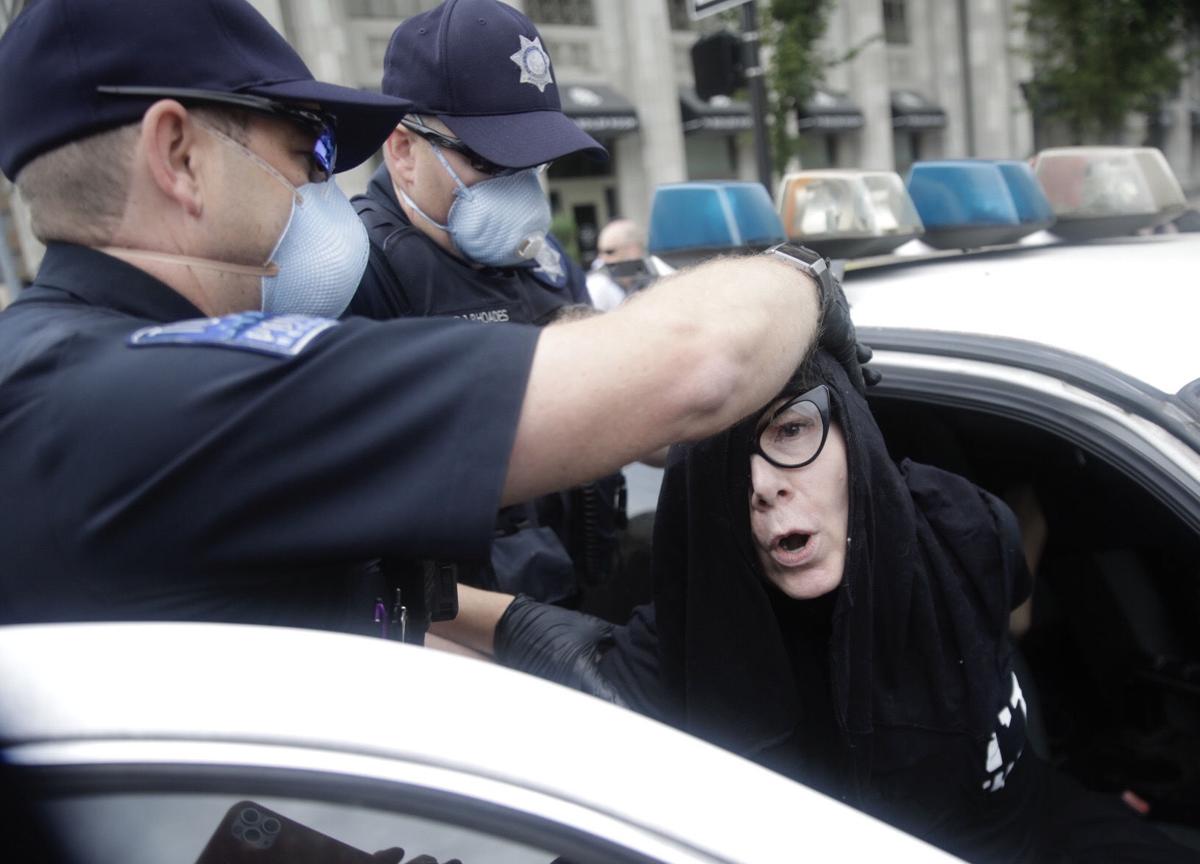 Tulsa police officers arrest protester Sheila Buck at President Donald Trump’s June 20 rally in Tulsa. Police later said there was a request by Trump Campaign Staff to remove her from the secure area of the rally.

A Tulsa police sergeant who oversees the agency’s special event planning and a member of President Donald Trump’s private campaign security team were behind the directive to arrest a local teacher before Trump’s June 20 Tulsa campaign rally.

Newly released Tulsa police body camera footage shows the arrest of Sheila Buck, who sat inside the event perimeter while wearing an “I Can’t Breathe” T-shirt as an act of protest.

Officers arrested her on an obstruction complaint at the behest of a member of Trump’s campaign security staff after she refused multiple requests to leave the area of Fourth Street and Cheyenne Avenue, which was within a fenced perimeter surrounding the BOK Center.

Buck — whose arrest was shown live on MSNBC — said previously that she had a ticket to attend the rally and, clad that day in a T-shirt stating “I Can’t Breathe” and a face covering, also had a First Amendment right to protest police brutality.

“I understand you’re doing your job, but you know this is wrong,” Buck tells Officer Matthew Parker just before the 14-minute mark in Parker’s more than hour-long body camera footage released Monday.

Buck is an art teacher at Tulsa’s School of St. Mary.

“I’m not here to debate with you whether it’s right or wrong. I’m just — my job is to provide the law and order around the event, OK?” Parker says. “And when you refuse to leave and when I ask you to leave as well and you refuse my order to leave, that’s when you’re placed under arrest.

“I’m not saying you have to agree with it, but I wanna make sure you understand where I’m coming from and what, you know, that I’ve explained it to you.”

Parker is earlier heard telling Buck that he “really would rather not” have to arrest her for trespassing, but he said he would if she refused police orders to leave because “I’m being told by my chain of command” to do so.

After Buck expresses fear at the end of the footage about entering a jail transport van due to claustrophobia, an unidentified officer is heard telling her to “suck it up” and saying, “If you have claustrophobia issues you shouldn’t be doing stuff that gets you arrested.”

Body camera footage indicates the “chain of command” Parker described referred largely to Sgt. Chris Witt, a member of the Tulsa Police Honor Guard and a leader of special events coordinating for the department.

However, he later tells Edwards, “Hopefully I don’t have to ask you questions” about the matter after Edwards says, “You know who we are, man.”

Edwards, of Brooklyn, New York, is listed as a prosecution witness on the misdemeanor obstruction charge the Tulsa County District Attorney’s Office filed on Friday. A prosecutor alleged Buck committed obstruction against Parker by “refusing to leave a private event and refusing legal commands.”

An initial court appearance is set for Thursday morning.

Parker is first heard on the more than hour-long video telling another officer he spoke to Witt about Buck’s not wanting to leave and said Witt told him, “Remove her and arrest her for trespassing.”

After notifying Buck that he was going to physically remove her, Parker and another officer grab Buck’s arms to escort her from the area before they handcuff her and place her in the passenger seat of a patrol car.

“There’s like a million cameras on us,” Parker says a few minutes later after they arrive at the Tulsa Police Department’s downtown headquarters. “What are we supposed to do with her? Are we going here (the Tulsa Municipal Jail) or do we have to go to (David L.) Moss (the Tulsa County jail)?”

Buck reported multiple times that the handcuffs were painful, and Parker told her how to sit more comfortably before later asking another officer for help loosening them.

Parker is heard telling Buck on at least three occasions that the campaign had a permit with the city of Tulsa that included control over the fenced perimeter. However, Mayor G.T. Bynum’s office told the Tulsa World before the rally that “Mayor Bynum did not sign a contract, an agreement or issue a City permit as this was coordinated through the event organizer and venue management firm.”

Michelle Brooks, a spokeswoman for the city, said the campaign did not need a permit due to an exemption in the city’s ordinance on special events.

“Under Title 37, activities conducted by governmental agency acting within the scope of its authority are exempt from the special event permit requirements,” Brooks said in a written statement to the World. “As to whether this was a private campaign event or a federal government activity, the answer is both — where the secret service and other government agencies were providing and coordinating security for the President, who happened to be attending a private campaign rally.”

Dan Smolen, Buck’s attorney, told KOSU in June that his client did not break anything on the list of rules the Trump campaign sent out to rallygoers, nor was there a restriction preventing her from wearing a T-shirt with a message promoting racial justice.

Buck is also heard on the video telling the officers they are “damaging my rights” by taking her to jail when she had an event ticket and had violated no laws.

Smolen has said he plans to pursue a civil action on Buck’s behalf over the circumstances of her arrest. He did not respond to a request for comment by Tuesday evening.

“I feel like I gave you multiple opportunities to peacefully leave and not be arrested, and you told (us) that you decided that you would not leave, you would refuse to leave, and you were, um, that was your stance,” Parker told Buck during the encounter.

“So therefore I had to do what I had to do, which was place you under arrest for trespassing because the people that had a permit for the area had uninvited you from the event, ticket or no, (and) had asked you to leave.”

The reporter interrupted the president to ask about Tulsa: "Why would you have wanted a huge crowd?" Trump's response: Tulsa was "a very good area at the time" and the pandemic scare was "pretty much over."

Tulsan Sheila Buck was one of six people arrested on June 20 during the campaign rally for President Donald Trump. Police later said Trump campaign staff had asked them to remove her from the secure area of the rally.

Tulsa police officers arrest protester Sheila Buck at President Donald Trump’s June 20 rally in Tulsa. Police later said there was a request by Trump Campaign Staff to remove her from the secure area of the rally.