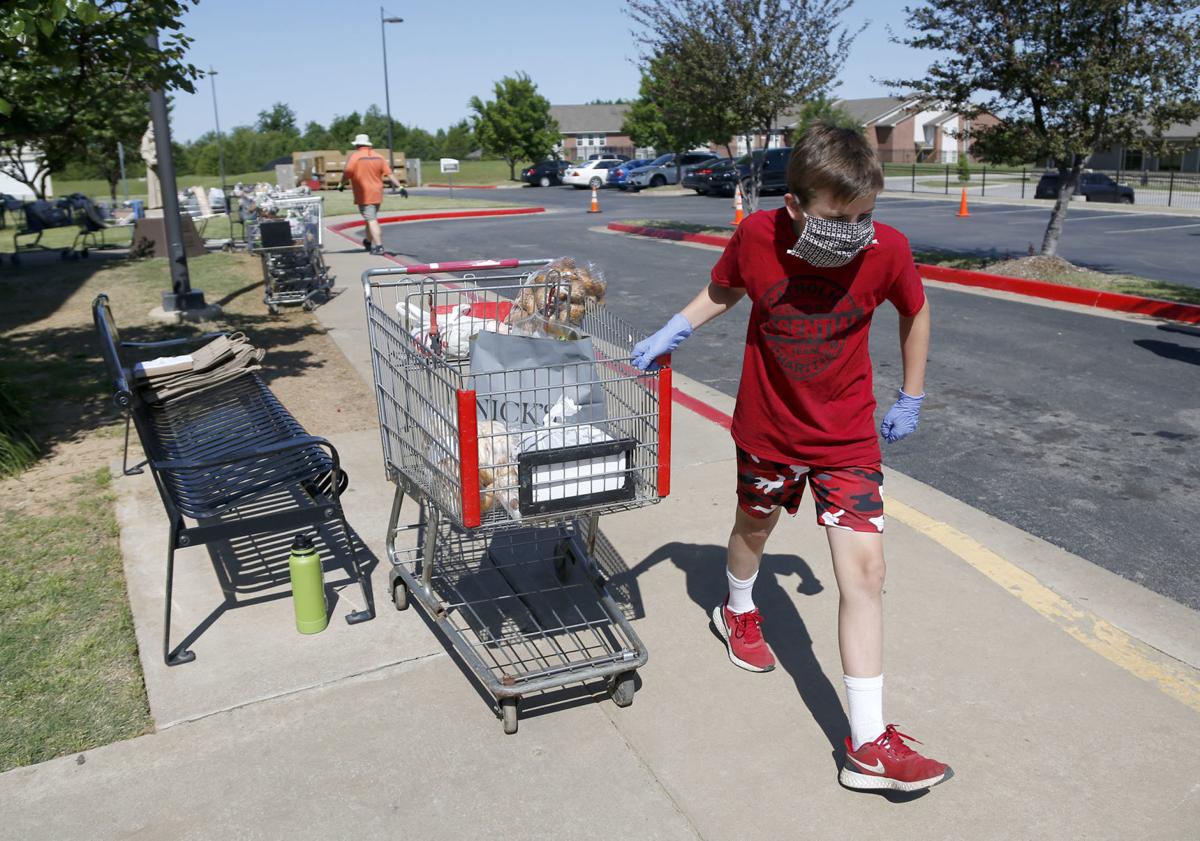 Volunteer James Blankenship brings a cart with food to be distributed at Catholic Charities of Eastern Oklahoma’s food pantry in May. 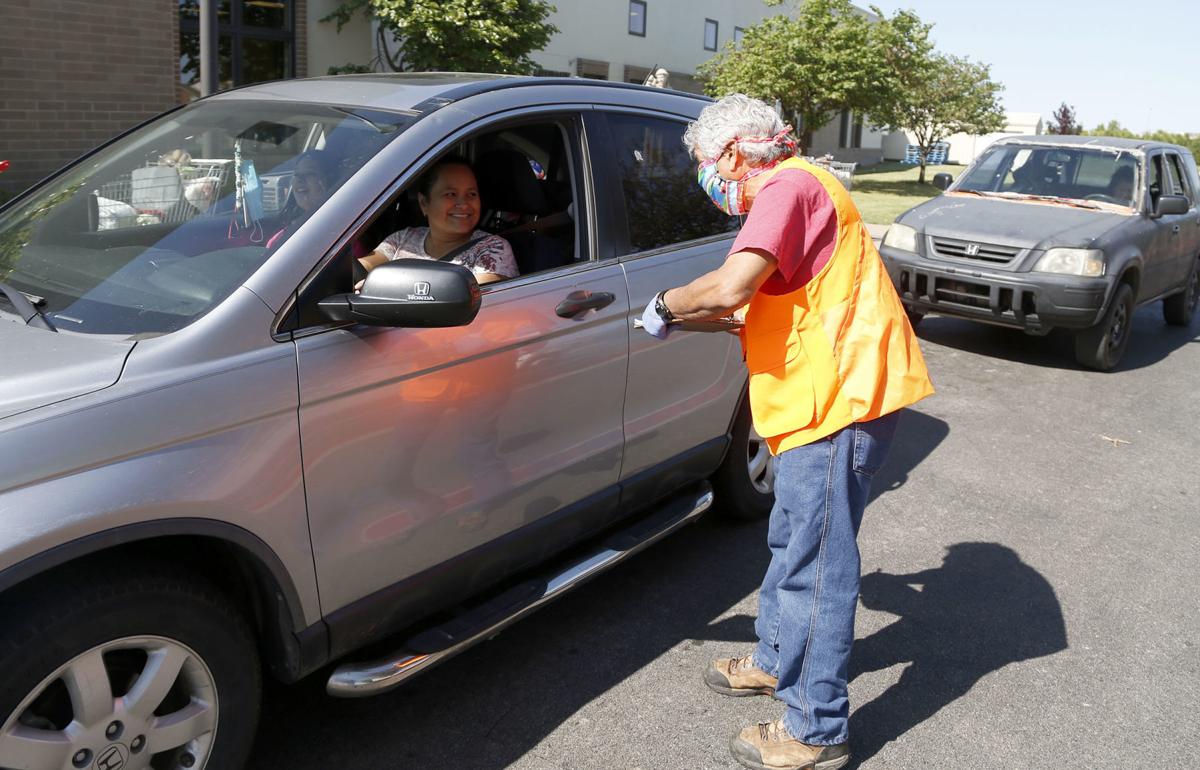 Felix Cuellar talks with Doris Bonilla at Catholic Charities of Eastern Oklahoma's food pantry that is handing out food to people in need in Tulsa, OK, May 6, 2020. STEPHEN PINGRY/Tulsa World 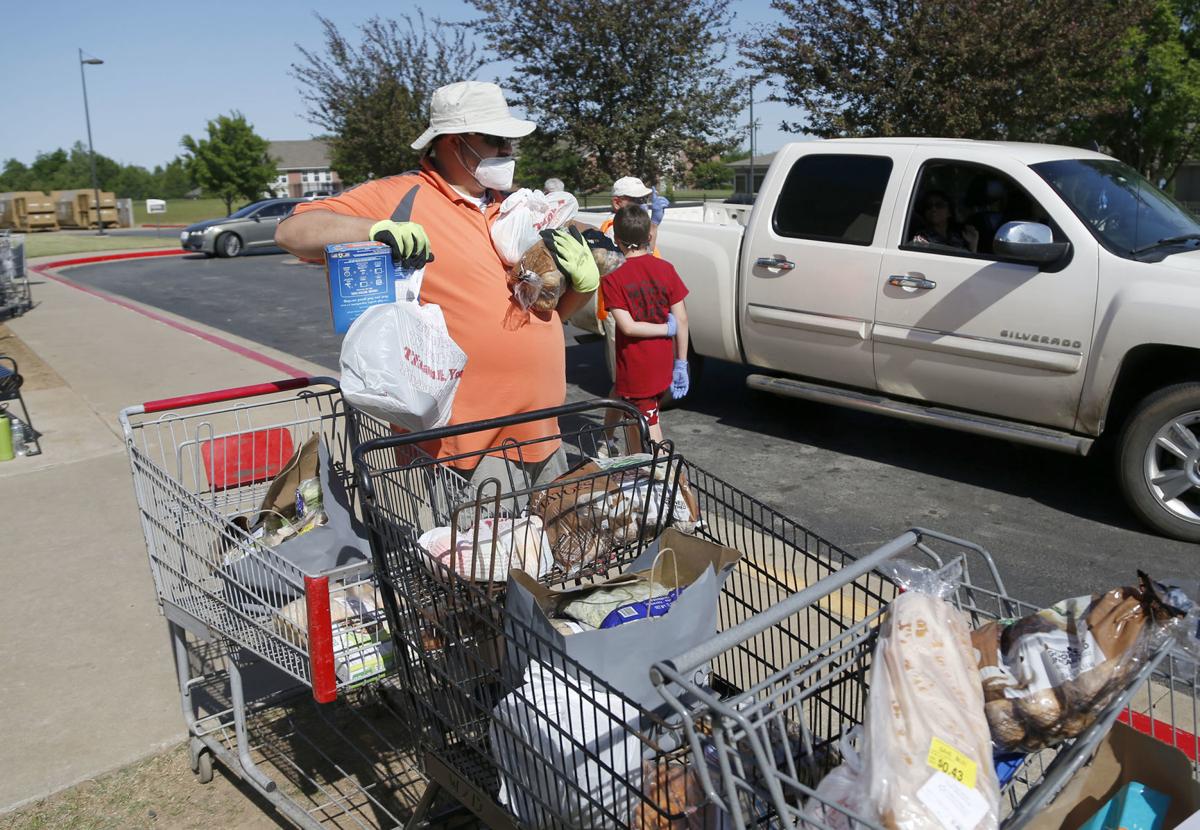 Volunteer Glen Discer takes food to a family at Catholic Charities of Eastern Oklahoma’s food pantry on Wednesday. The pantry shifted to a drive-thru service in March as a safety precaution during the COVID-19 pandemic. STEPHEN PINGRY/Tulsa World

Before each cart of food could be wheeled out to a waiting vehicle, it first had to get past Jennifer Blankenship.

“My job is to make sure they have everything they are supposed to have,” said the volunteer as she glanced over the contents of another cart on Wednesday at Catholic Charities’ drive-through food pantry in Tulsa.

“It includes meat, produce, baked goods and a sweet — a baked cake or something like that,” added Blankenship, one of nearly 30 volunteers who were on hand at the pantry, 2450 N. Harvard Ave.

She and the other volunteers are staying busier than ever these days, they say, keeping those food donations flowing in and out.

Due to a big spike in demand from the COVID-19 pandemic, Catholic Charities of Eastern Oklahoma’s Tulsa food pantry has been serving five times the normal number of families, officials said.

The pantry, which shifted to a drive-thru service in March as a safety precaution, previously was providing groceries to around 300 families weekly.

Now it does more than that in a day, for a total of around 1,500 over its four-day week.

“I just did the invoices and for April, we probably moved 200,000 pounds of food,” said the Rev. Craig Victor, distribution center manager for the organization, the state’s largest distributor of food to the poor.

“The need has been eye-opening,” he said.

On top of that, the organization’s five other food pantry locations in eastern Oklahoma have also seen a spike in demand, serving another 1,500 families between them.

“Most of these are not our normal clients,” Victor said. “Probably 80% of them are new to us.”

To keep up with the surge, support has been vital, charity officials said. Credit in particular, they added, goes to Community Food Bank of Eastern Oklahoma.

A current surplus at the Food Bank helps keep the food pantry stocked at a decreased cost or, in some cases, at no cost.

Meanwhile, Walmart donations have kept the pantry supplied with fresh produce, and include occasional meat, eggs, dry goods, snacks and cereal, as well.

In addition, financial support from individuals, foundations and businesses has provided much-needed help with expenses.

The pandemic also created a volunteering issue. Catholic Charities boasts more than 4,500 volunteers, but due to age or other health-related risk factors many have been forced out of action, officials said.

Fortunately, others have stepped in.

Blankenship is one of them. A former lawyer who volunteers with the organization’s immigration legal department, she moved over to the food pantry when the pandemic forced her department to close.

And she didn’t come alone. She said three of her four children have regularly joined her, and she’s often brought along a niece or nephew, as well.

Her son James, a fifth-grader, was with her Wednesday.

“I’m really happy he gets to be out there,” she said of James, who helped load food into cars.

“My children have a very privileged life,” she added of why she wants them to be involved. “We try to take our faith seriously, and part of our faith is putting it in action, and helping. It’s not just worshiping God, it’s serving the community. It’s being his hands — God’s hands.”

Another volunteer, Mark Concienne, began volunteering with the pantry and warehouse five years ago after retiring from his job.

“I’m really impressed with the amount of food we’re able to give them,” he said Wednesday as he helped load waiting cars. “It’s very well-rounded. It’s got all the staples.”

“You don’t always get the same thing,” added Blankenship.

“It depends on what time of the day it is and what’s in the warehouse. Sometimes they have the most beautiful things come out — strawberries, tomatoes.”

Blankenship said the “generosity of the community” during the pandemic will never be forgotten.

“People have really answered the call,” she said.

For the latest list of hours and services available and for information on how you can help, go to cceok.org.

Volunteer James Blankenship brings a cart with food to be distributed at Catholic Charities of Eastern Oklahoma’s food pantry in May.

Felix Cuellar talks with Doris Bonilla at Catholic Charities of Eastern Oklahoma's food pantry that is handing out food to people in need in Tulsa, OK, May 6, 2020. STEPHEN PINGRY/Tulsa World

Volunteer Glen Discer takes food to a family at Catholic Charities of Eastern Oklahoma’s food pantry on Wednesday. The pantry shifted to a drive-thru service in March as a safety precaution during the COVID-19 pandemic. STEPHEN PINGRY/Tulsa World