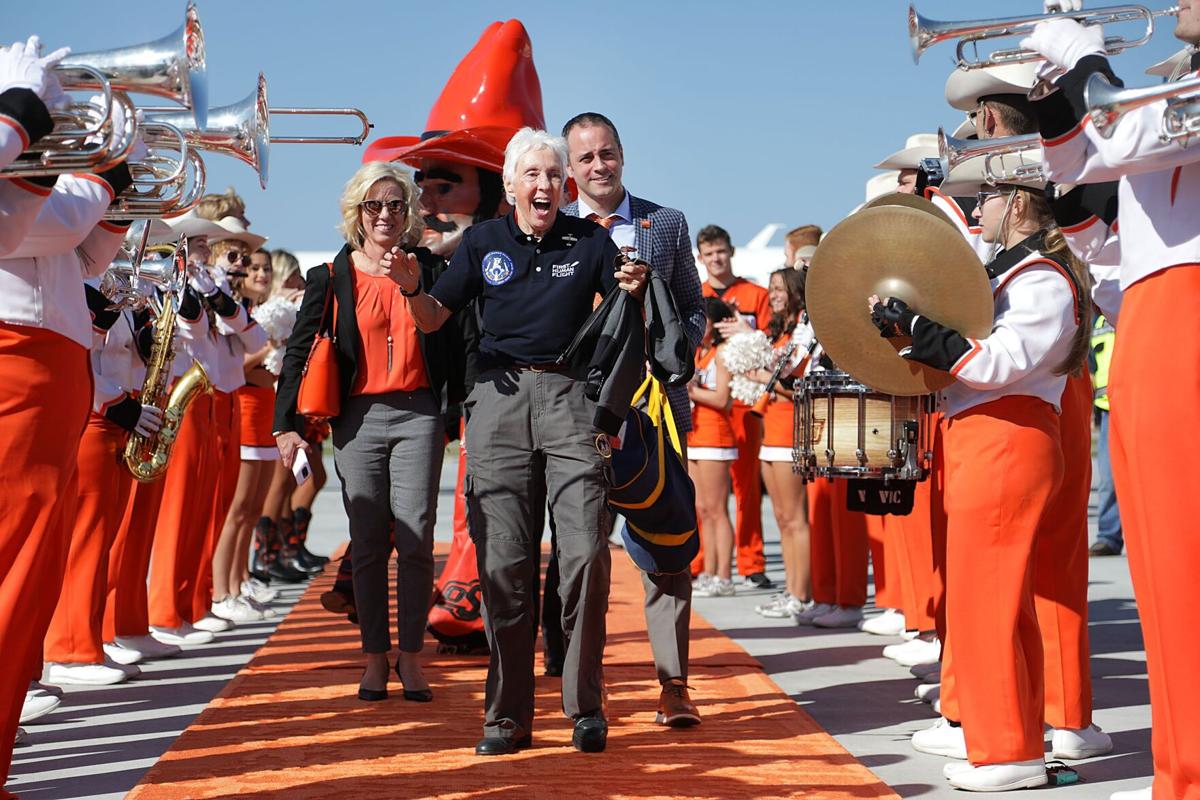 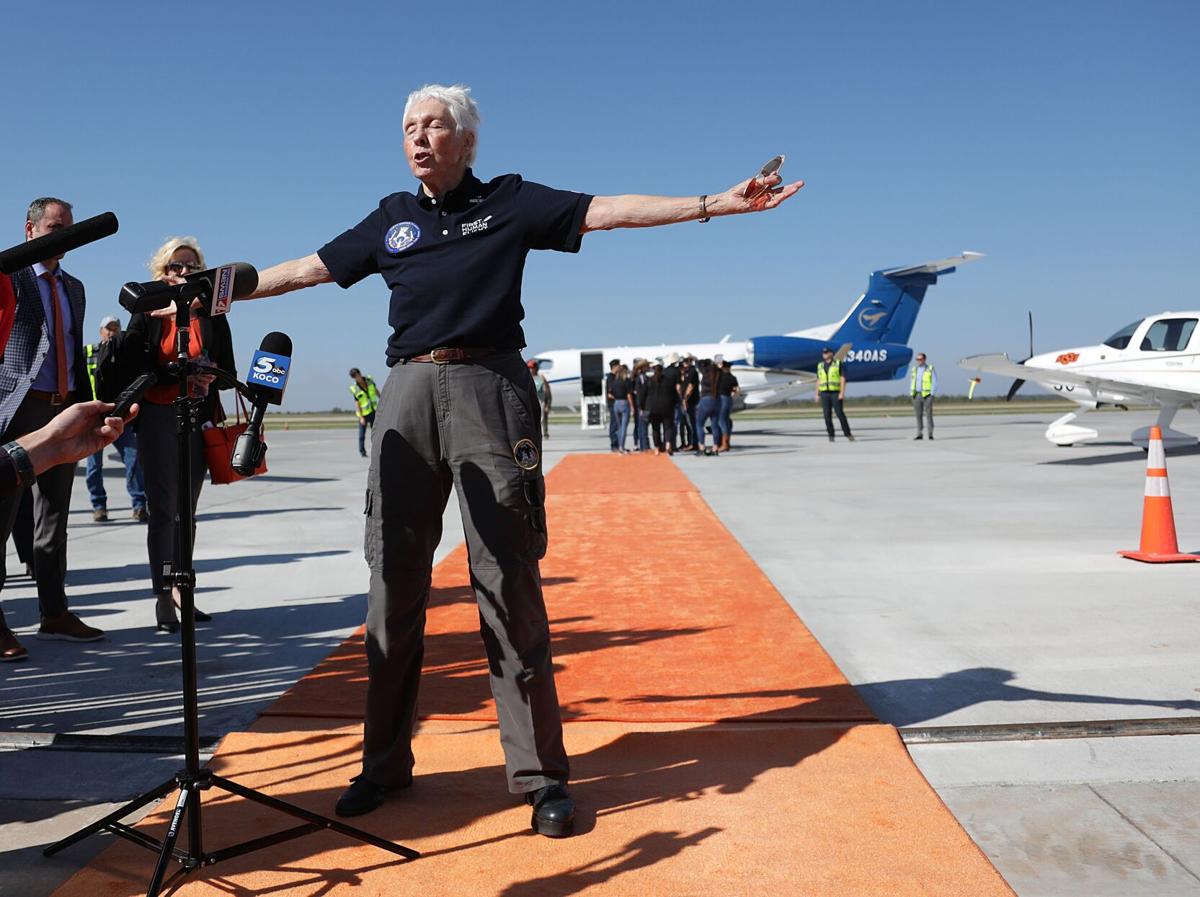 Wally Funk describes flying in space as she speaks to reporters at Stillwater Regional Airport. 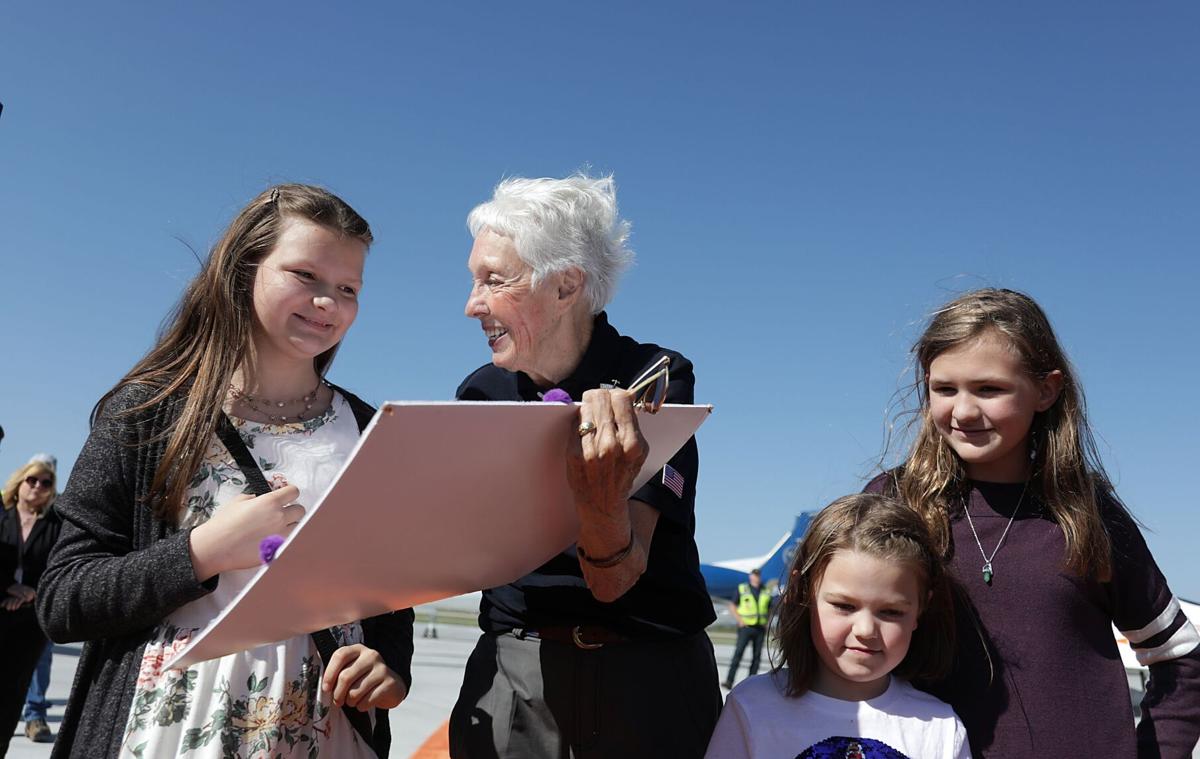 Wally Funk signs a poster for 10-year-old Lilly Cribbs, who aspires to be an astronaut, scientist and engineer, at Stillwater Regional Airport on Monday. At right are Lila Hatchcock, 6, and Vivien Ivey, 11. Funk, and 82-year-old OSU alumna, recently flew into space on the Blue Origin. 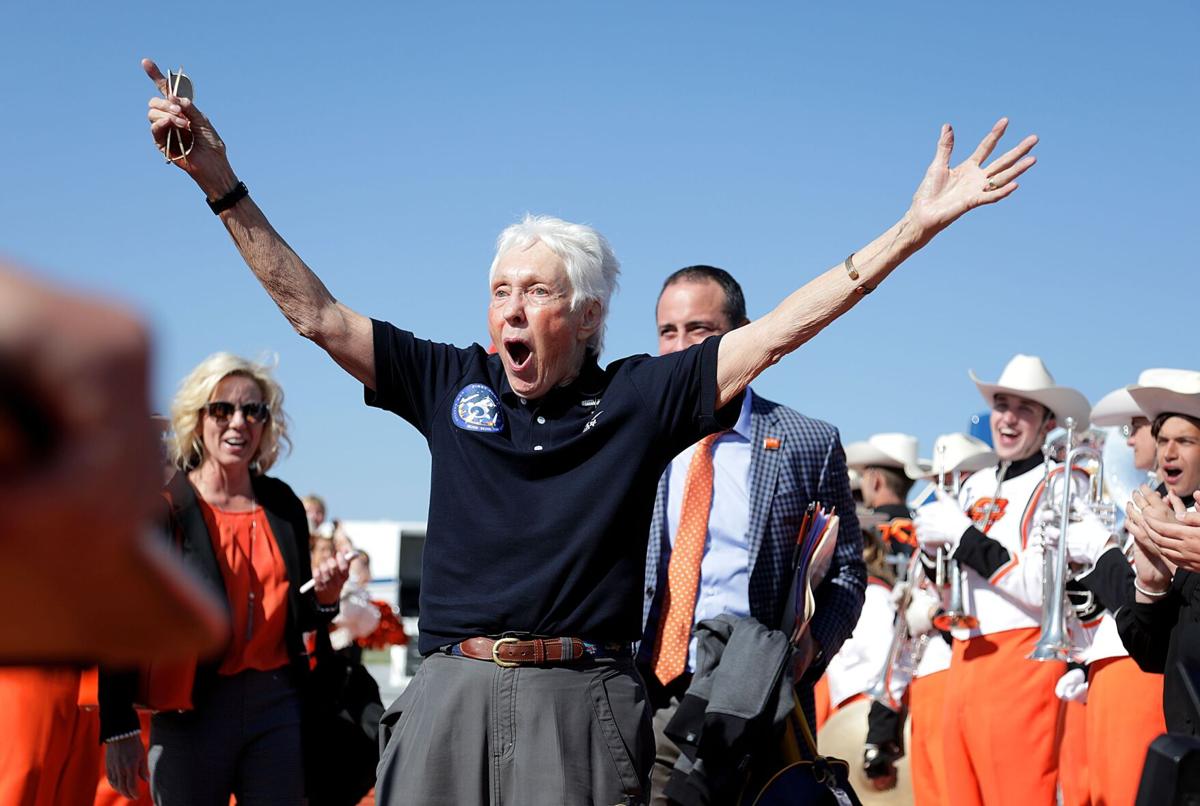 Wally Funk reacts after she stepping off an airplane and making her way down the orange carpet at Stillwater Regional Airport on Monday, Funk, 82, recently flew on the Blue Origin space flight.

STILLWATER — If Wally Funk can orchestrate her next move as well as she conducted the band assembled in her honor Monday, the famed “Mercury 13” member just might have a shot at finding a way aboard the International Space Station.

The aviation pioneer landed at Stillwater Regional Airport about three months after she returned from her first suborbital spaceflight alongside Jeff Bezos on his Blue Origin rocket. Funk, who graduated from OSU in 1960 and became the oldest person to fly into space at age 82, described her experience as fantastic and said her eyes are set on an even loftier goal.

“I want to get up to the International Space Station — ISS,” Funk said. “That’s what I’ve wanted to do all my life is to go to ISS.”

Funk is one of the 13 female pilots who comprised the Mercury 13, similarly named to the country’s first seven male astronauts — the Mercury 7 — selected by NASA for its space program infancy in the early 1960s. The women, who took as many of the astronaut tests completed by their male counterparts as they were allowed, weren’t chosen by NASA for its program because of their gender.

Funk named Eileen Collins — the first woman to pilot the space shuttle and later command one of its missions — and acknowledged other female astronauts who were able to reach space before she did.

She said NASA wouldn’t take her on because she lacked an engineering degree among her many credentials. Instead, Funk cheered on the women astronauts at launches from the sidelines.

“I’m telling all of you that want to make something of yourself — get that engineering degree, and talk to youngsters that want to do things in space,” Funk said while standing on an orange carpet rolled out on the tarmac Monday afternoon before her Q&A that evening with Oklahoma State University’s president.

“I’ve done everything out there. I’m the tomboy; I didn’t do girl stuff. I wanted (to go to space), but I didn’t realize I should have had an engineering degree.”

Funk is serving as an inspiration to at least one young girl in Stillwater who showed up to see the aerospace icon return to her alma mater.

Lilly Cribbs, 10, held up a colorful sign that welcomed Funk. She was able to meet Funk and pose with her for pictures.

Funk drew her a heart and wrote “you” below it, signing it with her first name.

Afterward, Lilly said she planned to hang it in her room. She called the experience “awesome” and said she has always wanted to be an astronaut, scientist and engineer.

“The fact that I get to go to space and see Earth,” Lilly said of why she wants to be an astronaut.

Lilly’s mother is Jennifer Cribbs, an associate professor of math education in OSU’s College of Education and Human Sciences.

Cribbs said she and her daughter often watch space programs on television. Cribbs recalled when an astronaut visited her third-grade class and inspired her.

“I’m super excited for (Lilly) because I see so much potential now for her to be able to get into these fields that weren’t always accessible for women,” Cribbs said. “To see these role models — to see women doing these things — I think is wonderful.”

Funk brought energy and excitement to spare when she stepped off the private jet that brought her to Stillwater.

She shouted surprise at the OSU cheerleaders and dance team members who greeted her, as well as pretended to conduct band members. “I used to play in the band!” she said.

“I can’t believe you all are here,” Funk exclaimed.

In recounting her “fantastic” flight, she said she climbed up the ladder to the rocket when some expressed doubts that she could at her age.

Funk said she has taken off on many jets and done “a lot of space stuff,” but never had she gotten to shoot straight up off the ground.

In microgravity, she said, weightlessness allowed her to “do anything I wanted to do.” She marveled at the engineering that went into the rocket.

“You all, I cannot believe that there was never a bump — even when the parachutes came out,” Funk said.

Astronauts and cosmonauts compete in Olympic-style events aboard the International Space Station.

Fighting what Greece's prime minister has called "natural fury without precedent," firefighters continued their response on the Greek island o…

A storm cell over northern Illinois on Aug. 9 resulted in multiple tornadoes touching down, and AccuWeather's Tony Laubach was there as they h…

The National Weather Service has received reports of tornados in the suburbs north of Chicago. Meteorologist Kevin Donofrio says the reports w…

London Zoo's newest lioness was given a treat on Monday (August 9) to mark World Lion Day that takes place on Tuesday (August 10).

Tourists flock to the coastal town of Mendocino for its Victorian homes and cliff trails, but visitors this summer will also find dozens of si…

This tiny robot rolls inside the body and provides localized medications

They’re calling it MANiAC and it might surprise you.

A wildlife ranger captured amazing footage of an endangered basking shark as it swam along next to him. Craig Nisbet, 42, spotted a shark fin …

Wally Funk describes flying in space as she speaks to reporters at Stillwater Regional Airport.

Wally Funk signs a poster for 10-year-old Lilly Cribbs, who aspires to be an astronaut, scientist and engineer, at Stillwater Regional Airport on Monday. At right are Lila Hatchcock, 6, and Vivien Ivey, 11. Funk, and 82-year-old OSU alumna, recently flew into space on the Blue Origin.

Wally Funk reacts after she stepping off an airplane and making her way down the orange carpet at Stillwater Regional Airport on Monday, Funk, 82, recently flew on the Blue Origin space flight.