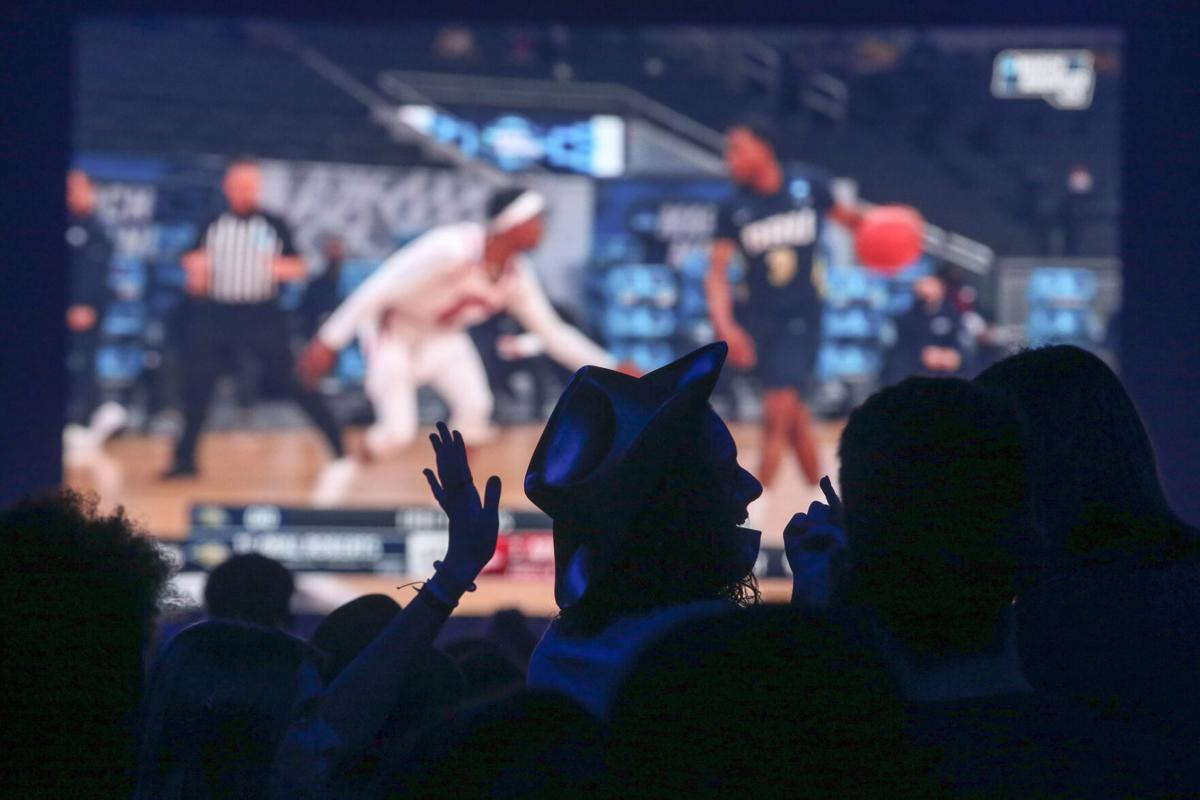 Fans cheer at a watch party in Tulsa for ORU in the Sweet Sixteen. ORU lost 72-70. 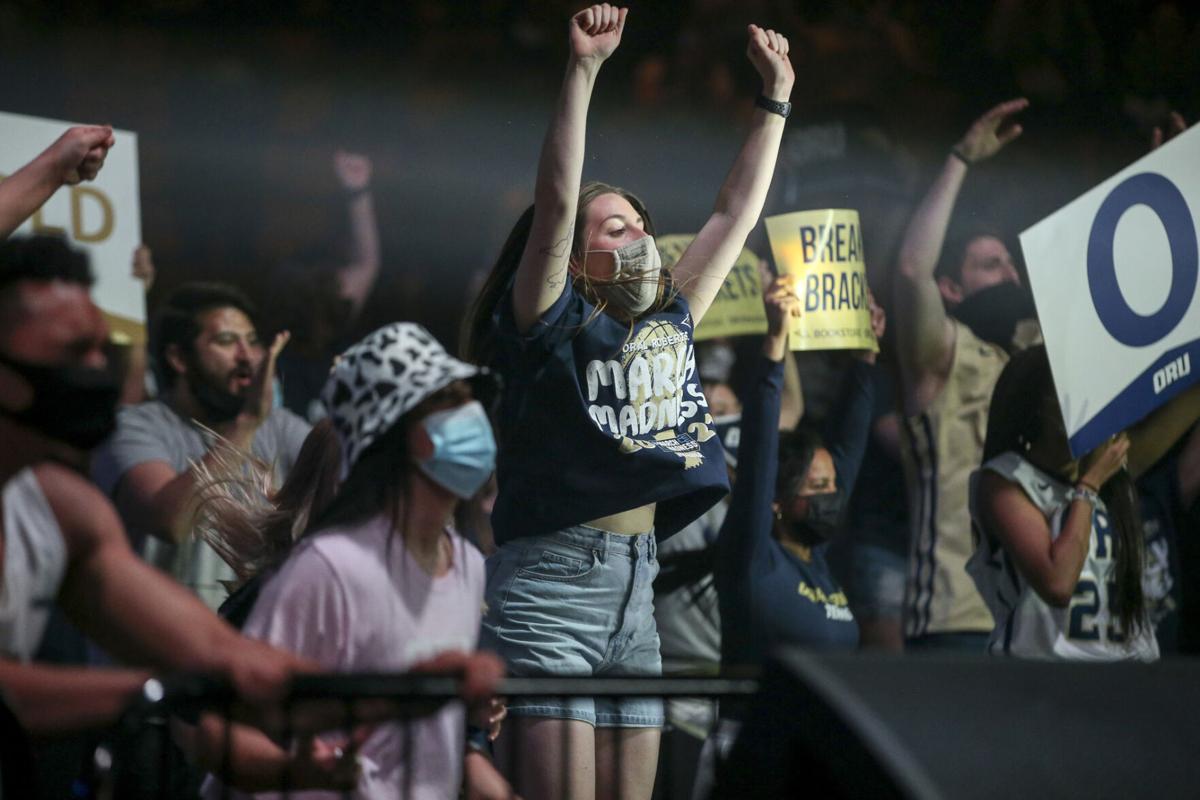 MaryJane Murphy of Overland Park, Kansas, cheers after a made basket during an ORU watch party at the Mabee Center for their Sweet Sixteen game against Arkansas. 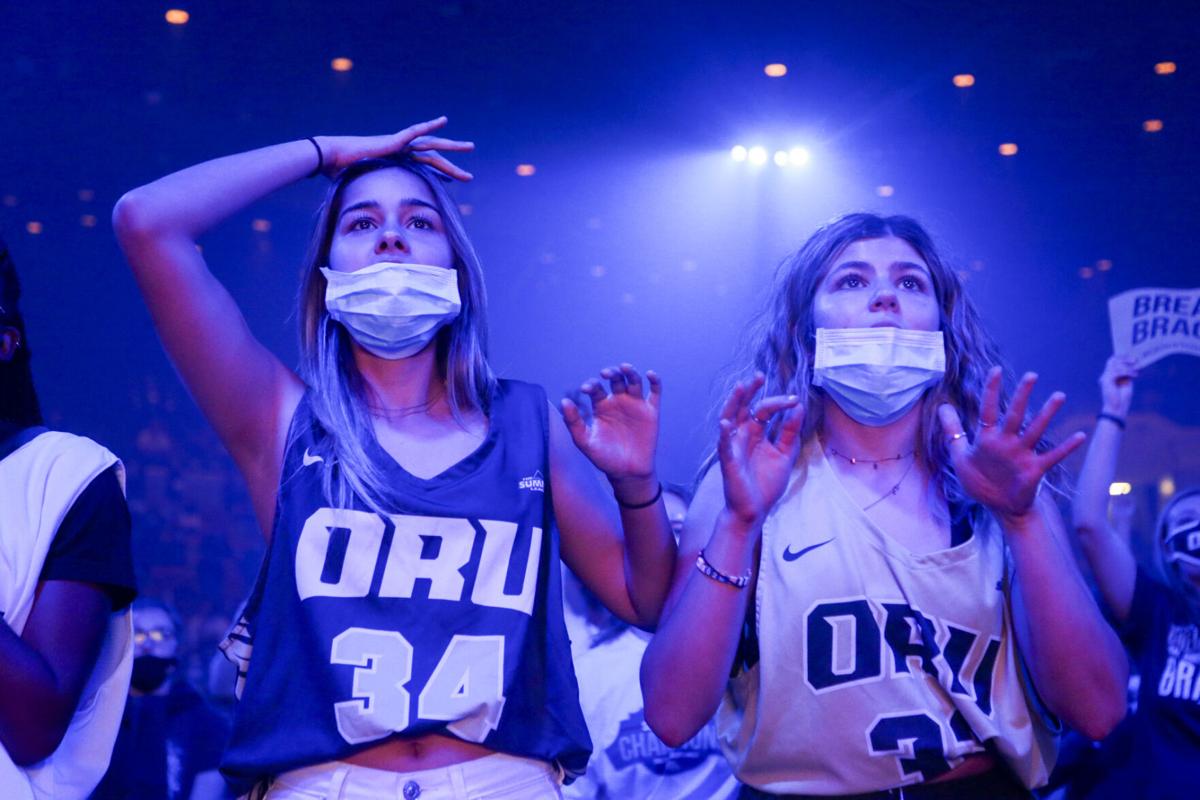 Becca Coelho of Katy, Texas, and Alexia Wetter of Springfield, Illinois, react during an ORU watch party on Saturday. 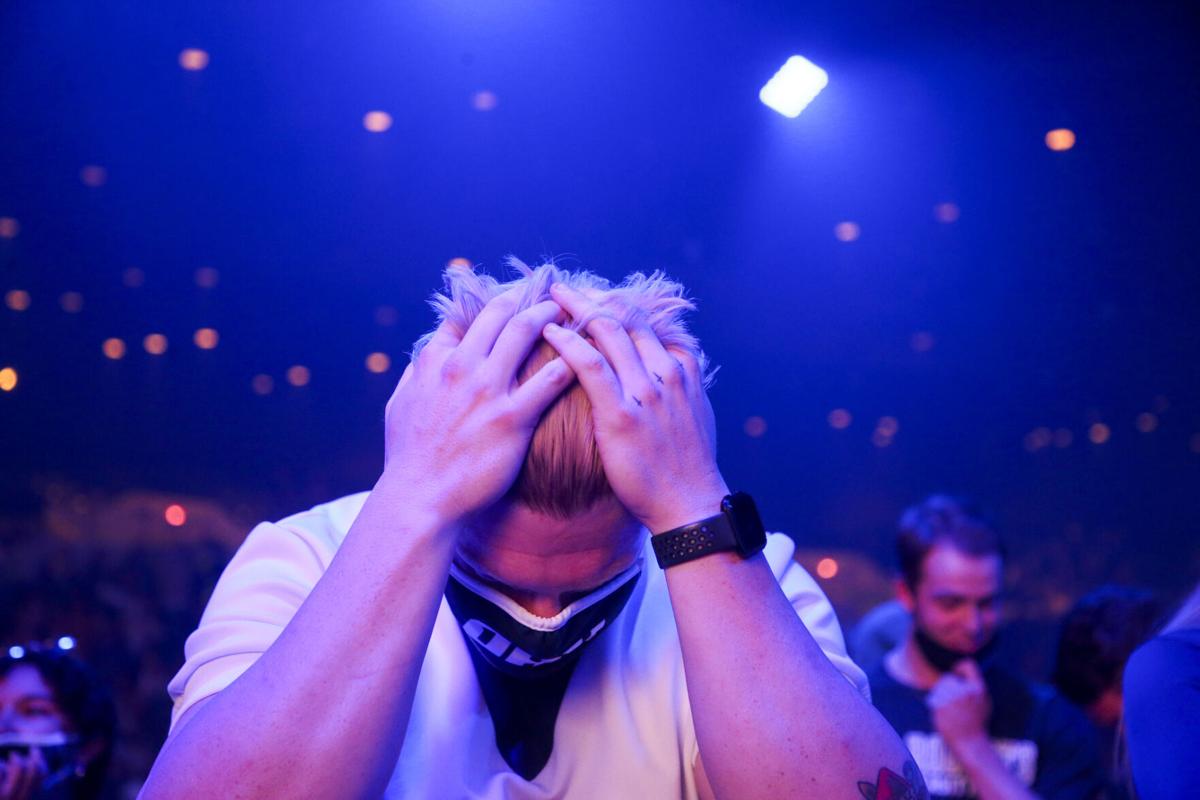 Evan Flotron of St. Louis, Missouri, reacts after ORU misses a a last-second shot during a watch party at the Mabee Center. Arkansas won the game 72-70. 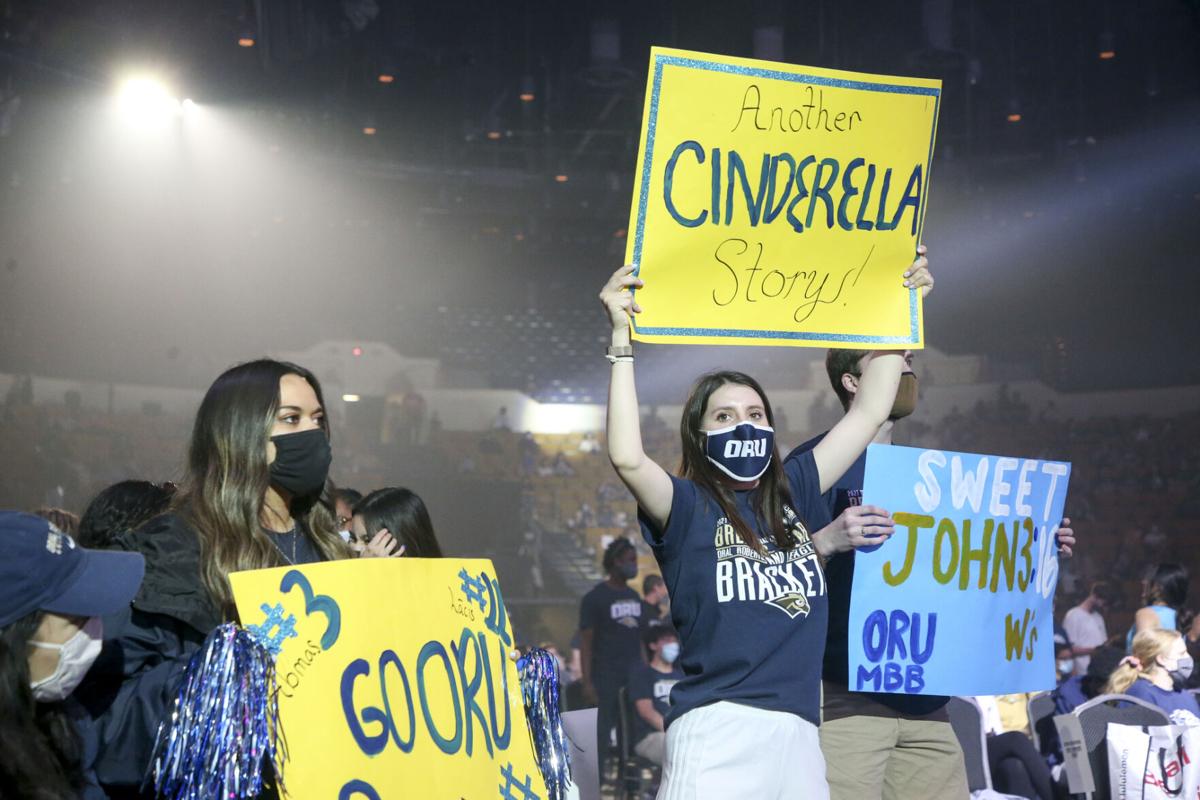 Kathryn Moder of Pittsburgh, Pennsylvania, holds up a sign while cheering during an ORU watch party at the Mabee Center on Saturday. 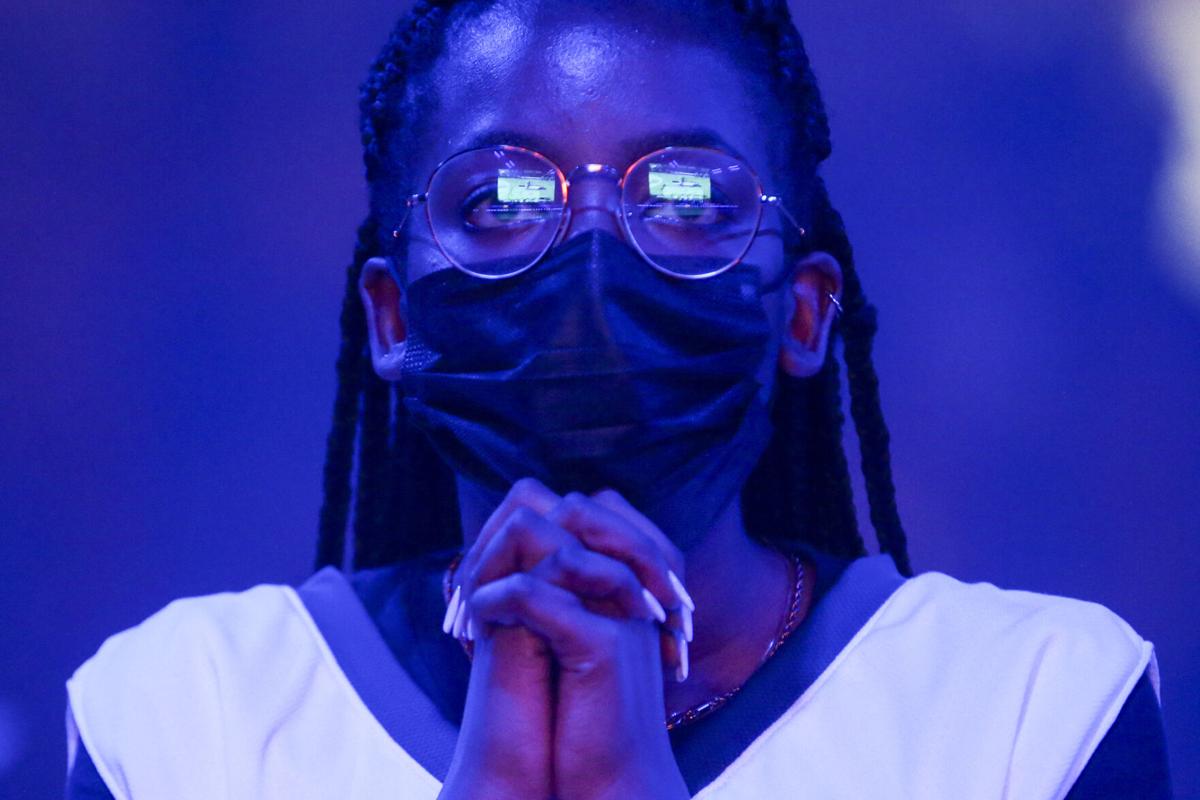 It was a very disappointing ending, but it was still a fun atmosphere Saturday night at the Mabee Center during the Oral Roberts University basketball watch party.

The Golden Eagles may have fallen to Arkansas, 72-70, in the NCAA Tournament’s Sweet Sixteen round, but the excitement and support for the team was still strong.

As the Golden Eagles attempted to become the first No. 15 seed to advance to the Elite Eight, an enthusiastic crowd of about 1,500-2,000 packed inside the Mabee Center to cheer them on.

Included among the spectators was Oklahoma Lieutenant Governor Matt Pinnell, an ORU graduate.

With students on the floor and other fans and alumni scattered around the arena watching the multiple giant TV screens at the west side of arena, there was a contagious excitement in the air.

And while the game turned out to be a heartbreaker, as the final shot from ORU’s Max Abmas at the final buzzer bounced off the rim, there was a lot of pride in the Cinderella Golden Eagles and all the attention they have received on the national stage.

“It’s been fantastic, and I think the guys did a great job,” said alum Larry Baker, who played basketball at ORU from 1969-73 and goes to all the home games. “Arkansas just took control of the game in the last five minutes with the rebounds and being physical underneath the goal. Other than that, I’m very pleased with the way ORU played and what they accomplished this year.”

“It’s definitely hard, but we’re all so proud of them for getting so far,” added ORU sophomore Victoria Cruz. “I know that when they’re back on campus, we’ll give them a welcome home cheer.”

There was a large contingent of students in attendance, covering the floor and scattered throughout the arena. It was obvious that the team’s success has galvanized the campus, even among non-basketball fans.

“I didn’t really go to a lot of basketball games before this, but everybody on campus is super hyped up about it,” ORU student Kara Glassman said. “It’s awesome, even Jimmy Fallon mentioned ORU. That’s really crazy but exciting.

“I know that the energy in here is just electrifying during these games,” added Cruz, who has been to a handful of games each season. “And with the stress of the semester, it’s just brought the campus together in a really cool way, so I just wanted to be a part of it and show my support.”

The evening started with an emcee stirring up the crowd from the stage, followed by a pre-game prayer. During all the commercials, loud music kept the fans pumped up and dancing. There was a lot of cheering, ooh-ing and ahh-ing with every play, and chants of “defense!” as if the game occurred in the building with them.

With Oral Roberts leading 35-28 at halftime, there was a performance by the ORU cheerleaders on the big stage in front of the TVs. The emcee also gave out prizes, such as free headphones and a $50 gift card to Napa Flats, among others, based on raffle ticket drawings.

For Rosel Ward, an alum from the class of 1998, watching the game among other Golden Eagles fans was a more enjoyable experience than staying at home on her couch.

“It’s just great to see that this basketball game has brought a sense of camaraderie and everybody’s coming together, something that hasn’t happened in a long time,” said Ward, who had several family members with her. “I think it’s really just a sense of togetherness. I prefer it here to watching it at home.”

The tension in the building was palpable during the final timeout with ORU trailing 72-70 with 3.1 seconds left, and then the disappointment when Abmas missed the final shot silenced the crowd.

“It hurts, it hurts,” admitted Victor Cruz, Victoria’s father and an ORU alum himself. “The offensive rebounds killed us, but so proud of our team, our school. This was incredible, just to be with the different generations — students, alumni, staff, faculty. It’s wonderful to see the Mabee Center packed again; it brings amazing memories.”

Seeing Tulsans also support the team as much as they have over the past week has been gratifying to many fans. There’s a sense of optimism that this tournament run will inspire more people to come out to games next season, with much of the team returning, including stars Abmas and Kevin Obanor.

Photos: Fans gather to watch ORU take on Arkansas in the Sweet Sixteen Matchup of the NCAA basketball tournament

Photos: Fans gather to watch ORU take on Arkansas in the Sweet Sixteen Matchup of the NCAA basketball tournament

Fans cheer at a watch party in Tulsa for ORU in the Sweet Sixteen. ORU lost 72-70.

MaryJane Murphy of Overland Park, Kansas, cheers after a made basket during an ORU watch party at the Mabee Center for their Sweet Sixteen game against Arkansas.

Becca Coelho of Katy, Texas, and Alexia Wetter of Springfield, Illinois, react during an ORU watch party on Saturday.

Evan Flotron of St. Louis, Missouri, reacts after ORU misses a a last-second shot during a watch party at the Mabee Center. Arkansas won the game 72-70.

Kathryn Moder of Pittsburgh, Pennsylvania, holds up a sign while cheering during an ORU watch party at the Mabee Center on Saturday.