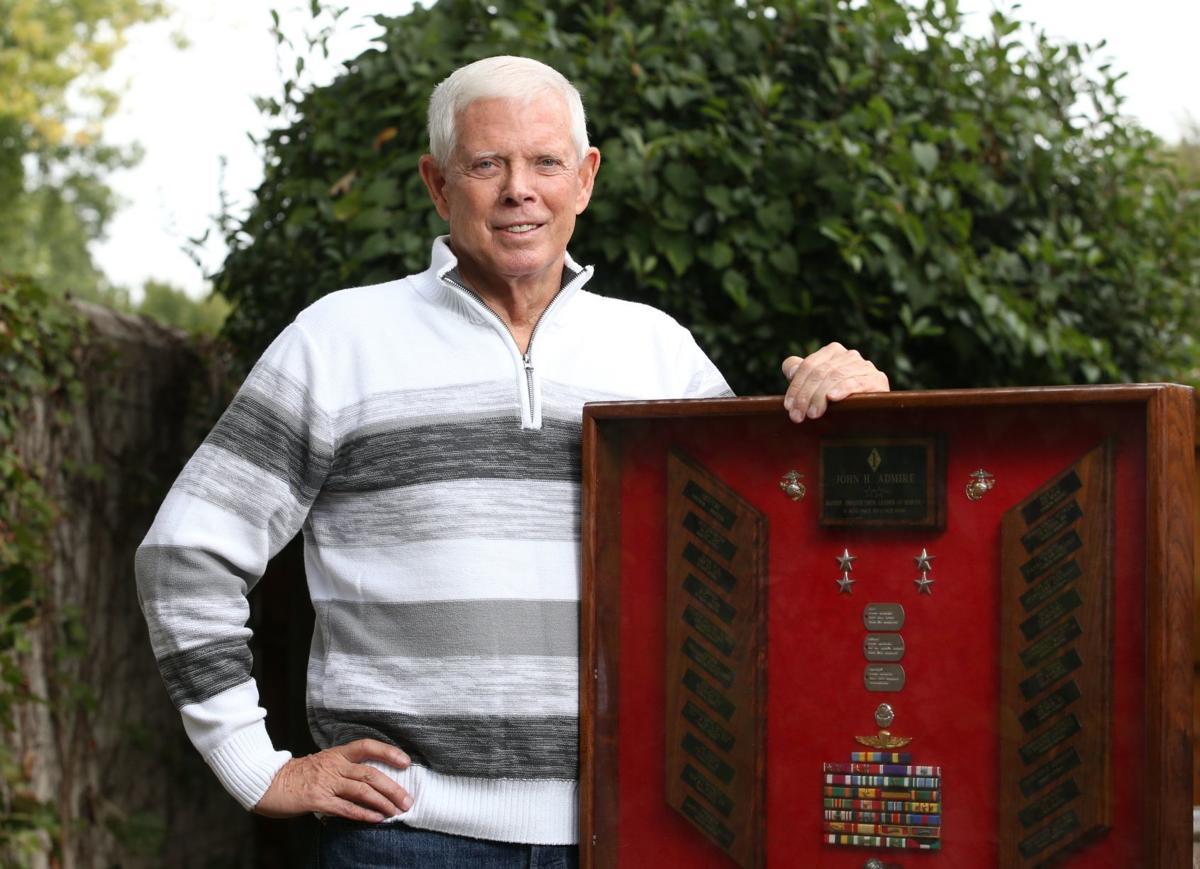 Retired Marine John Admire stands with a box of military decorations at his home in Tulsa. MATT BARNARD/Tulsa World 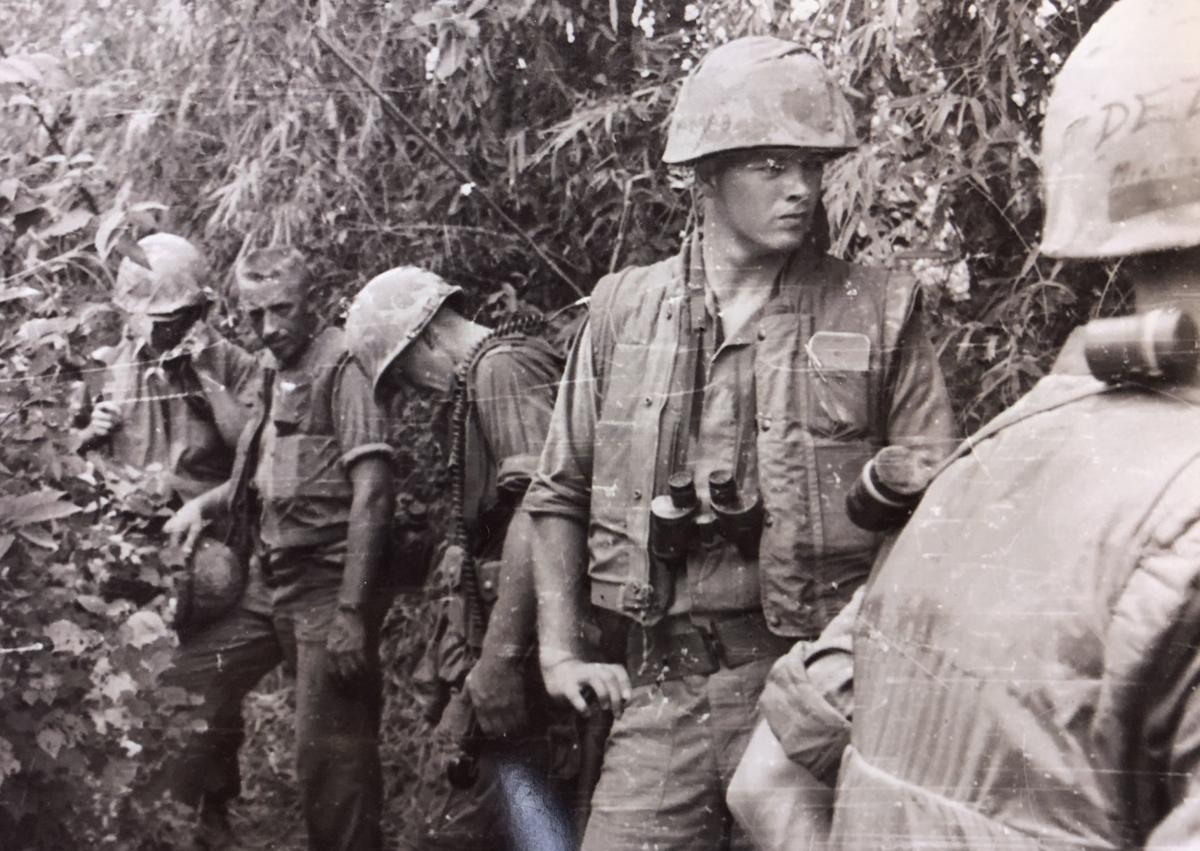 John Admire (second from right) served in the Marine Corps during Vietnam. 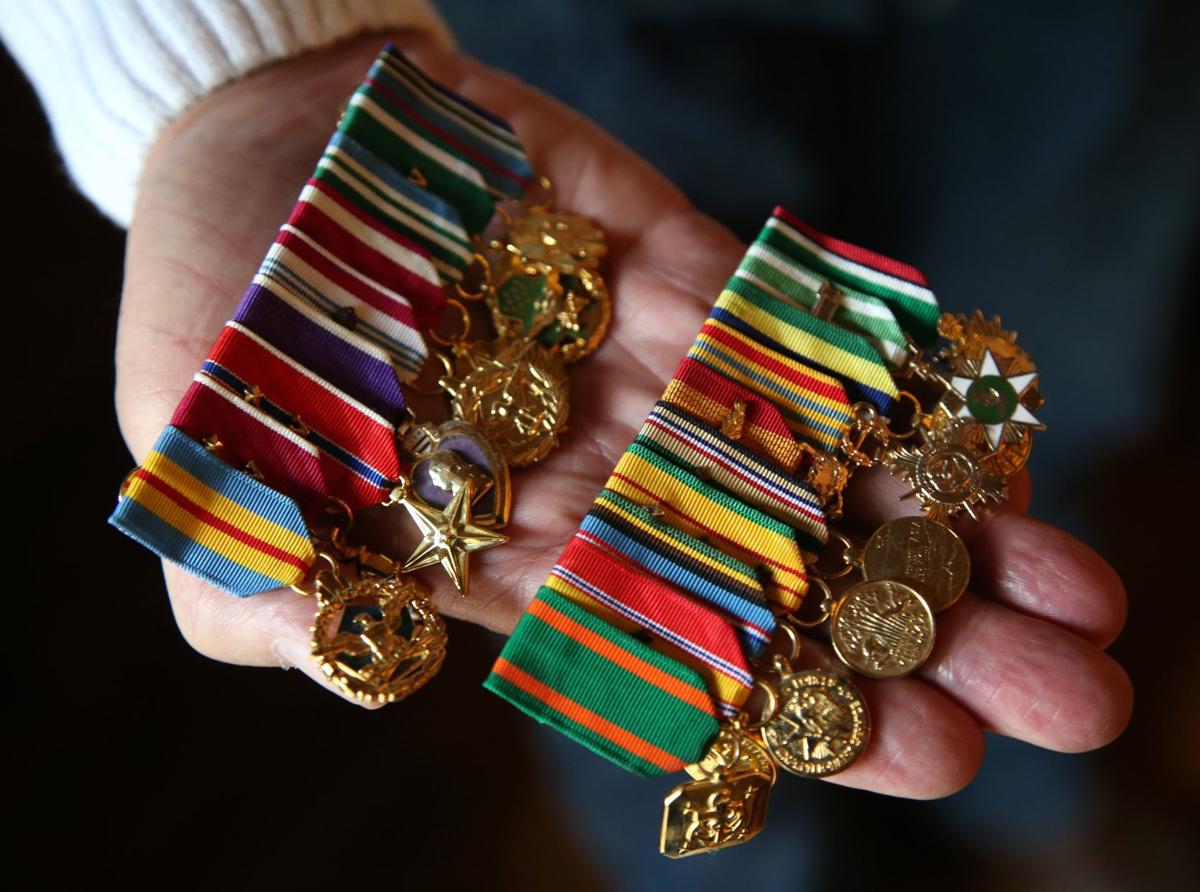 Retired Marine John Admire holds his military decorations at his home in Tulsa. 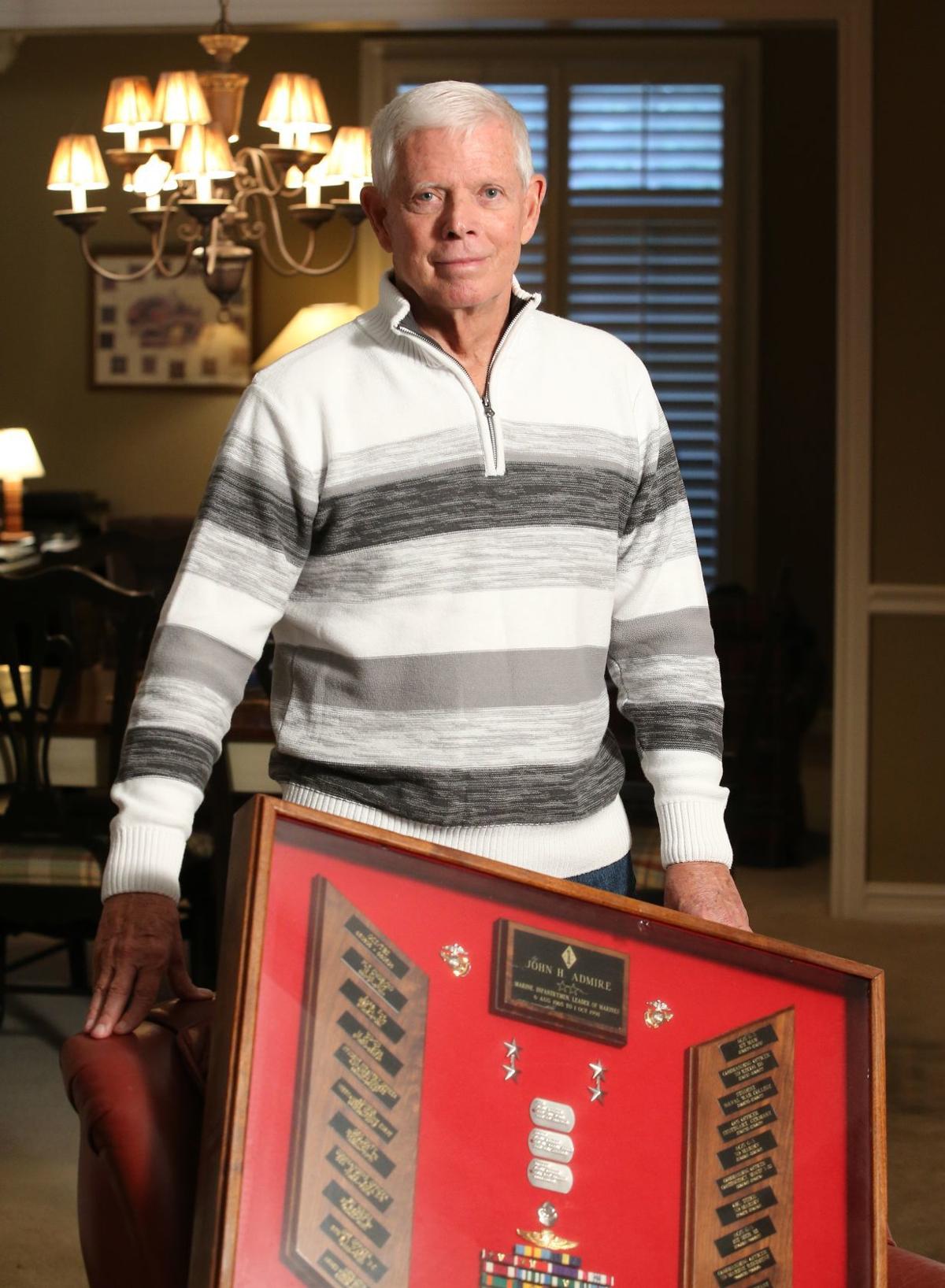 Retired Marine Maj. Gen. John Admire stands with a box of military decorations at his home in Tulsa in 2018. MATT BARNARD/Tulsa World 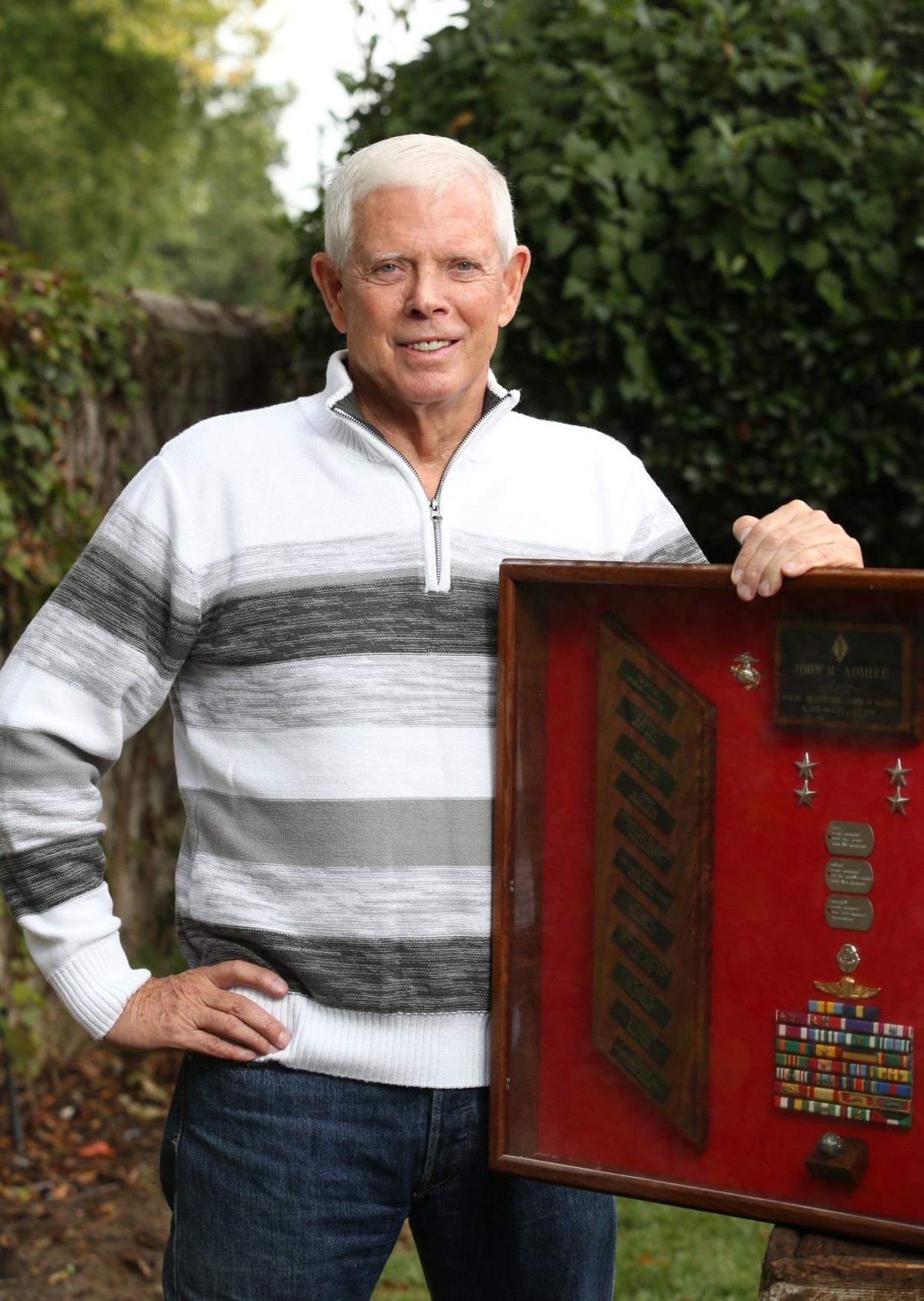 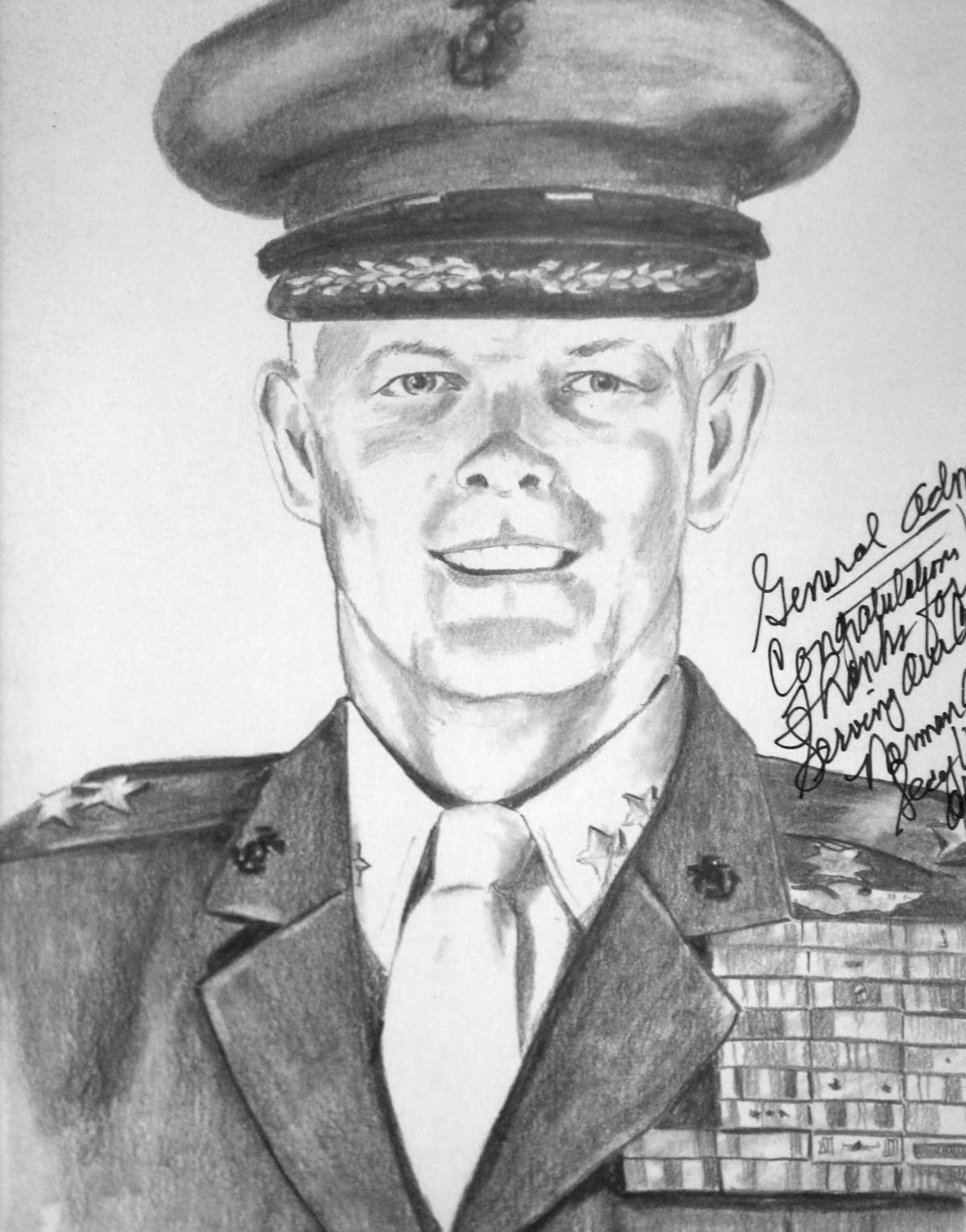 Retired Marine John Admire is depicted in a sketch at his home in Tulsa, Okla., on Friday, October 12, 2018. MATT BARNARD/Tulsa World

When John Admire first announced his plan to become a “draft dodger,” his father reacted pretty much like any other old-school World War II veteran would have.

“He kind of frowned and said, ‘What the hell do you mean, son?’”

Admire, who was home from graduate school, quickly explained that he was using the expression jokingly: His plan to “dodge” the draft was to volunteer first.

“Then I told him I was thinking of joining the Marines,” Admire recalled. “And he said, ‘Well, that’s kind of an insane way to beat the draft.’”

Admire’s father didn’t want his son to be a draft dodger — but at the same time, he wasn’t ready to see him go to Vietnam.

“No parent wants to see their child go off to war,” said Admire, who at the time was at the University of Oklahoma.

A retired Marine Corps major general and member of the Oklahoma Military Hall of Fame, Admire talked to the Tulsa World recently about his 43 years in service, which grew from its start as a combat infantry Marine in Vietnam to include roles at the highest levels — in the Carter White House, on Capitol Hill and as part of Gen. Colin Powell’s Pentagon Joint Staff. He would finish his career as commanding general of the First Marine Division.

Admire, who grew up in west Tulsa, initially had no plans to join the military, much less make a career of it.

Upon graduating from Webster High School in 1960, he was thinking of becoming a sportswriter and got a journalism degree from OU.

But knowing that he would probably be drafted sooner or later, he went ahead and joined the Marines.

Of course, this plan would require that he survive. It didn’t take him long to learn just how hard that could be.

A platoon commander, Admire had barely arrived in Vietnam before he’d lost one of his men to a booby trap.

It happened on his first combat patrol, he said: “I was up ahead when I heard him holler, ‘Danger!’ A young corporal — Daniel Post. I’ll never forget his name.”

Post had stepped on a trip wire. It was a delayed explosion, but he didn’t move fast enough.

“I turned and saw it happen,” Admire said. “It was the first death I saw.”

The first of many, he added. “It was rare to go two weeks over there without losing someone from your unit.”

Fighting for each other

In combat, Admire preferred firefights — “when your adrenaline kicks in, and you can react and do something” — to mortar or rocket attacks, in which you were largely helpless.

“Your ears became trained, and you knew when you heard (mortars being fired), even in battle.”

The sound meant you had 28 seconds before they hit, he said. “All you could do was get down as low as you could and wait. And pray.”

Admire says he actually minded the combat in Vietnam less than the conditions.

“I don’t think in the last 50 years that when it rains it hasn’t reminded me of over there — the monsoons, the miserable conditions. We were always soaked.”

Once, during a lull in fighting, some news from the outside world crackled over Admire’s transistor radio: Astronaut Neil Armstrong had just become the first person to set foot on the moon.

As he lay there in the mud cradling a gun, Admire was struck by the sad irony — that people could achieve something so glorious, and yet, here they were, still killing each other in war.

He met Armstrong years later and told him the story.

Admire didn’t stick to his original plan after his first tour concluded. He volunteered for another. And another after that.

By the time of his second, he said, the Marines were aware that public support for the war was deteriorating. But neither that fact nor the growing frustration of fighting a war limited by politics and other concerns could stop them from fighting for each other.

Anything less, he added, would have dishonored the men “who had sacrificed their lives.”

After completing his third tour, Admire decided that the Marine Corps was his future.

His climb would eventually lead him to Washington, where, among various assignments, he served as the Marines’ legislative liaison to Congress and senior military social aide at the White House.

In the latter role, Admire got to attend a state dinner for Pope John Paul II and be on hand for history, such as when Egypt and Israel signed the Camp David Accords on the White House lawn.

His later service on Powell’s Joint Staff was also a point of pride. Powell, he said, “was one of the most phenomenal leaders I’ve ever met. Truly a unique and honorable person.”

Admire retired in 1998. He moved back to Tulsa a few years ago.

He still speaks frequently and even wrote a book inspired by his experiences in Vietnam, “Darker than Dark.”

Although he once wanted to be a sportswriter, Admire has no second thoughts about the choice he made.

“Veterans Day reminds me of how much of a privilege it is to live in this country and what an honor it was to serve it.”

Michael Overall: Claremore embraces a cutting-edge plan to ‘save the suburbs’ — Should other Tulsa communities do the same?

Local officials want to encourage new developments in historic parts of town 'without disturbing what is already there or spoiling what has made those areas so special in the first place.'

Retired Marine John Admire stands with a box of military decorations at his home in Tulsa. MATT BARNARD/Tulsa World

John Admire (second from right) served in the Marine Corps during Vietnam.

Retired Marine John Admire holds his military decorations at his home in Tulsa.

Retired Marine Maj. Gen. John Admire stands with a box of military decorations at his home in Tulsa in 2018. MATT BARNARD/Tulsa World

Retired Marine John Admire is depicted in a sketch at his home in Tulsa, Okla., on Friday, October 12, 2018. MATT BARNARD/Tulsa World