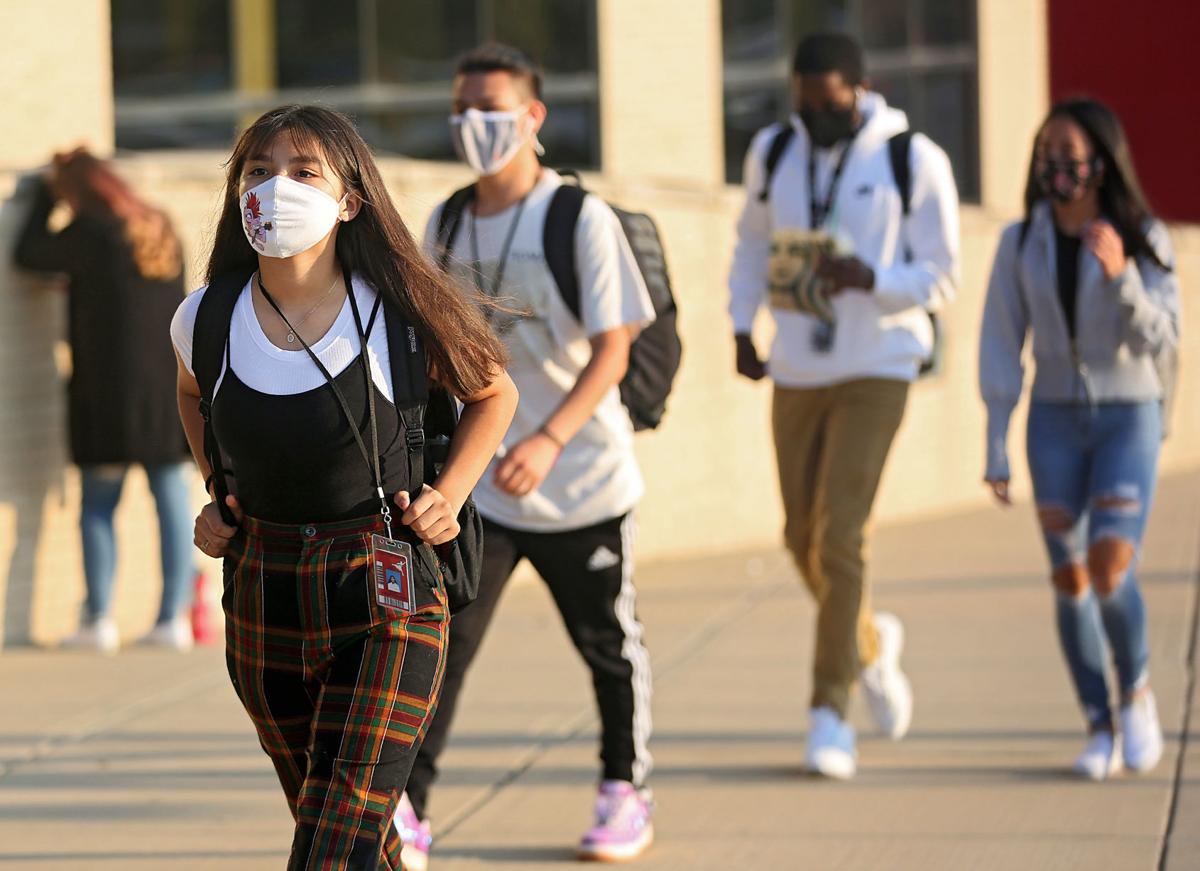 Sophomore Jacqueline Zavala and others arrive for the first day of school at Union High School on Monday. MIKE SIMONS/Tulsa World 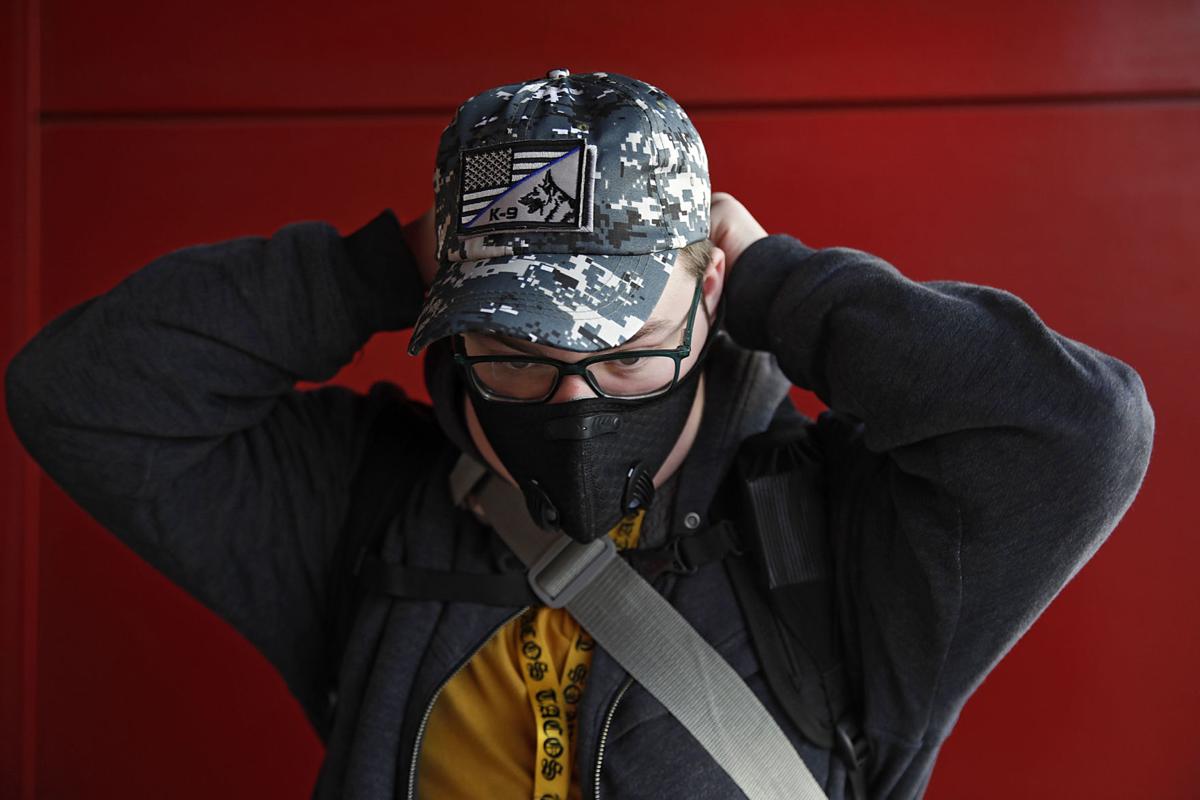 Sophomore Connor Roscher puts on his mask as he arrives for the first day of school at Union High School on Monday. MIKE SIMONS/Tulsa World 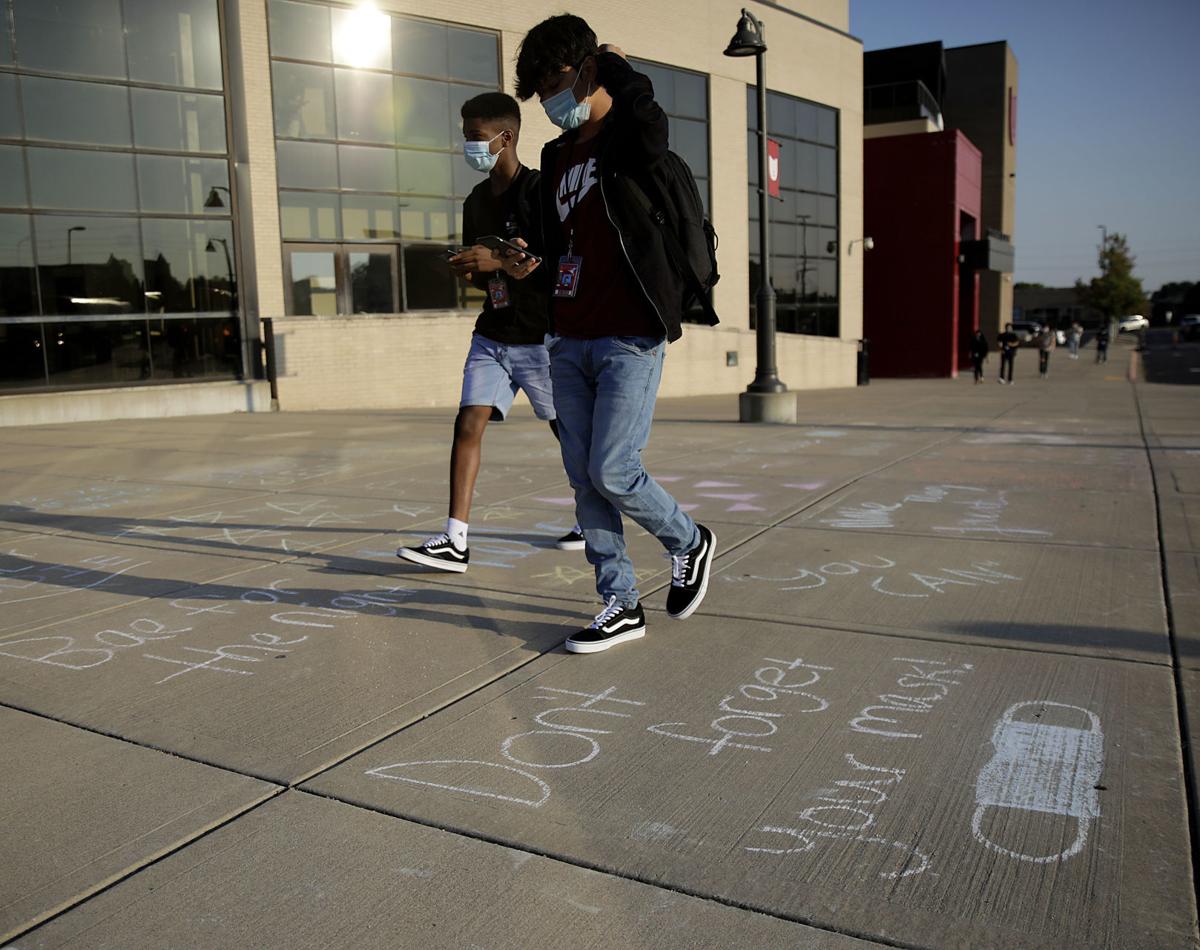 Students are reminded to wear a mask amid other more traditional first day of school chalk drawings on the sidewalk as they arrive at Union High School on Monday. MIKE SIMONS/Tulsa World 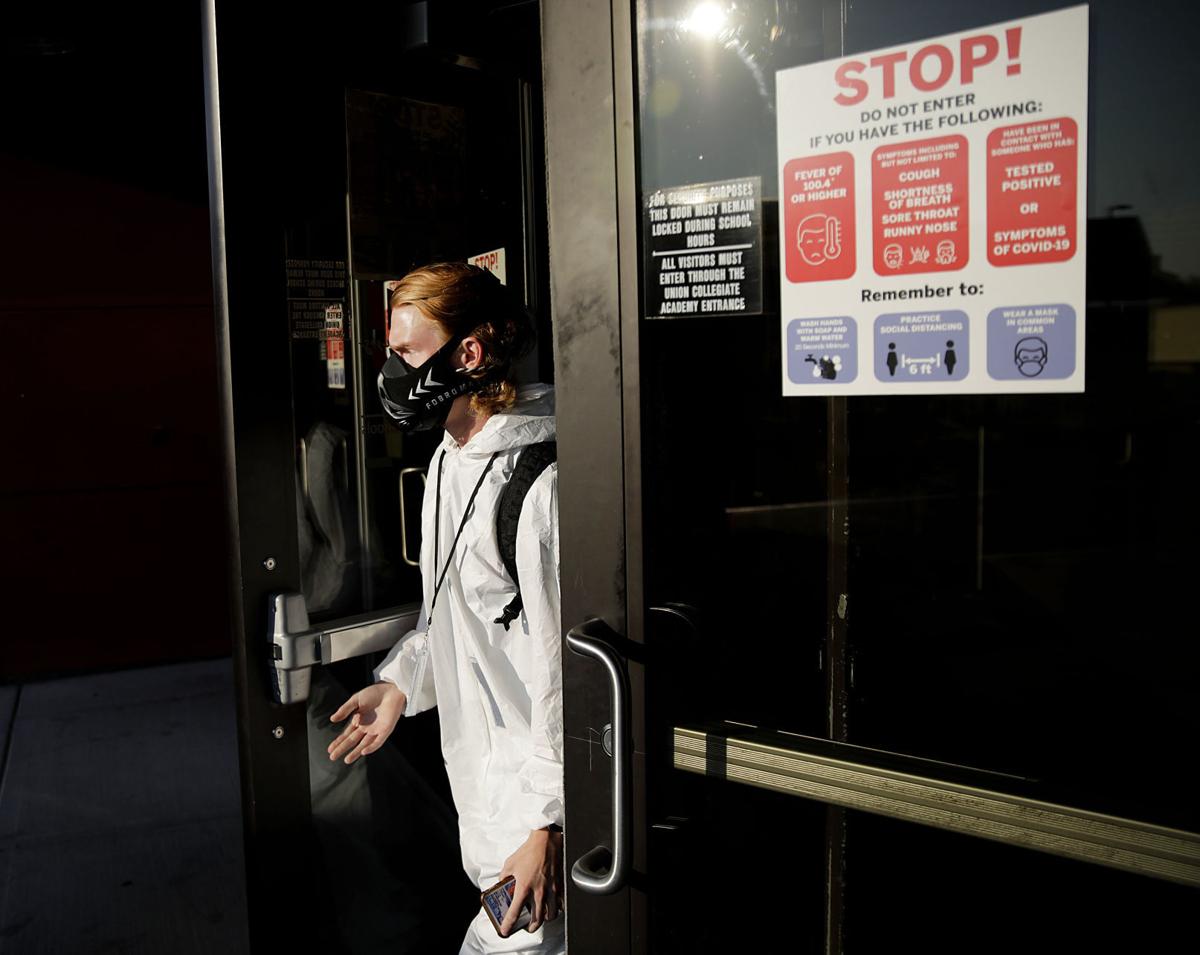 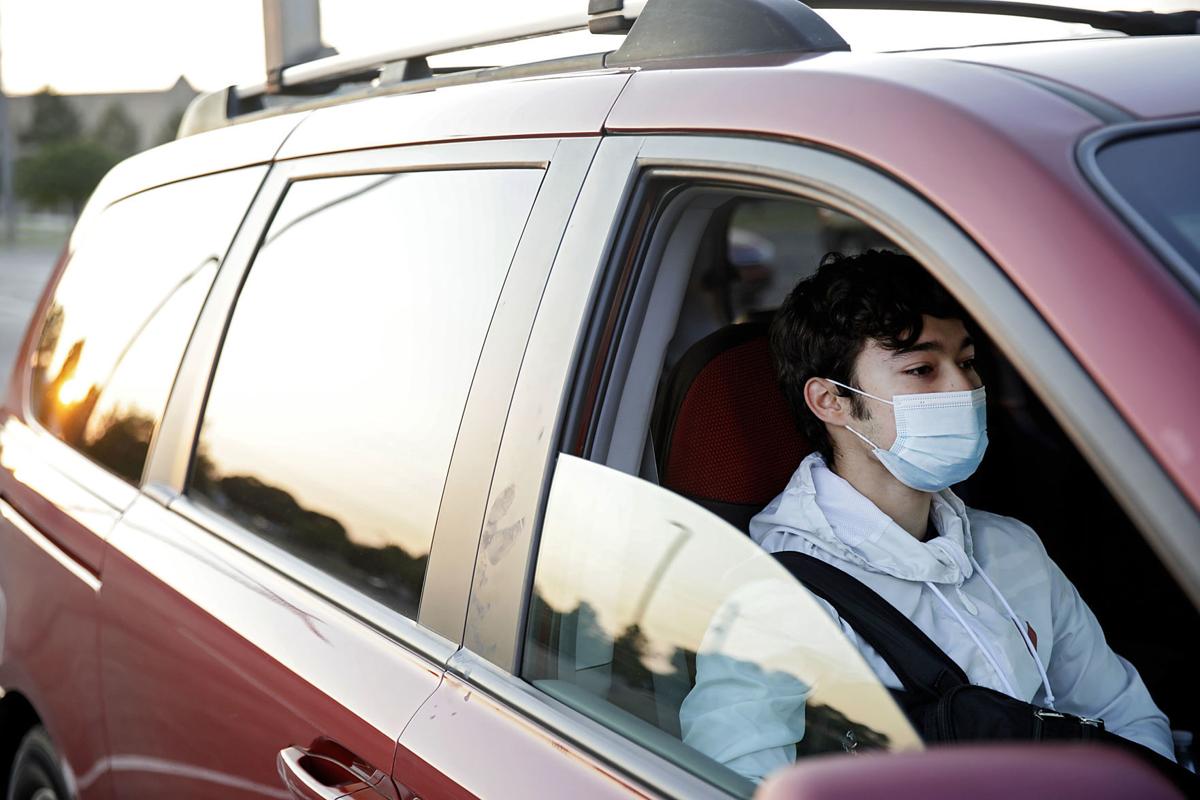 Sophomore Chris Johnson waits in his car for the building to open on the first day of school at Union High School Monday, Aug. 24, 2020. MIKE SIMONS/Tulsa World 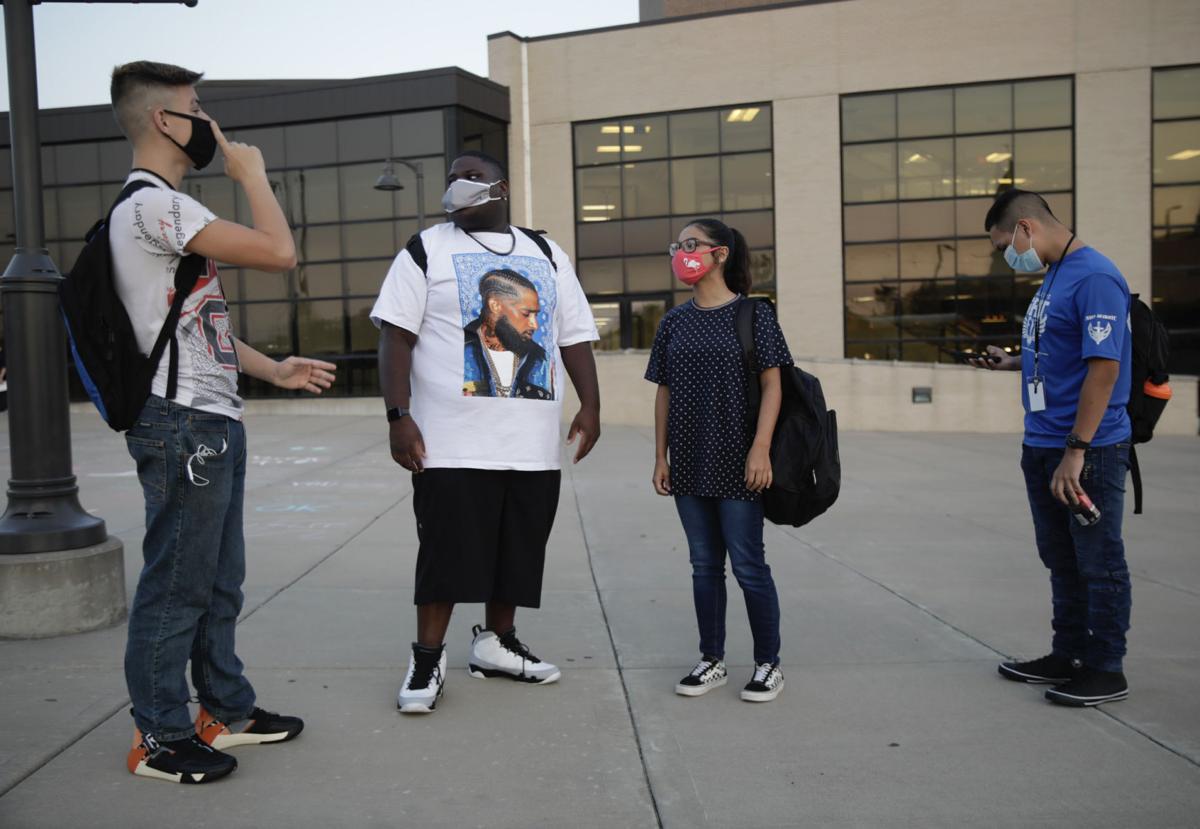 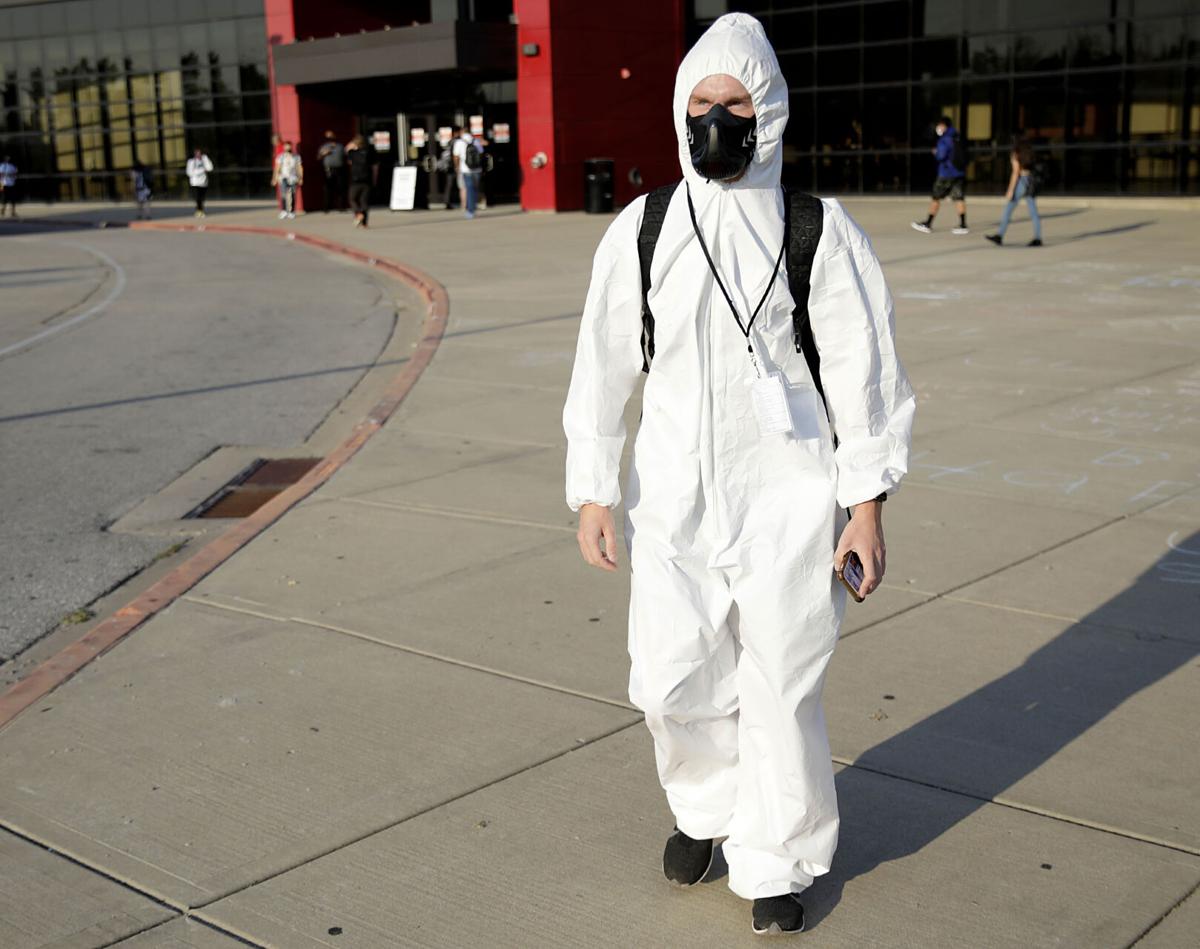 The first thing Zoe Wolf did after arriving for the first day of class at Union High School on Monday morning was put on a mask. The second thing she did was take a selfie.

Wolf, a junior, felt a mixture of excitement and anxiety about returning to school for the first time since mid-March, when districts across Oklahoma transitioned to distance learning in response to the COVID-19 pandemic.

“I’m kind of scared by it because I’m not sure how easy it will be to get everyone to keep their masks on, but I’m grateful because I didn’t learn very well during virtual and I definitely need to be back in the building to learn,” she said. “I’m hopeful that it’s going to work out really well because I really want it to.”

Several thousand Union students began their first day of school in person Monday after the school board rejected Superintendent Kirt Hartzler’s recommendation to implement distance learning. About 5,350 students signed up for the district’s virtual academy, which equates to 35% of the total student population.

Before the board vote earlier this month, Union administrators said they did not think school would last a week if the decision was made to allow in-person instruction. Cases already have appeared in districts throughout Oklahoma, and some already have made the call to abandon face-to-face learning.

On Monday, Union Public Schools confirmed that four employees have tested positive for COVID-19 and will be quarantined. They were among about 1,100 staff members who volunteered to receive an antibody test last week.

Antibodies were detected within 11 employees, including teachers, who were sent to receive the standard nasal swab test. The results of eight employees came back Monday, showing four who tested positive for the disease.

Looking ahead, Hartzler said he doesn’t know what’s going to happen in these next few days and weeks. His current mindset is to keep pressing on and take things one day at a time. The district will make the jump to distance learning if it becomes necessary.

The superintendent visited several schools throughout the day and plans to make an appearance at every site by the end of the week. From what he’s seen so far, students are happy and apprehensive about being back at school.

There’s plenty of confusion among younger kids who have trouble processing the situation and don’t know why they’re not allowed to hug their teachers or be close to their classmates.

Older students largely seem glad to be back in school, even if it’s in a more restricted capacity.

“I’ll say this,” Hartzler said. “I certainly understand why parents would want their students to be back in the classroom in a stimulating and nurturing environment while also trying to reconnect with some sense of normalcy. But that normalcy that we were used to pre-COVID is going to be different, and we’ll just have to learn to continue to adapt to it.”

Union High School senior Kaitlyn McClary said it feels weird to be back in school during a pandemic but appreciated that the district made wearing masks mandatory.

The atmosphere is nothing like what it was last spring — and not just because of the masks. Protocols for walking from class to class have changed dramatically to reinforce social distancing. Some halls, for instance, are now one way only.

Although McClary said it’s too soon to say whether she feels safe at school, she appreciates not having to take part in distance learning for now.

“It didn’t work for me,” she said about remote instruction. “I couldn’t get the learning experience that I needed. I’m going to enjoy being back in school and being able to talk to my teachers face to face.”

Her boyfriend, senior Mason McCoy, said he was shocked the district returned in person and that he doesn’t think it’ll take long for Union to switch back to distance learning.

Meanwhile, Sapulpa and Sand Springs also started in-person instruction Monday. Jenks and Owasso had their first days as well, though both districts have opted for distance learning.

COVID-19 basics everyone needs to know as the pandemic continues.

Sophomore Jacqueline Zavala and others arrive for the first day of school at Union High School on Monday. MIKE SIMONS/Tulsa World

Sophomore Connor Roscher puts on his mask as he arrives for the first day of school at Union High School on Monday. MIKE SIMONS/Tulsa World

Students are reminded to wear a mask amid other more traditional first day of school chalk drawings on the sidewalk as they arrive at Union High School on Monday. MIKE SIMONS/Tulsa World

Sophomore Chris Johnson waits in his car for the building to open on the first day of school at Union High School Monday, Aug. 24, 2020. MIKE SIMONS/Tulsa World