PGA Championship, Round 2: Follow our coverage from Southern Hills 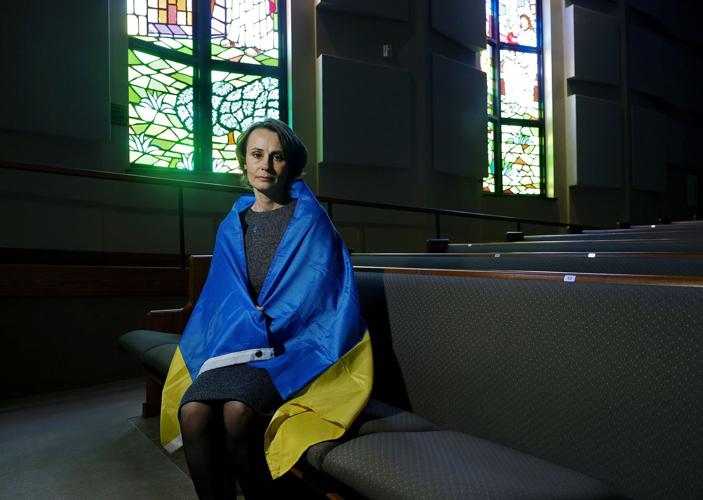 Yana Sherdis, a member of South Tulsa Baptist Church, is one of many former Ukrainian refugees who have settled in Tulsa over the last decade. 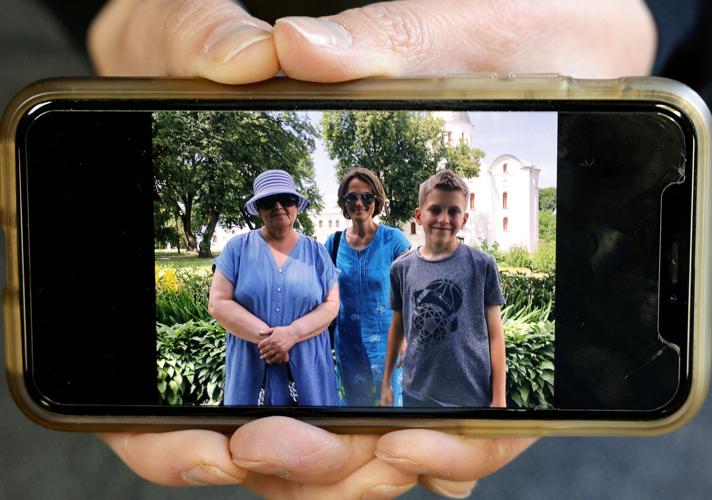 Yana Sherdis holds a photo on her phone of her with her mother, Vera Volosiuk, and son Ted during a visit last year to Ukraine, where she was able to show her children the church her father built in Mariupol. 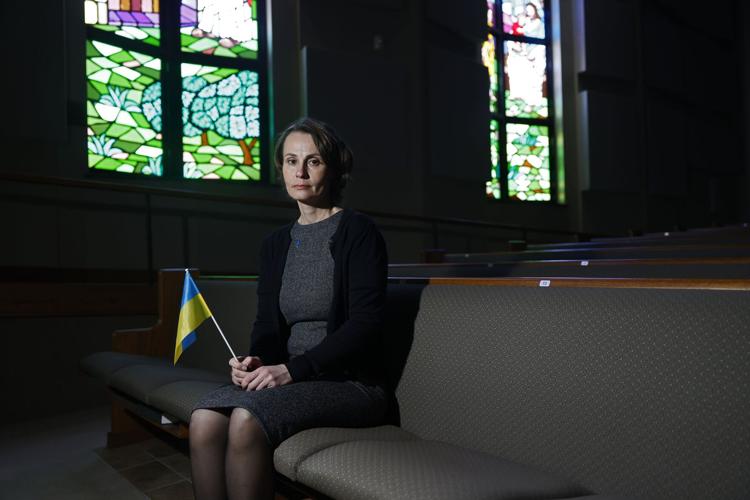 By the time the last shell had fallen, most of the neighborhood buildings had been turned into rubble.

But not all of them.

Somehow, despite all the destruction raining down, the church that Yana Sherdis’ father built was still standing.

And the sight of its steeple cross silhouetted against the morning sky provided some much-needed encouragement.

“When I saw the photos from Mariupol of the church, I was so happy for the people there,” said Sherdis, one of many former Ukrainian refugees who’ve settled in Tulsa over the last decade.

Since Russia’s invasion of Ukraine began Feb. 24, most images pouring out of the conflict have been heart-rending.

A few, though, like the one of the church, have inspired hope.

Built in 1990 by Sherdis’ late father, the church’s former pastor, the structure withstood the heavy Russian bombardment of its section of the eastern port city of Mariupol.

Members also sent out video of a service held in the church basement. They wanted the outside world to know that they are standing firm.

For Sherdis, who has felt so powerless following the war from a distance, it was encouraging to see.

Still, the overall picture of what’s going on — the bloodshed and mounting casualties — is devastating, she said.

Sherdis, who was born in Russia, moved to Mariupol as a child. It’s been hard to watch the horrors unfold from afar.

“Not in my worst nightmare could I have imagined this happening,” she said.

‘Refugee is not a bad word’

Completing a journey that began after she arrived in 2016, she officially took the oath to become a U.S. citizen.

But the naturalization ceremony, held Wednesday in Tulsa, was not as joyful for her as it should have been.

Overshadowing everything was the news out of Mariupol, where the Russian siege continued to exact a staggering toll.

Sherdis still has many family and friends in the city. On top of the Russian shelling, they are experiencing loss of electricity, heat, water and other basic necessities.

Sherdis said she and her husband, Nikolay, have not heard a word from his parents in Mariupol in two weeks.

“Their neighbor did tell us last week they were OK,” she said. “He had to climb a tree to get cell reception. But he was able to call.”

Sherdis’ mother and brother are in the capital, Kyiv.

Communication is better there, and she talks to her mother every day.

But with Russian forces closing in on that city, she worries for their safety.

One thing that’s helped Sherdis emotionally during the crisis is the presence of fellow Ukrainians in Tulsa.

“I never knew there were so many before this,” she said.

Along with her husband and their two boys, Ted and Peter, Sherdis attends South Tulsa Baptist Church, which has made serving refugees and immigrants one of its main missions.

In addition to a few Ukrainians who are members, others come there to attend English language classes.

How many more Ukrainians might eventually come to Tulsa is hard to predict.

So far, it’s estimated that over 2 million people have left Ukraine since Russia invaded, seeking refuge in neighboring countries.

But however it works out, Sherdis and her fellow church members will be ready to step up.

“Refugee is not a bad word here,” said the Rev. Eric Costanzo, South Tulsa Baptist Church pastor. “People here just immediately hear that now and say, ‘What’s our next step?’ They know it’s a frontline ministry for us.”

The idea that another huge refugee crisis might follow on the heels of the Afghans never crossed anyone’s mind, Costanzo said.

“Right now, it’s just chatter. Nothing from official channels. But with so many refugees pushed out, it’s hard to imagine a significant population not coming into the U.S. We’re all waiting to see,” he said.

And with many Ukrainians already in Tulsa, Costanzo added, it would make even more sense for others to move here after arriving in the U.S.

The plight of Ukraine’s children is also a special concern for Sherdis.

Before his death, her father started a ministry called Open Doors that supports the nation’s orphans and helps facilitate adoptions.

Sherdis previously served as director of the organization, which is supported by her church.

“There are already so many orphans in Ukraine for economical reasons and because of previous (conflicts),” she said. “But now, with this, the numbers are huge, and they’re growing.”

Though she and her family were classified as refugees, Sherdis doesn’t like to compare their situation to the present group’s.

“It was so much different for us,” she said of when they left Ukraine six years ago.

At the time, her family was fleeing the possibility of religious persecution, not actual death and destruction, she said. And also, she added, they just wanted better opportunities for their children.

What’s created the current refugee situation is so much worse, she said.

One of the saddest aspects of the war, Sherdis added, is that it pits “brother against brother.”

“We look the same. We speak the same language. We have the same faith.”

But Ukraine has no choice but to defend itself, she said. “It is a war for freedom. People are fighting for their land, for their freedom.”

Since leaving Ukraine, Sherdis has been back only once.

It was last summer, and the trip offered her a chance to visit family members she hadn’t seen in years.

She also took the opportunity to show her children her father’s church in Mariupol.

“It was such a challenge for him to get it built,” she said.

“Also, some complained that the basement was too big. But my father knew God had a plan.”

She saw that plan come to fruition in the cellphone video that recently emerged. It showed a worship service being held in the church basement, a safer location during the siege.

Sherdis said she can’t help but feel some survivor’s guilt that she’s safe in the U.S. and not facing what her friends and family are in Ukraine.

But she has to trust that, again, God has a plan, she said.

And whatever it is, she’s sure that being in Tulsa — and her new status as an American citizen — are part of it.

“I feel if God brings me here, if I’m a citizen now, then it’s because he wants it,” Sherdis said. “He knew why he brought me here. Maybe he will use me here.”

Photos: Rally for Ukraine in downtown Tulsa on Sunday, Feb. 27

While the new owner is fumbling with his keys to unlock the front door, a minivan pulls up to the curb and four or five people climb out, cell phones in hand, ready to start taking pictures.

On equal footing with the absence of defending champion Phil Mickelson and the looming threat of the LIV Golf Series, another controversial subject has dominated the conversation this week at Southern Hills: the cost of alcohol.

'How did these people not know?': Broken Arrow senior denied right to wear feather at graduation

An Osage and Otoe-Missouria Broken Arrow senior and her mother are speaking out after a graduation night confrontation with school district employees over an eagle feather. #oklaed

Four decades after he was acquitted, the latest DNA testing in the case, although officially inconclusive, strongly suggests Gene Leroy Hart's involvement, officials say, while eliminating several other potential suspects.

The federal government either directly operated or provided support for 408 Indian boarding schools nationwide, including 76 in Oklahoma, to strip the youths of their culture, language and traditions, according to a report released Wednesday by the Department of the Interior.

The Mayor's Office and Police Department have proposed changing a city ordinance to make it easier for police to remove people obstructing sidewalks and other public rights of way.

Baby formula shortage: One woman's quest to secure food for her infants

After Allie Hodges’ twin girls were born premature in early March, the hospital sent them home with about a week's supply of baby formula made especially for preemies.

A collision involving a car and two motorcycles on a Tulsa highway Sunday night left a 30-year-old woman dead and injured two other people, including a child.

The increase of 40% this year, found in a January count, reflects a nationwide trend of homeless encampments spreading across major cities.

Gas stations and trucks damaged after severe weather in Illinois

Gas stations and trucks damaged after severe weather in Illinois

Yana Sherdis, a member of South Tulsa Baptist Church, is one of many former Ukrainian refugees who have settled in Tulsa over the last decade. 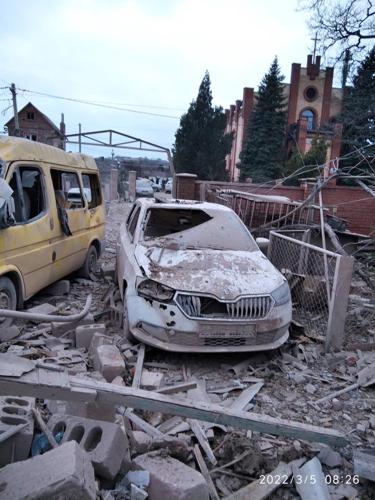 A church in Mariupol, Ukraine, (upper right) built by Yana Sherdis’ father is still standing despite Russian shelling that leveled most of the surrounding neighborhood.

Yana Sherdis holds a photo on her phone of her with her mother, Vera Volosiuk, and son Ted during a visit last year to Ukraine, where she was able to show her children the church her father built in Mariupol. 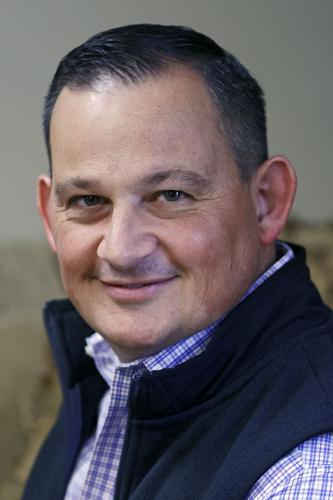