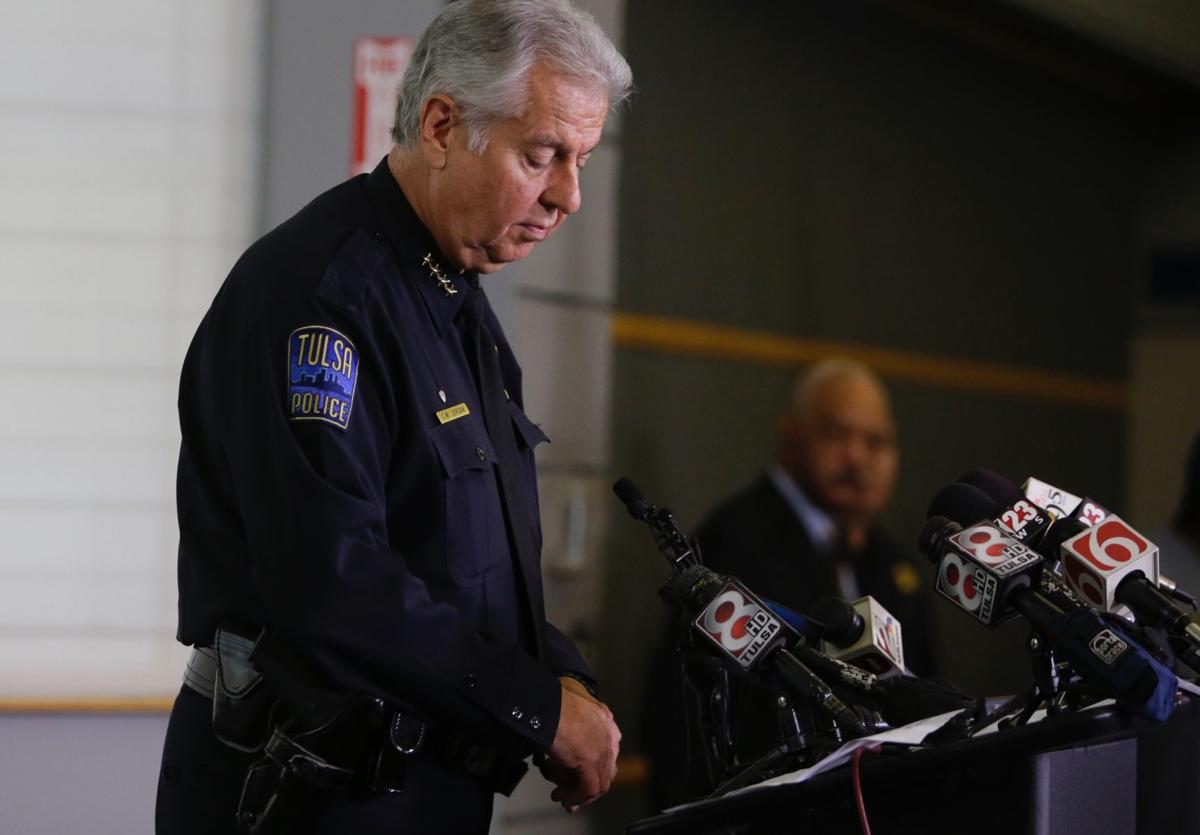 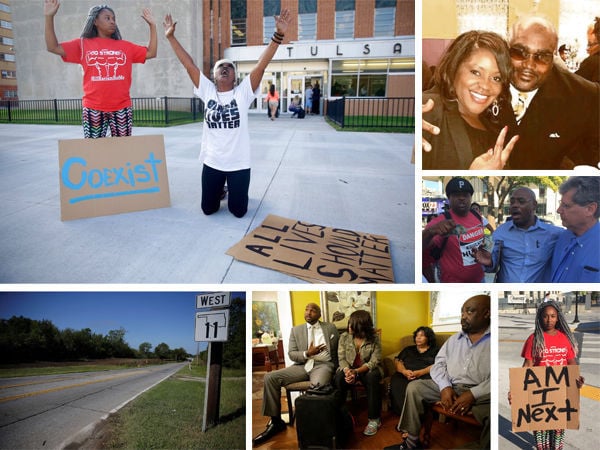 Update: Tulsa police have released footage of the fatal shooting of Terence Crutcher following a Monday afternoon news conference. Watch footage from the ground here and footage from a police helicopter here.

The U.S. Department of Justice has opened an investigation into whether a civil rights violation occurred during the fatal police shooting of an unarmed man on Friday night.

During a Monday afternoon news conference about the death of 40-year-old Terence Crutcher, Tulsa Police Chief Chuck Jordan said officers found no gun on Crutcher or in his SUV, which was stopped in the middle of 36th Street North just west of Lewis Avenue.

Officer Betty Shelby fired a single shot at close range that video footage released Monday indicates hit Crutcher in the upper right chest. Another officer, Tyler Turnbough, deployed his Taser at almost the same time Shelby — who did not have a Taser — used her service weapon.

“I want to assure our community, and I want to assure all of you and people across the nation who are going to be looking at this, we will achieve justice, period,” Jordan said.

He called the videos "very disturbing" and "very difficult to watch."

The Department of Justice inquiry is separate from the investigation being conducted by local authorities, which will determine whether criminal charges are filed in connection with the shooting.

Jordan declined to take questions or provide further details during the news conference, citing pending investigations into what led to Crutcher's death.

After Monday's news conference, Tulsa Police Sgt. Shane Tuell responded to a question regarding how this fatal shooting differs from others the department has had this year.

"There's a lot of video that you can watch that there's actually no question as to what you're seeing," he said. "This one leaves a lot of questions."

Tuell said he hopes the agency's decision to have north Tulsa leaders and family view the videos first is "the olive branch needed" so the investigative process can go more smoothly.

"We didn't want to release all this stuff and then have them wonder what we're doing about it. We want to be extremely upfront," he said. "It sounds like rhetoric, but it's honest truth."

The footage reveals discrepancies in the department's initial statements from the scene Friday night.

Police initially said Crutcher approached officers from the side of the road after Turnbough arrived. However, video footage from Turnbough's patrol car shows Crutcher walking to his vehicle with his hands raised and that Shelby had her gun pointed at his back.

After Crutcher reached the driver's side of his vehicle and turned toward the window, Shelby, Turnbough and a third officer each had either a gun or a Taser pointed at him.

The officers' position on Turnbough's dash camera video footage obscures much of the shooting, but Crutcher can be seen falling to the ground after one gunshot. Shelby then says, "Shots fired!" over the radio, telling dispatchers, "I've shot a subject who won't show me his hands."

An attorney for the Crutcher family has previously said his hands were up when he was shot.

Tuell told the World that Shelby's dash cam footage wasn't provided because she didn't activate her vehicle's lights and sirens, which meant the camera was turned off.

Audio from two 911 calls shows two people called the police to report that Crutcher's vehicle was blocking traffic on 36th Street North, with one caller reporting that the driver apparently left the vehicle running with the doors wide open. That caller also told the dispatcher that a man ran from the vehicle because he believed it might explode.

Shelby was dispatched to the call because she was en route to a nearby domestic violence report, Jordan said.

Video from a Tulsa police helicopter that was overhead briefly before the shooting shows Crutcher walking with his hands up before the shot was fired. It’s unclear from the video whether he was reaching for anything when he was shot.

"Looks like a bad dude, too," one of the two officers in the helicopter says of Crutcher before he was shot. "Could be on something."

A records search using Crutcher's license plate turned up no information regarding any criminal history, according to dispatch audio.

It's not clear from either video what Crutcher's last action was before Shelby shot him. Immediately after Crutcher was shot, one officer in the helicopter says, "I think he may have just been Tasered," before Shelby says over the radio that a shot was fired.

No one can be seen rendering aid to Crutcher until more than 2½ minutes after he was shot, which Tuell said after the news conference is also under investigation. Turnbough's dash cam video shows an officer apparently searching Crutcher's pockets and waistband for weapons or other contraband before starting first aid.

Attorney Scott Wood, who is representing Shelby, told the Tulsa World that the situation unfolded for nearly 2 minutes before the  video footage began. Prior to the deadly encounter, Wood said no one was around when Shelby pulled up. The SUV was straddling the center line with its engine running and doors open, "so she isn't really sure what's going on," Wood said.

He said Crutcher repeatedly ignored Shelby's commands and didn't respond to her questions. Crutcher, he said, reached toward or into his pockets several times despite Shelby's telling him not to do so.

Wood said Shelby, who has completed drug recognition expert training, believed that Crutcher was acting like a person who might be under the influence of PCP.

Shelby was concerned that Crutcher kept reaching toward his pockets, Wood said, because someone carrying a weapon will often touch it to make sure it's still there. She drew her handgun after Crutcher walked toward the passenger side of the police car and started to put his hand in his left pocket, Wood said. She then radioed dispatch to report that she was with a person who wasn't complying with her demands, he said.

"He never makes any response to her," Wood said.

Wood said Shelby cleared — or checked — the SUV from the driver's side and was about to clear the passenger side when Crutcher approached from the east. The backup officer arrived and drew his Taser, Wood said. The Taser deployment and gunshot were simultaneous because both officers perceived the same threat, he said.

"He has his hands up and is facing the car and looks at Shelby, and his left hand goes through the car window, and that's when she fired her shot," Wood said.

Crutcher "had his head tilted down but eyes on and fixated on her," Wood said, adding that she said Crutcher mumbled incoherently when she asked him if the SUV belonged to him.

Shelby, who joined the Tulsa Police Department in December 2011, is on paid administrative leave. She gave her statement on the incident to homicide detectives Monday morning.

Turnbough's use of force will be the subject of a Tulsa Police Department Internal Affairs evaluation regarding whether he followed policy. Tuell said the Internal Affairs investigation into Shelby's actions will begin after the District Attorney's Office decides whether to file charges against her.

District Attorney Steve Kunzweiler said during the news conference that Crutcher's death is a "tragic event," but he emphasized the importance of letting investigations proceed as necessary.

"We are a country of laws, and the rule of law needs to be adhered to," he said. "Many people may want to have an outcome within a hair's breadth, but it's my responsibility to make sure that the facts fit the law, and I will do that."

City Councilor Jack Henderson said during the conference that he has a "hard time" understanding the incident. But he said he thanked authorities for letting Tulsans know they take the investigation seriously.

"My hope is that we remain a strong city, a together city, and we don't want to see things that happen in other cities here in Tulsa, Oklahoma," he said. "And with the openness of the Police Department, it makes me feel good that nothing's going to be swept under the rug."

Watch the Tulsa Police Department news conference at facebook.com/tulsaworld. Keep following tulsaworld.com for news, video and more on this story.