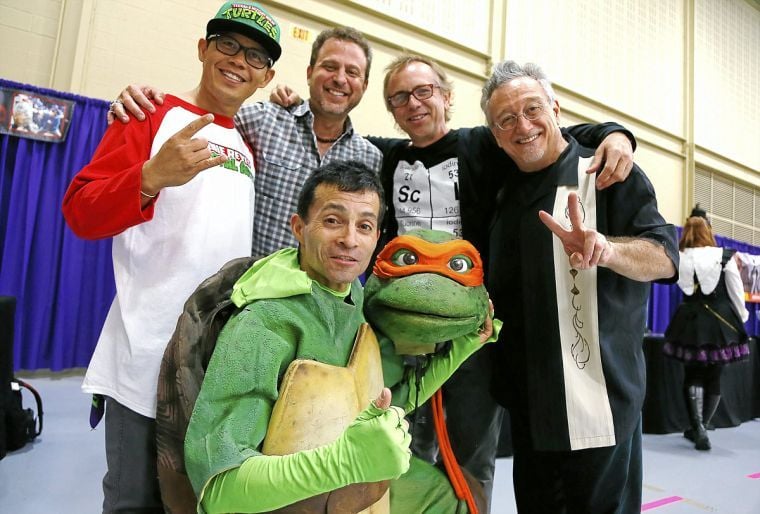 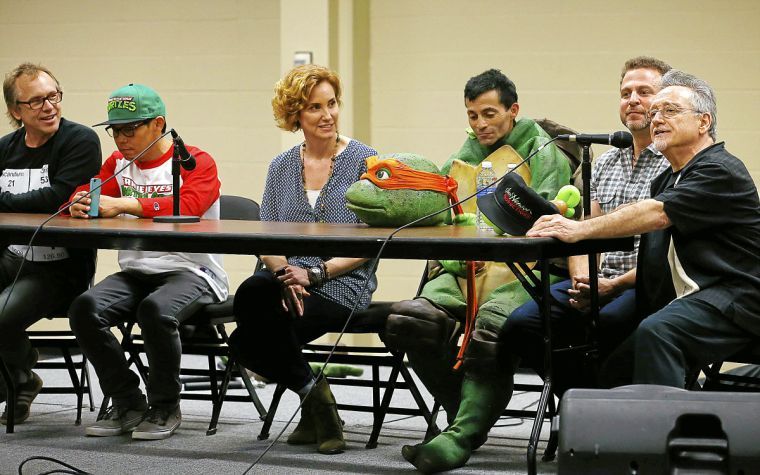 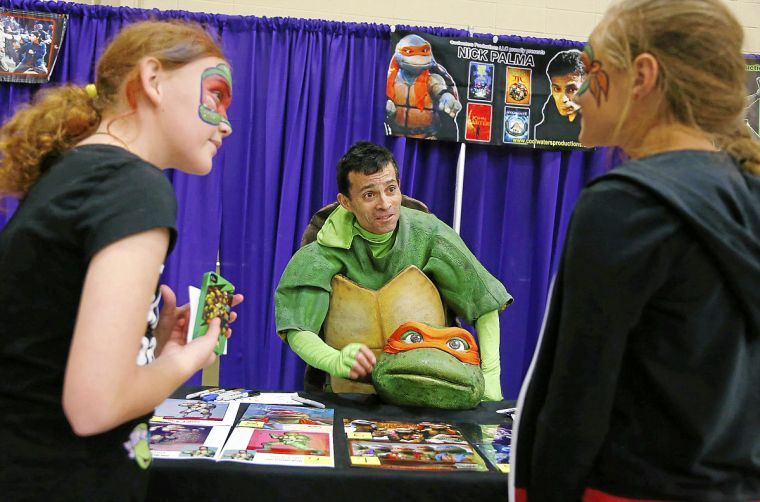 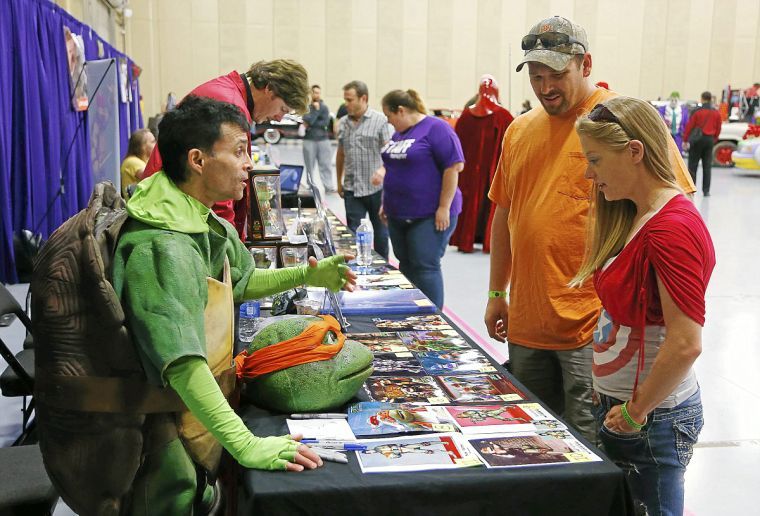 Nick Palma, who was inside the Michelangelo suit in the second Teenage Mutant Ninja Turtles movie, chats with fans Jarrod and Bridgett Stubblefield of Sapulpa during the Tulsa Comic Expo. JAMES GIBBARD/Tulsa World

Actress Judith Hoag, during a panel appearance Saturday at Tulsa Comic Expo, recalled getting a script and advice from her agent: Don’t let this movie title — “Teenage Mutant Ninja Turtles” — scare you away.

Hoag read the script and loved it. At the time, she was wrapping up a movie called “Cadillac Man” with Robin Williams.

She said she was embarrassed to tell folks that “Teenage Mutant Ninja Turtles” was her next project because nobody had ever heard of TMNT at that point.

“And so I said what the title was and Robin went out of his skin,” Hoag said. “He had the very first comic book and he was an avid collector and avid fan and he was so excited, so he kind of gave me my street cred that it was OK. Which I knew it was fine, but it sounded so odd.”

Hoag played April O’Neil in the first TMNT film in 1990 and, because of the enduring popularity of the pizza-loving heroes in a half shell, she secured her place in pop culture history.

“I do not kid myself that the first thing that will be in my obituary is April O’Neil,” Hoag said while appearing with other actors from the TMNT movie franchise on a “turtles reunion” panel Saturday at the Cox Business Center. Among the former TMNT actors was Nick Palma, who said he loves being a turtle and he proved it by wearing a turtle suit to the panel.

As it turns out, the most impressive super power of Leonardo, Donatello, Raphael and Michelangelo is their staying power. The teenage turtles have been around long enough to be thirtysomethings.

The Teenage Mutant Ninja Turtles first appeared in a black-and-white comic book in 1984. They beat the odds to find an audience and graduated to cartoons and movies.

Instead of being a passing fad, the turtles keep getting passed on to new generations.

Muskogee resident Cesar Ponce and Kristy Britton were wearing TMNT shirts as they wheeled a stroller into the panel room. Logan, the three-week-old baby inside the stroller, was wearing a TMNT onesie with a cape.

“He’s going to grow up liking the Ninja Turtles, too,” Ponce said. “I don’t know how you can’t not like them.”

John Bruner traveled from Blackwell to attend Tulsa Comic Expo and he said the turtle actors were the big draw. He’s 38 and got hooked on TMNT cartoons in the ’80s. His daughter, Sarah, is 8. They both fell victim to the turtles’ charms.

“They are four different personalities and I guess everybody kind of finds something to relate to in each one of them,” he said.

The turtles could have been a flavor of the day, or a flavor of a decade. Thanks to ongoing projects, they keep generating new fans.

Michelan Sisti, who was inside a Michelangelo suit in two films, suggested the longevity is due in part to TMNT’s universal themes — brotherhood, family, how to fit in when you don’t feel like you fit in.

Ernie Reyes Jr., who has played a turtle and a non-turtle in TMNT movies, said it’s very cool to be a part of something that became multigenerational. He said he teaches martial arts around the country and kids don’t recognize him, but parents say, “That’s Keno!”

Hoag recalled seeing an entire family — three generations — dressed as ninja turtles. She said there’s just something reassuring about something you loved when you were a kid.

“I have had more people come up to me and say ‘You know, when I’m having a really bad day, I just like to crack something cold and turn on the movie and go back in time’ and they feel a lot better, I think, because they were such sweet movies and fun.”

Jordin McNeill, a 9-year-old third-grader at Roy Clark Elementary School, was among audience members who pitched questions to the TMNT actors. He wore a turtles shirt and his face was painted like Michelangelo.

McNeill said he likes the turtles because they are mostly funny and because he and the turtles share a love of pizza. He thinks he might try a jelly bean pizza someday.

The number of McGirt-related criminal court filings logged so far this year is more than the Cherokee Nation has filed over the past 10 years combined, an official said.

Nick Palma, who was inside the Michelangelo suit in the second Teenage Mutant Ninja Turtles movie, chats with fans Jarrod and Bridgett Stubblefield of Sapulpa during the Tulsa Comic Expo. JAMES GIBBARD/Tulsa World