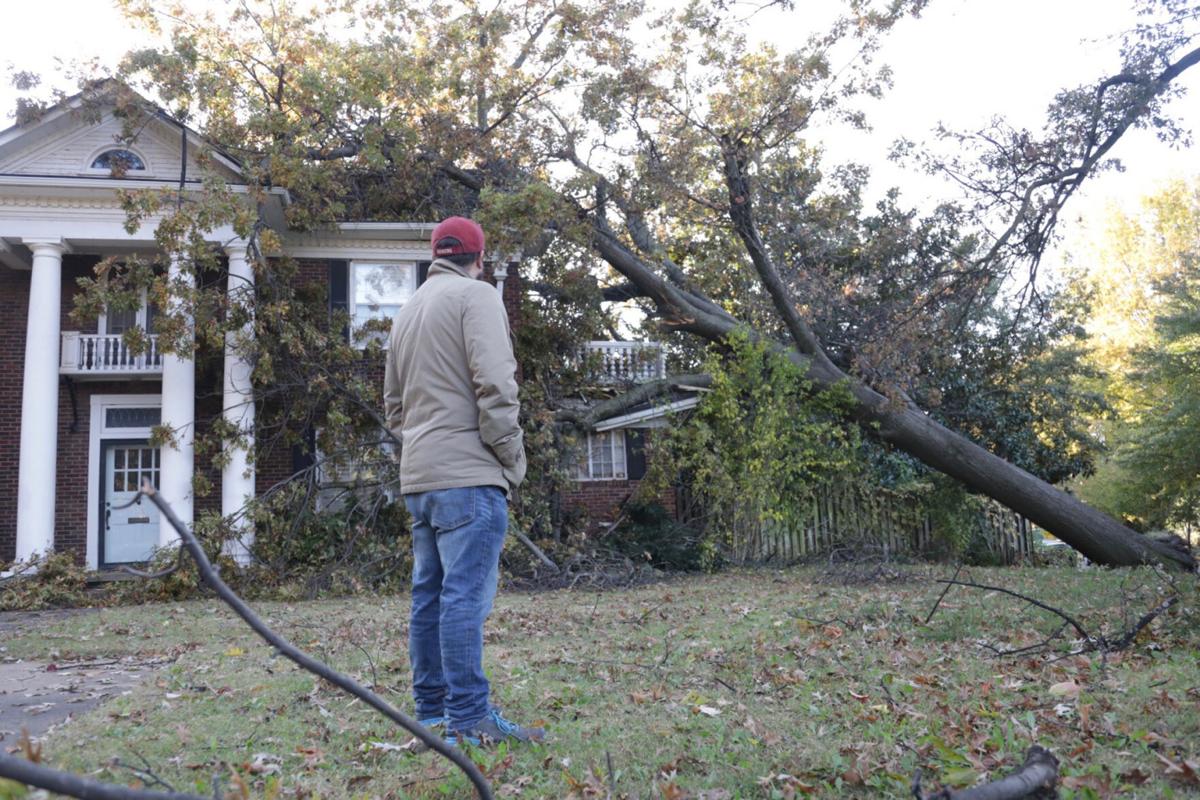 A homeowner looks in the light of day Thursday at a tree that fell onto his home when an EF0 tornado swept through his neighborhood near 21st Street and Utica Avenue the night before. 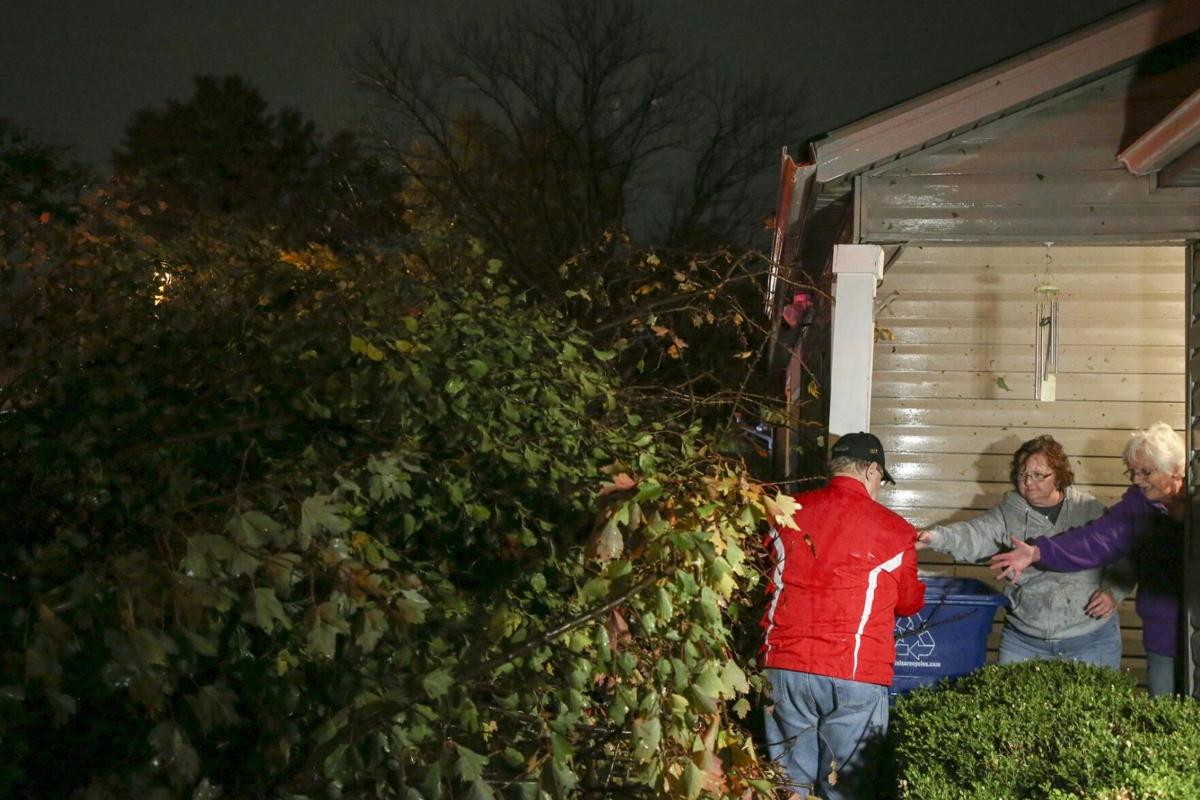 Ronald Linder gets help from his daughter, Jodi Martin, and wife, Everille Linder, while attempting to get into his home in the 11000 block of East 14th Court, near Garnett Road, after a tree fell during a severe storm Wednesday evening, blocking the entrance. 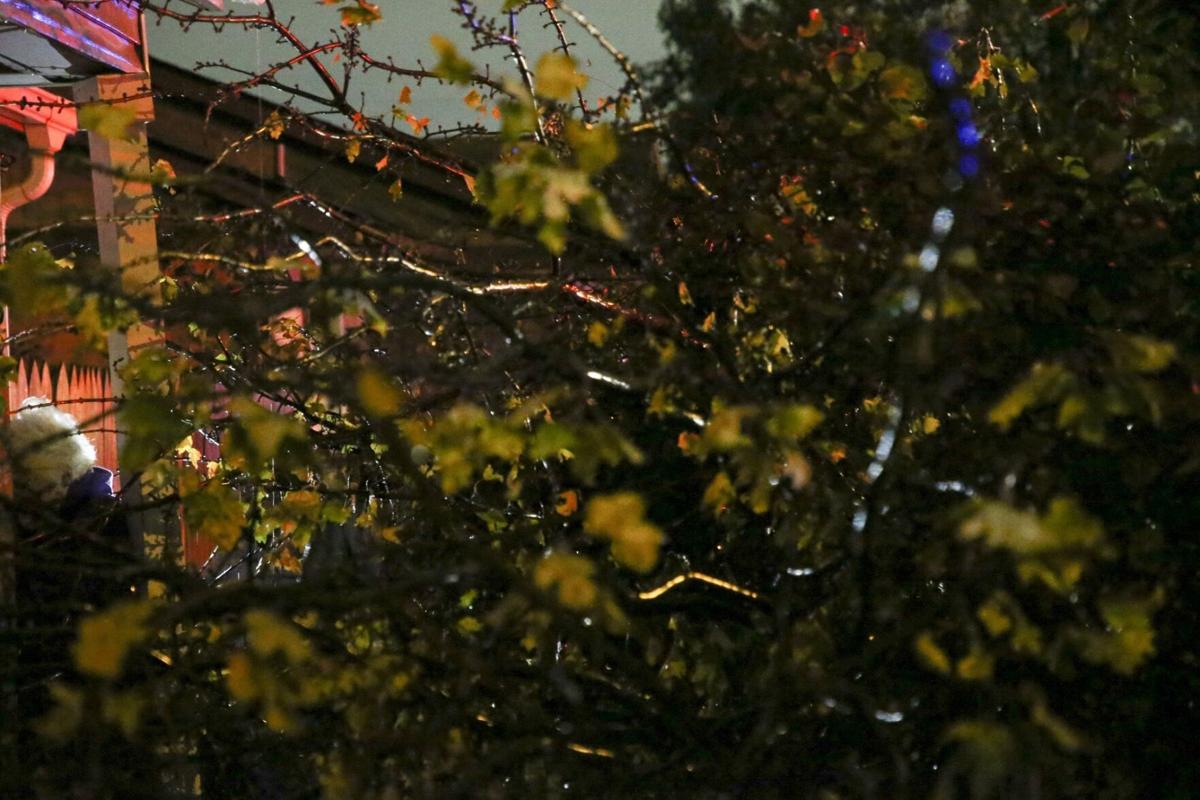 Everille Linder, seen at left, attempts to get into her home in the 11000 block of East 14th Court, near Garnett Road, after a fallen tree blocked the entrance Wednesday night.

This story was edited after publication to include new photos, an NWS Tulsa storm report and updated power outage information.

A possible tornado caused chaos across the Tulsa area Wednesday night in a storm that earlier in the day had only a “limited tornado threat.”

The National Weather Service issued the first tornado warning at 7:19 p.m. — with no previous tornado watch in effect — and within minutes of the warning said a tornado was on the ground three miles southwest of Catoosa moving at 50 mph.

Tulsa first responders rescued a woman from her home near 15th Street and Garnett Road after the storm caused her roof to collapse, leaving her trapped inside.

No injuries were reported there, although the storm did take out several large trees around the property. A local storm report posted at 7:21 p.m. by National Weather Service Tulsa indicates the area around her home was a possible tornado path.

The National Weather Service confirmed a tornado on the ground near Catoosa at 7:26 p.m.

The Catoosa Public Schools Board of Education was in executive session during a special meeting to discuss the hiring of a new superintendent when the tornado warning was issued, prompting attendees to take cover.

The meeting adjourned early with no action taken.

As the storm left Tulsa, it continued northeast into Rogers and Wagoner counties, then into Mayes and Delaware counties before the tornado threat was lifted about 9 p.m.

Before the storm, forecasters at the National Weather Service in Tulsa had focused their predictions Wednesday afternoon primarily on southeastern Oklahoma, saying a couple of storms with “at least limited tornado threat” could develop there as a front moved through Oklahoma.

“Although the overall tornado threat is limited, the potential for a tornado or two will exist for a short time early this evening across southeast Oklahoma,” forecasters said.

The Tulsa area and northeastern Oklahoma were forecast for only a severe hail threat and rainfall of about 1.25 inches.

The largest outages were reported in east Tulsa between 129th East Avenue and 145th East Avenue along 31st Street and along Interstate 44 from west Tulsa to U.S. 169. The estimated restoration time is 1 p.m. Thursday, according to PSO.

As crews work to restore power in the area, 31st Street is closed near 136th East Avenue early Thursday. According to workers, as many as five power poles in the area were blown down by the storm.

Joe Lovelace, a man who lives in the area, said Thursday he was watching the storm from his home when the transformers blew and the poles fell.

“The wind was blowing and the leaves — it looked like a tornado right at the front door,” he said.

Lovelace said shortly after, a car whipped off the road and pulled up to him. It was a Hispanic family seeking shelter.

He said the man and woman, who held a baby, used a translating app to tell him one of the poles almost fell on their vehicle. They stood inside with him for a while before determining they could head out safely.

Lovelace said the power lines fell mostly on the eastbound lanes of the road, so cars were still traveling westbound.

National Weather Service Tulsa storm reports include a grain silo that flipped on its side near 31st Street and County Line Road.

Kelsy Schlotthauer contributed to this story.

Lenzy Krehbiel-Burton contributed to this story.

Blinken: No concessions to Russia on Ukraine

Blinken: No concessions to Russia on Ukraine

Zane Bennett, 19, was arrested on a complaint of manufacturing an explosive. His girlfriend, Mariah Davis, is accused of shoplifting Lego sets from a Walmart near where she was stopped by police Monday.

Michael Overall: Is Yale Avenue really the most expensive road project in Tulsa history? It depends

The widening of 71st Street in the 1990s could still count as the costliest ever.

"Honestly, the building is so cool, but what's so awesome about today is that the spirit (that built it) is still alive in Tulsa,"  Mayor G.T. Bynum told a crowd Monday at the ribbon cutting.

Hospitalizations generally lag cases by a couple of weeks, and Dart noted that this past week his agency's ZIP code risk map based on active cases was, for the first time, entirely dark red for "extreme severe" spread of the disease.

Virus by the numbers: 11 charts that show how Tulsa and Oklahoma are coping with COVID-19

Find out how the omicron variant has impacted case counts, which areas are the most vaccinated, how many hospital beds are available across the state, and more with these charts and maps.

While driving north in Interstate 35's southbound lanes, a woman's car struck a southbound  Chevrolet Suburban head-on. She was pronounced dead at the scene about a mile north of Perry.

A homeowner looks in the light of day Thursday at a tree that fell onto his home when an EF0 tornado swept through his neighborhood near 21st Street and Utica Avenue the night before.

Ronald Linder gets help from his daughter, Jodi Martin, and wife, Everille Linder, while attempting to get into his home in the 11000 block of East 14th Court, near Garnett Road, after a tree fell during a severe storm Wednesday evening, blocking the entrance. 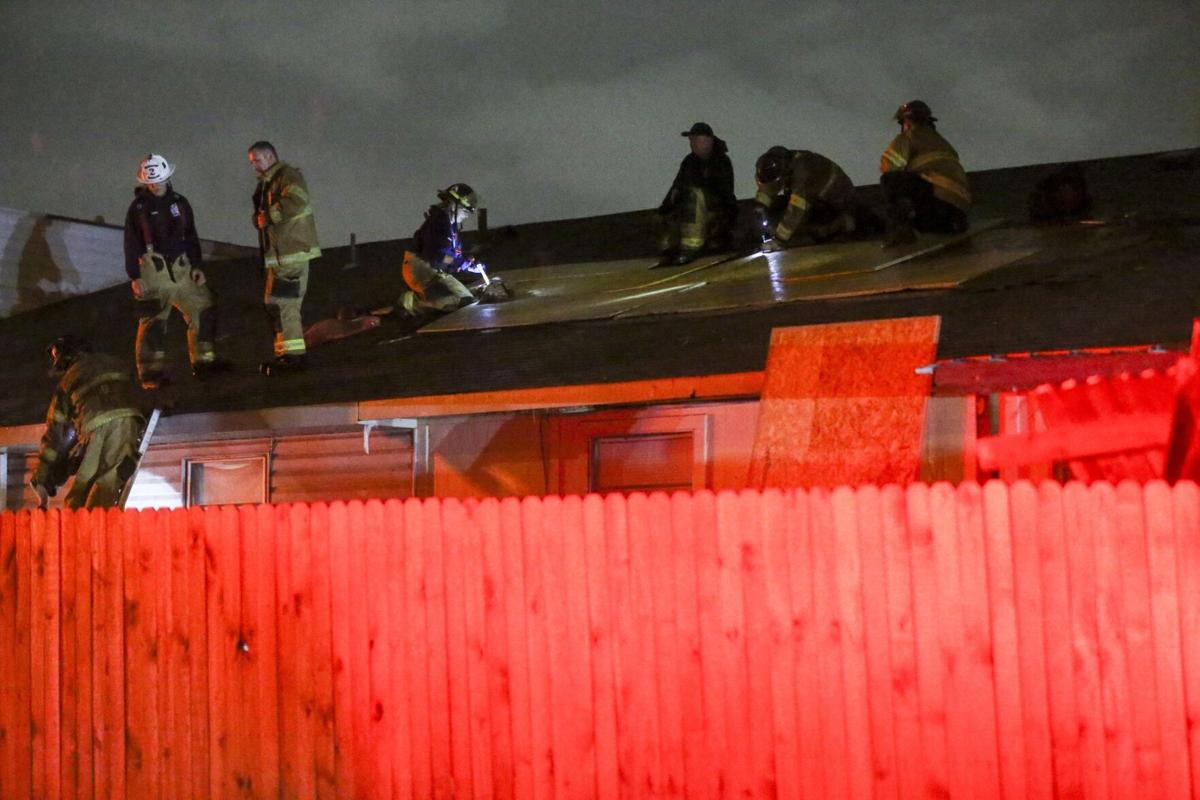 Lights from emergency response vehicles cast a red glow as firefighters cover a hole in a roof with plywood after Wednesday night's storm caused the damage in the 11000 block of East 14th Court, near Garnett Road. A woman reportedly was trapped in the house for a time but was not injured. 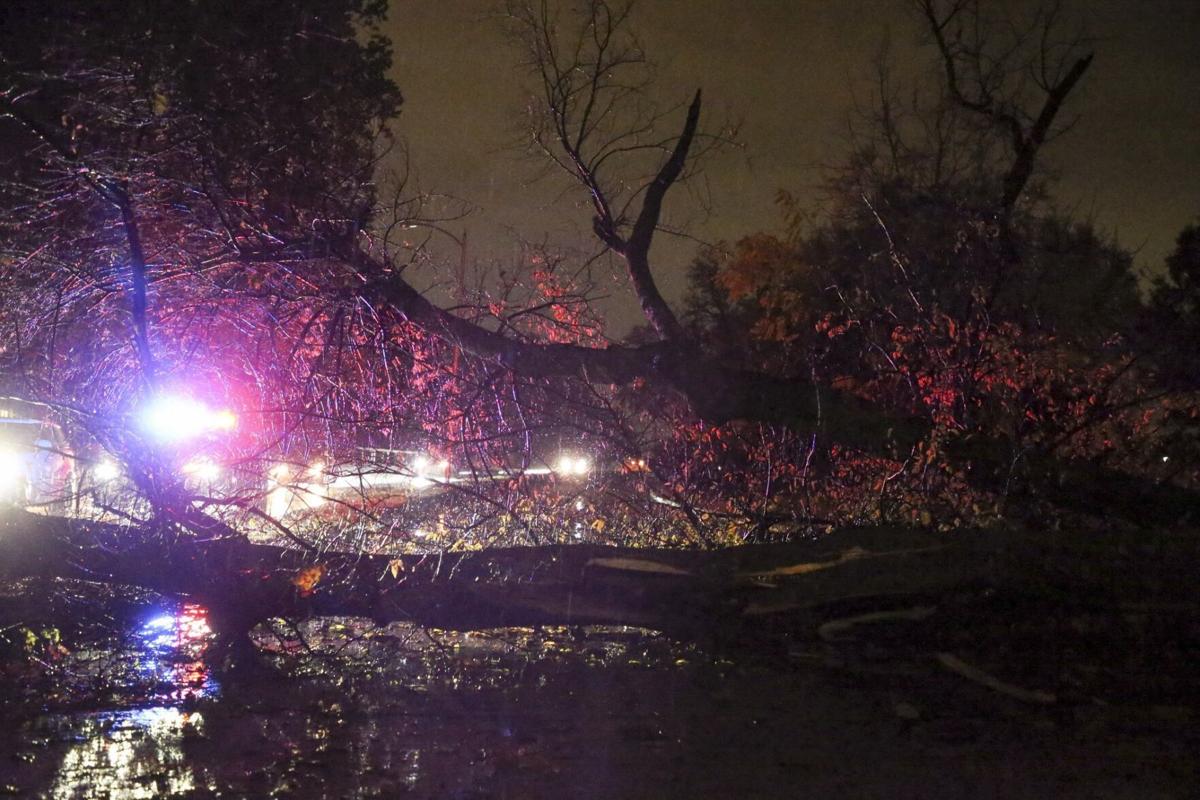 A downed tree shuts down the southbound lane of Riverside Drive near 41st Street after a severe storm hit the Tulsa area on Wednesday evening.

Everille Linder, seen at left, attempts to get into her home in the 11000 block of East 14th Court, near Garnett Road, after a fallen tree blocked the entrance Wednesday night. 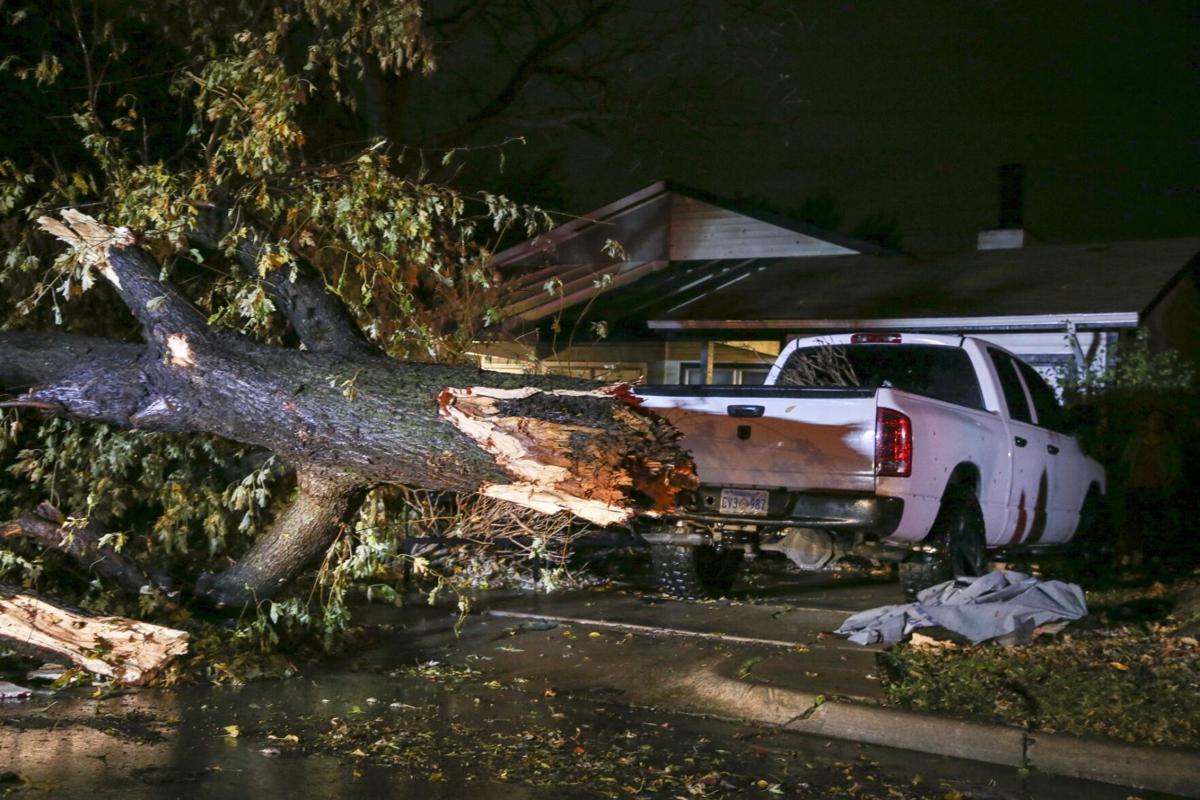 A broken tree lies in a driveway in the 11000 block of East 14th Court, near Garnett Road, after a severe storm hit the Tulsa area on Wednesday. 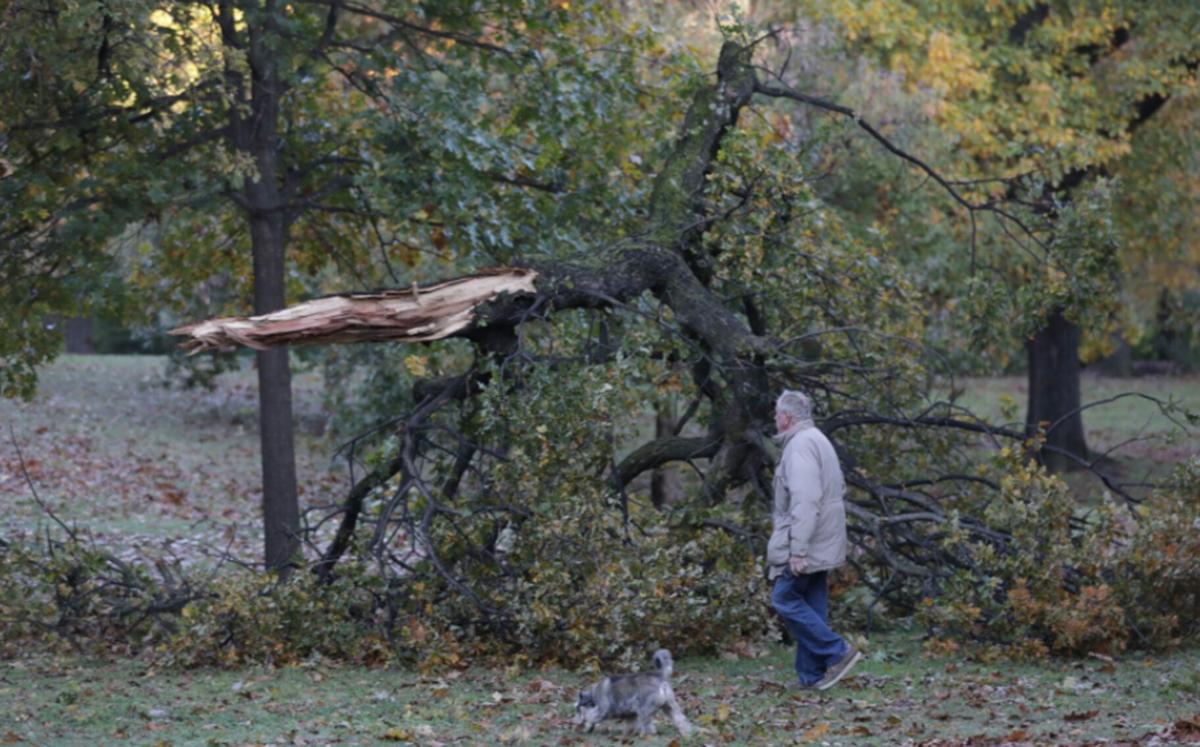