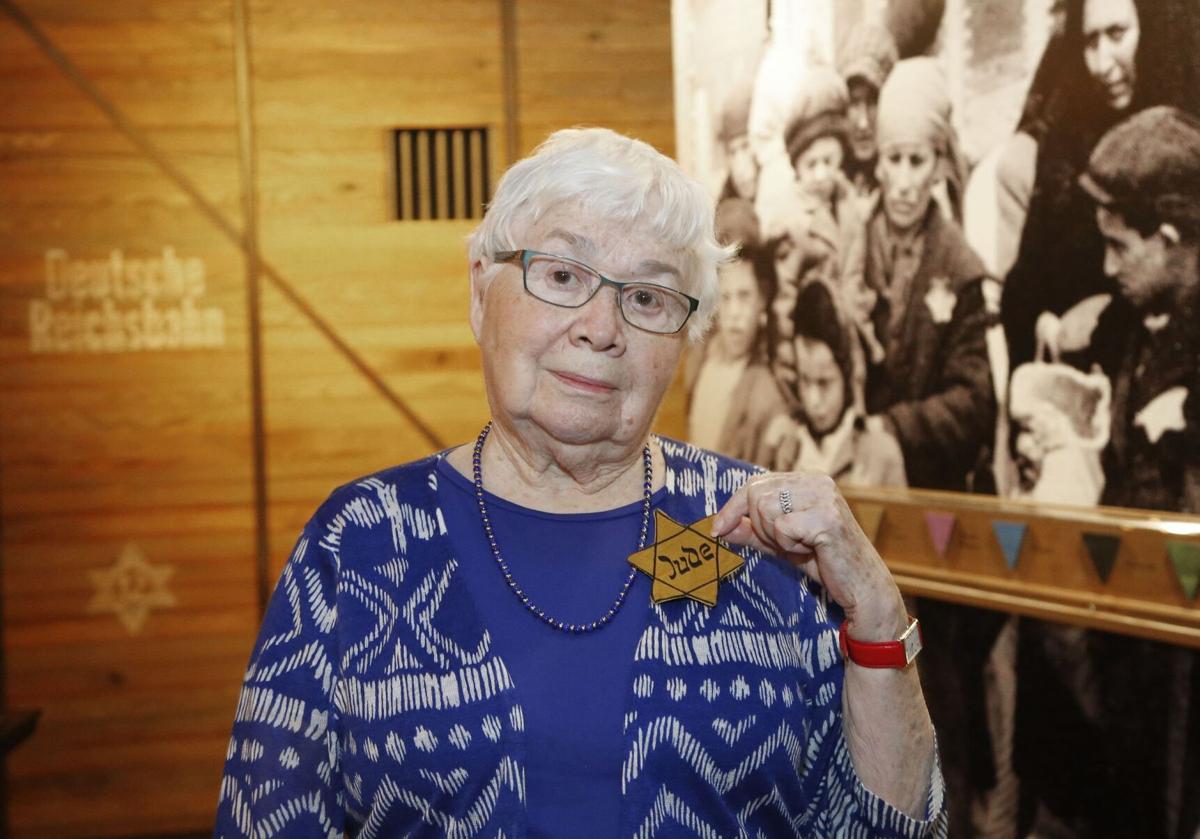 Eva Unterman displays her father’s Star of David at the Sherwin Miller Museum of Jewish Art’s Sanditen/Kaiser Holocaust Center. The Nazis forced European Jews to wear the emblem. Unterman says “it was intended as an insult, but to me it is a badge of honor.” 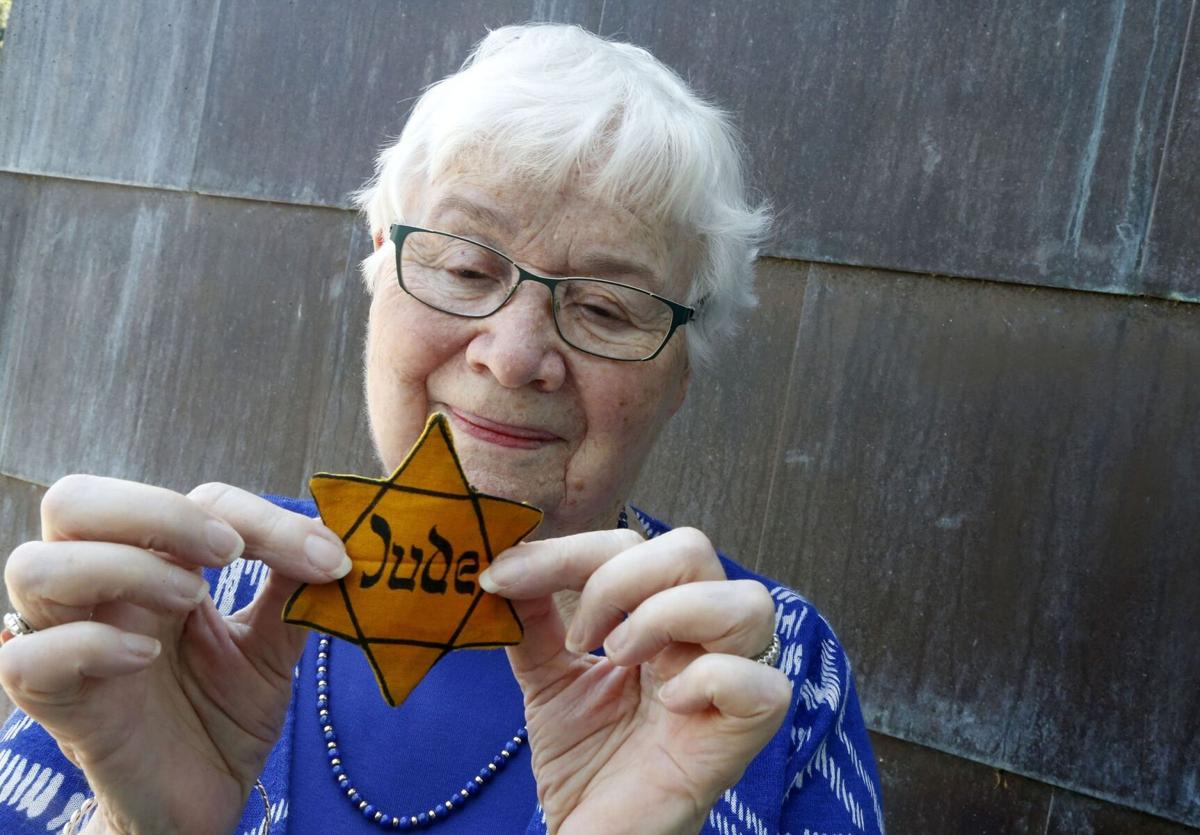 Eva Unterman’s father’s Star of David was found in his pocket after his death.

Why life for her family had changed so suddenly and so drastically, Eva Unterman had no way of understanding.

But one thing was obvious, even to a 6-year-old.

It had something to do with the yellow stars.

“I still remember clearly when my mother was sewing them on our coats,” Unterman said.

“We all got them. My parents, my two grandmothers who lived with us. Every time we went outdoors, we were required to have them on us, front and back.”

On each yellow cloth star was a single word in German, she added:

The longtime Tulsan, who along with her parents is among the survivors of the Holocaust, which saw millions of Jews and others systematically murdered, has recently had reason to reflect again on the tragic history behind the yellow Star of David patches.

A Jewish symbol mockingly co-opted by the Nazis to identify Jews in public, references to it have been popping up during the COVID-19 pandemic, with comparisons being made to mask and vaccine mandates.

In all instances, Jewish leaders have denounced the comparisons.

Unterman, 88, is no exception.

“Sadly, it’s not new,” she said. “And it’s outrageous and it’s insulting. That’s the only way I can think to describe it.”

It only serves to affirm, she added, that there’s more work to be done. Her mission to educate — to which she’s dedicated the latter part of her life — is still needed.

I’ve had a chance to interview Unterman a number of times. It’s always enlightening.

And sobering. Specifically, when we’ve talked about the Auschwitz concentration camp, where she and her parents were held before being transported to other locations to work.

This time, I wanted to talk about the Star of David controversy, and specifically an item that makes that subject even more personal for her — indeed, has kept it personal.

Among her most treasured keepsakes, Unterman still has the Star of David patch that belonged to her late father, Markus Wolman.

The star has a bit of a mystery surrounding it.

Until it was found in the pocket of his coat after his death, neither Unterman nor her mother knew her father had the star.

And she can’t for the life of her figure out “how he could’ve held onto it,” she said.

The family, like everyone who arrived at Auschwitz, had all of their clothes and belongings taken away.

One thing is certain, though: It must’ve been important to him.

And that makes it doubly important to his daughter.

The German takeover of Lodz, Poland, Unterman’s hometown, began in 1939.

“It was just certain isolation from anything that I remembered as normal,” Unterman said.

“I was no longer allowed to play with my non-Jewish friends.

Worst of all for Unterman — no school.

For months, she had been looking forward to her seventh birthday in October and being able to start first grade.

Now that was ruled out, too.

“I kept hearing that it is because we’re Jewish,” she said of all the changes.

“I didn’t really know what that meant. My parents weren’t very observant. I thought of myself as a Polish girl more than Jewish.”

Through all the tumult, as well as through their later imprisonment, Unterman’s rock was her mother, Esther.

“She was a strong, powerful woman, … a powerhouse” and someone “I could trust completely.”

A few years ago, thumbing through a book on the Holocaust she found on a bargain rack, Unterman was stunned to recognize her late mother in an old photo.

The image, which shows her walking through the streets of Lodz, was an incredible find, she said. It’s now part of the new Sanditen/Kaiser Holocaust Center collections at Tulsa’s Sherwin Miller Museum of Jewish Art.

Notably, her mother is wearing the telltale star.

“The idea was, when we were outdoors, we could be easily identified,” Unterman said.

Thus publicly branded Jews, the campaign of dehumanization could proceed apace, inspiring first taunts, beatings and a stripping of basic rights, then moving on to confinement in a ghetto and, ultimately, imprisonment and murder.

Unterman and her parents would somehow survive it all. Her two grandmothers would not.

Suffice it to say, for Unterman, the Star of David is not to be referenced lightly.

And for anyone who feels tempted to invoke it, or the Holocaust in general, for comparison purposes, she has a simple request.

Better still, have a docent take you through it.

The experience just might move you to consider a survivor’s point of view, she said.

As for why her father kept the star — a reminder, seemingly, of horrors he would want to forget — Unterman still would like to know.

It’s too late now to ask him.

But maybe, she said, it’s because the meaning changed for him, like it has for her.

“As I always say, it was intended as an insult, but to me it is a badge of honor,” she said.

“I will never part with it,” she added of her father’s star.

A governing board was recently appointed to help the troubled online school come into compliance with state law. But Kathren Stehno quit, alarmed by what she’d seen and heard behind the scenes.

Ohio State announced the hiring of the 56-year old coordinator for the same position with the Buckeyes late Tuesday afternoon.

Michael Overall: 'With tolls for the rest of our lives,' Oklahoma turnpikes keep a debate raging for 75 years

The argument was the same then as it is now: The state needs better highways for economic development.

For some Tulsa landlords, patience is running thin with rental assistance

As more tenants rely on taxpayer support, property owners say they can't wait to pay their own bills.

First lady Jill Biden arrived in Tulsa Thursday afternoon for a later visit to a school in Tahlequah.

A resigning Epic Charter Schools board member alleges the school broke the law in withdrawing "a high percentage" of students for truancy and handing out high-dollar bonuses to top executives recently.

Eva Unterman displays her father’s Star of David at the Sherwin Miller Museum of Jewish Art’s Sanditen/Kaiser Holocaust Center. The Nazis forced European Jews to wear the emblem. Unterman says “it was intended as an insult, but to me it is a badge of honor.”

Eva Unterman’s father’s Star of David was found in his pocket after his death.