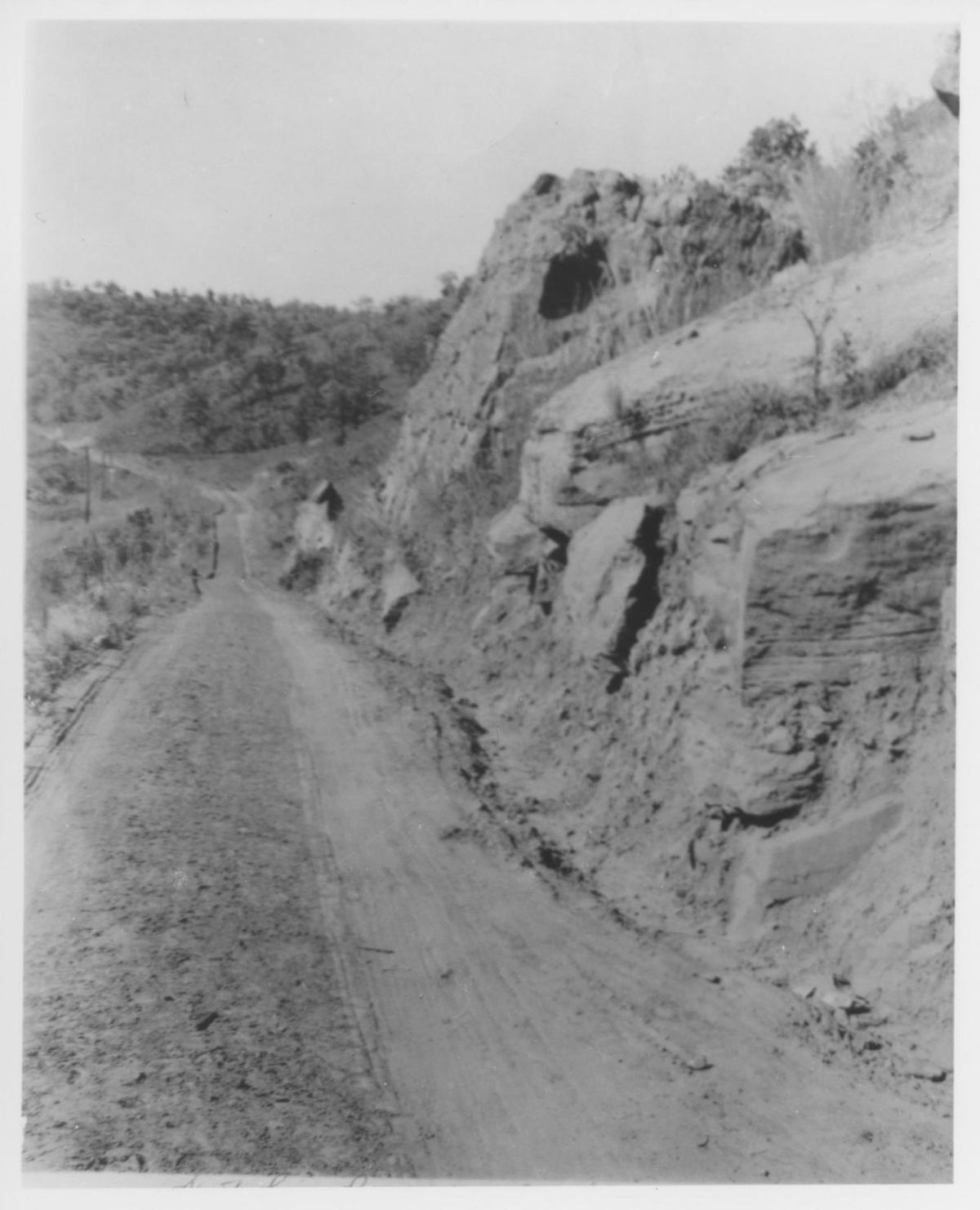 Distinctive cliffs line a portion of River Road, now Avery Drive, near the Arkansas River. The area was once known as Lost City, because the cliffs resembled buildings, according to legend. The photo is circa 1914 or '15. Tulsa Historical Society & Museum 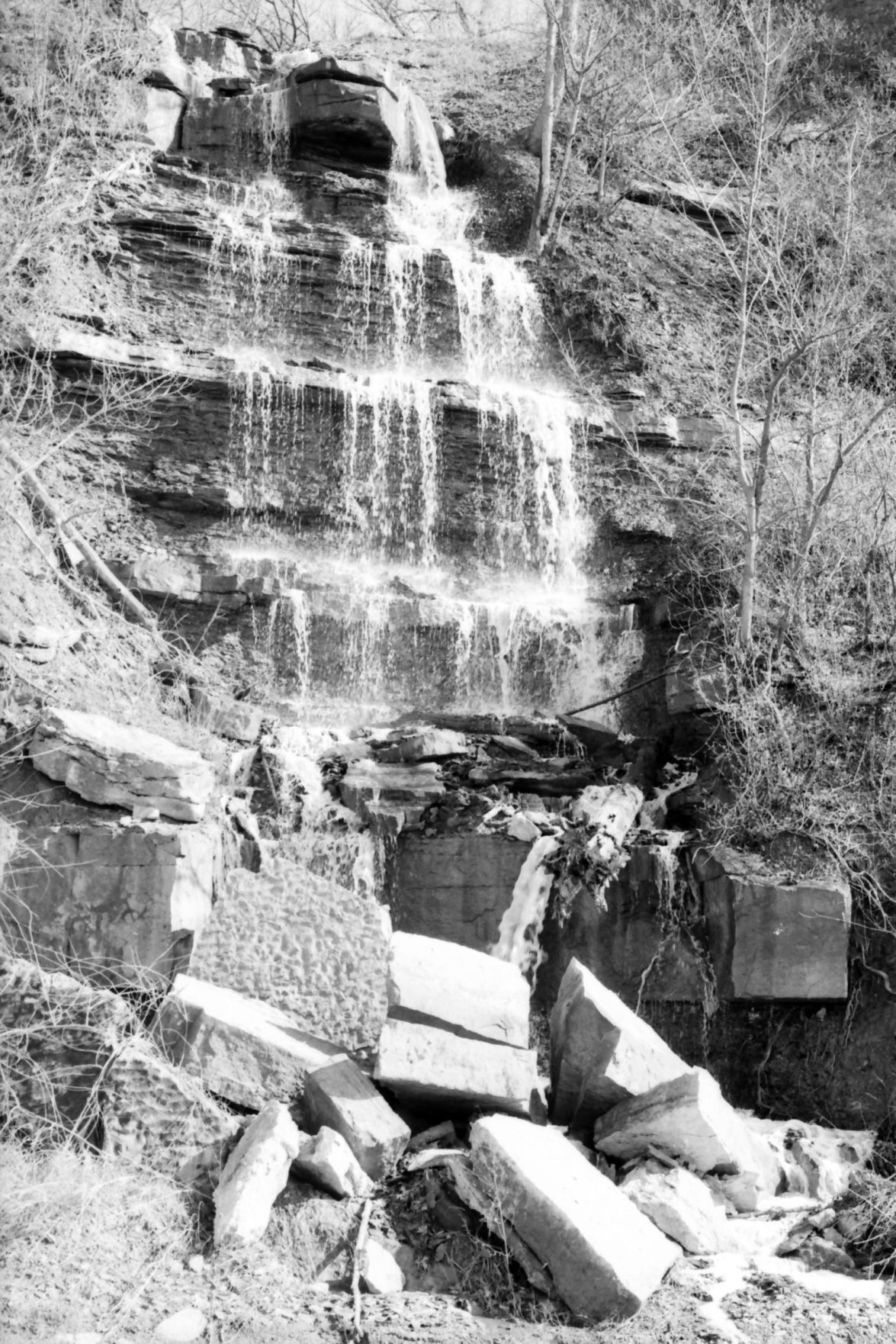 Polluted water from a landfill runs down rocks along Avery Drive in March 1973. Toxic chemicals seeped into the road base causing dangerous cracks. Tulsa World file

Cyrus Avery called it his favorite road. To others, it was “the road to nowhere.” Still others felt it should never have been built.

Since 1958, the 3.5-mile, two-lane scenic byway has been known as Avery Drive, named for the man most-remembered as the father of the Mother Road, Historic Route 66.

It runs from west 21st Street near Chandler Park to Oklahoma 97 in south Sand Springs.

“Idyllic Avery Drive, a hilly, winding riverside road embraced by dense woods and foliage,” is how Tulsa World reporter Manny Gamallo described it in 1990. “To one side is a steep slope broken by occasional rocky bluffs and inviting trails. On the other side, breaks in the trees offer glimpses of a quietly flowing Arkansas River, which runs parallel.”

The road, with its 5-foot-wide cycling lanes, is popular with bicyclists. Rock-climbing enthusiasts also flock to the area and to nearby Chandler Park, noted for its craggy limestone cliffs and boulders.

But the road has been plagued by numerous landslides and shifting pavement, making it one of Tulsa County’s costliest stretches of road to maintain.

In 1990, then-Tulsa County Commissioner John Selph said Avery Drive should never have been built because of unstable rock formations beneath it, but it will never be shut down.

One of the earliest historical accounts of the area was by physician and naturalist Samuel Washington Woodhouse, who accompanied the U.S. Army Corps of Topographical Engineers in 1849 when they were surveying the boundaries of the Creek Nation in Indian Territory.

While camped along the Arkansas River with the surveyors, Woodhouse kept a diary where he sketched the weathered limestone formation, known locally as Lost City, on the south side of the river.

Avery said the term “Lost City” came from the fact that the massive cliffs looked like buildings.

“In the old days, outlaw gangs used the rocks as a hideout,” Avery told The Tulsa Tribune in 1956.

He said early settlers in wagons had worn trails on either side of the river that were later acquired by the railroads.

“When Red Fork was a pretty good cow town and before Tulsa was thought of, travelers used to ferry across the river and take the trails on which the Frisco and Katy railroads are now built,” Avery said.

Avery was a Tulsa County commissioner when he began building what was then known as the River Road to link Sand Springs and Tulsa. He brought convicts from the Oklahoma State Penitentiary to begin construction in 1914. They started on the Tulsa end, only to be blocked by a rock quarry and work halted in 1915. Avery left office in 1916 and his successor abandoned the project.

For a period, he said, the governor referred to it as the “Whiskey Road” because so many Tulsans traveled the route to Keystone for liquor.

But Avery didn’t give up. Twenty years later, he resumed work using labor provided by the Works Progress Administration, a New Deal agency that employed millions of people during the Great Depression. This time, he started on the Sand Springs end.

And it only took 40 years

Again, work halted over right-of-way issues at the site of the quarry where a large stone-crusher operated. “The road to nowhere,” as the Tribune branded the project, was tied up in court for decades because the quarry owner and Tulsa County could not agree on the value of the land.

But problems were not over for the scenic road.

From 1972 until the early ‘80s, the old rock quarry was used as a landfill, accepting all manner of solid, liquid and sludge waste, including jet fuel, acids, caustics and solvents.

In 1973, World reporter Ralph Marler and photographer J.R. Jones visited Avery Drive after the county closed it due to dangerous cracks in the pavement. Torrents of discolored, foamy water cascaded from the landfill site.

Polluted landfill liquids were seeping into the road base and acting as a lubricant, Marler reported, causing part of the road to slide downhill toward the Frisco tracks and the river.

The Environmental Protection Agency in 1988 designated the area as the Compass Industries Superfund site. The EPA completed its cleanup of the site in 1991, delisted it in 2002 and continues monitoring it.

“I fully expect it to settle again,” said county engineer Tom Rains, “but this fix will hold for a while.”

'Everything has changed': Bixby holds remembrance event to mark 9/11 anniversary

The annual event also served to give attendees a look at ongoing updates to the memorial, first established in 2002 by the Friends of Irving Foundation with the steel beam as its centerpiece. The attacks killed nearly 3,000 people, including 2,753 in airliner crashes at the World Trade Center.

Distinctive cliffs line a portion of River Road, now Avery Drive, near the Arkansas River. The area was once known as Lost City, because the cliffs resembled buildings, according to legend. The photo is circa 1914 or '15. Tulsa Historical Society & Museum

Polluted water from a landfill runs down rocks along Avery Drive in March 1973. Toxic chemicals seeped into the road base causing dangerous cracks. Tulsa World file