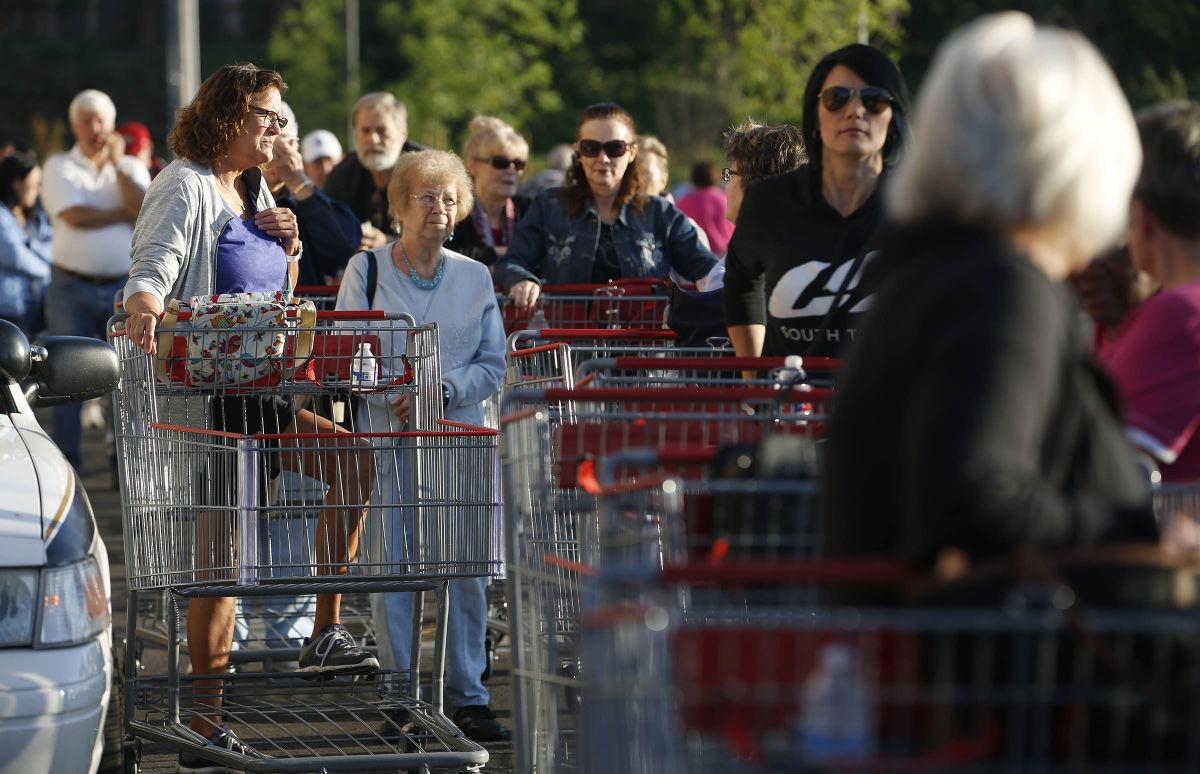 Shoppers line up outside Costco Wholesale at 103rd Street and Memorial Drive before the store’s grand opening on Thursday. JAMES GIBBARD/Tulsa World 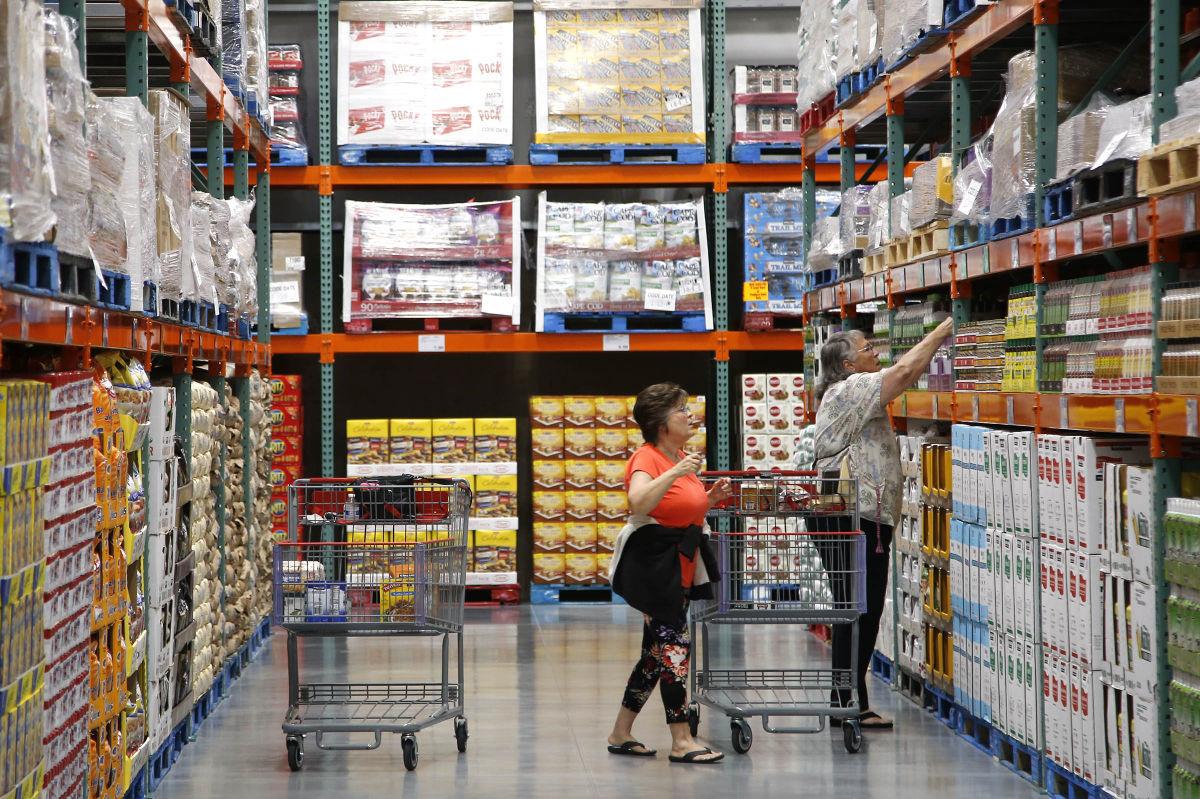 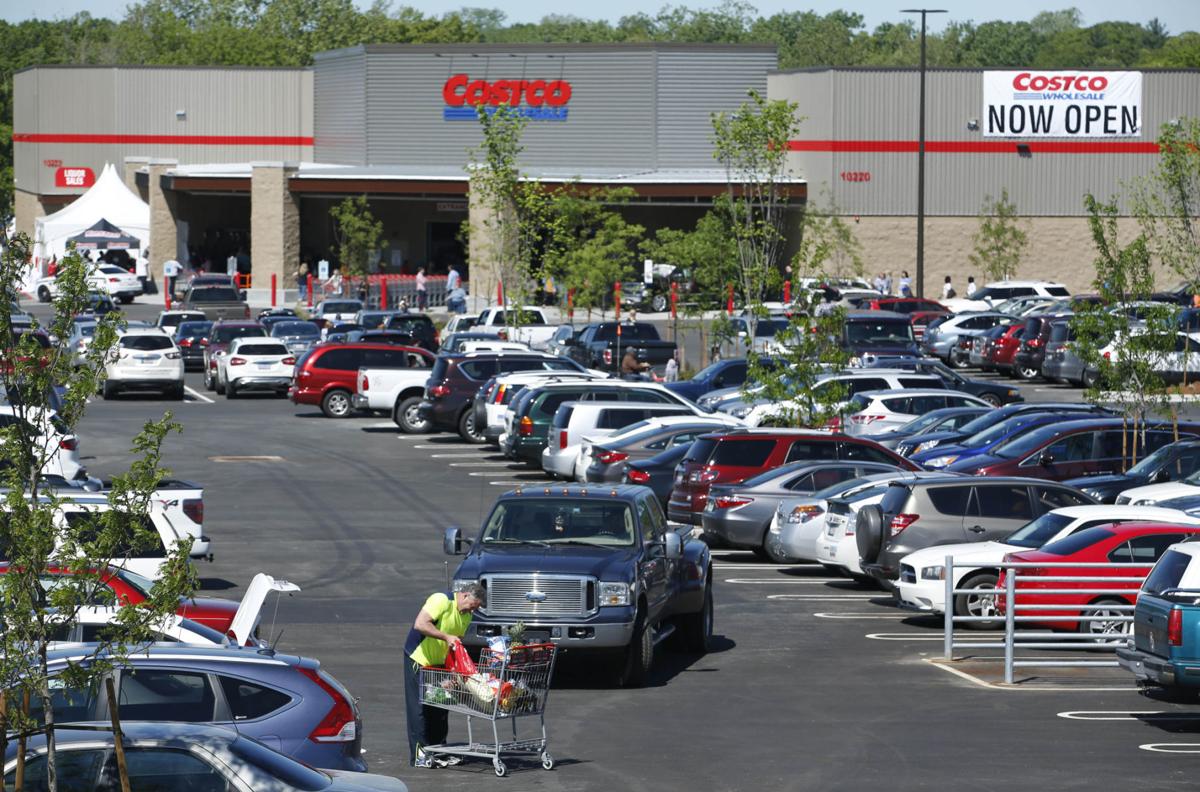 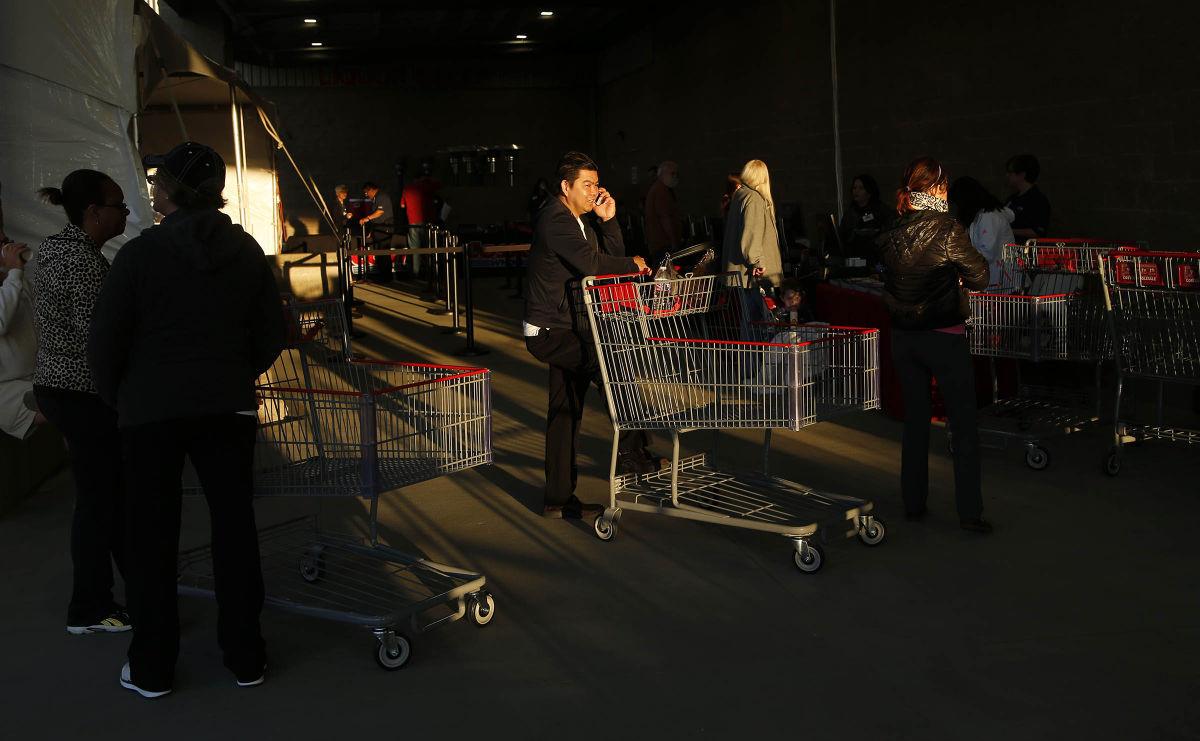 Customers including Sukimen Lius from Tulsa waits outside Costco in Tulsa, Okla., on April 21, 2016, for its grand opening. JAMES GIBBARD/Tulsa World 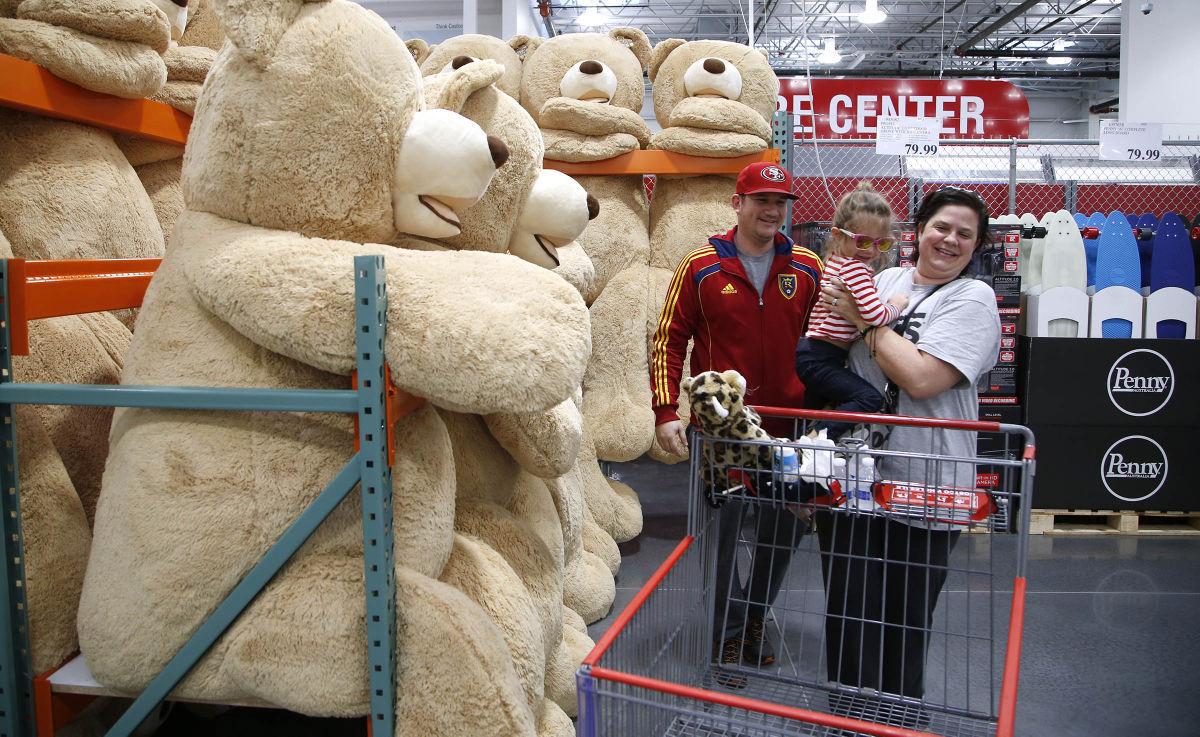 Alan and Kiara Munk and their daughter Perry, 3, look at teddy bears inside Costco on Thursday. JAMES GIBBARD/Tulsa World 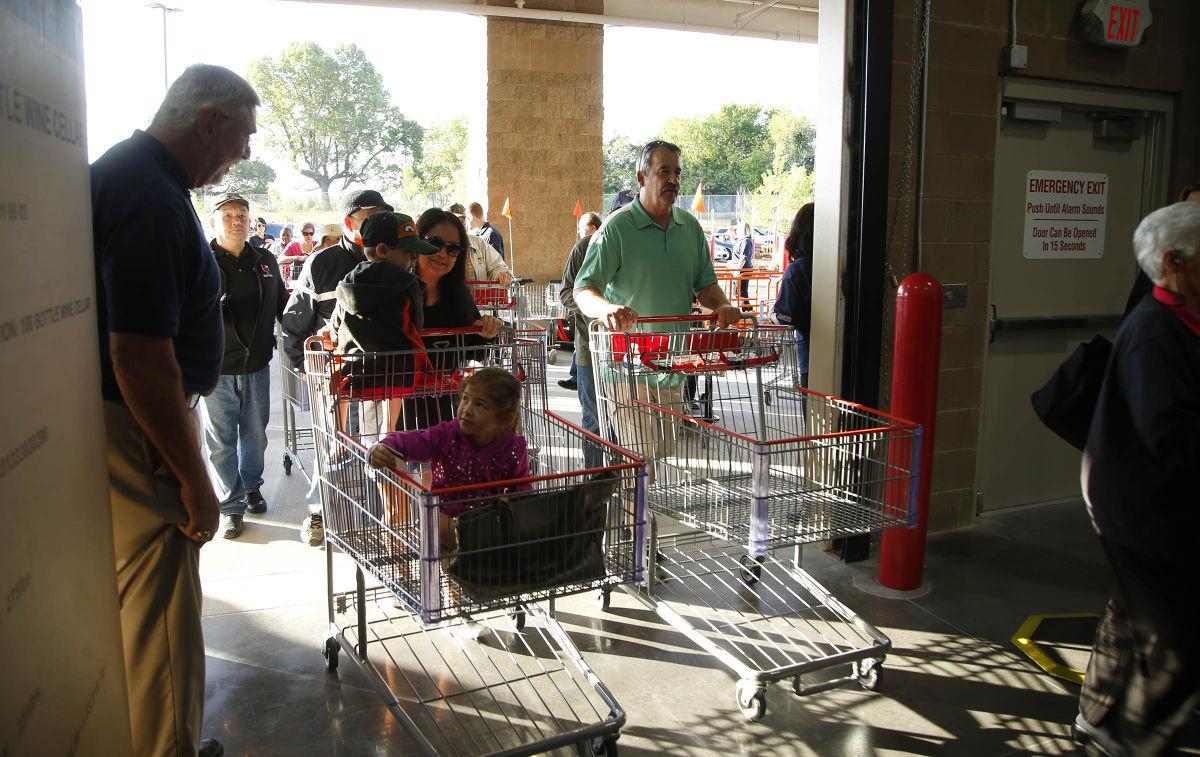 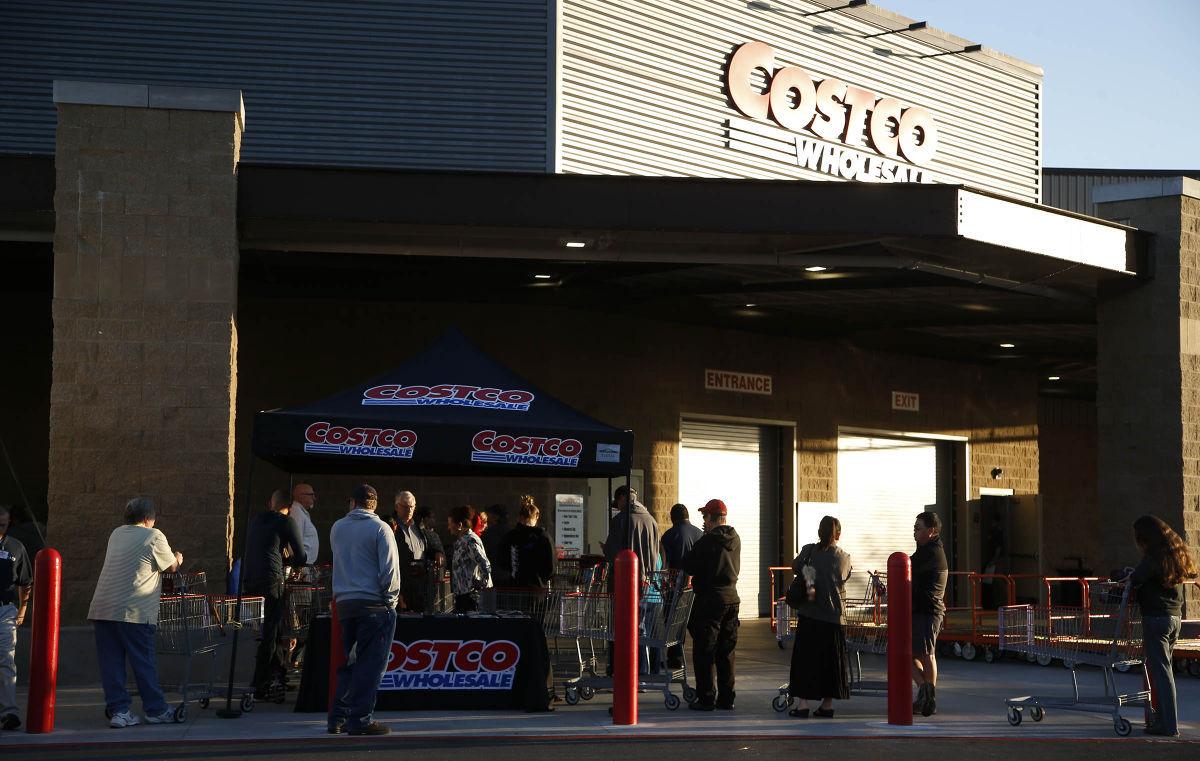 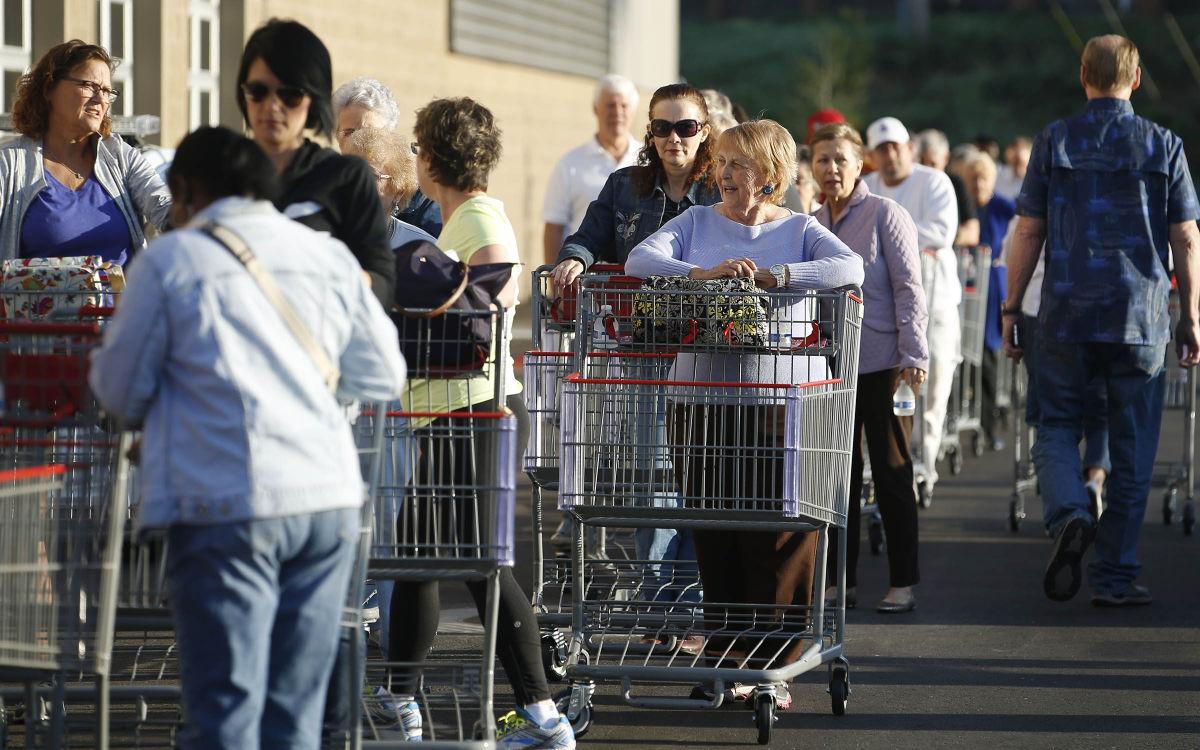 Linda Young of Tulsa and Grand Lake area resident Darrell Jones didn’t know each other before Thursday morning. But, as the first two people in line for the grand opening of Oklahoma’s first Costco Wholesale store, they got in at least two hours of conversation before being among the first shoppers through the doors.

“I’ve been waiting for this since I moved here in 2008,” Young said before the store, at 103rd Street and Memorial Drive, opened promptly at 8 a.m. “It’s the quality of their products. Their store brand (Kirkland Signature) is as good as national brands. They have a great selection of items. Their line of selection is excellent and very well-priced.”

Jones, who arrived at 5:30 a.m., led the pack of about 150 people who waited in line — with oversize red-and-gray grocery carts in tow. Costco staff members worked the line periodically to pass out water bottles to waiting customers, then directed them to tents to sign up for memberships that start at $55 annually and go up to $110 for executive members.

Once the doors opened, a steady stream of people from all over northeast Oklahoma flowed in. Among the first things they saw were a 98-inch television — listed at $33,999 — as well as life-sized teddy bears, designer purses and jewelry and multiple Kirkland Signature-brand items from clothes to beauty products. Then they got to the aisles of bulk items, and the deli and meat section.

“I mostly came to people-watch,” Jones joked. “I didn’t expect to be first (in line.) I like it a lot better than the other warehouses in town. They have a good variety of merchandise, and I like that they treat their people well.”

The new 148,000-square-foot store is the Issaquah, Washington-based retailer’s 705th store in the world and 493rd in the U.S. Previously, Costco fans in Oklahoma had to travel to the closest stores available — in the Dallas or Wichita, Kansas areas.

But despite the wide selection of stores, Mike Young of Claremore said he expects to visit the new Costco at least twice a week. He was among those who waited in line to purchase tires and Kirkland Signature household items, which he said are “the best stuff you can get.”

“We’ve been to Dallas, Kansas City (and) Virginia (Costco stores),” Young said. “We kept a membership even though we live in Oklahoma. When we’re out of state, we’d go stop at one. I’ve been waiting forever. … I heard stuff about them getting one in Oklahoma City, and that fell through over there. I’m glad Tulsa got it first.”

Greg Barnhart, general manager of the store, said stories such as those of Mike Young and Linda Young aren’t unusual. Costco workers had set up tents to sign up new members all over Tulsa in the months leading up to the opening, which Barnhart on Monday said “outpaced expectations.”

“I just talked to a gentleman from Owasso a few moments ago. We’re drawing people in who are willing to drive 20, 30, 40, 50 miles, and it’s just been an amazing response,” Barnhart said Thursday morning. “We’ve had such a warm welcome from this community. We’re just very excited to be here, and we’re proud and honored to serve this city.”

For Colin Smith, though, the new store — which he said Tulsa has needed “for a long time” — is close to his neighborhood. Smith, who lives in Bixby, purchased steak, hamburger meat, salmon, laundry soap, coffee beans, apples and paper goods for what he said were “fair” prices.

“I think Costco has a reputation No. 1 for treating their employees fairly, paying them fairly and hiring and promoting them fairly, and that’s little different from some other stores in our area,” he said, adding that he will “absolutely” return to Costco. “And I think they’re great retail. Their brands are known and really good quality, and I’m glad they’re here.”

Muscogee (Creek) Nation says goal is that no cases fall through cracks in justice system.

Shoppers line up outside Costco Wholesale at 103rd Street and Memorial Drive before the store’s grand opening on Thursday. JAMES GIBBARD/Tulsa World

Customers including Sukimen Lius from Tulsa waits outside Costco in Tulsa, Okla., on April 21, 2016, for its grand opening. JAMES GIBBARD/Tulsa World

Alan and Kiara Munk and their daughter Perry, 3, look at teddy bears inside Costco on Thursday. JAMES GIBBARD/Tulsa World