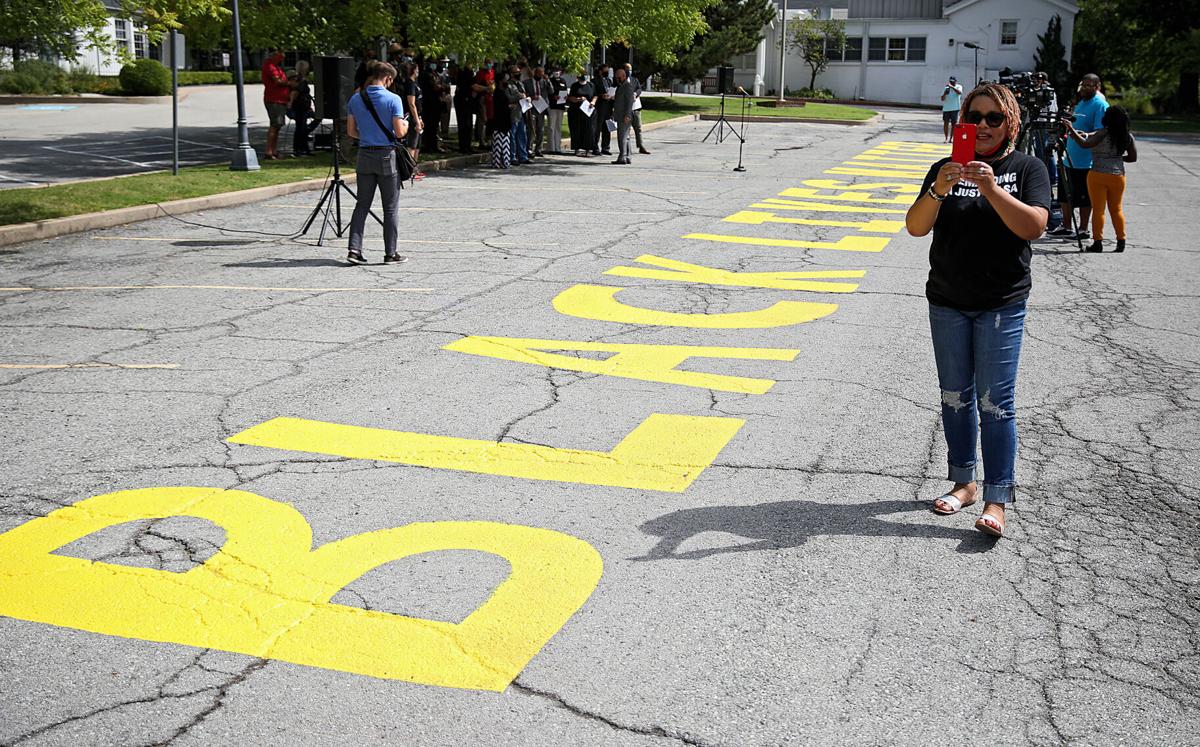 Nicole Ogundare films the Black Lives Matter mural painted on the parking lot of All Souls Unitarian Church shortly before a news conference on Wednesday. 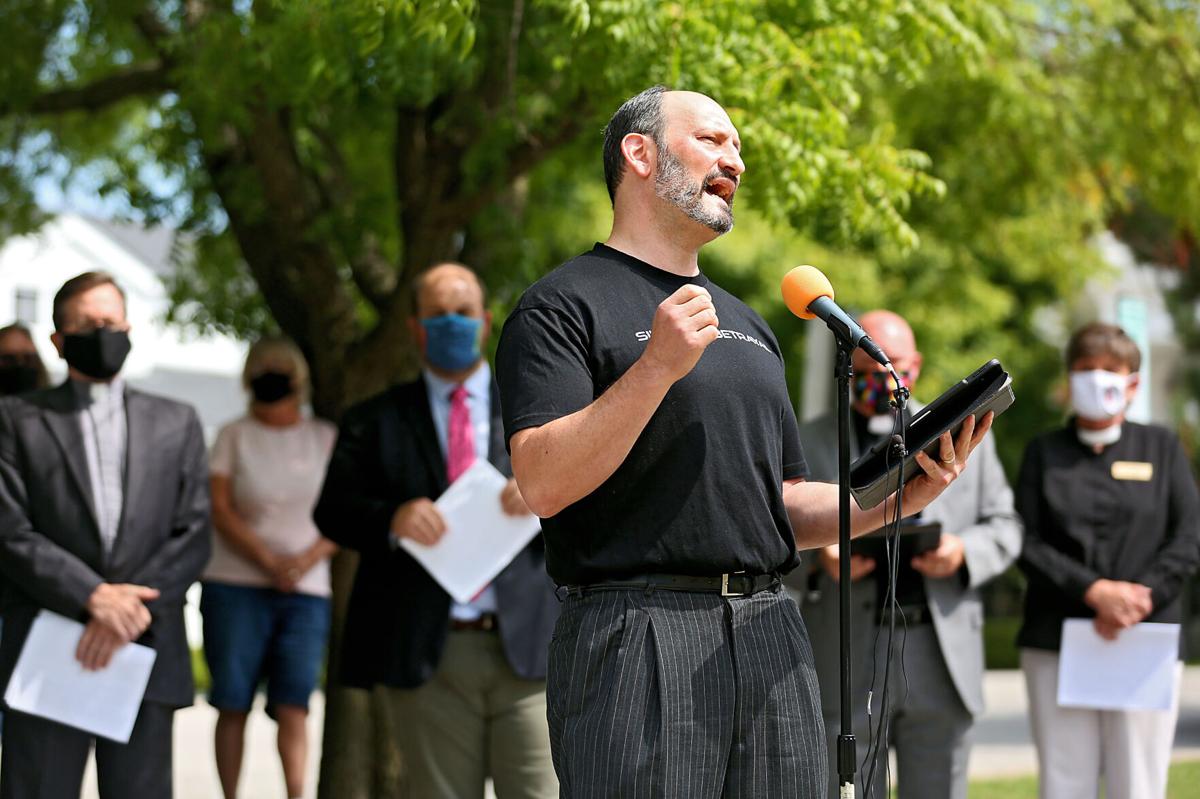 The Rev. Marlin Lavanhar speaks Wednesday outside All Souls Unitarian Church, where a Black Lives Matter mural has been painted on the parking lot. 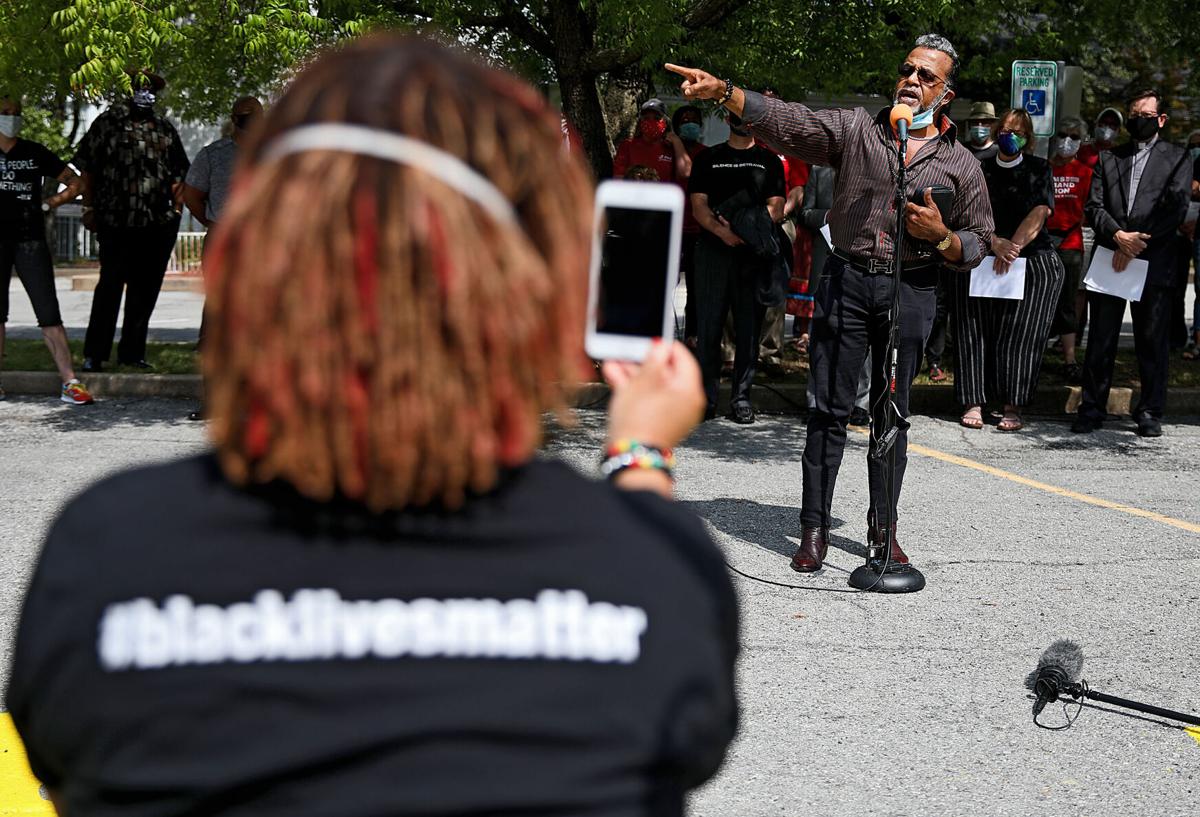 Nicole Ogundare films Bishop Carlton Pearson as he speaks about a Black Lives Matter mural on the parking lot at All Souls Unitarian Church. 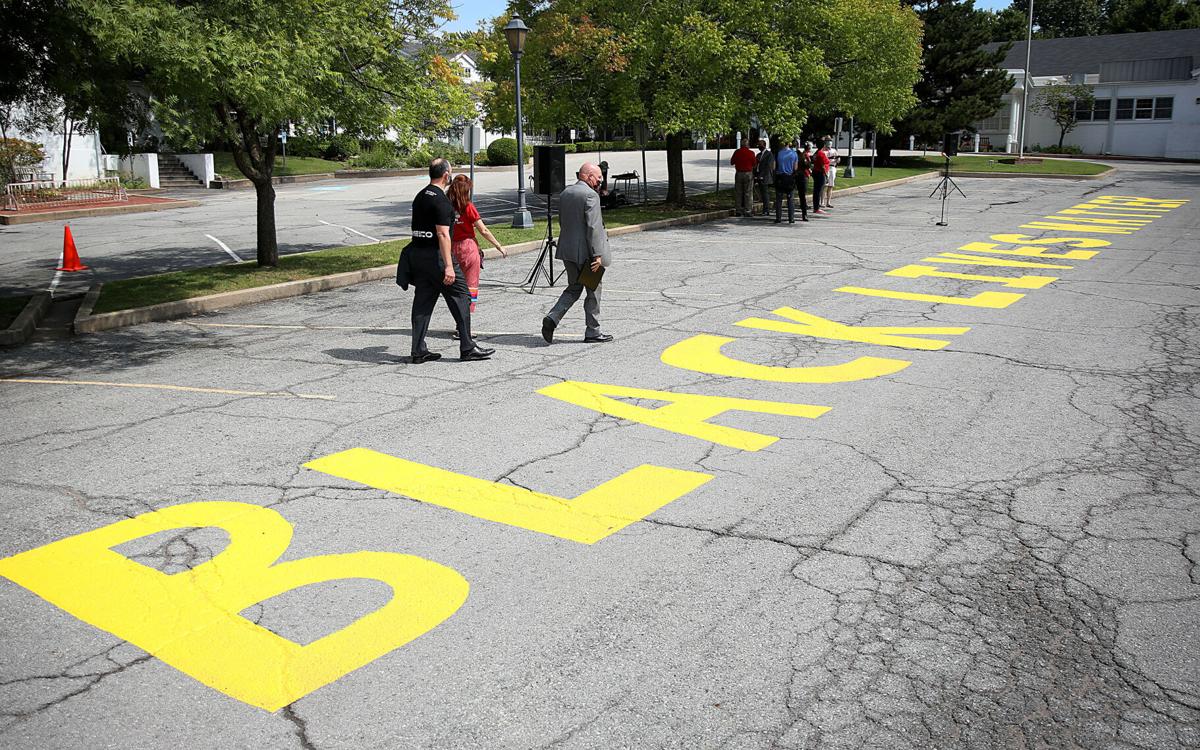 A Black Lives Matter mural is revealed on the parking lot at All Souls Unitarian Church on Wednesday.

'Terence would always have someone on our sofa:' Crutcher Foundation serves, donates to homeless shelter

Religious leaders from Tulsa’s churches and temples gathered at a midtown church Wednesday to issue a proclamation: Black lives matter.

More than a half-dozen leaders at the houses of worship gathered at noon outside All Souls Unitarian Church, located at 29th Street and Peoria Avenue, in front of a mural that spelled out that proclamation in large yellow block letters.

The statement and murals come on the heels of Tulsa city officials deciding to remove the Black Lives Matter mural on Greenwood Avenue in the coming months as part of a scheduled street repaving project.

Local activists painted Tulsa’s BLM sign on the street without the city’s permission on the eve of Juneteenth, the day before President Donald Trump’s campaign rally at the BOK Center.

“We admit in this moment that this symbolic public art mural is not the systemic change that is so desperately needed, but we also see a need, the need, right now to hold up this phrase, ‘Black Lives Matter,’ and to reclaim it for our lives, for all our lives, here in Tulsa,” said Rabbi Dan Kaiman of Congregation B’Nai Emunah. “We do not view this phrase, ‘Black Lives Matter,’ as political speech but as a declaration of something that should be obvious but is not.

“When we say Black lives matter, we are not saying that other lives don’t or asserting some agenda other than to make the most basic claims about something that has not been historically true in our city or nation.”

Additional murals will be painted at other houses of worship over time, he said.

Local clergy announced the plan on the fourth anniversary of Terence Crutcher’s death. Moore said Crutcher’s death connects Tulsa to the “larger, awful story of violence against Black and brown bodies all across our nation.”

Moore challenged “people who have been historically known as white” to reflect on the historical and systemic ways that Black lives did not matter and to work to change that. He described that as an act of faith directed by a God “having created each of us in God’s own image and commands us to love one another as God loves us.”

“It is that faith that calls us to seek higher ground than we have sought thus far, to stop limiting ourselves to the weak constraints of right versus left and begin to talk instead about right and wrong,” he said.

“If we do not, in a world that is placing increasing demands on our interconnectedness, we will remain trapped by our past unable to move forward together to truth and reconciliation, to accountability and understanding, to a place where we could say with authenticity that ‘all lives matter.’”

Featured video: Al Sharpton in Tulsa in 2017: 'I come to pray, I come to rally and I come to mend broken hearts'

Oct. 25, 2016: GoFundMe ordered to be placed in Terence Crutcher's estate

May 15, 2017: Defense rests after unsuccessful motion for mistrial

May 18, 2017: Jury 'could never get comfortable with the concept of Betty Shelby being blameless'

May 23, 2017; Tulsa officer Betty Shelby gets back pay; moves to administrative duty

Aug. 27, 2018: Betty Shelby teaches course for officers on 'surviving the aftermath of a critical incident'

June 1, 2020: After protests, Tulsa mayor, advocates for police reform agree to work together for substantial changes

Nicole Ogundare films the Black Lives Matter mural painted on the parking lot of All Souls Unitarian Church shortly before a news conference on Wednesday.

The Rev. Marlin Lavanhar speaks Wednesday outside All Souls Unitarian Church, where a Black Lives Matter mural has been painted on the parking lot.

Nicole Ogundare films Bishop Carlton Pearson as he speaks about a Black Lives Matter mural on the parking lot at All Souls Unitarian Church.

A Black Lives Matter mural is revealed on the parking lot at All Souls Unitarian Church on Wednesday.