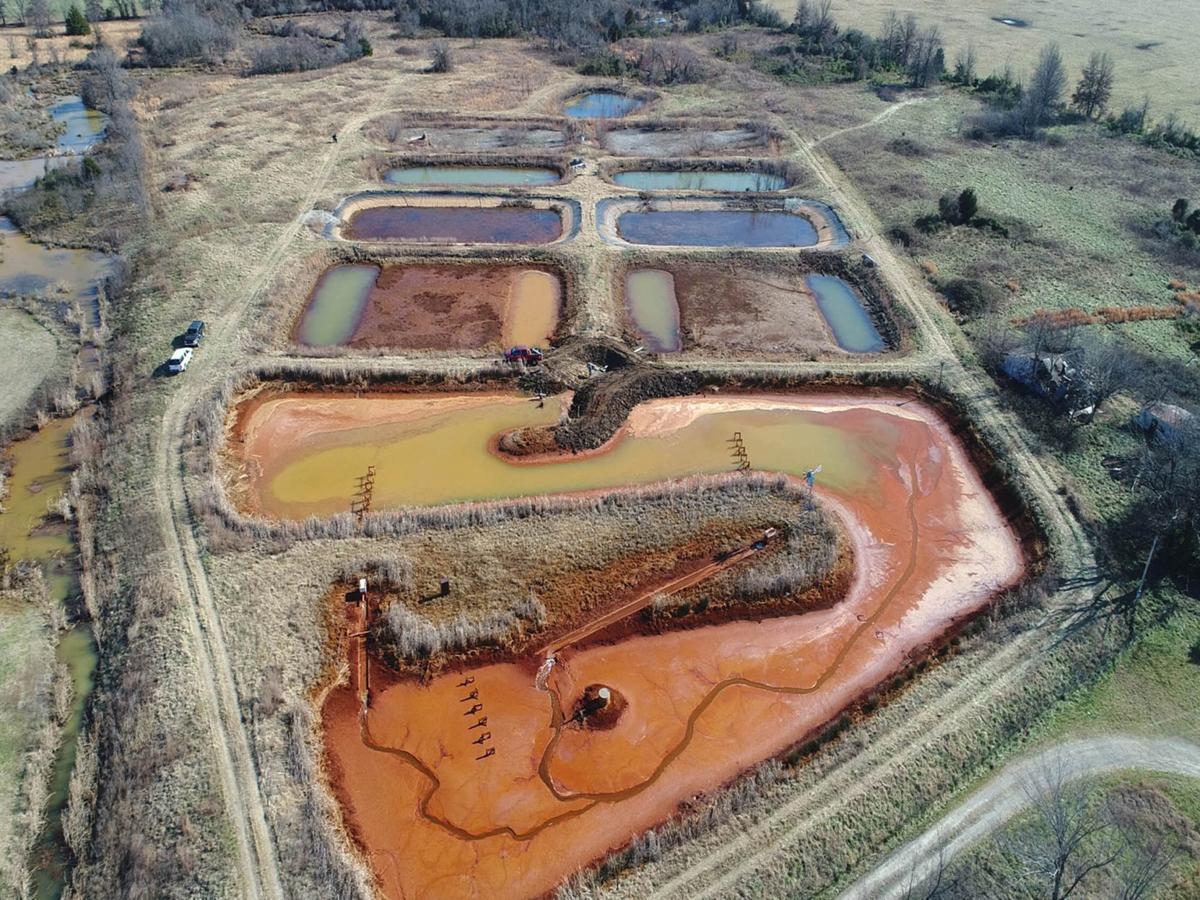 An aerial view of the Mayer Ranch shows a passive treatment system that uses mushroom compost to sequester and filter out heavy metals from polluted water at the Tar Creek Superfund Site. ROBERT NAIRN/Courtesy 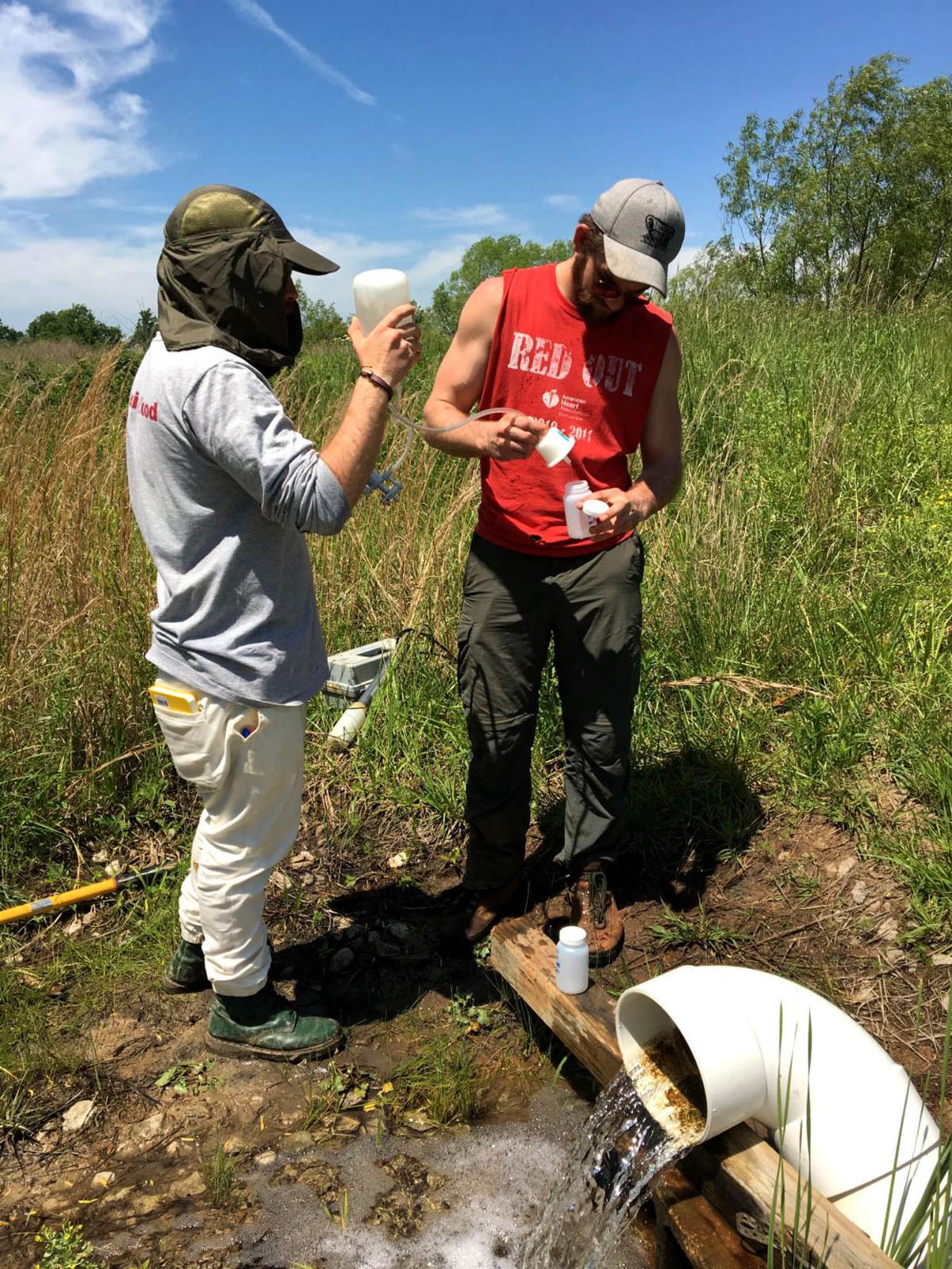 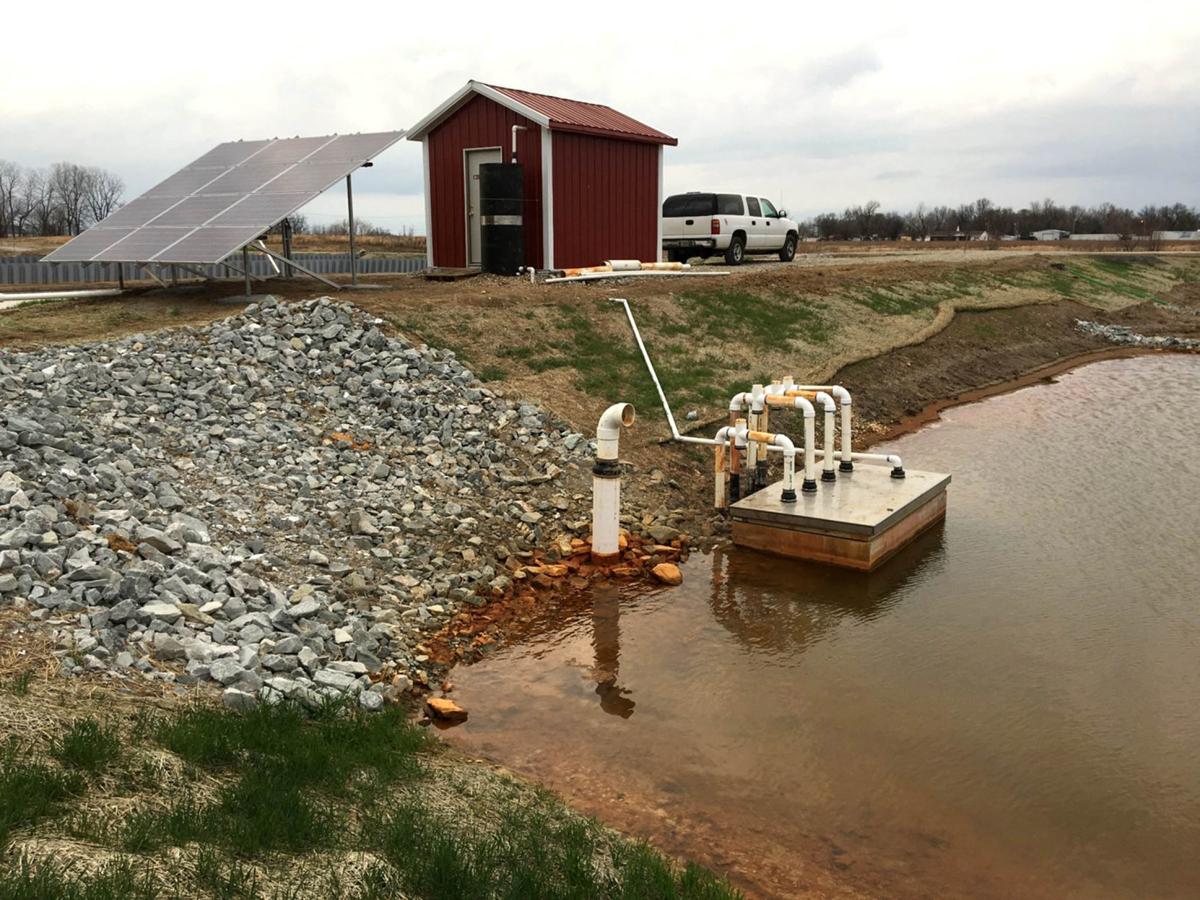 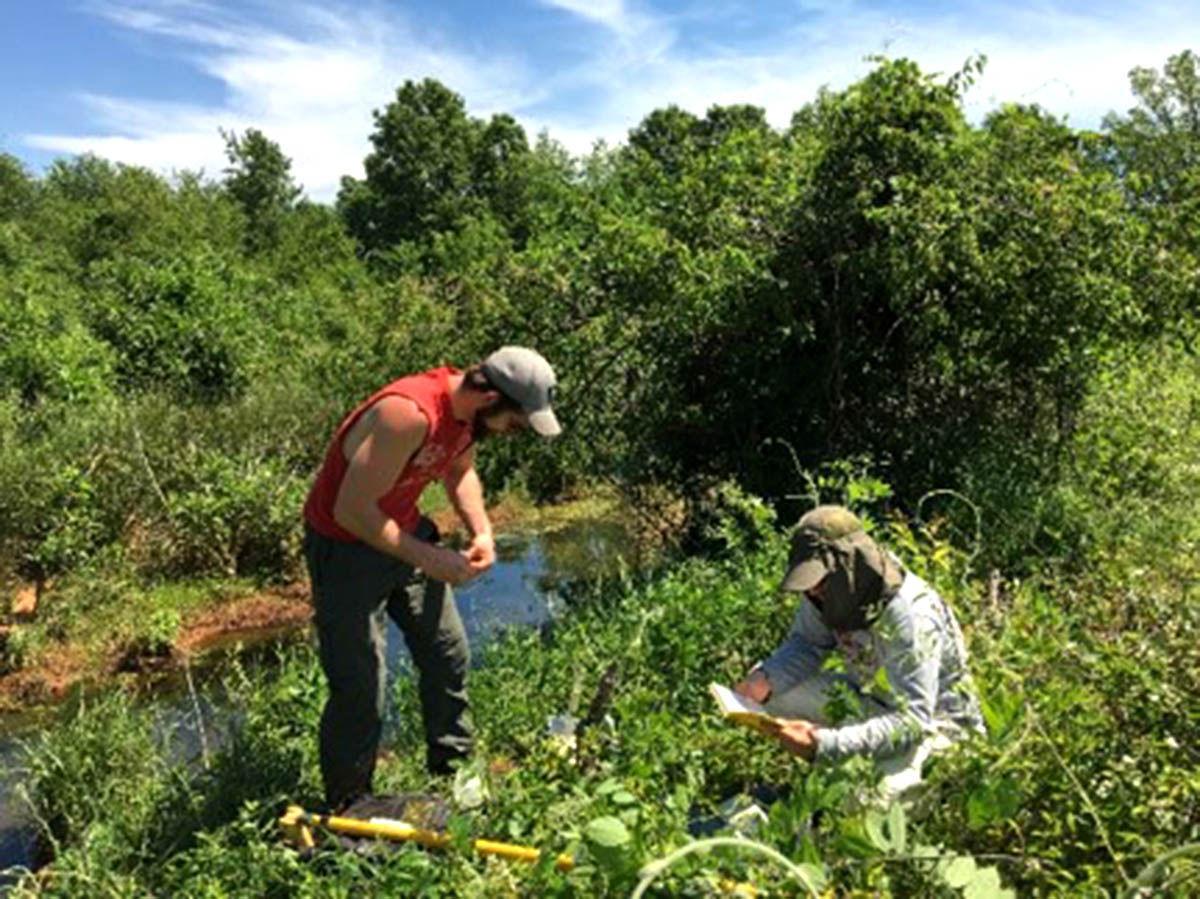 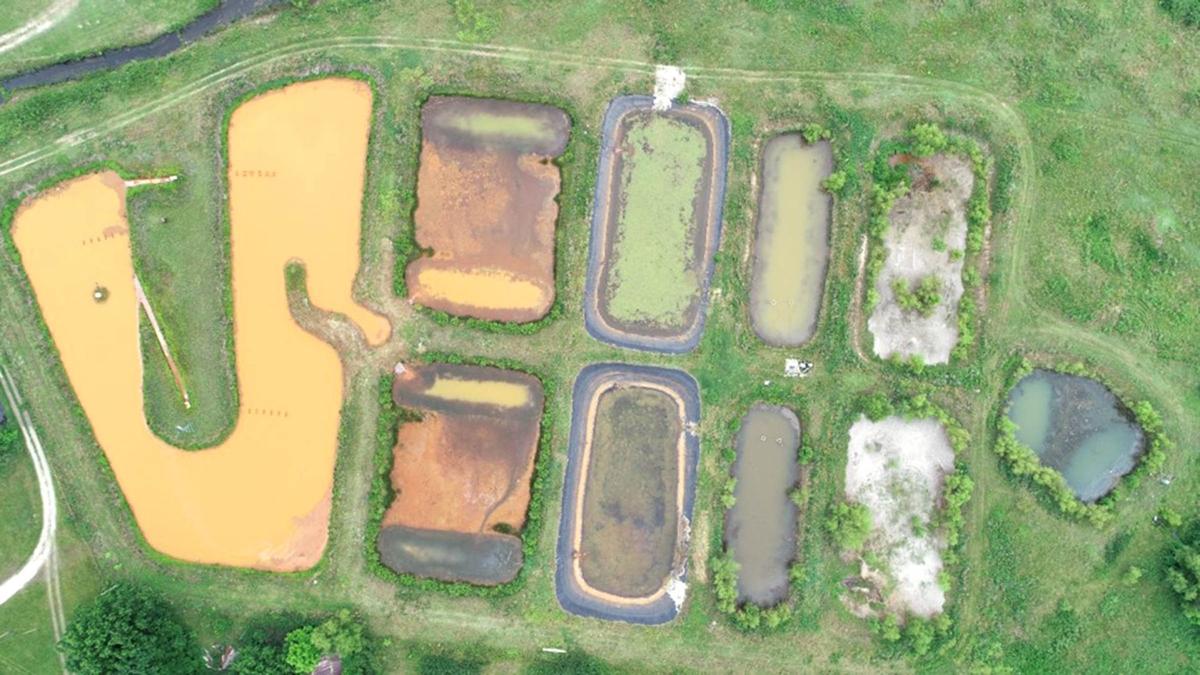 An aerial view of the Mayer Ranch passive treatment system captured by the University of Oklahoma Center for Restoration of Ecosystems and Watersheds small Unmanned Aerial System. ROBERT NAIRN/Courtesy 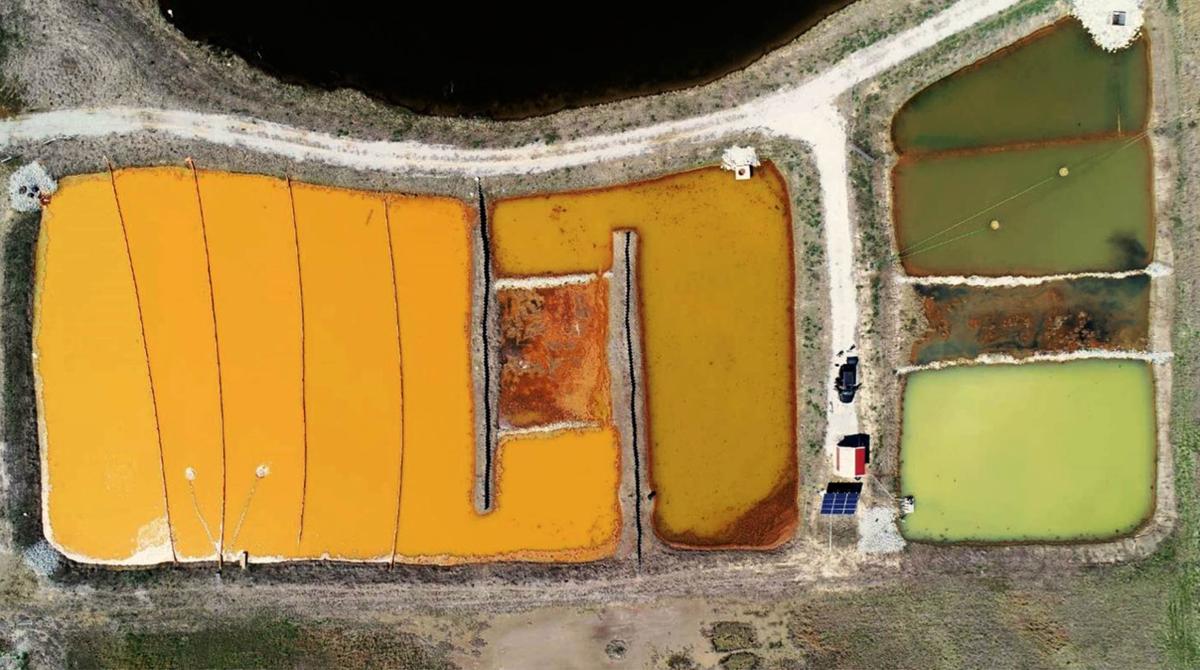 Something about the compost at J-M Farms in Miami not only makes conditions right for growing mushrooms, but the fine fungal medium can also do some heavy lifting.

For about 10 years, layers of the compost have been used to pull heavy metals — namely cadmium, lead and zinc — from contaminated water percolating up out of old mine shafts that dot the Tar Creek Superfund Site in Ottawa County.

In what is called a “passive treatment system,” some of the water from one of the most highly contaminated mine sites in the country is slowly being cleaned — and with minimal daily effort.

The system is one of several initiatives listed in the Tar Creek Superfund Site Strategic Plan issued last week by the Environmental Protection Agency, Quapaw Tribe and Oklahoma Department of Environmental Quality.

Together with students from the University of Oklahoma, professor Bob Nairn of the OU Center for Restoration of Ecosystems and Watersheds has for more than 10 years monitored the water draining from a series of ponds, where contaminated mine water is turned into a flow suitable for aquatic wildlife thanks in large part to the right kind of dirt and some natural chemistry.

“The ponds at the Mayer Ranch have been treating about 400,000 gallons a day for over a decade now,” Nairn said. “We created a second system two years ago near Commerce that treats about 150,000 a day, so we’re treating now about half a million gallons of water a day.”

Nairn and his students have maintained the site, with visits once a month, including a couple of annual visits for larger jobs such as clearing outlets plugged by beavers or, as happened last year for the first time, to stir the mulch.

The Mayer Ranch site, located between Miami and Commerce, has a system of 10 ponds that cover about 3.5 acres. The second site, closer to Commerce, has four ponds on 2.5 acres, he said.

The sites are within the old Picher Mining Field, a part of the Tri-State Mining District where, from the 1890s into the 1960s, companies mined millions of tons of lead and zinc ores. During the mining, large-capacity dewatering operations pumped thousands of gallons of water to keep the mines clear; after mining ceased, groundwater accumulated in the mines, where billions of gallons of contaminated water exist in underground voids.

Artesian groundwater continued to percolate into the mines; and by 1979, metal-rich waters were documented discharging into Tar Creek and its tributaries with high levels of zinc, lead, iron, nickel and cadmium — one of many factors left over from mining activities that make the Superfund Site one of the most highly contaminated in the country.

Nairn began sampling water at the Mayer Ranch in 1998, 10 years before construction of the first treatment system, which discharges into one of many unnamed tributaries that flow from an old mine site and into Tar Creek.

“There will be bad water coming up out of the ground there for a long time,” he said.

The magic of the treatment ponds lies with chemistry that already exists in the water but which needs a little help to clear the metals. That comes with the ponds, some of which are called “bioreactors,” he said.

Essentially, bad water flows into the ponds at the top; to exit, it must drop down through about a 3-foot thick layer of compost to reach perforated pipe that leads to the next set of ponds, Nairn said.

Microbes in the compost layers do the heavy lifting of removing the toxic metals, he said.

“Microbes need three things to function,” he said. “They need a situation where there is no oxygen, and that’s in the compost layer under about 2 or 3 feet of water; sulfate, which is already in the mine water; and they need a source of carbon.”

The magic happens when microbes interact with the sulfates and turn them into sulfides, which bind with the heavy metals and then settle out in the compost layer, he said. “The metals are elements, so they can’t be broken down,” he said. “But we are essentially sequestering them.”

Each pond has a different function, either in removing iron or removing lead and zinc. One near the end of the process is set up with a wind-operated power station to run bubblers that re-oxygenate the water, he said.

At J-M Farms, the compost begins as piles of chicken litter with wheat straw, cottonseed meal, gypsum and some urea, according to Scott Engelbrecht, growing operations manager. The materials are composted, not unlike what is done in a backyard compost pile, until it forms the soil in which the mushrooms are grown. The compost in the ponds, still the original stock laid down 10 years ago, is compost that already had been used to grow mushrooms.

It was a cruel irony last year when leakage from leach pits used in the composting process at the plant got into Tar Creek just downstream of the Mayer Ranch and killed thousands of fish. The spill was cleaned up, however, and the creek quickly recovered.

On a scale from basic manure and hay, which would be far too rich, to plain wood chips, which would not have enough substance, the mushroom compost “just had the right stuff,” Nairn said.

“It contains a lot of biodegradable carbon, which is important. It makes the microbes happy,” he said.

Nairn said the expected life of the ponds is about 20 years. Researchers did notice a decline in flow after 8.5 years at the Mayer Ranch, but that was remedied when the compost got a stir with a track hoe and the flow returned, he said.

“Basically, it was becoming compacted, and the water just wasn’t flowing through as well,” he said.

“That’s something we’re monitoring to learn before we make the next big move,” he said.

More treatment pond systems could be used on other tributaries to improve the concentrations of heavy metals flowing into Tar Creek, he said.

“One of the most exciting things is we’ve documented a tripling of the number of species of fish in the tributary from about a half dozen up to 18, and there are massive numbers more of the fish,” he said. “Beavers and muskrats have moved back into the stream, as well, although they’ve caused some minor problems for us because they like to stop things that flow.”

Near-record high temperatures will set the stage for severe weather.

Virus update: 9 charts that show how Oklahoma is coping with COVID-19

Find out how many people have been vaccinated, plus how case counts have changed over time, and more with these charts and maps.

An aerial view of the Mayer Ranch shows a passive treatment system that uses mushroom compost to sequester and filter out heavy metals from polluted water at the Tar Creek Superfund Site. ROBERT NAIRN/Courtesy

An aerial view of the Mayer Ranch passive treatment system captured by the University of Oklahoma Center for Restoration of Ecosystems and Watersheds small Unmanned Aerial System. ROBERT NAIRN/Courtesy