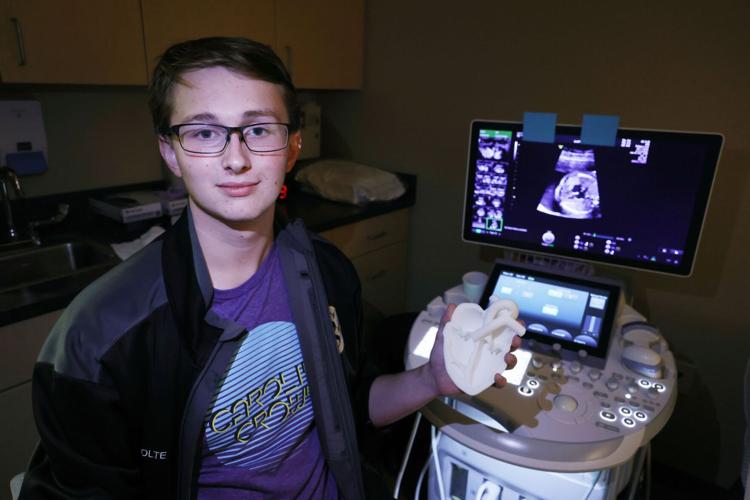 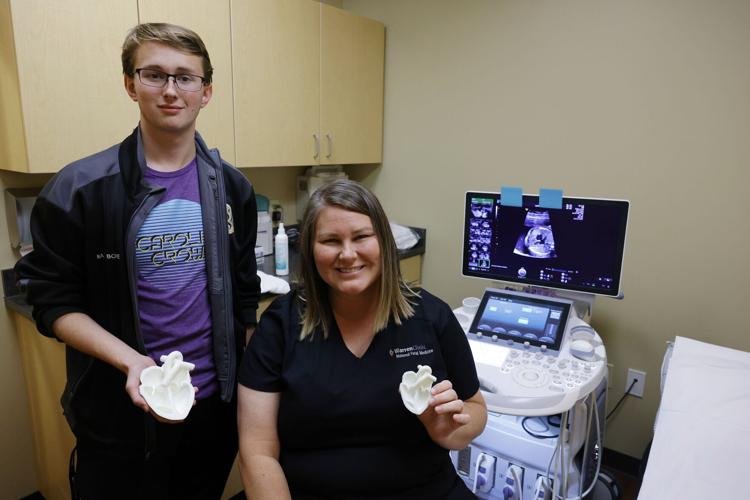 Charles Page High School senior Nate Bolte and CPHS alumna Cassie Hathaway, a sonographer at the Warren Clinic Maternal and Fetal Medicine clinic in Tulsa, show off the 3-D-printed fetal heart models Bolte made for the clinic at Hathaway’s request. 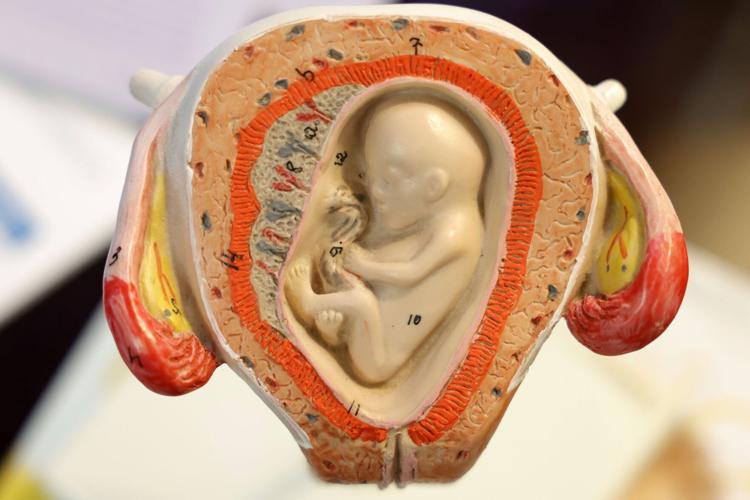 LEFT: This is a model of a fetus in the womb in use by staff members at the Warren Clinic Maternal and Fetal Medicine clinic in Tulsa to help patients understand their medical situation. Such models can be very expensive and hard to come by. 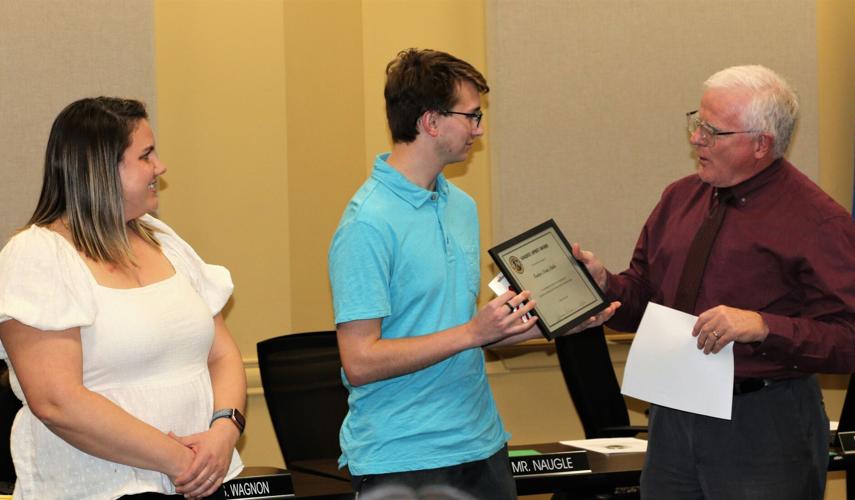 Seventeen-year-old Nate Bolte’s future might lie in the stars, but the heart he created with his hands will likely help him get there.

Bolte — a senior at Charles Page High School in Sand Springs who hopes eventually to get a Ph.D. in astrophysics or cosmology — was surprised to find himself studying the anatomical intricacies of the fetal heart, but when teacher Jessica Sprague told him she needed his help with a special project, that’s what he did.

Sprague, who teaches engineering through Sand Springs Public Schools’ Project Lead The Way program, said she got a call last fall from Cassie Hathaway, who introduced herself as a Charles Page alumna and a sonographer at the Warren Clinic Maternal and Fetal Medicine office in Tulsa.

Hathaway was wondering if Sprague might have some engineering students who could make her a model of a fetal heart. Such models can be hard to come by, and even when available, they are quite expensive.

“I had heard that Charles Page had a 3D printer awhile back, and it just dawned on me that this could be an opportunity to get something done that we might need and also partner with the community,” Hathaway said.

Sprague was immediately receptive to the idea.

“I knew we had some really talented students, and I thought maybe we could pull something together,” she said.

She pitched the plan to her engineering students and to students in the PLTW biomedical classes, but “it was kind of crickets for a while,” she said.

Bolte wasn’t in Sprague’s class last year, but Sprague met up with him in the cafeteria and told him about the project, asking if he’d be interested in being part of the team she envisioned.

Bolte “was without question — ‘Yes. I want to do that,’” Sprague recalled.

The “team” never really materialized, though.

“It was largely just me, working on it on my own whenever I had free time,” Bolte said.

But with free time being a pretty rare commodity for a busy high school boy, days and weeks turned into months.

Hathaway, meanwhile, was beginning to wonder whether her alma mater would come through for her. By summer, she assumed the project had been abandoned.

“I didn’t know who was working on it,” she said. “I thought they might have graduated.”

But then she got an email from Sprague earlier this semester informing her that the model was completed. Hathaway rushed right over to the school to collect it.

“I was so proud walking in here (the clinic) the next day,” she said.

And just like that, the project was complete; the goods delivered. But for Bolte, there was some reflection, a process that doesn’t typically accompany most school assignments.

“It was a strange experience realizing that this was, like, actually something real that I’d be doing this for — and that didn’t really hit me until the end,” he said.

“I really enjoy actually having an impact on a lot of the things I’m doing. And I like that about a lot of the classes I’ve taken.”

That said, the project was anything but simple.

Bolte did a lot of research, but much of his work was “just figuring out how to make it work in the modeling software.” The biggest hurdle was “definitely the technology itself. Getting the software itself to do what I needed it to was definitely the hardest part.”

Although software exists that would have allowed the task to be completed much more easily, Bolte said, “it would be very expensive” — prohibitively so for a high school.

Instead, he used a modeling software that students and educators have free access to called Onshape, a professional-grade CAD (computer-aided design) platform that’s largely used for mechanical structures.

“That’s why it was so hard to get an organic shape in it, because it’s very good with straight-line symmetry and things like that,” Bolte said, adding that he overcame the hurdle with “a lot of playing around.”

In other words, time. Bolte estimated that he devoted about 40 to 60 hours to the project.

Given that perspective, the 10 to 11 hours required for the 3-D printer to produce the heart model seems almost inconsequential.

But for all of the time devoted to the project, the financial investment is shockingly low. Bolte estimated that the materials that make up the model likely cost “about $5 to $10.”

Sprague, his teacher, said it was possibly even less than $5.

She did use some of her classroom budget to buy a higher-quality 3-D printer for use in the heart model project, but “it was something I knew I could use with other projects and multiple applications throughout my career.”

Compare that with the cost of the commercially available models the Maternal and Fetal Medicine clinic could have purchased — which Hathaway said would cost about $500 to $1,000 each — and the project seems like a smart investment all the way around.

For Hathaway, the model is essential, whether it’s used to help new medical residents understand the production of a two-dimensional image — an ultrasound — from a three-dimensional structure — a heart — or to communicate to physicians any issues with an organ that is the size of a quarter or even smaller.

But the model is even more critical where patients are concerned, she said.

With the model, “we can show them normal anatomy, and then we can say, ‘OK, this is where your baby’s heart isn’t quite right.’

“I just can’t even express the insane amount of gratitude I have for that,” Hathaway said. “I’m really thankful for Nate and what he’s done.”

For Bolte, the project might help him get into the college of his choice.

“For a couple of my applications, I made a portfolio of this entire project and I submitted it to them for review,” he said, adding that Harvard University and the Massachusetts Institute of Technology are his top choices.

He intends to major in physics with a focus in astronomy and then get that aforementioned Ph.D. in astrophysics or cosmology and become a research scientist.

“I didn’t really expect myself to go into much of, like, medical,” he said. “I’d never ruled that out, but it was never something I had really focused on. So it was really interesting that this was my first foray into real-life application.”

Although Bolte’s work with the fetal heart model isn’t likely to change his career aspirations, it has, perhaps, clarified them a bit.

“I’ve realized that this modeling would be something I would like to do in the future in whatever professional or hobby way I could,” he said.

The project has also clarified some things professionally for his teacher.

Sprague, who is in her 12th year as an educator and her fourth at Charles Page, said she feels like she has “finally come into the pinnacle of everything I thought the career would be: taking these boring things — math, physics — and turning them into something tangible.”

“When you give application, you can give it life.”

Sprague said that in the nearly 20 years since she graduated from high school, “I have witnessed a shift in magnitude of what schools can provide for students, and I’m just so excited to get to be a part of that.”

Bixby (11-1) advances to meet the winner of Friday night's Union-Owasso semifinal in the state title game at 7 p.m. next Friday at Central Oklahoma's Chad Richison Stadium in Edmond.

Wrecker operator, 31, killed in crash on U.S. 69 in Wagoner County

He was on the inside southbound shoulder of the highway when he was struck by a southbound Cadillac that then rolled several times, coming to rest on its top. 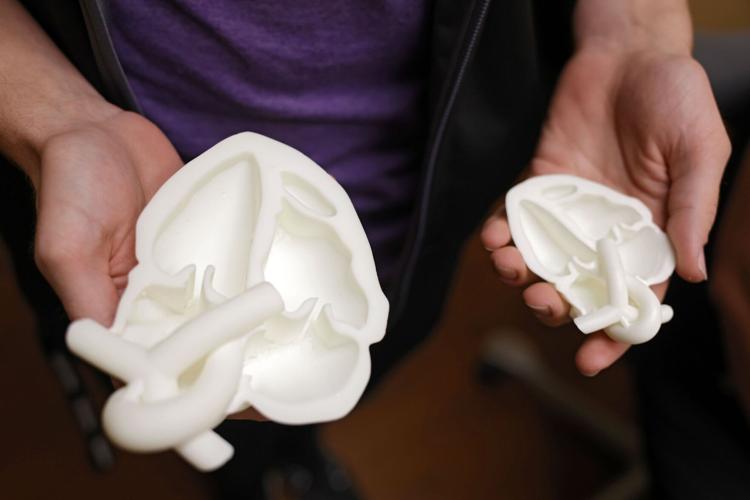 It took a 3-D printer 10 to 11 hours to produce these fetal heart models, but the materials cost less than $10.

Charles Page High School senior Nate Bolte and CPHS alumna Cassie Hathaway, a sonographer at the Warren Clinic Maternal and Fetal Medicine clinic in Tulsa, show off the 3-D-printed fetal heart models Bolte made for the clinic at Hathaway’s request.

LEFT: This is a model of a fetus in the womb in use by staff members at the Warren Clinic Maternal and Fetal Medicine clinic in Tulsa to help patients understand their medical situation. Such models can be very expensive and hard to come by.