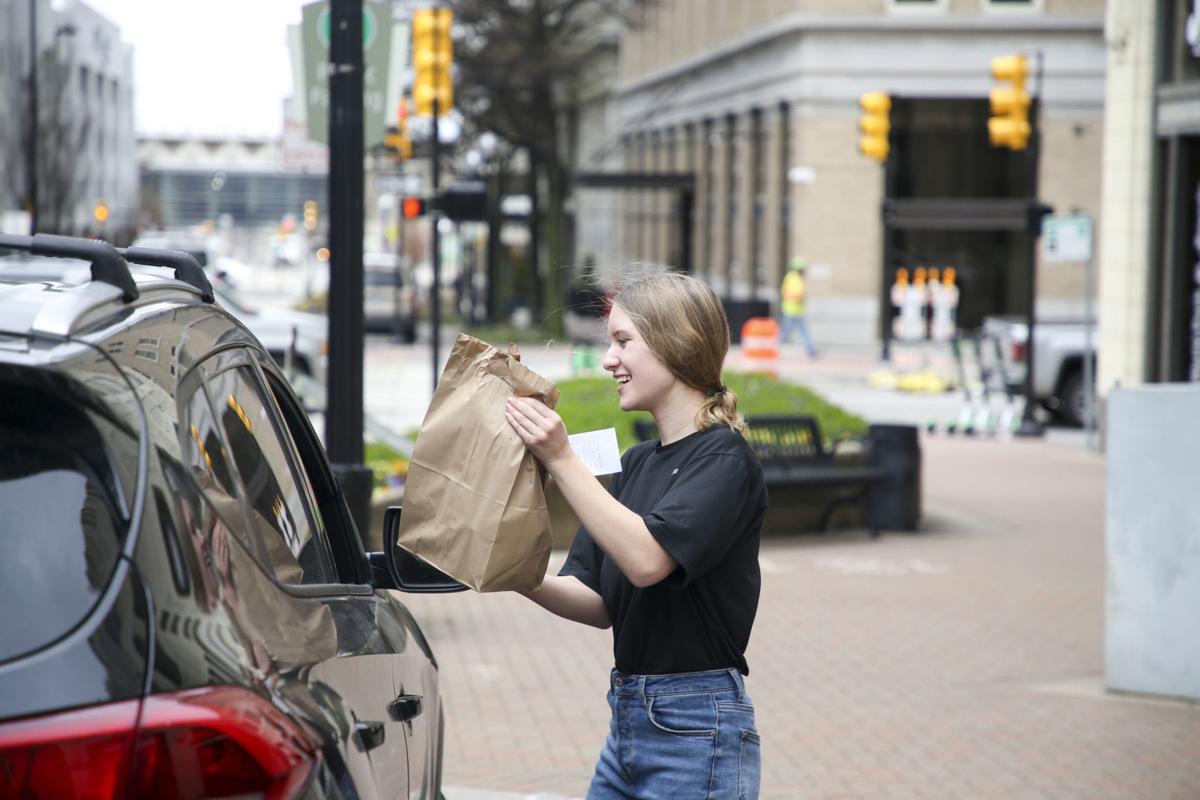 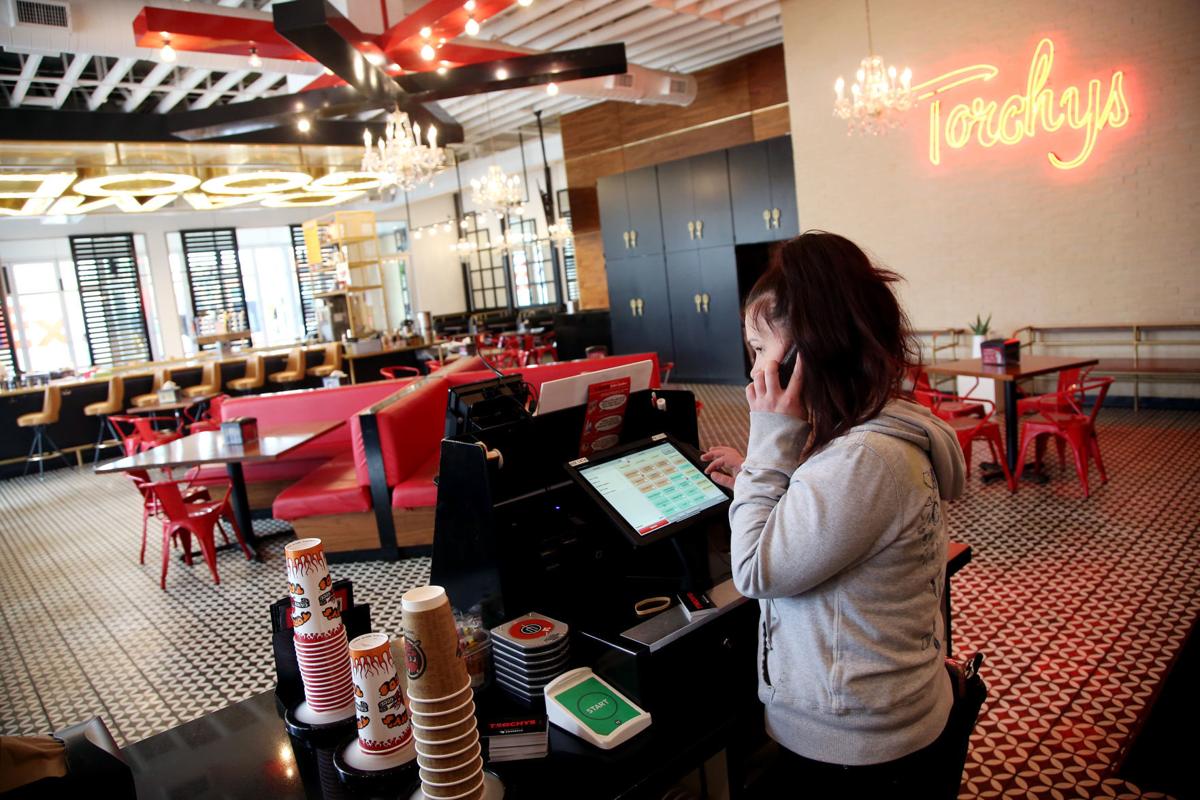 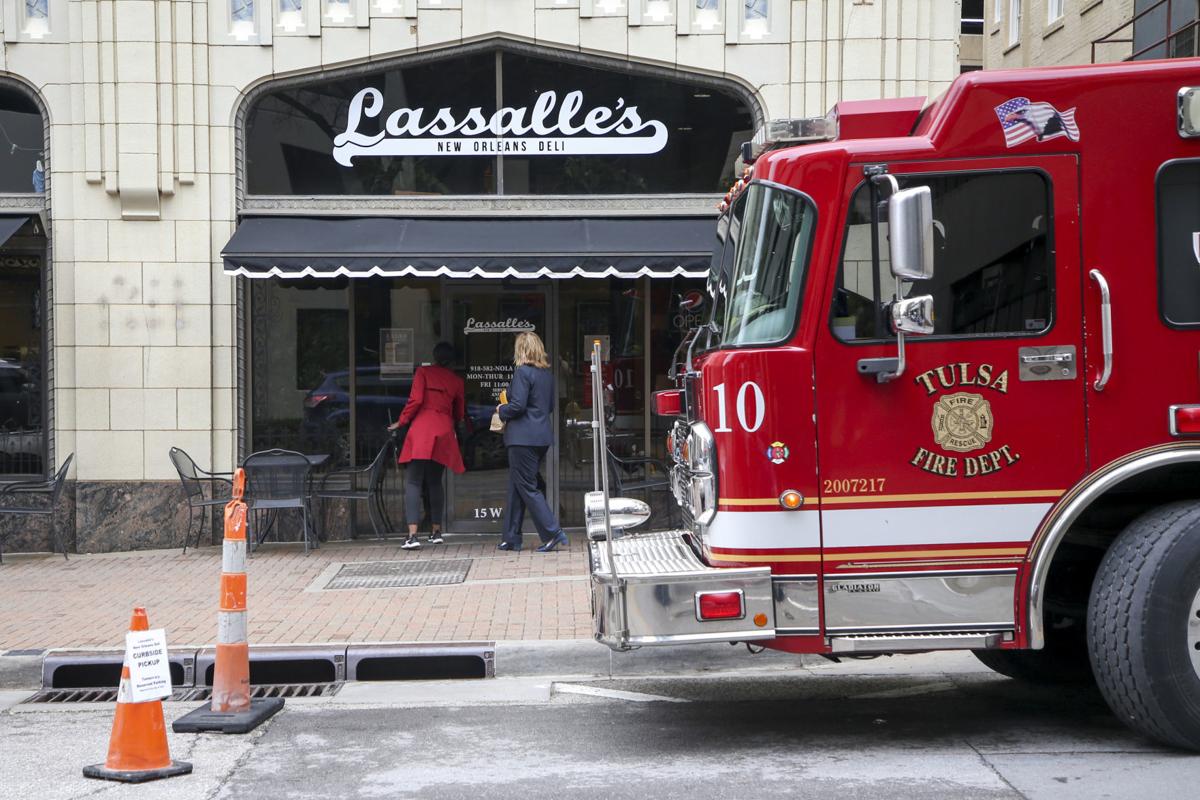 Customer’s walk into Lassalle’s New Orleans Deli while a firefighters wait in their truck for an order in downtown Tulsa on Wednesday, March 18, 2020. IAN MAULE/Tulsa World

Customer’s walk into Lassalle’s New Orleans Deli while a firefighters wait in their truck for an order in downtown Tulsa on Wednesday, March 18, 2020. IAN MAULE/Tulsa World

The big red fire truck pulled up outside Lassalle’s New Orleans Deli a little after noon Wednesday, and Capt. Tim Nelson was checking his phone for an update on his order.

Nelson had put in an order for the crew at Fire Station 10 at 508 E. Pine St. He didn’t request curbside service, but he and driver Patrick Young did remain in the truck until the order was ready.

“Sometimes we get too busy to cook at the station, and we go pick up some food,” Nelson said. “This time we wanted to support a local restaurant, and we placed the order on the Lassalle’s app.”

Since Mayor G.T. Bynum closed all bars, restaurants and entertainment venues indefinitely Tuesday because of the COVID-19 threat, restaurants have been scrambling to make plans.

Lassalle’s typically has a robust downtown lunch business, often with a line of customers to the door. On Wednesday at noon, it had only about 10 people placing to-go orders inside the restaurant and three or four waiting in their vehicles for curbside delivery.

The numbers were deceiving, according to Chris West, who owns the restaurant with wife Amanda.

“I laid off an employee yesterday and called him back in today because we are getting more business than I expected,” West said. “People are phoning in (the line constantly was busy when we tried to call), ordering off our app and using DoorDash.”

Lassalle’s is extending its hours and will be open 11 a.m. to 8 p.m. Monday-Friday.

“We could add Saturdays, but if that doesn’t happen you will find me on Saturdays helping out my friends at Mac’s Barbeque (in Skiatook),” West said.

Many restaurants are offering some combination of curbside service, delivery, inside takeout and drive-through. Many have third-party delivery services, such as Grubhub, DoorDash and Uber Eats. Some are offering their full menu, some a limited menu.

Some have shut down completely, and many have had to furlough most of their employees.

One of the hardest hit was the McNellie’s Group restaurants, which Wednesday furloughed some 570 of 800 employees.

“(We) will be converting to take-out and delivery only for the foreseeable future,” Elliot Nelson, who heads McNellie’s Group, said in a Facebook post. “Our Dust Bowls in Tulsa, Oklahoma City and Little Rock will be completely closed. We’re trying to decide if there’s a viable option for carryout at places like Bull in the Alley.

“The carryout effort is an attempt to help feed the community and preserve jobs, while also trying to generate any revenue possible to help satisfy our obligations. But if I’m being honest, I’m not sure it will be effective.

“I’m making the gut-wrenching decision to furlough the majority of our employees. We simply can’t afford to keep people on without revenue coming in. And those people who do stay are going to endure cuts to their salaries and hours that’s going to make it difficult to make ends meet. We’re planning for an unknown, and have decided maintaining health insurance for the 230 people we cover is top priority – even those who are furloughed. To make that math work, we’re forced to choose between a lot of bad options.”

Bros. Houligan has closed its original store at 2508 E. 15th St. but is offering lunch and early dinner takeout and delivery service from its location at 4848 S. Yale Ave., according to co-owner Pat McMurchy.

“The owners want the midtown community to know they are there for them,” said Don Jones, consultant to the restaurant. “In spite of the obvious challenges at hand, we have some incredibly talented, forward-thinking owners and operators in Tulsa that will band together and dare to survive to minimize the long-range impact on our industry. We have to support our local restaurants like never before.”

Some restaurants, such as DoubleShot Coffee Co., 1633 S. Boulder Ave., have adjusted their hours and offerings. DoubleShot will be open 8 a.m. to 3 p.m. every day until further notice.

“We still are open for to-go orders of all coffee drinks and pastries,” owner Brian Franklin said. “We also are here for your coffee bean and brewing needs. The DoubleShot bread program is in full swing, producing English muffins, apple butter and loaves of bread for your consumption at home.”

Angela Faughtenberry, owner of 413 Farm near Adair, is taking the unusual step of going to work gratis for one of her customers, Amelia’s Market & Brasserie, 114 N. Boston Ave.

Faughtenberry moved from Texas in 2016 to start her farm, and Amelia’s, sister restaurant to Amelia’s Market & Brasserie, was among her first customers.

“I was looking forward to feeding my community with the freshest locally grown meat and eggs I could possibly raise,” she said. “I met executive chef Kevin Snell at Amelia’s. He asked for a farm tour, and in a few days he arrived with his beautiful family. We’ve become not just business partners but great friends.

“He’s been by my side through the best growing seasons and my hardest. He brings his culinary team out every year so they can know where their food for the restaurant comes from. They’ve rolled up their sleeves and helped me load 400 bales of hay.

“We’re family, and now it’s my turn to give back. Amelia’s Market & Brasserie has had to let their staff go. Kevin is now cooking to-go meals by himself. Tonight, I’ll roll up my sleeves and work alongside him. I’ll wash dishes, cut potatoes and mop floors behind Kevin so he can rest at the end of the night.

“Tulsa, we need you. Please rally and continue to show your support by placing orders for your families. We’re better together. We’ll get through this stronger.”

Q&A: What to know about Tulsa's restaurants, bars and entertainment venues closing

What about cafes, food courts and coffee houses?

What kind of entertainment venues are affected?

How about grocery stores and convenience stores?