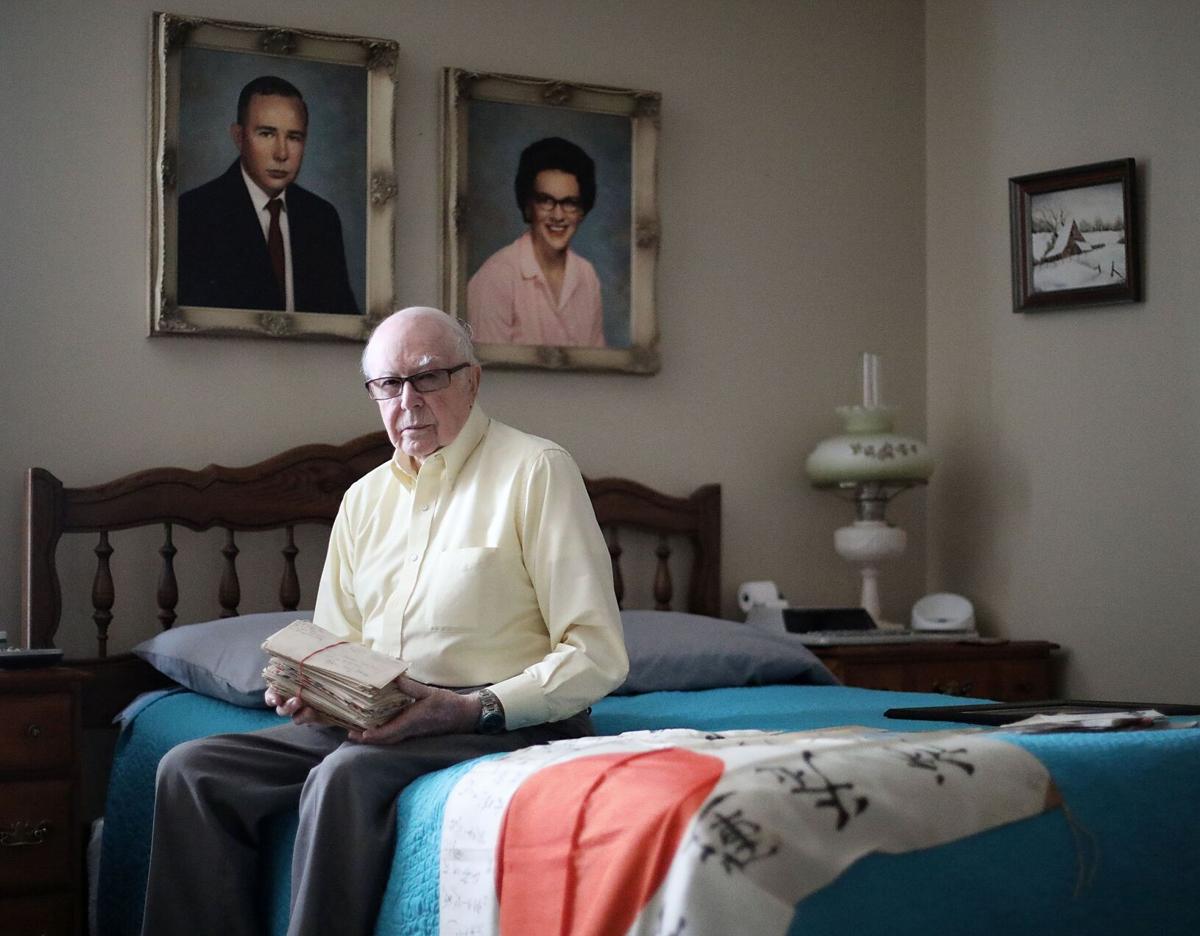 Navy veteran Bob Pope poses for a portrait with letters he wrote from Japan and a Japanese flag given to him by a Japanese friend at his Bixby home on Thursday. 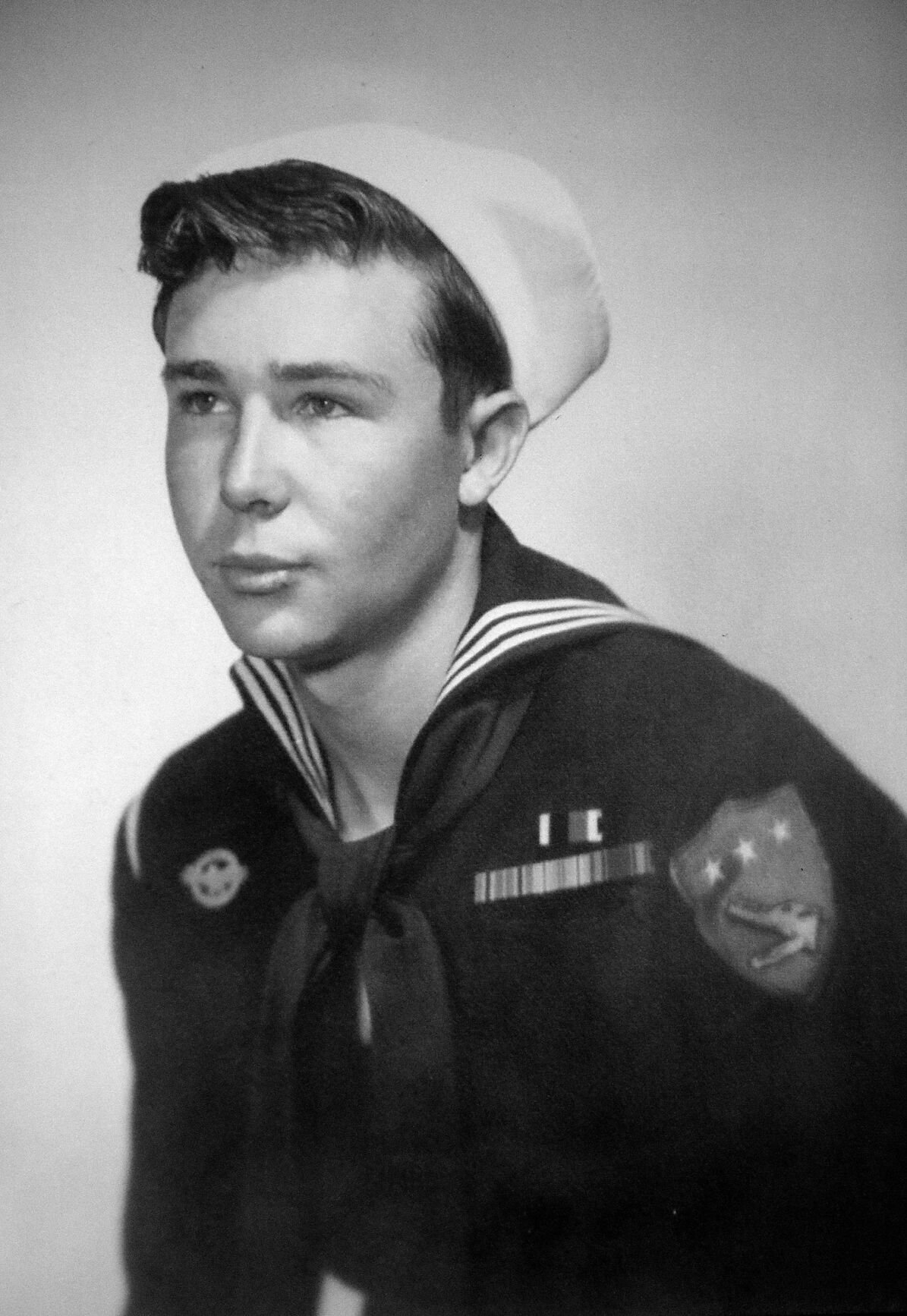 Navy Veteran Bob Pope, as seen in uniform during his time in service. 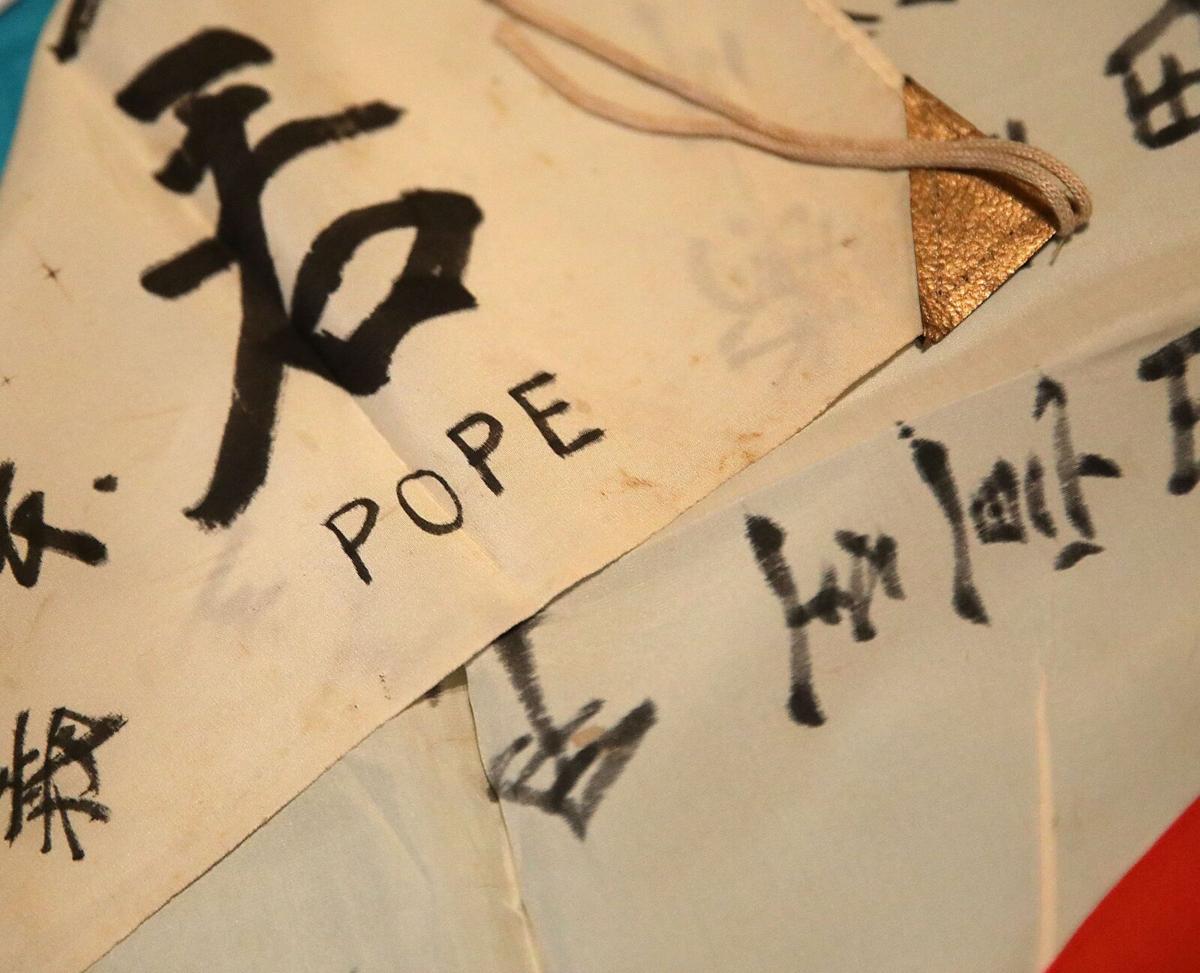 Navy veteran Bob Pope’s name was written on a Japanese flag given to him by a Japanese friend.

His first time to set foot on what had been enemy soil, Bob Pope was struck by what he saw.

Or, more accurately — what he didn’t see.

“It was deserted,” he said. “Everyone was gone.”

Alarmed at what the arrival of their American conquerors might portend, the residents of Sasebo, Japan, Pope learned, had fled to the countryside to hide.

Gradually, though, they would begin to return. And when they did, Pope again was in for a surprise.

The 18-year-old sailor from Oklahoma had expected anger, maybe even open hostility, from the Japanese. But it wasn’t like that at all, he said.

Responding to the kindness of American troops, “they would come up and bow, bow, bow. And give gifts,” Pope said.

“They were such a very humble people.”

It was the beginning of more than a year that he would spend among the Japanese as a member of occupation forces after World War II.

And it’s a time of his life that’s been on his mind a lot this month, with the world observing the 75th anniversary of the war’s end.

For many war-weary troops, Japan’s surrender in September 1945 meant they would soon be going home.

Pope, however — who had dropped out of school the previous year to join the Navy — was just arriving on the scene.

He had missed out on the fight. But he would be part of building a new future.

Pope, now 93 and living in Bixby, knows a little bit about how this year’s high school seniors must feel, watching helplessly as the global pandemic seems to alter everything.

His senior year, too, was not the experience it should have been.

In fact, he missed out on it entirely.

“Neither my mom or dad wanted it to happen,” Pope said of his decision to leave Stroud High School after his junior year and join the Navy.

But Pope, unwilling to wait until 18 and be drafted, was determined. So despite their worries, his parents consented.

The training, in California, was tough on the then-17-year-old. He didn’t like the food, the sleeping in tents or the miles and miles of marching. He got homesick.

But there was nothing to do but follow through.

After six weeks, he shipped out for the war.

While still en route, his troop ship received news of the atomic bombs, and soon after, of Japan’s surrender. The war was over.

“We’d been prepared as ‘fighting troops,’” Pope said. “But now they called us ‘occupation forces.’”

His new destination, Sasebo, was still reeling from the war.

Home to a large naval base, the city weeks earlier had been the target of a devastating bombing raid.

However, it could’ve been far worse.

When planners had been studying possible targets for the atomic bomb, Sasebo had been one of the 17 proposed.

Instead, its neighbor 30 miles to the south, Nagasaki, was ultimately selected, and was leveled in the atomic blast of Aug. 9.

Pope never traveled to Nagasaki during his time in Sasebo, but some of his comrades did.

Photos they brought back showed “a horrible sight,” he said. “It looked like a burned forest.”

As a member of the newly designated occupation force, Pope’s first few weeks in Sasebo would be spent on guard duty. Then he helped build temporary housing for Japanese civilians who’d been left homeless.

Many residents were dressed in rags. And everyone, it seemed, was hungry.

Pope said he drove a truck for a while, hauling garbage from the mess hall to the dump.

“And as we dumped that garbage, the food never hit the ground,” he said. “There were hundreds of hands there grabbing it up.”

“They were very, very poor and starving,” he said. “They had been treated so badly” by their own leaders.

“That always preyed on my mind.”

Pope’s time among the Japanese resulted in some relationships he’s never forgotten.

One of them was with an older, married couple who did his laundry.

“They were very kind, very humble,” he said, adding that he always removed his shoes when entering their home, per their traditions.

But the relationship that affected him most was with a young man whom he came to think of as a close friend.

The two were about the same age and spent a lot of time together.

The friend, whose name Pope believes was Matsuo, hoped one day to come to America.

Before Pope’s departure, his friend wrote him a letter and left it for him at his quarters.

He still has a fragment of it, written in broken English.

“He wanted to apologize to me for the Japanese starting a war with America,” Pope said.

“It was a really good letter. I wish I still had all of it.”

Pope intended to stay in touch after he left. His friend asked him to write and gave him an envelope with his address on it.

“I just never did follow through. I wish so bad I had. I feel like I let him down terribly,” Pope said, adding that he wonders if his friend is alive today.

After finishing his Navy service, Pope returned to Stroud, where he completed his final year of high school and met the girl he would go on to marry.

He and his late wife, JoAnn, would raise three children together, while he enjoyed a long career in the grocery business.

Looking back after 75 years, Pope is proud, he said, to have played a part in the rebuilding of Japan and planting the seeds for the long friendship between the two nations that followed.

For American troops who’d survived the brutal fighting in the Pacific, many would harbor a deep and lasting resentment toward their former enemy.

But he believes it was different for occupying forces.

“I don’t recall any anger at all,” he said of their feelings toward Japanese civilians.

“I think we were all just glad the war was over and we were ready to make new friends.”

Navy veteran Bob Pope poses for a portrait with letters he wrote from Japan and a Japanese flag given to him by a Japanese friend at his Bixby home on Thursday.

Navy Veteran Bob Pope, as seen in uniform during his time in service.

Navy veteran Bob Pope’s name was written on a Japanese flag given to him by a Japanese friend.