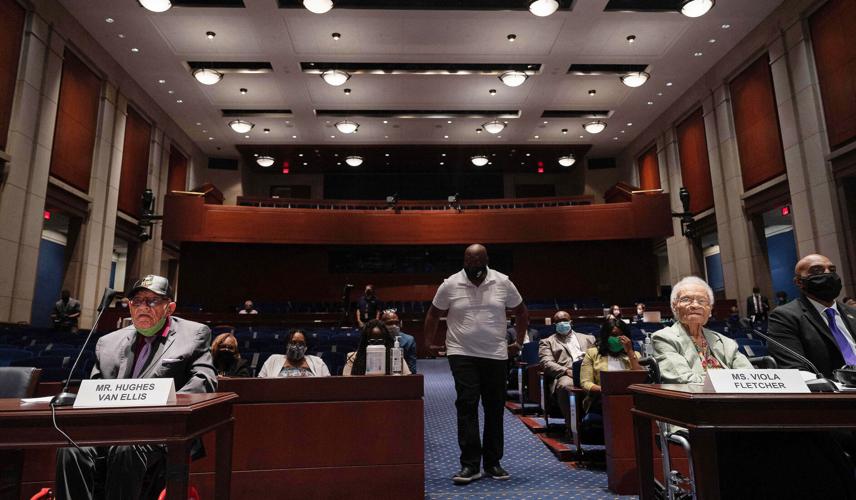 Hughes Van Ellis (left), a Tulsa Race Massacre survivor and World War II veteran, and his sister Viola Fletcher (second from right), the oldest living survivor of the massacre, testify before the Civil Rights and Civil Liberties Subcommittee hearing on “Continuing Injustice: The Centennial of the Tulsa-Greenwood Race Massacre” on Capitol Hill in Washington on Wednesday. 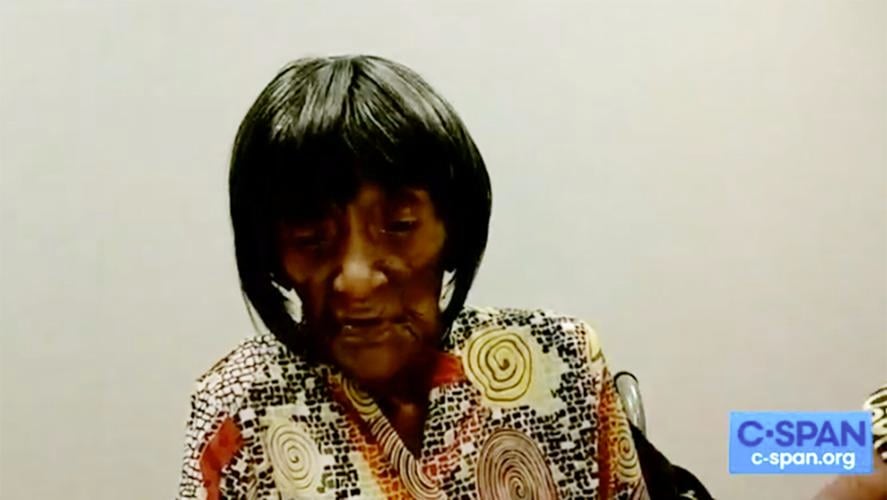 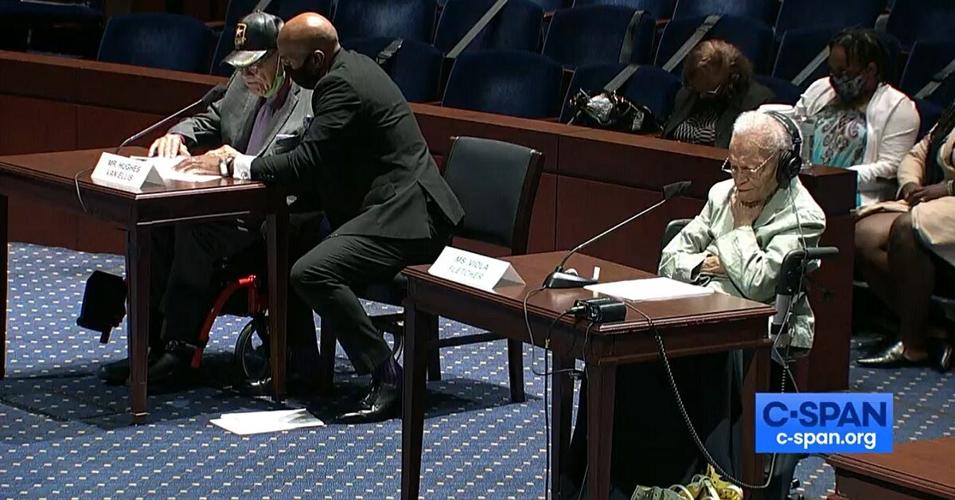 Hughes Van Ellis (left), 100, and his sister, Viola Fletcher (right), who just turned 107, testify during a Congressional hearing on the Tulsa Race Massacre on Wednesday. Both are race massacre survivors.

One of the last known survivors of the 1921 Tulsa Race Massacre told national lawmakers Wednesday that, 100 years later, she can “still smell the smoke” and “hear the screams” from the night her family fled Tulsa and invading white mobs.

“I was awakened by my family. My parents and five siblings were there. I was told we had to leave, and that was it,” said 107-year-old Viola Fletcher.

“I have lived through the massacre every day. … I will never forget.”

Fletcher, of Bartlesville, was in Washington, D.C., for a House Judiciary Subcommittee hearing discussing the massacre’s legacy and the possibility of compensation for survivors and descendants.

She was joined for the hearing by the two other last known massacre survivors. Fletcher’s brother, Hughes Van Ellis, 100, of Aurora, Colorado, was there in person. Tulsan Lessie Randle, 106, testified virtually.

The trio are among the plaintiffs in a recently filed state lawsuit seeking reparations for the massacre.

“By the grace of God, I am still here,” said Randle, who read a statement to the committee. “I have survived to tell this story. I believe that I am still here to share it with you. Please give me, my family and my community some justice.”

It wasn’t the first time this week the massacre, which will mark its centennial May 31-June 1, has received attention on Capitol Hill. On Monday, Rep. Sheila Jackson Lee of Texas and other members of the Congressional Black Caucus commemorated the upcoming centennial on the House floor. Jackson Lee also spoke at the hearing on Wednesday.

Rep. Jerrold Nadler, Judiciary Committee chairman, noted that he was chairman at the last massacre-related hearing there in 2007.

“I’ve said so before and I’ll say it again,” Nadler said. “The Tulsa Greenwood massacre can be described as an act of ethnic cleansing, which was subsequently wiped from the history books for many decades.”

In addition to ensuring the history is never lost again, he added, “this hearing is another opportunity to consider the massacre’s long-lasting repercussions for the survivors, their descendants and the greater Black community and what role Congress can play in remedying this historic injustice.”

The House Judiciary Subcommittee on the Constitution, Civil Rights, and Civil Liberties has jurisdiction over setting up compensation funds, officials said. It recently reauthorized the 911 Victim Compensation Fund, which has been suggested as a model for compensating Tulsa massacre claimants.

Damario Solomon-Simmons, lead attorney in the state reparations lawsuit, also addressed the committee in person. “You heard from my clients who I have the great honor to serve as lead counsel — these three wonderful, amazing people,” he said.

Despite a hard full day of travel and not reaching their hotel until after midnight, Fletcher never complained, he said. “She said ‘I’ve got to be here. I want to see justice.’”

Solomon-Simmons added: “I am coming to you in the name of my community, my people, my clients asking that you do for us what this Congress has done for the Japanese internment victims, has done for the 911 terrorist victims. We’re asking to be treated as full human beings”

State Rep. Regina Goodwin addressed the committee virtually. “Reparations are due; restitution is due,” she said. “We’ve got three great examples staring us in the face, crying out for justice. All we have to do is answer.”

Fletcher, who turned 107 May 10, was the first to speak. She read from prepared remarks.

“Most of my life I was a domestic worker serving white families. I never made much money. To this day I can barely afford my everyday needs.”

She added: “I’m asking my country to acknowledge what happened in Tulsa in 1921, what has happened to me, the traumas and the pain, the loss.

“This committee has the power to lead us down a better path.”

View the full hearing at: youtube.com/watch?v=SM3evloMtAA.

In 1921, white mobs invaded Greenwood and burned it down

A growing but divided city had tensions rising. How World War I influenced residents.

Greenwood was defined by freedom and opportunity

An encounter on an elevator and concerns about a lynching

Dick Rowland's life threatened while jailed as crowd gathers outside

Tulsans take up arms and there are issues with special deputies

Fighting begins in Greenwood and the neighborhood is soon overrun

Airplanes flew over Greenwood as it was attacked

Dr. A.C. Jackson was killed as he tried to surrender in his front yard

Key locations in Tulsa during the 1921 Race Massacre

Mount Zion Baptist Church was burned down but, like Greenwood, persevered and rebuilt

Tulsa Race Massacre: Quotes from survivors, officials and others

"The first time Americans were terrorized by an aerial assault was not Pearl Harbor," a CBS News story says leading up to coverage this weekend of the 1921 Tulsa Race Massacre.

"Scott Pelley reports on a race massacre in which an estimated 300 people, mostly African American men, women and children, were killed, and aircraft were used to drop incendiary devices on a black neighborhood in Tulsa, Oklahoma. The Greenwood Massacre of 1921 has been largely ignored by history, but Pelley finds a Tulsa community seeking to shed more light on what's been called the worst race massacre in history," a preview reads for a "60 Minutes" story airing 6 p.m. Sunday on CBS.

Context for viewers: Six airplanes circled the Greenwood area during the morning hours of June 1.

What they were doing, and why there were so many, has long been a matter of passionate debate. Many people believe they were used to shoot at people on the ground and bomb Greenwood.

Officials said the small craft, generally thought to be two-seat, single-engine Curtis “Jenny” biplanes, were merely keeping track of activities on the ground and relaying the information through written messages dropped in weighted metal cylinders attached to streamers.

To what extent this explanation was initially challenged is unclear, but in October 1921 the Chicago Defender published a story in which it said Greenwood had been bombed under orders of “prominent city officials.”

The story cited a Van B. Hurley, who the newspaper said had given a signed statement to Elisha Scott, a Kansas attorney.

Scott filed dozens of lawsuits on behalf of victims but doesn’t seem to have ever entered the Hurley affidavit into the record. There is no record of a Van B. Hurley living in Tulsa around the time of the massacre or that anyone by that name ever belonged to the Tulsa police force.

But that doesn’t mean the story did not have substance. Many people believed city officials were behind the burning of Greenwood, and the explanation that the squadron of planes was only used for surveillance struck some as suspiciously thin.

Certainly the planes had a great psychological impact on many. For example, Mary Jones Parrish wrote about them in her account, as did prominent attorney B.C. Franklin in his.

The Defender story said the planes dropped “nitroglycerin on buildings, setting them afire.”

But nitroglycerin is an explosive, not an incendiary. It is also highly unstable and dangerous.

That has caused some to speculate that something like Molotov cocktails might have been used, or “turpentine balls” — rags soaked in flammable liquid and wrapped around the head of a stick.

There are several practical reasons why trying to light and throw incendiary devices from an open cockpit airplane of that era would seem a difficult, dangerous and even foolish idea.

But that doesn’t mean it wasn’t done.

The moment the Chinese spy balloon was shot down, ordered by President Biden

The moment the Chinese spy balloon was shot down, ordered by President Biden

Hughes Van Ellis (left), a Tulsa Race Massacre survivor and World War II veteran, and his sister Viola Fletcher (second from right), the oldest living survivor of the massacre, testify before the Civil Rights and Civil Liberties Subcommittee hearing on “Continuing Injustice: The Centennial of the Tulsa-Greenwood Race Massacre” on Capitol Hill in Washington on Wednesday.

Hughes Van Ellis (left), 100, and his sister, Viola Fletcher (right), who just turned 107, testify during a Congressional hearing on the Tulsa Race Massacre on Wednesday. Both are race massacre survivors.