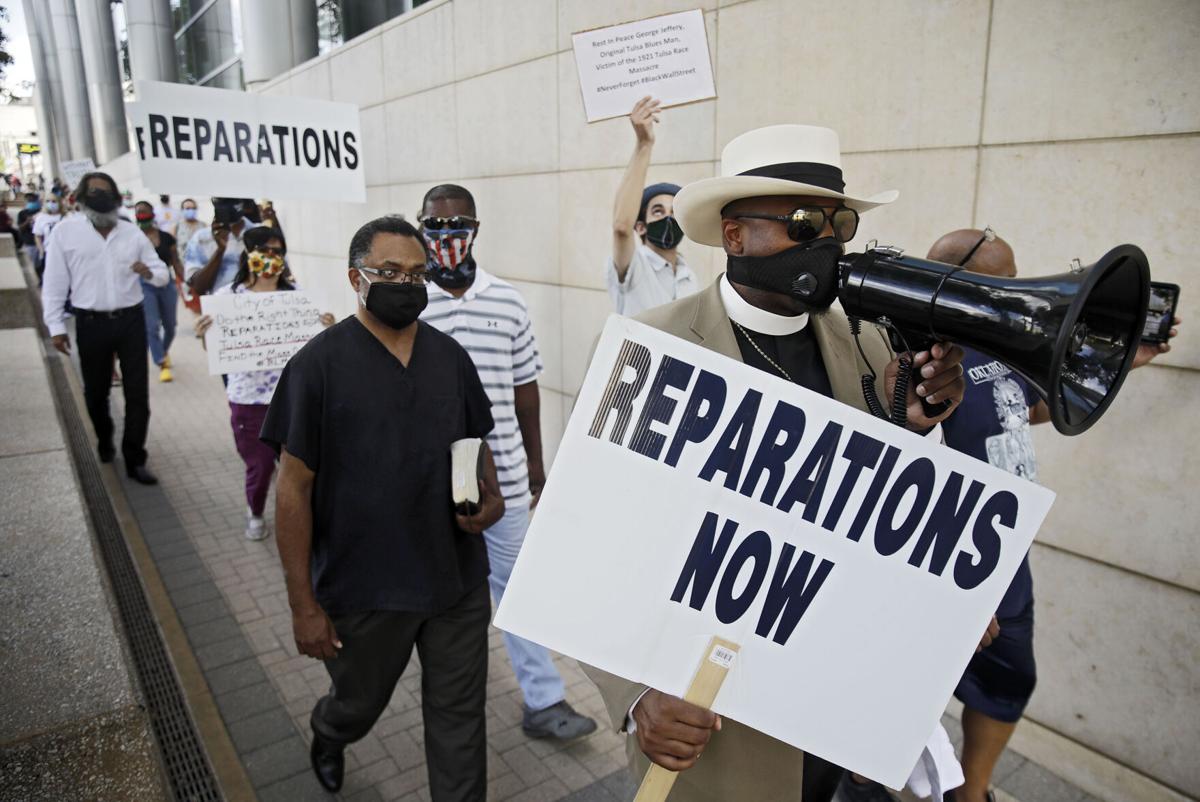 Rev. Robert Turner (right) leads a group past City Hall in one of Turner's weekly protests at City Hall for reparations for the 1921 Tulsa Race Massacre. 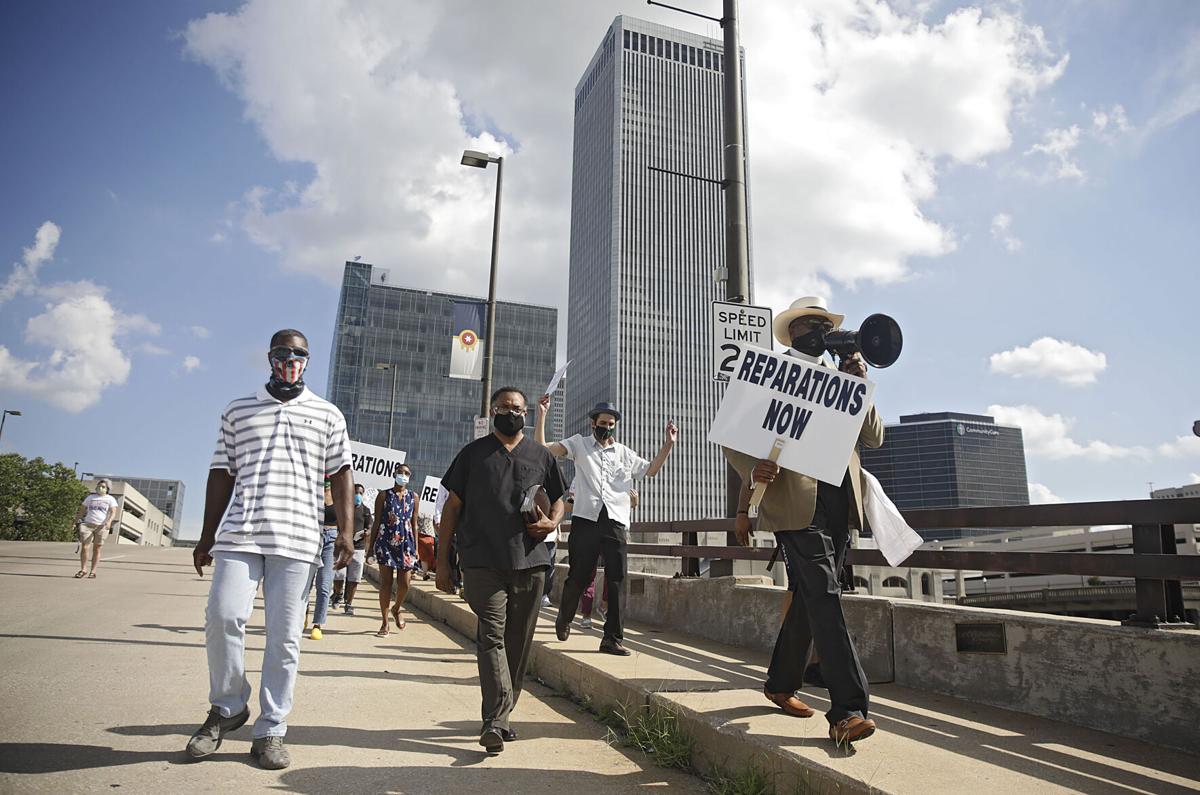 Rev. Robert Turner (right) leads a group to Vernon AME Church in July after one of Turner's weekly protests at City Hall for reparations for the 1921 Tulsa Race Massacre.

Last week’s appearance of Tulsa-based reparations advocates before a congressional committee was the latest episode in a long-running discussion about who owes what to whom from the 1921 Race Massacre.

Just the word reparations — the making of amends — can stir emotions, and even those who favor them for harm inflicted by the massacre disagree on how best to make those amends all these years later.

Some give high priority to direct payments to the few remaining survivors and the families of those affected by the massacre. Others think this impractical and perhaps not even the most equitable outcome at this point.

They speak more in terms of community-based answers to discrepancies in household wealth and well-being, policing and education.

These differences on reparations seem to be less about one or the other and more about disagreements on what is more likely to succeed, both politically and economically.

“The questions to ask are ‘What’s appropriate?’ and ‘What’s more likely to succeed?’” said Hannibal Johnson, a Tulsa lawyer, historian and author who is working with the Greenwood Rising history center scheduled for opening in a few weeks.

Johnson is among those who think the political and legal obstacles to significant cash payments makes them unlikely. He isn’t against them, he says, he just thinks trying to leverage the Greenwood story and the race massacre centennial against current problems such as housing, small business assistance and diversity is more likely to impact Tulsa, and especially Black Tulsa.

“It’s not that (cash reparations) can’t be done,” he said, “it’s that it’s really difficult, and to imply otherwise is misleading.”

Another argument, though, is that true reparations and reconciliation require direct cash restitution to those damaged, and that cash payments are a lot more definite than vague-sounding programs and promises to do better.

Damario Solomon-Simmons, a Tulsa attorney representing the three centenarian survivors who appeared in Washington last week, has sued the city, county, state, Tulsa Regional Chamber and other entities for restitution. The lawsuit asks for cash payments and other forms of reparations, including several similar to those sought by the 1921 Race Massacre Centennial Commission.

The lawsuit cites the massacre and what Solomon-Simmons, speaking to a congressional hearing, called “a policy violence that continues to this day.”

While Solomon-Simmons complains about the $30 million the centennial commission has raised for the Greenwood Rising history center and other initiatives, a nonprofit he organized last year, Justice for Greenwood, is also soliciting donations in the name of the massacre and the three survivors.

That money, says Justice for Greenwood, supports “holistic reparatory justice to the Massacre survivors and descendants and ... fighting to get them the respect, reparations, and repair they so richly deserve.”

The commission says Black businesses in the vicinity, including across the street, from what remains of the historic Greenwood business district, are already seeing an uptick.

Solomon-Simmons did not respond to requests to be interviewed for this story.

Meanwhile, Tulsa Metropolitan Ministries and All Souls Unitarian Church are trying to raise $100,000 in private funds for both direct payments and other forms of reparations.

The fight has been ongoing

None of this is new.

One day after the destruction of the all-Black Greenwood District on June 1, 1921, a meeting of white business and civic leaders chose former mayor L.J. Martin to lead what the Tulsa Tribune called a reconstruction committee.

“The city and county is legally responsible for every dollar of the damage that has been done,” Martin said, according to the Tribune.

The New York Times quoted Martin as saying, “Tulsa can only redeem herself … by complete restitution and rehabilitation of the destroyed black belt.”

That never really happened. To be sure, Greenwood rebuilt and grew larger than before. There is evidence that some whites helped some Blacks get back on their feet. The city and county spent $100,000 on relief through the Red Cross, which also collected about $30,000 in private donations. All of that, though, seems to have been spent on immediate needs, not reconstruction.

Black Tulsans had to do that almost entirely on their own.

Martin’s admonition was soon forgotten, and after hundreds of lawsuits by Black and white property owners failed, the issue appeared dead.

The concept of reparations had been slowly gaining acceptance since World War II. Germany is believed to have paid Jewish survivors of the Holocaust as much as $90 billion, beginning in 1951.

Closer to home, the U.S. government paid American Indians $1.3 billion between 1946 and 1978 for land seized without compensation, and in 1988 it paid Japanese-Americans interned during World War II $1.6 billion.

Then, in 1994, the state of Florida agreed to pay a total of $2.1 million to survivors and descendants of property owners from the 1923 Rosewood race war.

The Tulsa Commission, in a 2001 report, recommended cash payments in its list of reparations, but acknowledged the Legislature had little interest in paying them.

A private group, led by what was then the Tulsa Metropolitan Chamber of Commerce, began raising money for that purpose, but that ended with a 2003 lawsuit by attorneys arguing the statute of limitations should not apply in this case.

The lawsuit, like all those before it, failed. Ultimately a fund started by the Unitarian-Universalist church paid survivors a small amount.

Estimates of the damage in 1921 vary, but were easily in the many tens of millions of dollars by today’s values. Reparations for property damage and deaths are usually thought of in terms of Black victims, but whites also sued for damages in 1921 and at least 12 white men were killed — all of which could become an issue going forward.

Other obvious obstacles include establishing identity and residency of claimants and deciding how any cash reparations would be distributed. Would the family of, say, Jim Cherry, who reportedly lost property valued at $50,000 in 1921, receive the same as Green Smith, a Muskogee carpenter in Tulsa for the day, who was robbed of $50?

Statutes of limitations are the biggest obstacle to reparations lawsuits. In most cases, civil suits must be filed within two or three years of the event in question. Some argue time limits should not apply to reparations because claimants’ judicial options were likely limited, but to date the limits remain intact — especially for cases in which all key witnesses are long deceased.

Mayor G.T. Bynum made searching for remains of race massacre victims a priority and has generally voiced support for addressing equity issues, but says he does not support direct payments as a form of reparations.

“The problem is, where does the cash come from?” Bynum said. “The most commonly mentioned way is some sort of legal judgment that would be paid from the city’s sinking fund. That raises property taxes for everybody.”

Bynum said he prefers addressing inequality documented in reports compiled every year during his administration.

“We have shifted our economic strategy to north Tulsa,” he said. “There is over $1 billion of new investment there during this administration.”

Bynum said he is fine with privately raised money going for direct payments, but said, “Direct cash payments do not solve problems of inequity in this city.”

Skeptics, though, say that investment and change of focus has mainly benefited non-Black businessmen and women and is eroding what remains of the old Greenwood. ONEOK Field, new construction on North Elgin Avenue and the Oklahoma State University-Tulsa campus were all once in the heart of Tulsa’s Black community.

For Rev. Robert Turner of Vernon AME Church, the question is pretty simple.

“Politics always asks, ‘Do I have enough votes?’ The courts always ask, ‘Is it legal?’ Morality simply asks, ‘Is it right?’ said Turner, who holds a weekly reparations vigil outside city hall, during a recent program on reparations at All Souls.

The $18.6 million facility had originally been scheduled to reopen Saturday, but the target date has now moved to Aug. 4.

Watch now: Oaklawn search ends with exhumation of 19 sets of remains; at least one bears signs of violence

That set, of a Black male, bore the marks of multiple bullet wounds. The remains were found among a row of children's graves, but buried much deeper, said state Archeologist Kary Stackelbeck.

Rev. Robert Turner (right) leads a group past City Hall in one of Turner's weekly protests at City Hall for reparations for the 1921 Tulsa Race Massacre.

Rev. Robert Turner (right) leads a group to Vernon AME Church in July after one of Turner's weekly protests at City Hall for reparations for the 1921 Tulsa Race Massacre. 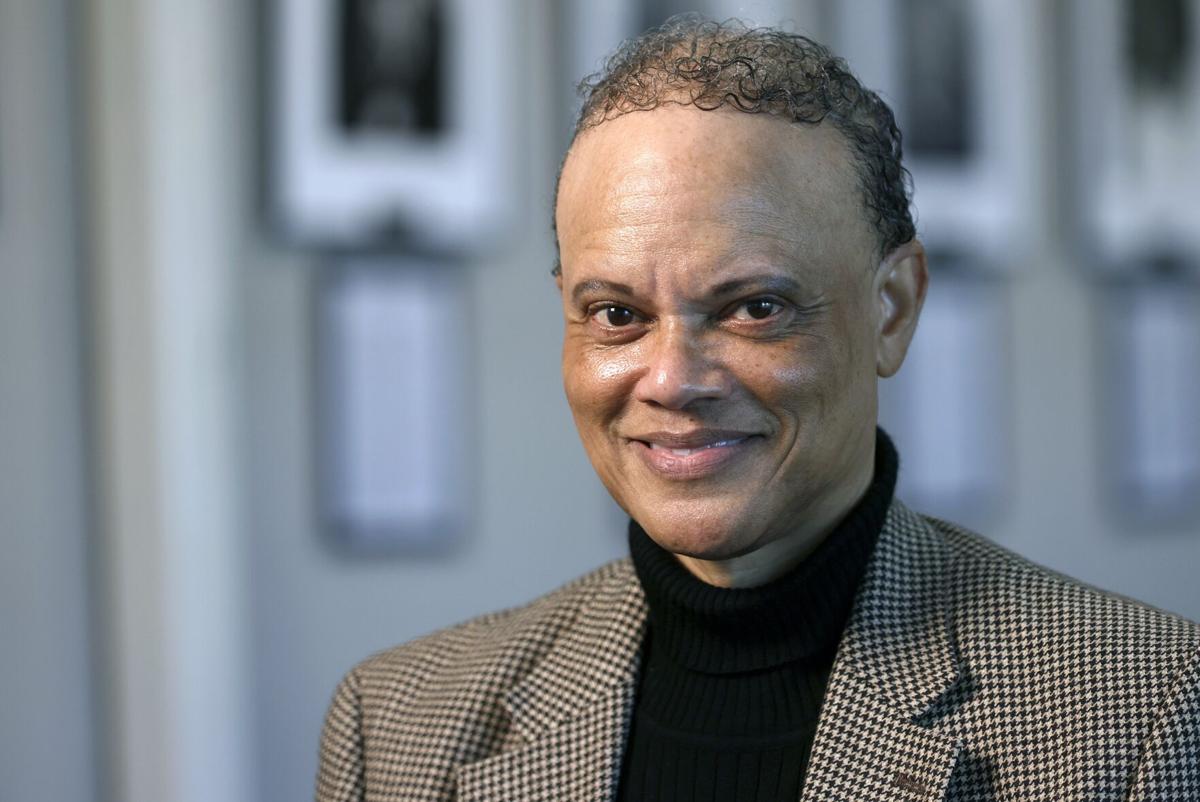 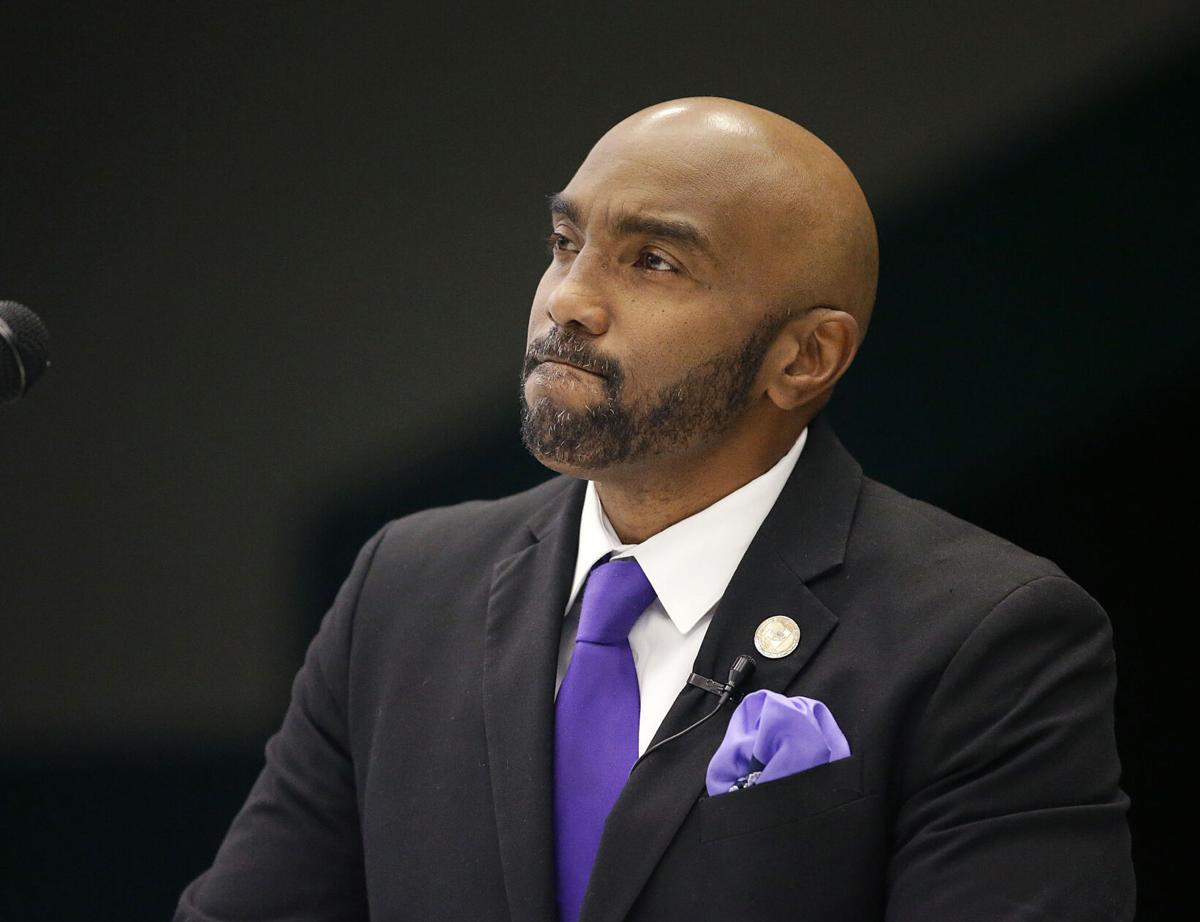