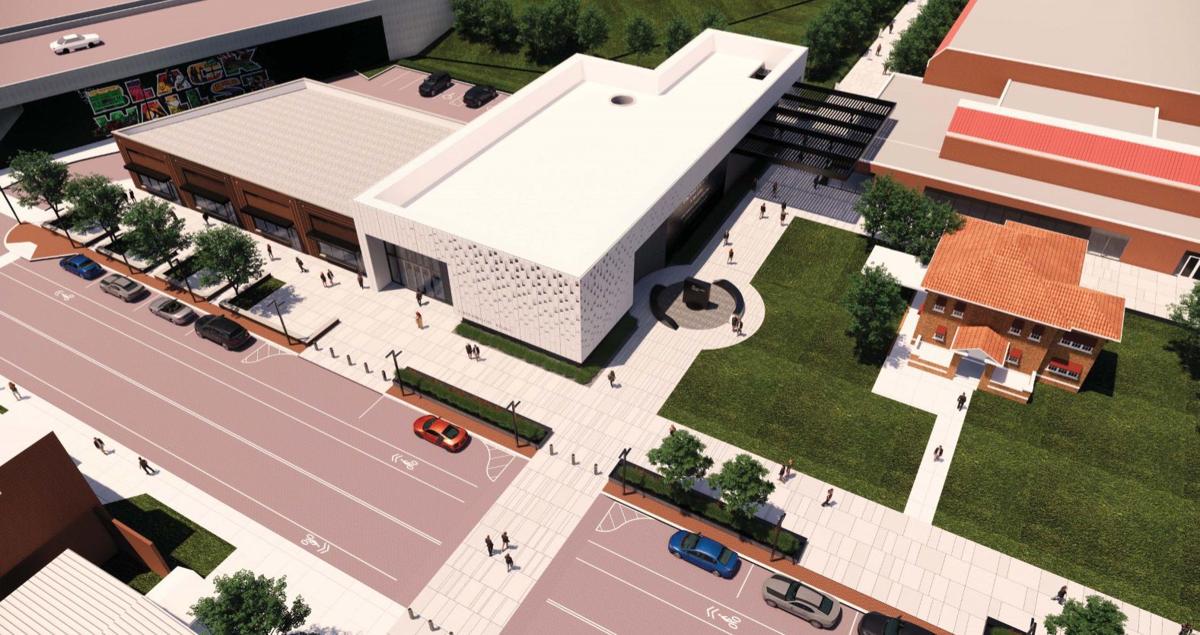 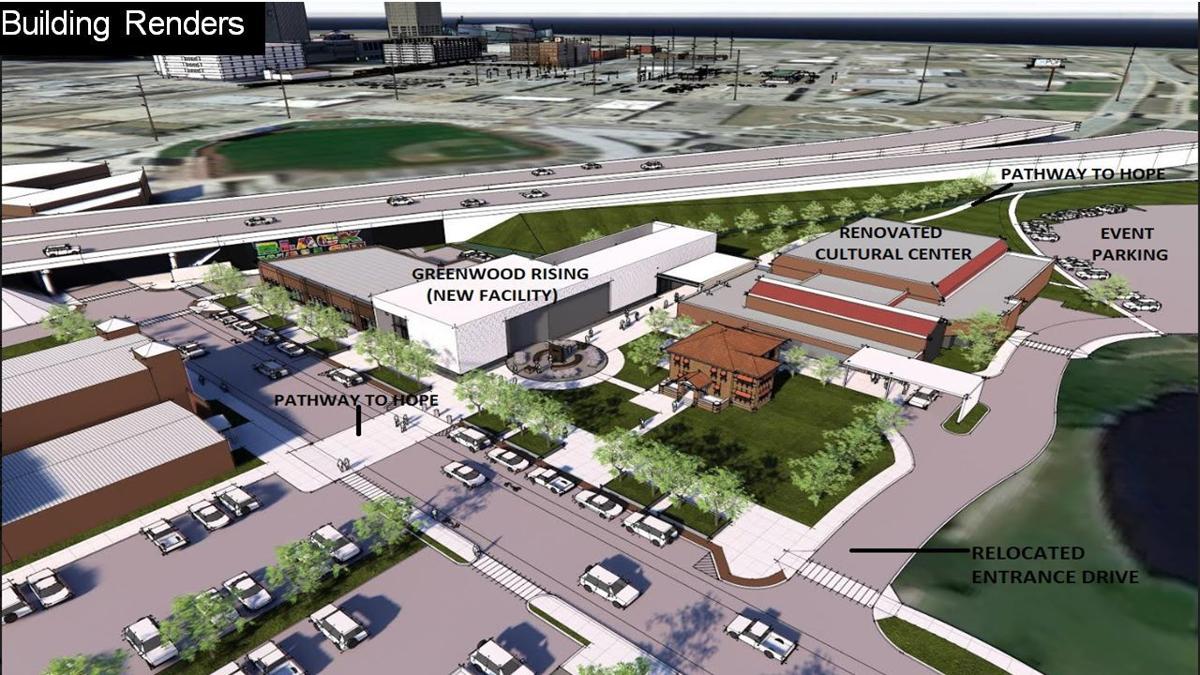 This conceptual design rendering shows the layout of proposed developments tied to the 1921 Tulsa Race Massacre centennial commemoration. The projects include the construction of Greenwood Rising History Center, a Pathway to Hope and the renovation of Greenwood Cultural Center. Thirty million dollars in public and private dollars are being raised to fund the projects. Renderings courtesy of Selser Schaefer Architects

The Greenwood Rising History Center building is expected to be completed in time for the 1921 Tulsa Race Massacre centennial commemoration next May but won’t be operational until June 2021, the project’s director said Monday.

“Once you have the building in place, then you get into the interior design and the exhibits,” said Phil Armstrong. “But having a building in place and celebrating Greenwood Rising, it’s an aggressive timeline, but it is doable.”

The history center is one of three major projects planned in the Greenwood District to commemorate the centennial of the 1921 Tulsa Race Massacre. The others are the renovation of the Greenwood Cultural Center and the construction of a Pathway to Hope.

The 1921 Race Massacre Centennial Commission, the John Hope Franklin Center of Reconciliation and the Greenwood Cultural Center are working together to plan and construct the projects.

Construction of the Greenwood Rising History Center has been held up for a couple of months as the city and the Greenwood Cultural Center board of directors worked on a sublease that would allow the 1921 Tulsa Race Massacre Centennial Commission to build the history center on the cultural center property.

Armstrong said the biggest challenge in those talks has been to assure all parties involved that the cultural center would not lose its voice and historical significance when the history center is built next door.

Among the specific concerns voiced by the Greenwood Cultural Center board were that the city ensure that the facility’s name would not be changed and that it would remain a viable event space for the neighborhood, Armstrong said.

“It is an icon, it is the legacy of (former state) Sen. Maxine Horner and (former state) Rep. Don Ross and making sure that the name remains a part of the prominence of the community,” he said.

Armstrong gave Mayor G.T. Bynum much of the credit for helping advance the discussions. The mayor sat down with representatives of the Greenwood Cultural Center and Tulsa Race Massacre Centennial Commission last week to discuss the lease and related issues.

Bynum said Monday that he thought the discussion went well.

“The most important thing I got out of it was everybody at that table wants this history center to happen,” Bynum said. “It was just a matter of making sure that everyone at that table also feels like we’re all moving forward together on this, this isn’t something that one party or another is being left out of the mix.”

Bynum said he understood the concerns expressed by the Greenwood Cultural Center board.

“The larger issue and the most important issue is that the Greenwood Cultural Center as an institution wants to be sure that they continue to have a role in shaping what happens with the property they have a 99-year lease on,” the mayor said.

The Tulsa Race Massacre Centennial Commission began a capital campaign in 2018 to help fund the Greenwood Cultural Center renovation, the Pathway to Hope and a history center that would come to be called the Greenwood Rising History Center.

The commission’s initial goal was to raise $16 million. The figure has increased to $30 million, $21 million of which has already been raised, Armstrong said.

That figure includes $5.34 million approved by voters last year for the cultural center, and $1.5 million in state funding. The rest of the funding has come from individual, corporate and foundation donations.

Bynum said he is working to see whether it would be possible to advance the Improve Our Tulsa renewal funds for the cultural center to get that project off the ground as soon as possible.

“The citizens of Tulsa approved those funds, I think, with the expectation that we have the centennial coming up, and in my mind, the sooner we can have those funds available, the better,” Bynum said.

The Greenwood Cultural Center board is expected to vote on the sublease later this month.

The bodies were exhumed earlier this summer as part of the city's search for unmarked burials from Tulsa's 1921 Race Massacre.

This conceptual design rendering shows the layout of proposed developments tied to the 1921 Tulsa Race Massacre centennial commemoration. The projects include the construction of Greenwood Rising History Center, a Pathway to Hope and the renovation of Greenwood Cultural Center. Thirty million dollars in public and private dollars are being raised to fund the projects. Renderings courtesy of Selser Schaefer Architects