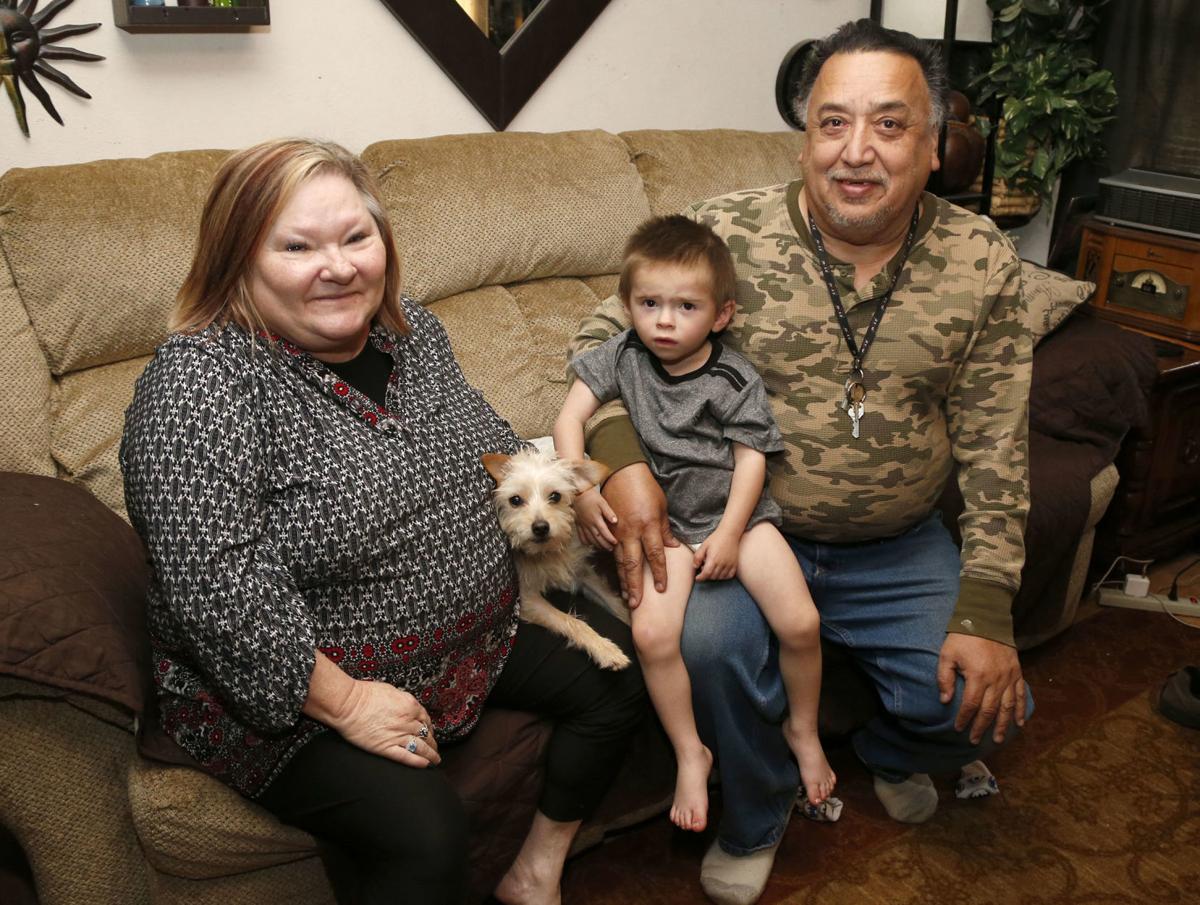 Vickie and Frank Perez sit with their grandson Alek and dog, JoJo, at their home in Jenks. STEPHEN PINGRY/Tulsa World 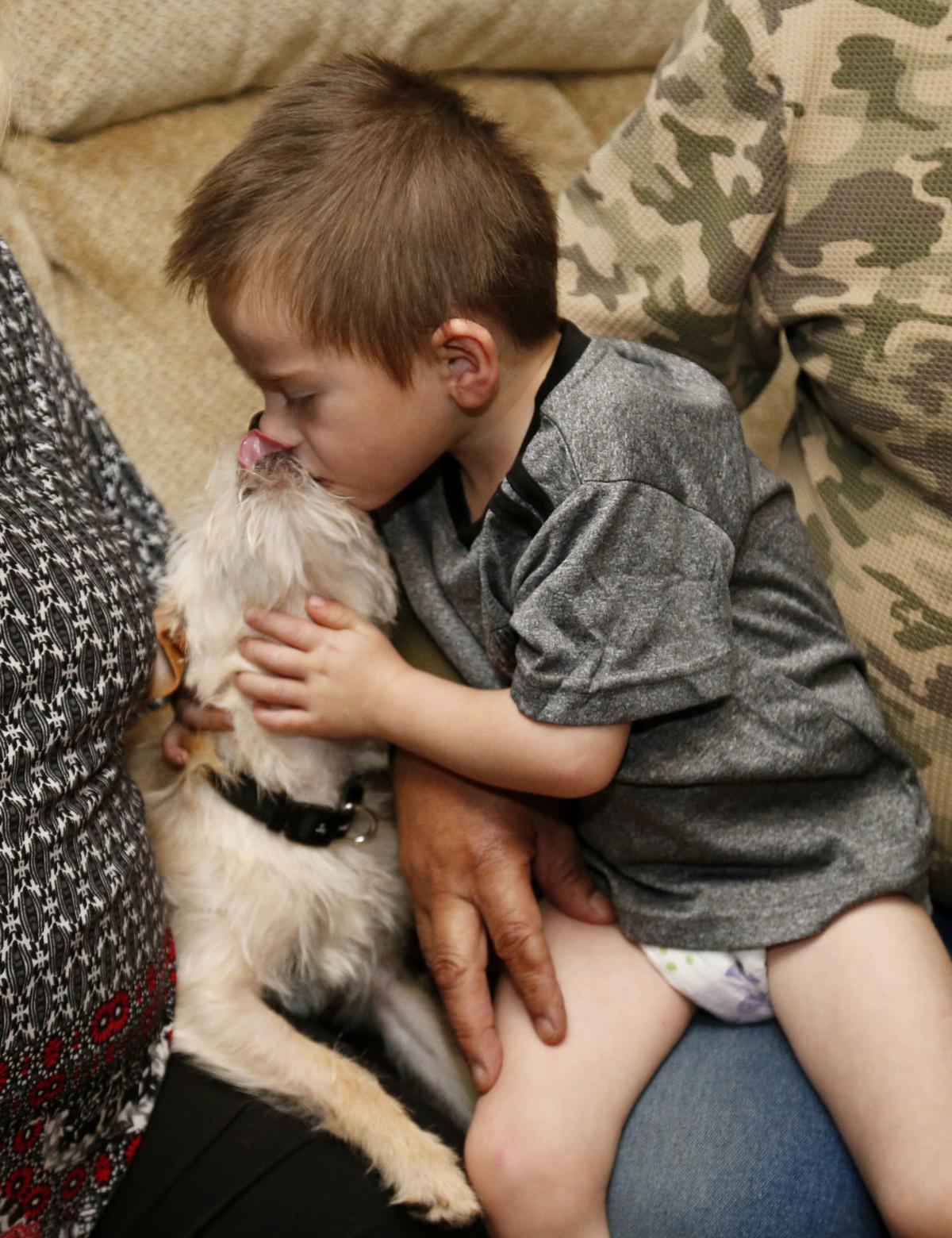 Vickie and Frank Perez’s grandson Alek gives their dog, JoJo, a kiss at their home in Jenks. 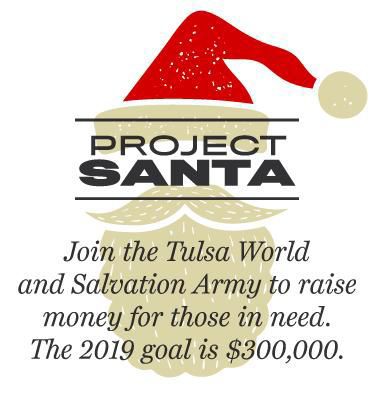 Go without power long enough, and it forces you to find ways to make do.

“We got by with a gas heater,” said Vickie Perez, recalling the two weeks nearly 30 years ago that she and her husband, Frank — still with four children at home — went without electricity.

“Frank hooked our TV up to a car battery,” she added. “You learn to be creative.”

The couple had fallen behind on their bills due to some unexpected bad luck, Vickie said. The family had just bought a home in Jenks and moved in when “we both lost our jobs,” she said.

The couple eventually found work. But over the years, periods of hardship have continued to come and go.

Vickie said she’s lost track of how many times their power has been cut off when they couldn’t pay the bill.

If only they’d known previously, she added, what they learned last year: that a helping hand is available.

Today, a year later, the Perezes are thankful for many things, but topping the list, they say, is that they live in a community that supports a program like Project Santa.

“I don’t want to cry, but we are very, very grateful,” Vickie said.

An annual partnership between the Tulsa World and The Salvation Army, the Project Santa holiday fund drive — formerly known as Neediest Families — kicks off this week with a goal of $300,000.

Throughout the holiday season, the World will feature stories about some of the families being helped through the fund.

The drive has raised more than $7 million since 1992, when the World first got involved. More than 1,500 area households are aided annually through the fund, which is administered by The Salvation Army.

Tulsa World Publisher Gloria Fletcher said the World is proud to once again team up with The Salvation Army.

“We hope as you read the heartfelt stories about the families who have been helped, you, too, will want to be a part of the effort by giving what you can,” she said. “If all of us work together, we can create a lot of smiles in our communities.”

For those who give to the effort, he said, “my prayer is that they will discover their experience of Christmas deepened by having joined in the celebration of giving in such a selfless way.”

‘A position to give back’

Among the families who’ve received help, the Perezes are far from alone in their gratitude for Project Santa.

For Linda Bollier — whose daughter Aleah’s health situation has meant an unending battle financially for the family — “it was a major, major help. It got us out of a bind,” she said.

In being there for them, the aid also provided “major stress relief,” Bollier said, allowing her to give her full focus to her daughter rather than mounting bills.

And that focus has been rewarded, she added.

After being homebound for most of her life, cut off from the “outside world,” Aleah is now living life to the fullest, her mom said.

Making it a year with her new liver means “chances of rejection are slim to none,” Bollier said.

“We’ve been through the struggles,” she added. “We’re now on to the blessings.”

When the Perezes called on the program last year, they were facing a similar challenge to Aleah’s family and many others.

Ongoing health concerns — both Vickie’s and those of their 3-year-old grandson, Alek, whom the couple are raising — had led to thousands of dollars in out-of-pocket medical expenses that were beyond their limited means.

Just as their electricity was about to be shut off, a granddaughter made them an appointment with The Salvation Army.

Vickie recalls that it wasn’t a route she wanted to go.

“I kept thinking that there’s got to be somebody out there that needs it more than us,” she said. “It’s almost like you don’t deserve it.”

But now, she’d give this advice to anyone considering the program: “Put your pride away and don’t be afraid to ask questions. Just be honest about your situation.”

Since first receiving the help last year, things have gotten better, the Perezes say. Alek, who has a gastroesophageal disease, has improved. He still has to eat special food through a feeding tube, but doctors are hopeful that soon that won’t be necessary.

They’re not out of the woods yet financially.

But Vickie is hopeful that day will come, and when it does she knows what she’s going to do.

“I hope we are in a position to give back to The Salvation Army. Because I am so grateful.”

A century-old Tulsa-area tradition returns this week with the kickoff of the annual Project Santa holiday fund drive.

This year’s goal for the drive, formerly known as Neediest Families, is $300,000.

Every Sunday, Tuesday and Thursday through Christmas Eve, the Tulsa World will have a story introducing readers to one of the families being helped this year.

Project Santa: Amid their own struggles, Tulsa couple, six children, look for ways to give back

It was hard for Derringer Gray — “it’s a humbling position as a man to accept help,” he said. But he’s hopeful that ultimately the experience will allow him to better serve others.

Vickie and Frank Perez sit with their grandson Alek and dog, JoJo, at their home in Jenks. STEPHEN PINGRY/Tulsa World

Vickie and Frank Perez’s grandson Alek gives their dog, JoJo, a kiss at their home in Jenks.