Opposition strong to gay marriage, according to poll
Share this
{{featured_button_text}}
1 of 2 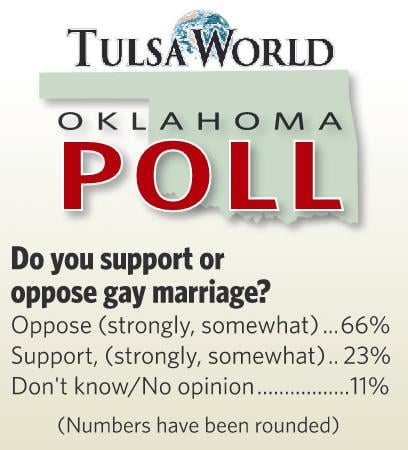 Two in three Oklahomans oppose gay marriage with areas of greater support for the issue found among Democrats, younger voters and urban area dwellers, according to an Oklahoma Poll.

The poll, among 393 likely voters statewide, found that 66 percent answered that they either strongly oppose or somewhat oppose allowing same-sex couples to marry.

The poll found that 58.1 percent of those asked said they strongly opposed gay marriage, while 8.1 percent were somewhat opposed to the issue.

“I’m a Christian and I believe what the Bible says, and it says it’s an abomination,” she said.

About 11 percent of those polled said they had no opinion on the issue.

Opposition to gay marriage was stronger among those identifying themselves as Republicans, with 77.9 percent of respondents saying they opposed the issue either strongly or somewhat.

Among Democrats, nearly 58 percent said they opposed gay marriage with 1 in 3 saying they supported the issue and about 12 percent having no opinion.

About 24 percent of independent voters, who make up about 12 percent of the electorate, said they supported permitting same-sex couples to marry.

Tulsan and poll participant Judy Stanford said her opinion on the issue has evolved over time.

“When the issue first came up I wasn’t so sure, but I just feel like they have the right to get married,” Stanford said. “Who am I to judge?”

Stanford said she believes gay couples should be permitted to marry so they have the same rights as married couples.

“I don’t agree with the lifestyle, but it’s their choice, their lives, and it doesn’t affect me,” Stanford said.

Harrison said she believes the courts may eventually rule in favor of gay marriage.

“The way our court system is set up now,” she said. “They probably will approve it, but that doesn’t make it right.”

Oklahoma is one of several states where the battle over the right of same-sex couples to marry is being waged in the courts.

A federal appeals court ruled on Wednesday that Utah’s ban on same sex marriages was unconstitutional.

The ruling by the 10th Circuit Court of Appeals in Denver pertains to a ban in the Utah state constitution against same-sex marriages, which is similar to a ban in Oklahoma’s constitution.

Wednesday’s ruling foreshadows a pending ruling by the appeals court on same-sex marriages in Oklahoma because of the similarity of the two cases and because the same judges who made the ruling will make the ruling in the Oklahoma case.

In addition to Oklahoma and Utah, federal or state judges in Oregon, Idaho, Virginia, Michigan, Texas and Arkansas recently have found state same-sex marriage bans to be unconstitutional. Judges also have ordered Kentucky, Ohio and Tennessee to recognize same-sex marriages from other states.

The U.S. Supreme Court last year struck down a portion of the 1996 Defense of Marriage Act, which barred the federal government from recognizing same-sex marriage. It determined the law improperly deprived gay couples of due process.

U.S. District Judge Terence Kern of Tulsa ruled in January that Oklahoma’s ban violated the equal protection clause in the U.S. Constitution. He immediately stayed his ruling, preventing any same-sex marriages from taking place while the ruling was appealed.

Public opinion in Oklahoma regarding gay marriage has changed some in recent years, according to the poll results.

Opposition to gay marriage was strongest in rural areas, with nearly 74 percent saying they either strongly opposed or somewhat opposed the issue and 17 percent favoring it, according to the poll.

About 30 percent of those polled who lived in the Tulsa and Oklahoma City areas said they favored gay marriage.

Opposition to gay marriage was strongest among the older age groups polled. Some 73 percent of those 65 and older said they opposed gay marriage.

Conversely, about 42 percent of those polled who were between age 25 and 34 said they supported gay marriage.

Asked if they had a gay family member, friend, co-worker or personal acquaintance who was gay or lesbian, some 70 percent of those polled said they did.

The poll was conducted by SoonerPoll.com and taken June 4-12. It has a 4.9 percent statewide margin of error.

A Bloomberg News National Poll taken between May 31 and June 3, 2013, found that 52 percent of the nation supported allowing same-sex couples to marry.

The poll of 393 likely voters registered in Oklahoma was conducted June 4-12 by SoonerPoll.com, using a random digit-dialing technique that included cellphone and landline telephone numbers. The poll was sponsored by the Tulsa World. The margin of error is plus or minus 4.9 percentage points. Poll results were weighted by gender and landline/cell phone usage. This poll conforms to the Standards of Disclosure of the National Council on Public Polls. A complete description of the methodology can be found at soonerpoll.com.