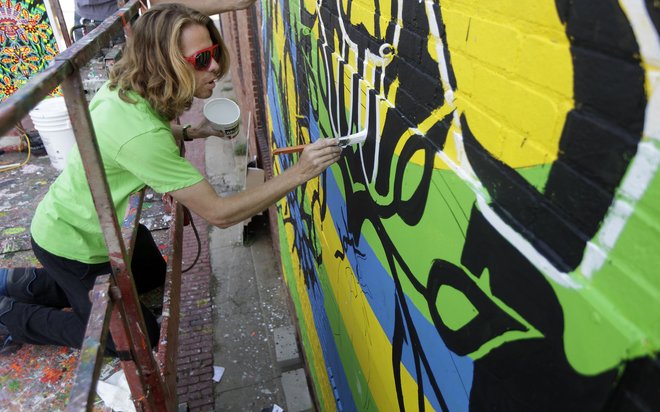 Artist Rick Sinnett paints a mural titled "Indian Warrior" on the side of the Rose Pawn Shop in downtown Tulsa. The mural is part of a plan to create 11 murals statewide along Route 66. MIKE SIMONS/Tulsa World 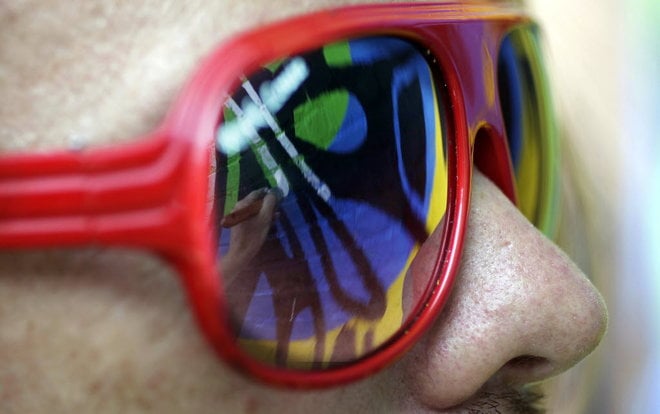 Artist Rick Sinnett's brush is reflected in his glasses as he paints a mural on the Rose Pawn Shop building at Second Street and Elgin Avenue in Tulsa's Blue Dome District. MIKE SIMONS/Tulsa World 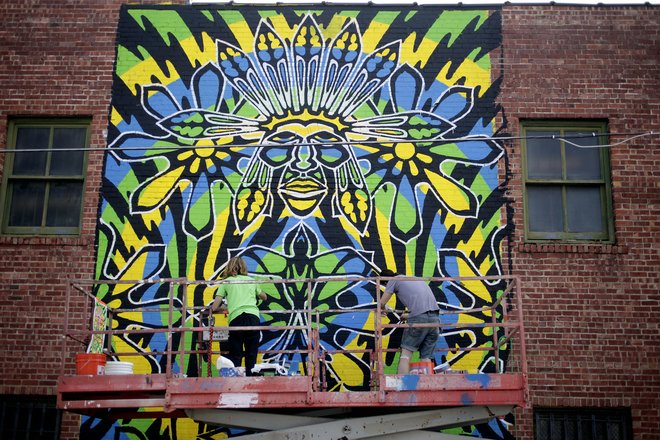 She bought the original pen-and-ink drawing for her collection at home, but Mary Beth Babcock kept noticing the bare brick walls of several downtown buildings.

"Wouldn't it be nice," Babcock eventually suggested to the artist, "to turn it into a really big mural?"

Titled "Indian Warrior," the piece on the side of the Rose Pawn Shop at Second Street and Elgin Avenue features an almost psychedelic collage of Oklahoma symbolism, including the state bird, the scissor-tailed flycatcher, and the state wildflower, Indian blanket.

"That would be a dream come true," artist Rick Sinnett told Babcock. But why stop with just one mural?

The idea for a single project in downtown Tulsa snowballed into an ambitious plan to create 11 murals statewide along Route 66.

Sticking to the "66" theme, they raised $6,600 to finish the first mural in El Reno, where Sinnett lives. Now he's working on the second, a scaled-up version of the drawing Babcock bought from him.

Actually, this larger mural is replacing a smaller "prototype" of the same design, which was put up earlier this year on the side of the pawn shop, which is around the corner from Babcock's store in the Blue Dome District.

"With all of those Oklahoma references going on," she said, "it really speaks to me."

In addition to T-shirt sales, the Tulsa mural is being financed by donations from Williams & Williams Real Estate Auctions.

The third mural will be painted in Bristow, with a fourth location already picked out in Stroud.

Several other towns have expressed interest in getting one of the seven others, Babcock said.

"It's a fun way to promote Route 66," Babcock said, "and show off some unique Oklahoma art at the same time."

Artist Rick Sinnett paints a mural titled "Indian Warrior" on the side of the Rose Pawn Shop in downtown Tulsa. The mural is part of a plan to create 11 murals statewide along Route 66. MIKE SIMONS/Tulsa World

Artist Rick Sinnett's brush is reflected in his glasses as he paints a mural on the Rose Pawn Shop building at Second Street and Elgin Avenue in Tulsa's Blue Dome District. MIKE SIMONS/Tulsa World