Sandy Bates was a kindergarten teacher at Catoosa for about 30 years. She was not famous and doesn’t have her name inscribed on a building. She’s like so many teachers, whose names end up on hearts instead of monuments.

To me, she was Sandy, and she was my mother-in-law. To the little ones arriving at school, often for the first time ever, she was Mrs. Bates. I knew she had been a kindergarten teacher in her pre-retirement life; but I didn’t fully understand the kind of influence she had on all those young lives. Not until recently.

It’s worth remembering, especially as kids have just gone back to school, that one of the most influential people in a child’s life is the person standing in front of the classroom (or sitting cross-legged on the floor reading with them).

Mrs. Bates died last month at age 79, after a long battle with cancer. A couple of days later, her friend and coworker, Paula Greenburg, emailed the family. Today, I want to share some of that message, because maybe it will sound familiar. Maybe you have a Mrs. Bates in your school — the kind of teacher whose positive influence leaves an impression generations later.

Here is some of what Paula shared:

• She revealed the magic of reading to countless kids.

• Did they come to school with shoes that were too small? She traced their little foot onto a piece of paper and off she went to Walmart after work to buy that needed pair of shoes.

• Did the family struggle with English because Spanish was their native language? (She) spoke to them in their native tongue and directed them to available services.

• Did one of her students need glasses but had no money to pay? (She) contacted the local Kiwanis or Lions Club to see that it was taken care of.

• She was professional to the core. She was always where she needed to be. Never absent. Never late. Never taking off early.

• How many summers did she devote to prepping for the next school year? Or tutoring? Or translating?

• She had a moral standard within her that just could not abide injustice. She was a force to be reckoned with and no one who worked with her will ever forget the value that she brought to every life she touched.

After her retirement, Mrs. Bates didn’t stop teaching, whether it was English as a second language or story time with preschoolers at the Catoosa library.

There are people called to do this work, and we are blessed to have them.

But I bet if she was reading this, Mrs. Bates would tell me she was not special (she was). She just loved those kids; and she probably would say there are a lot of good teachers out there who feel exactly the same way. 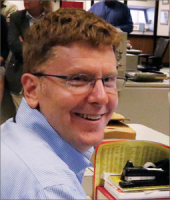