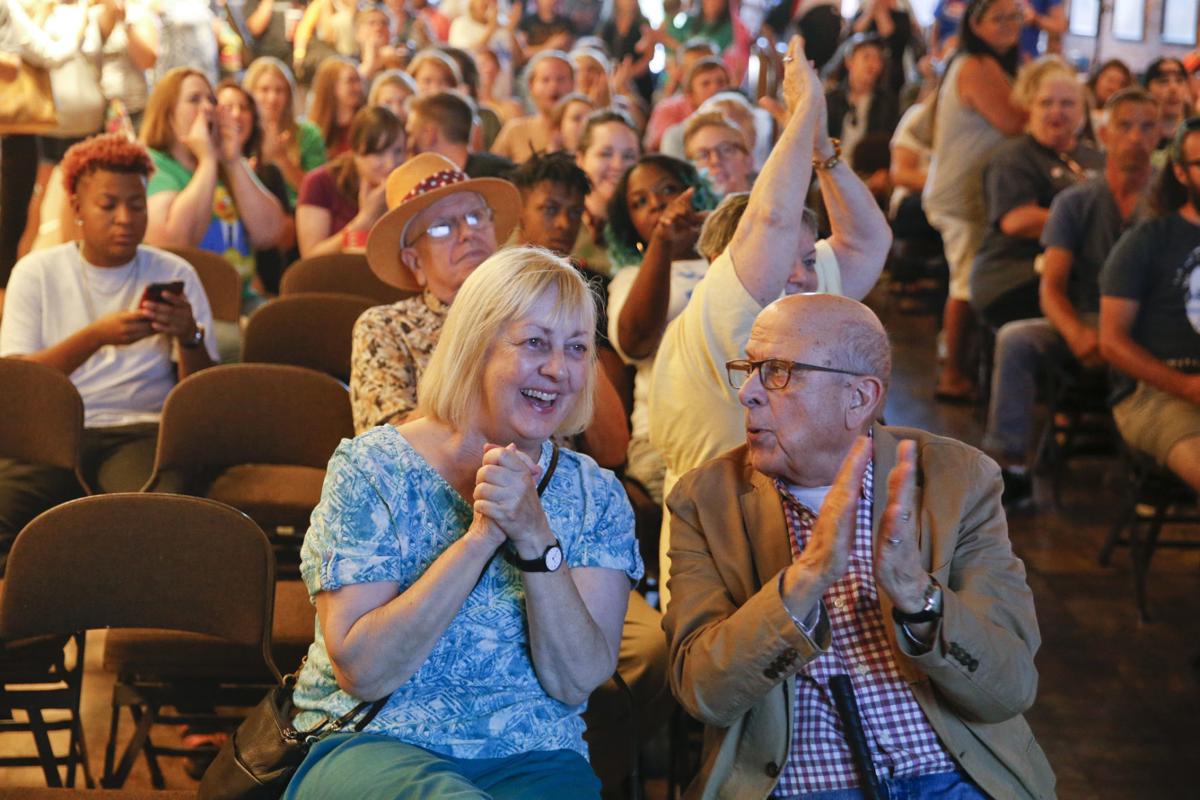 Sue Woodward and Dwight Kealiher, both of Tulsa, celebrate while watching voting results during a Yes on 788 watch party at Circle Cinema on Tuesday. IAN MAULE/Tulsa World 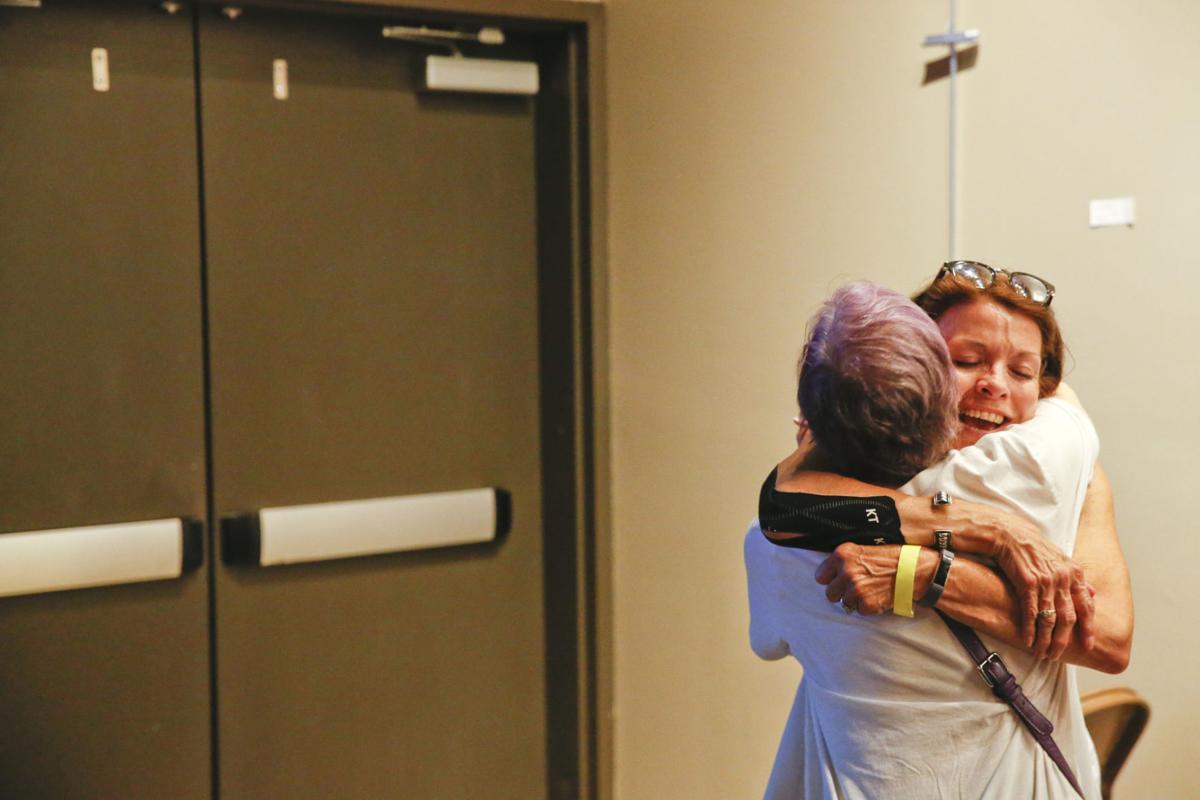 Marleta Giles and Peggy Pianalto, both of Tulsa, hug after State Question 788 was declared to have passed during a Yes on 788 watch party at Circle Cinema. IAN MAULE/Tulsa World 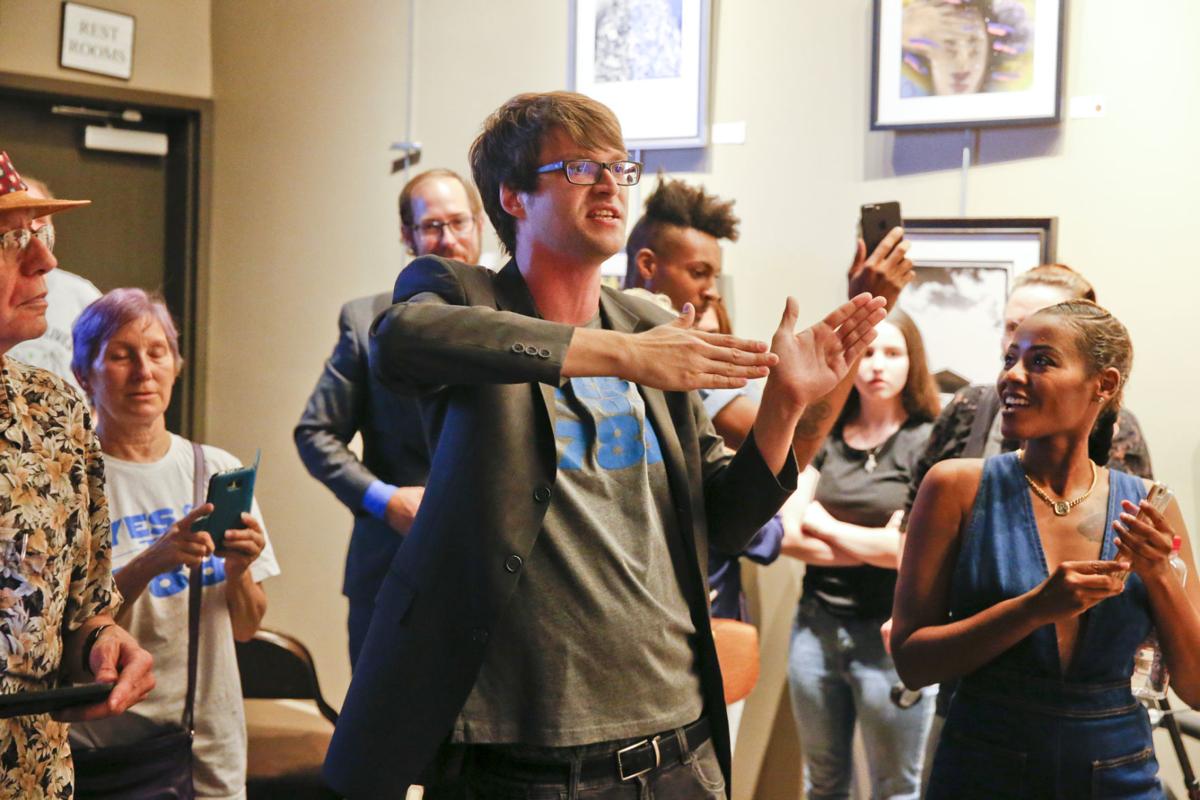 Vote Yes on 788 president Frank Grove addresses a crowd as State Question 788 was declared to have passed during a Yes on 788 watch party at Circle Cinema on Tuesday, June 26, 2018. IAN MAULE/Tulsa World 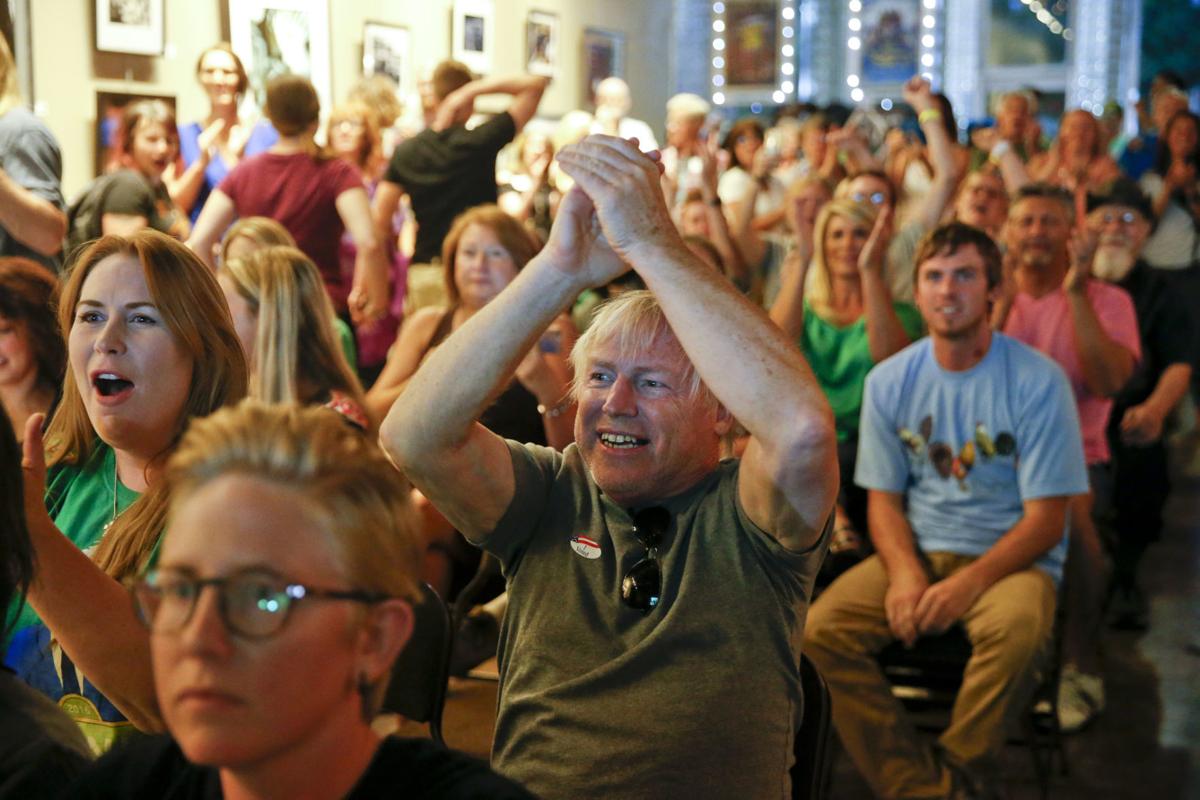 Marty Jackson, of Tulsa, claps in celebration while State Question 788 was declared to have passed during a Yes on 788 watch party at Circle Cinema on Tuesday, June 26, 2018. IAN MAULE/Tulsa World 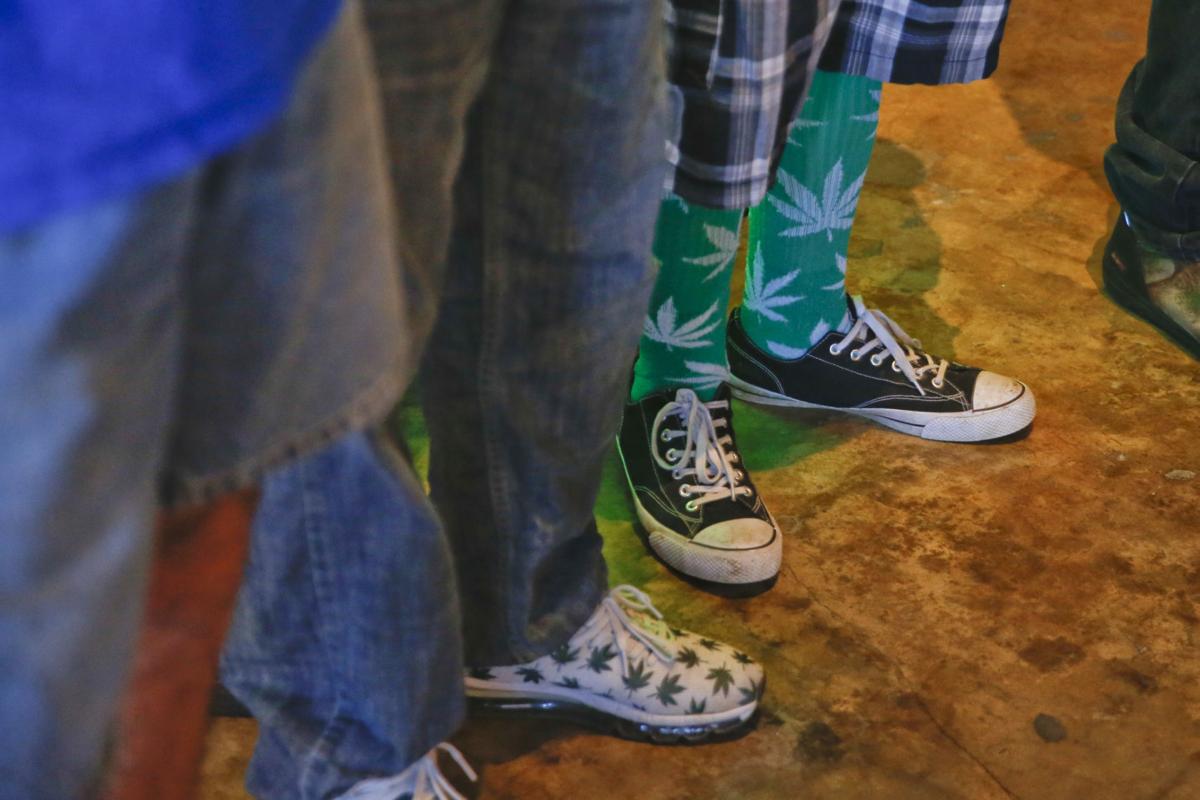 Supporters wearing marijuana shoes and socks watch as results come in during a Yes on 788 watch party at Circle Cinema. IAN MAULE/Tulsa World

Interactive graphic: See how each county voted on State Question 788.

Update (after press time): With 1,951 precincts reporting, 57 percent of voters were in favor of legalizing medical marijuana in Oklahoma.

Oklahoma voters on Tuesday appear to have made it legal to use, sell and grow marijuana for medicinal purposes in a referendum two years in the making.

About 57 percent of voters approved the measure.

“Without the people behind this movement, we would not be here tonight,” said Frank Grove, chairman of the Vote Yes on 788 political action committee, at a Tulsa watch party. “Because of people like you that came out here tonight, that voted, that gathered signatures, we are changing the face of Oklahoma.”

State Question 788 would take effect in just 30 days, so lawmakers are expected to scramble back to the Capitol to tackle the host of regulatory issues raised by the creation of an all-new licensing program and marijuana processing industry.

After years of medical marijuana bills going nowhere and other initiative petition efforts fizzling before they made it to the ballot, activists launched this initiative petition drive two years ago. In crafting their proposal, they borrowed heavily from existing programs in 30 other states, most notably Colorado, California and Arizona.

“No one can stop an idea whose time has come,” said Shawn Jenkins, secretary for the Vote Yes on 788 political action committee. “No one can stop common people for a common cause coming together — no matter how much money (you spend) or lies you try to speak.”

Jenkins was joined at Tuesday’s watch party at Circle Cinema in Tulsa by his reason for advocating – his 6-year-old son, Carver.

Carver was born with a rare disorder that caused 80 percent of his brain to be missing and intractable epilepsy.

Jenkins, a U.S. Army veteran and native Oklahoman, said he and his wife didn’t want to break the law or move out of their home state to get their son access to what he said “cutting-edge science” shows can provide relief for intractable epileptics.

“We firmly believe Carver has the right to the best quality of life he can have,” said Jenkins. “I wouldn’t advocate for this if it were recreational marijuana.”

Many leaders of the opposition group, SQ 788 is Not Medical, maintain that they are not opposed to Oklahoma establishing a much more restrictive medical marijuana program but derided the ballot initiative as “the most liberal” medical marijuana law in the U.S.

“We are obviously disappointed by the outcome, as we believe 788 is simply too broadly written to be considered a legitimate medical marijuana program. However, we respect the will of the voters and our member groups look forward to working with the Legislature and the Health Department to advance common-sense regulations that benefit patients while protecting businesses and communities,” said Dr. Kevin Taubman, a surgeon, assistant professor at the University of Oklahoma College of Medicine, Tulsa, and co-chairman of SQ 788 is Not Medical.

Gov. Mary Fallin reacted to Tuesday’s vote by saying she will turn her attention to the regulatory process.

“I respect the will of the voters in any question placed before them to determine the direction of our state. It is our responsibility as state leaders to look out for the health and safety of Oklahoma citizens,” said Fallin. “I believe, as well as many Oklahomans, this new law is written so loosely that it opens the door for basically recreational marijuana. I will be discussing with legislative leaders and state agencies our options going forward on how best to proceed with adding a medical and proper regulatory framework to make sure marijuana use is truly for valid medical illnesses.”

What the measure says:

• Patients may possess up to 3 ounces of marijuana on them and up to 6 ounces at home, as well as grow up to six plants and six seedlings.

• Employee discrimination based on status as a marijuana patient is prohibited.

• The Oklahoma State Department of Health will establish a special office funded by taxes on medical marijuana sales to oversee the program.

• Patients with a doctor’s signature will apply for a two-year license at a cost of $100, or $25 for those with Medicaid or Medicare.

What the measure doesn’t say:

• Qualifying medical conditions for legal marijuana use are not specified, as in all other states’ medical marijuana programs.

• No legal limit or any other exemptions for licensed patients from Oklahoma’s zero-tolerance laws for drivers who test positive for THC, the psychoactive component in marijuana, or its metabolites.

Late Tuesday evening, the Oklahoma State Department of Health announced that it had been working for three months to prepare to implement the requirements of SQ 788.

“Now that Oklahoma voters have approved the measure, OSDH is confident that we are ready to meet those requirements by the specified time and that the process will be handled with integrity,” read the department’s written statement. “Emergency rules governing the Oklahoma Medical Marijuana Authority will be considered by the Oklahoma State Board of Health at their July 10 meeting.”

Application information and requirements will be available by July 26 for all of the defined categories and the state agency will begin accepting applications no later than Aug. 25.

Program information will be made available online at omma.ok.gov.

Interactive graphic: See how each county voted on State Question 788.

Michael Overall: Claremore embraces a cutting-edge plan to ‘save the suburbs’ — Should other Tulsa communities do the same?

Local officials want to encourage new developments in historic parts of town 'without disturbing what is already there or spoiling what has made those areas so special in the first place.'

Sue Woodward and Dwight Kealiher, both of Tulsa, celebrate while watching voting results during a Yes on 788 watch party at Circle Cinema on Tuesday. IAN MAULE/Tulsa World

Marleta Giles and Peggy Pianalto, both of Tulsa, hug after State Question 788 was declared to have passed during a Yes on 788 watch party at Circle Cinema. IAN MAULE/Tulsa World

Vote Yes on 788 president Frank Grove addresses a crowd as State Question 788 was declared to have passed during a Yes on 788 watch party at Circle Cinema on Tuesday, June 26, 2018. IAN MAULE/Tulsa World

Marty Jackson, of Tulsa, claps in celebration while State Question 788 was declared to have passed during a Yes on 788 watch party at Circle Cinema on Tuesday, June 26, 2018. IAN MAULE/Tulsa World

Supporters wearing marijuana shoes and socks watch as results come in during a Yes on 788 watch party at Circle Cinema. IAN MAULE/Tulsa World