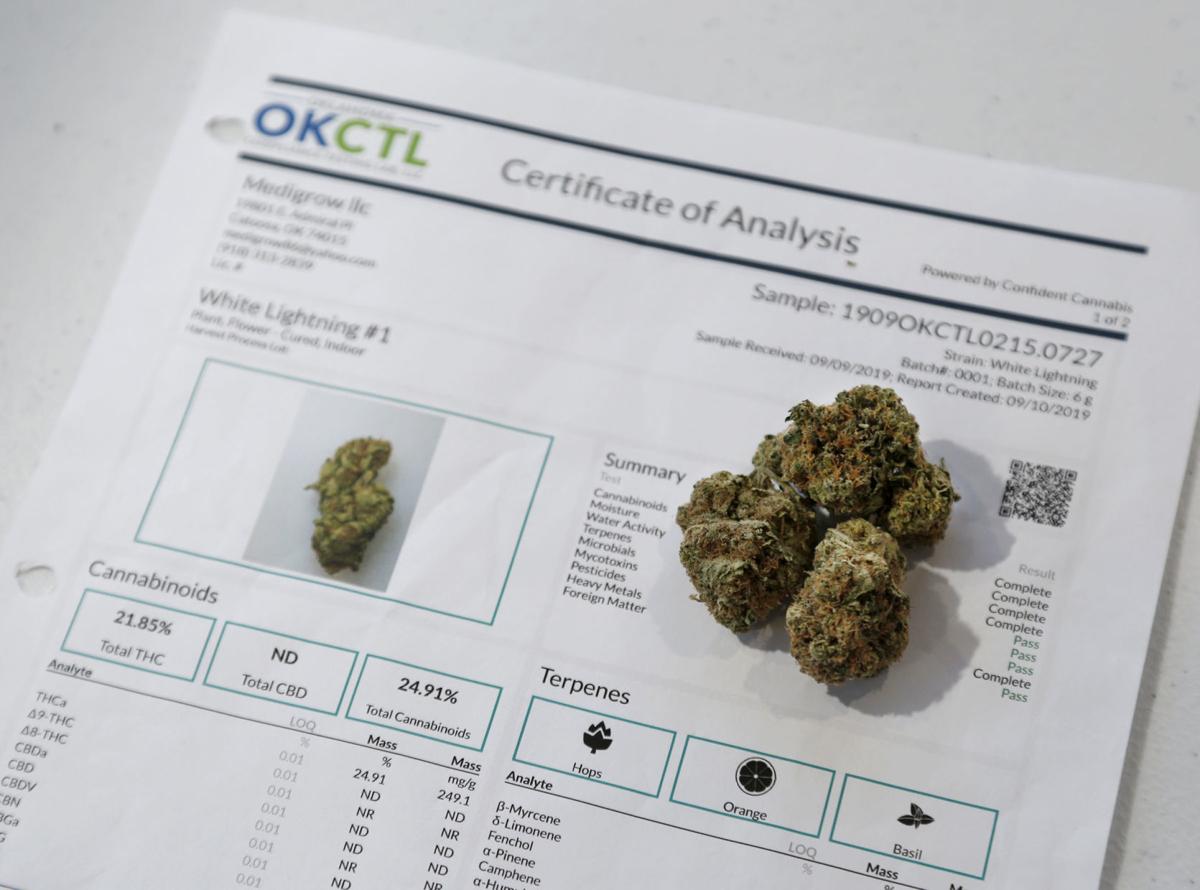 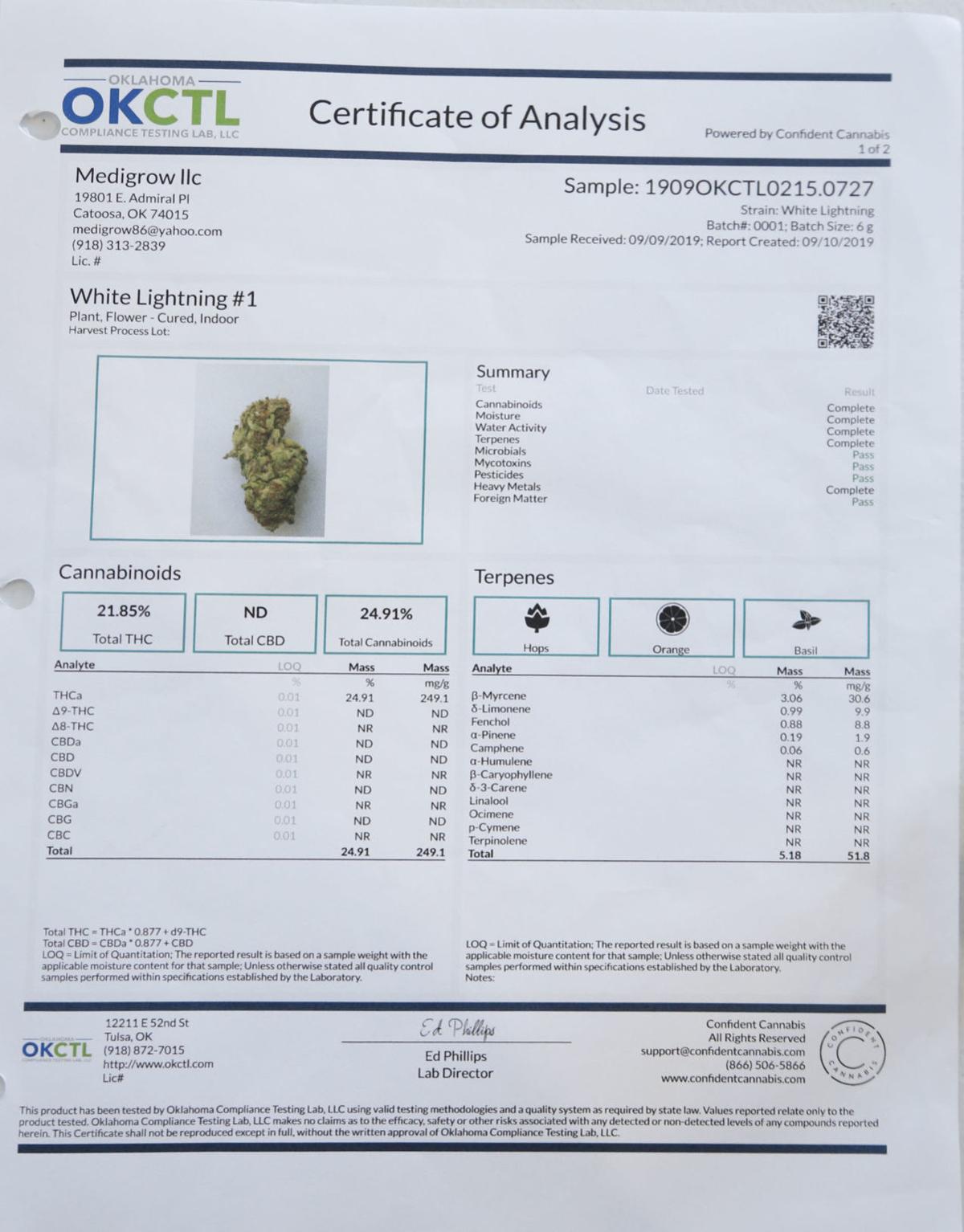 An example of medical cannabis test results is pictured at Whole Leaf dispensary in south Tulsa.

A law that went into effect nearly two months ago states businesses can only sell medical cannabis products that have proof of testing.

But as of Friday, there are zero laboratories properly licensed with the Oklahoma Medical Marijuana Authority.

“The law says (testing) needs to be done by strain and by an OMMA-approved lab. They have not approved any labs yet,” said Austin Miller, who owns Cloudi Mornings LLC, a grow facility in Broken Arrow. “You can take the same sample to as many different laboratories as you want and you’ll get a different result from every single one.”

Emergency rules that went into effect last month state that harvest batches for growers and processors cannot weigh more than 10 pounds. Such batches of flower must consist of a “uniform strain” grown, dried or cured under the same conditions, and it must also be harvested at the same time from the same location.

“These are being used for medicinal purposes. It’s called medical marijuana,” Rhoades said. “And by implication, there’s going to be people, for instance cancer patients, who may be susceptible more than the general public to feel effects from contaminants. We’re calling it medical marijuana and it’s incumbent upon us to make sure, as in anything else medical, to do no harm.”

Melissa Miller credited the OMMA’s staff with its ability to meet “pretty aggressive” timelines for implementation of State Question 788, subsequent legislation such as HB 2612 and the release of emergency rules as new laws take effect. But Austin Miller noted there is already a high ratio of licensed businesses to laboratories offering cannabis testing, which can cause lengthy delays for growers, processors and dispensaries.

As of Oct. 7, the OMMA has approved more than 200,000 patient applications. It has licensed 4,063 growers, 1,651 dispensaries and 1,168 processors as of the beginning of the month. There are only a handful of laboratories in operation in the state.

“Dispensaries are trying to be competitive with their pricing and also be compliant with everything,” he said, adding that tests can cost up to $375 per sample.

“I would like the state of Oklahoma’s left hand to know what the right hand is doing. It is blatantly obvious that they do not. I was working on a perpetual harvest to where I always had something going. But because they want a batch that’s 10 pounds and tested ... I’ve had to restructure (my grows) and pull 10 pounds at a time. It’s not really worth it unless I am.”

Felling said he has tested more than 10,000 product samples and at this point averages a turnaround of between same day and five business days. However, he said he believes some of the guidelines labs have to follow are “vaguely written.”

“It kind of puts you in a little bit of a situation — is the testing legal or not if you haven’t been licensed by OMMA yet?” Felling said of the situation, adding that testing regulations vary widely among states with legal cannabis marketplaces. But despite the legal ambiguities, Felling said he has been able to adapt to what he called a “heavy workload” of samples to test.

But Chris Moe, a patient advocate who helps lead the Oklahoma Cannabis Liberty Alliance, called the current testing landscape a “joke” and a “farce.” He said the limited guidance for laboratories and shops causes instability in the state’s medical program.

“We’re not serving the medical community right now,” Moe said. “Cannabis is a plant. It varies greatly from the bottom to the top. The only testing that’s working is heavy metals and pesticides. But when it comes to medicine, we need an accurate terpene profile and we’re still not getting that.”

Ryan Sheehan, who owns Whole Leaf dispensary in south Tulsa, said he started requiring proof of testing as a condition of carrying products in his store as soon as a laboratory opened in the state. He said patients often can’t afford to send products for testing post-purchase and that he has in the past refused to sell products if test results weren’t readily available.

“Because the state hasn’t laid our (license) applications yet, we just have to work with labs that are accredited in other ways,” Sheehan said. “But if you send the same sample to four different labs, you might get four different results. And that’s really odd. You shouldn’t. But somehow that’s happening, so some standardization would be really nice.”

Ethan Miller, a manager at Whole Leaf, said he hopes the OMMA bolsters its education efforts so businesses will be more familiar with what tests they need to have on hand as well as how to read results. Austin Miller, from Cloudi Mornings LLC, said he has had to work with an attorney in order to understand what to do so he can be in compliance.

“We see groups of people on Facebook who are asking questions about interpreting the law. They’re desperate because they’re trying to do their job right and they’re terrified of losing their licenses,” Ethan Miller said.

During an interim study to address the relationship of medical cannabis businesses to others in the agriculture industry, OMMA reported progress of "about 40%" to having businesses undergo a full inspection.

Financial incentives to cut corners, black market sales and a lack of state enforcement ability are forcing professionals in the booming industry to self-police even products supposedly already tested, the Oklahoman reports.

Kathleen Windler's lawsuit claims that the Jones Brown law firm offered her as a "service to clients": standing in as an Oklahoma resident for medical marijuana businesses to skirt a residency requirement from SQ788.

The Oklahoma Bureau of Narcotics and Dangerous Drugs Control denied approval for 401 marijuana business licenses in July based on evidence indicating "criminal business structure" and "ghost owners," according to a information provided during an interim legislative study.

Rep. Jon Echols, R-OKC, a legislative leader in medical cannabis since the passage of SQ788, supports the appointment of Adria Berry while noting “fundamental flaws” that still exist within OMMA's structure.

An example of medical cannabis test results is pictured at Whole Leaf dispensary in south Tulsa.