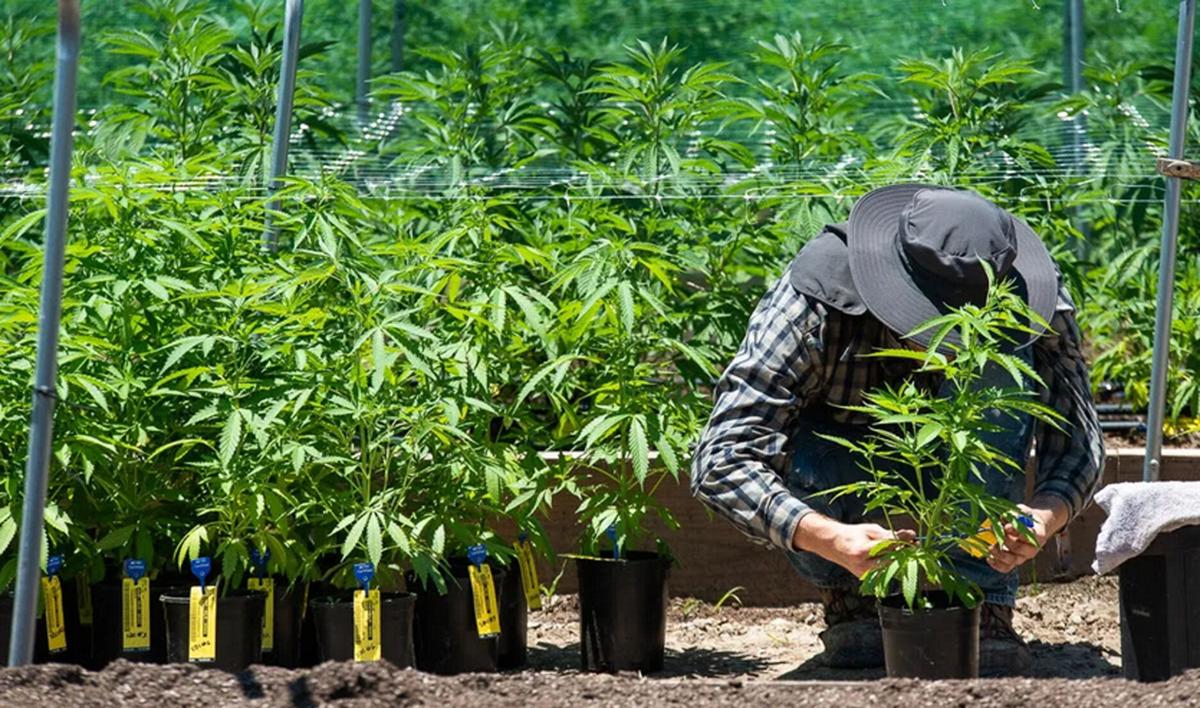 An employee is pictured checking the Metrc tracking tag on a marijuana plant at Apothecary Extracts’ grow site in Beggs.

A 2019 law change established Oklahoma’s seed-to-sale system — to verify that medical marijuana is grown, processed, transported and sold under the law — but has been held up in court before implementation could start.

The Oklahoma Medical Marijuana Authority’s efforts at putting the seed-to-sale system in place at the end of April was delayed by a lawsuit from a group of businesses who said the state was forcing them to buy the tags needed to track the cannabis products.

The lawsuit argues that Metrc would get roughly $15 million from monthly service fees and from the sale of product tags to thousands of business licensees. The fees are 45 cents per plant tag and 25 cents per package tag, records show. Tag costs and monthly subscription fees for the platform was a tax or fee never approved by the Legislature, according to attorney Ron Durbin.

“Go adopt some lawfully appropriate regulations to implement your seed-to-sale tracking program,” said Durbin, who filed the lawsuit on behalf of some dispensary clients. “OMMA has way over complicated this.”

A judge in Okmulgee County agreed to halt implementation until the end of June, and a hearing on the issue is set for Tuesday.

The state’s 7% medical marijuana excise tax, which has brought in $109 million since 2018, should allow for the authority to pay for the seed-to-sale tracking systems and tags, or at least the costs for the first few months, Durbin said. (Medical marijuana products are also subject to state and local sales taxes.)

The medical marijuana authority declined to comment on the lawsuit but said in court filings the state legally awarded the contract to Metrc and a seven-month training and implementation period had been derailed by the lawsuit. Metrc allows other seed-to-sale programs or point-of-sales systems to communicate with its tracking system. More than 7,100 licensees in Oklahoma have already signed up to use the Metrc system.

“It is only once a commercial licensee’s data makes its way into Metrc that the OMMA can view and track that inventory,” Kelly Williams, the authority’s director, said in an affidavit filed in the case. “In other words, the contract with Metrc provides the OMMA a cloud-based system that gives it visibility in real time to perform its auditing and regulatory function.”

Metrc wasn’t named in the original lawsuit. The company successfully argued in a June 1 hearing that it should be allowed into the lawsuit as a party because the temporary restraining order interfered with its state contract. The next hearing is scheduled for June 29 in Okmulgee County.

She said Metrc’s costs, for the license and the RFID tags, are less than 1% of the expenses for her Oklahoma businesses. She spends much more to test cannabis, with an estimated $2 million in testing costs this year compared to $20,000 in Metrc tags.

“Anytime you have a new system, it can be overwhelming or cumbersome and it’s a bit fearful because you don’t know it,” said Wiebe, who had a Colorado cannabis business that used Metrc. “But shortly after it was implemented, everyone could see the value in transparency and everyone using the same system.”

Wiebe said some of the reluctance to use the Metrc system might be because it’s easy to manipulate the current system.

“Based on working with hundreds of growers at this point, and our challenge in getting license verification, test results or batch information, 9 of 10 places we can’t work with because they can’t provide us that information,” she said. “I think most people who don’t want Metrc don’t want it because it eliminates those loopholes or that ability to easily get unregulated product into the market.”

Sam Bein, owner of Rocking Star Farm in Inola, said enforcement and seed-to-sale tracking are the only ways to ensure legal businesses are on a level playing field. Bein was initially a Metrc skeptic but said he’s come around to the platform after seeing how it worked.

“It’s going to make it harder to cheat,” Bein said. “Illegal products are still going to get in here, but Metrc is going to slow it down. If you’re a legal business and you’re buying from certified and compliant farms like ours, our product is going to be safe for you. I think the consumer is going to gravitate to those dispensaries and those farms.”

To make up for some of the costs of the Metrc system, Bein said lawmakers should direct the Oklahoma Tax Commission to provide tax credits or deductions to allow medical marijuana businesses to write off their compliance costs. Because marijuana is a controlled substance at the federal level, many deductions or credits available to other industries aren’t available to cannabis businesses under federal tax law. Limited banking options also force many businesses into cash-only operations.

“These costs get passed on to the patient,” Bein said. “If we make those costs higher, then we drive people back to street drugs and out of the safe, legal means of going to a dispensary and the state won’t receive any tax revenue.”

Legalization of recreational marijuana is "not a matter of if; it's a matter of when," said Jed Green, who helped establish the group behind two ballot initiatives seeking to legalize cannabis use for anyone at least 21 years old and replace the state medical marijuana industry's current oversight agency.

Also discussed: interest among lawmakers in imposing a cap on the number of licenses issued for certain types of cannabis businesses.

Mark Woodward, the OBN's public information officer, told a state House of Representatives committee he expects hundreds of OBN grower licenses will be rejected for renewal or allowed to expire in the coming months.

The new director of the Oklahoma Medical Marijuana Authority acknowledged Thursday that the agency hasn't been able to inspect licensed businesses as often as it should have in its first three years.

An employee is pictured checking the Metrc tracking tag on a marijuana plant at Apothecary Extracts’ grow site in Beggs.