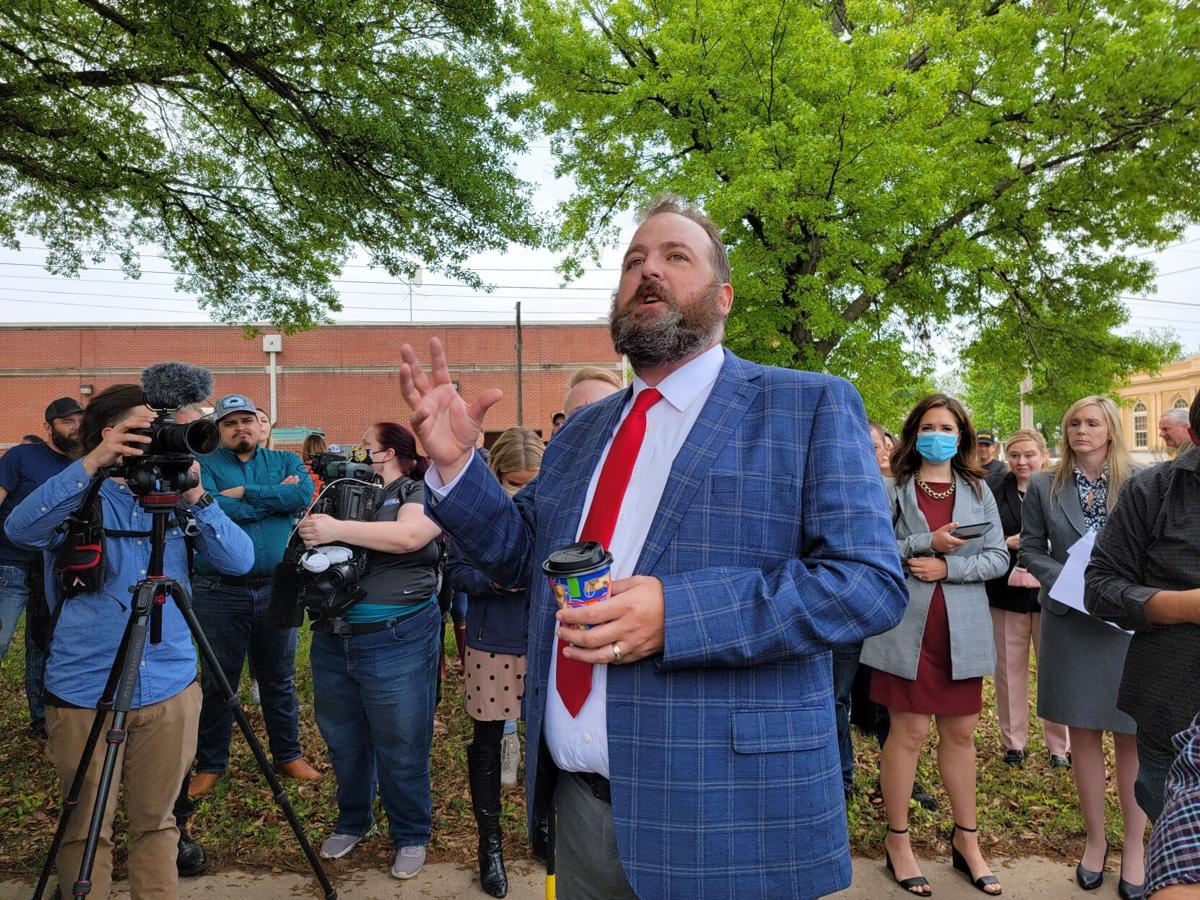 Attorney Ron Durbin (center) speaks outside the Okmulgee County Courthouse on Thursday after obtaining a temporary order that postpones the implementation deadline for a medical cannabis seed-to-sale tracking requirement. Durbin filed a lawsuit on behalf of a processor who alleges that the agency’s actions created a monopoly on an essential service that could force businesses to increase prices. 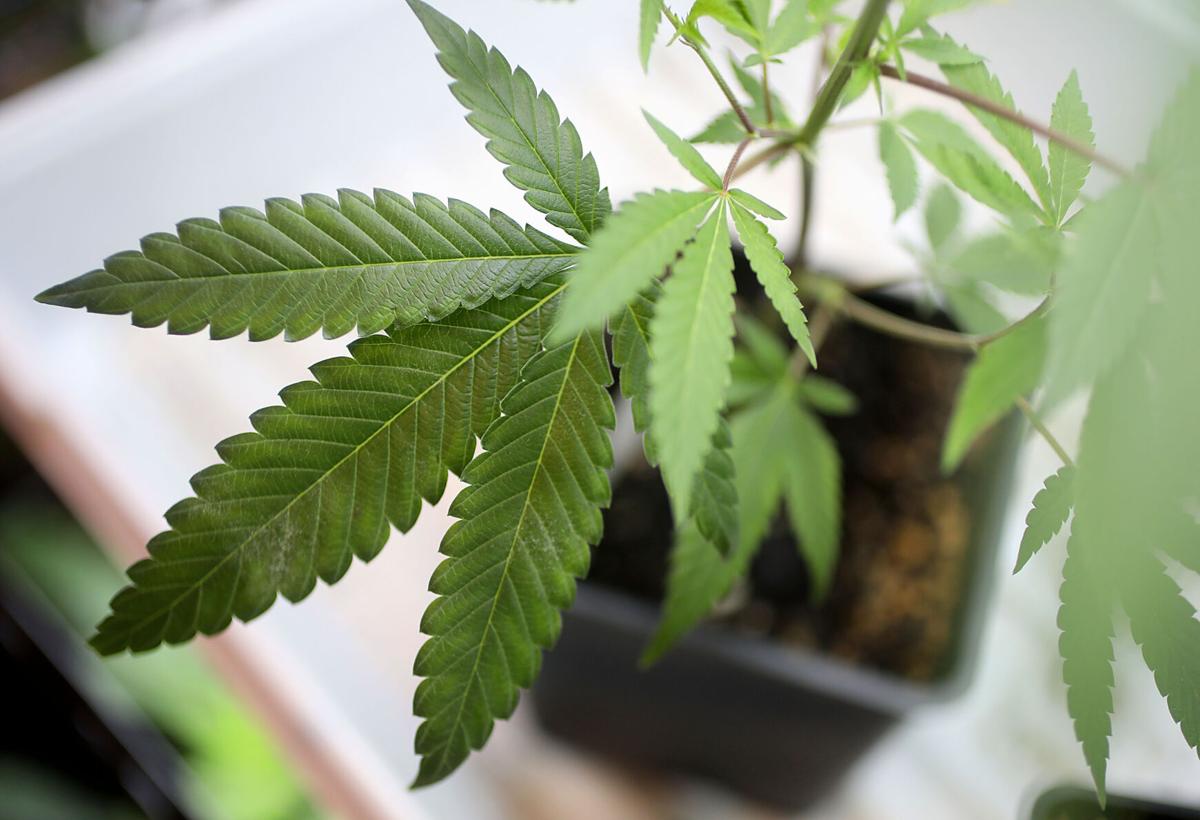 Marijuana plants must be tracked under a requirement of the Oklahoma Medical Marijuana Authority.

OKMULGEE — The state of Oklahoma’s contract with a Florida-based cannabis “seed-to-sale” tracking company could change after an Okmulgee County judge temporarily stopped enforcement of a requirement that businesses fully integrate with the platform.

A copy of the judge’s order, signed Thursday, says the Oklahoma Medical Marijuana Authority and Okmulgee-based processor Dr. Z Leaf agreed “in the interest of judicial economy” to halt a rule for 60 days that would have required businesses to use the services of Metrc.

Before the OMMA announced that an agreement had been reached Wednesday evening, businesses would have had to fully integrate their information into Metrc’s tracking platform by Friday.

The order comes about a week after Tulsa attorney Ron Durbin filed suit on behalf of Beau Zoellner, who operates Dr. Z Leaf in Okmulgee County.

Durbin argued that the OMMA wrongly gave Metrc a monopoly over the practice when it signed a contract with the organization last year, and he said he has yet to find a legal requirement that businesses use a single company to provide seed-to-sale tracking services.

“That is not the way our state government is supposed to work,” he said Thursday after leaving the Okmulgee County courthouse.

“Government is supposed to work with their citizens, work with the businesses that they’re regulating, work with the 380,000 patients that we have in this state, to make it a better program. They’re not simply here to suck off all of the tax revenue from this and then screw patients and screw businesses.”

Special Judge Pandee Ramirez authorized the order during a brief in-chambers hearing and said she would hear more information in the case June 29. Okmulgee County sheriff’s deputies told media and at least 100 spectators to wait outside, saying COVID-19 safety rules limit in-person attendance in court to attorneys and clients.

However, the order does not bar business owners from using Metrc’s platform voluntarily if they choose.

Durbin and Zoellner’s lawsuit argues that Metrc, if allowed to proceed, would get roughly $15 million from monthly service fees and from the sale of product tags to thousands of business licensees. The fees are 45 cents per plant tag and 25 cents per package tag, records show.

In filing the lawsuit, Zoellner has said his business already works well with another seed-to-sale tracking service that does not impose a requirement to purchase item tags.

“This injunction, even if it expires in 60 days, we just saved Oklahoma businesses about a million dollars in two months from $40 monthly fees,” Durbin said Thursday. “Based on their estimates, … we saved another $2 million in tag expenses for these businesses because of these two months.”

A copy of the bid proposal Metrc submitted last year includes a letter in which its COO says, “We understand the importance of this medical marijuana tracking system to Oklahoma’s need for regulatory oversight” of the cannabis industry.

Meanwhile, Metrc’s contract says the $40 monthly fee and item tag fees are charged as a way to help recoup an “initial investment” of the money Metrc spent to make its system functional in Oklahoma in accordance with the contract. The money also “supports future system improvements,” according to the contract terms.

It indicates that the fees are not charged until a business gets credentials to use the platform but that Metrc will provide training on how to use its services free of charge.

OMMA spokeswoman Terri Watkins said Thursday afternoon that the agency does not comment on pending litigation. The OMMA posted a brief announcement to its social media pages and sent an email Wednesday evening to give notice of the extension through at least June 30 “in accordance with a court agreement,” but it did not elaborate on details.

“We will continue to provide commercial licensees with additional information as it becomes available,” the notice says.

Durbin said Thursday that he’s met with OMMA leadership “countless numbers of times” to express that business owners are frustrated with “a lack of communication and guidance from the agency.”

“They (the OMMA) are the ones that are supposed to be telling all of you how to do things the correct way,” he said, later adding: “We’re not asking not to be regulated. We’re simply asking to be told what the regulations and the expectations are before you try to force a law on us.”

Watch Now: Trump goes to court to get his Twitter back

A patient's complaint of "significant negative effects" launched the investigation into THC-O-acetate, which compounds the intoxicating properties of THC and is derived in a highly dangerous process.

Legalization of recreational marijuana is "not a matter of if; it's a matter of when," said Jed Green, who helped establish the group behind two ballot initiatives seeking to legalize cannabis use for anyone at least 21 years old and replace the state medical marijuana industry's current oversight agency.

Also discussed: interest among lawmakers in imposing a cap on the number of licenses issued for certain types of cannabis businesses.

The new director of the Oklahoma Medical Marijuana Authority acknowledged Thursday that the agency hasn't been able to inspect licensed businesses as often as it should have in its first three years.

Attorney Ron Durbin (center) speaks outside the Okmulgee County Courthouse on Thursday after obtaining a temporary order that postpones the implementation deadline for a medical cannabis seed-to-sale tracking requirement. Durbin filed a lawsuit on behalf of a processor who alleges that the agency’s actions created a monopoly on an essential service that could force businesses to increase prices.

Marijuana plants must be tracked under a requirement of the Oklahoma Medical Marijuana Authority.