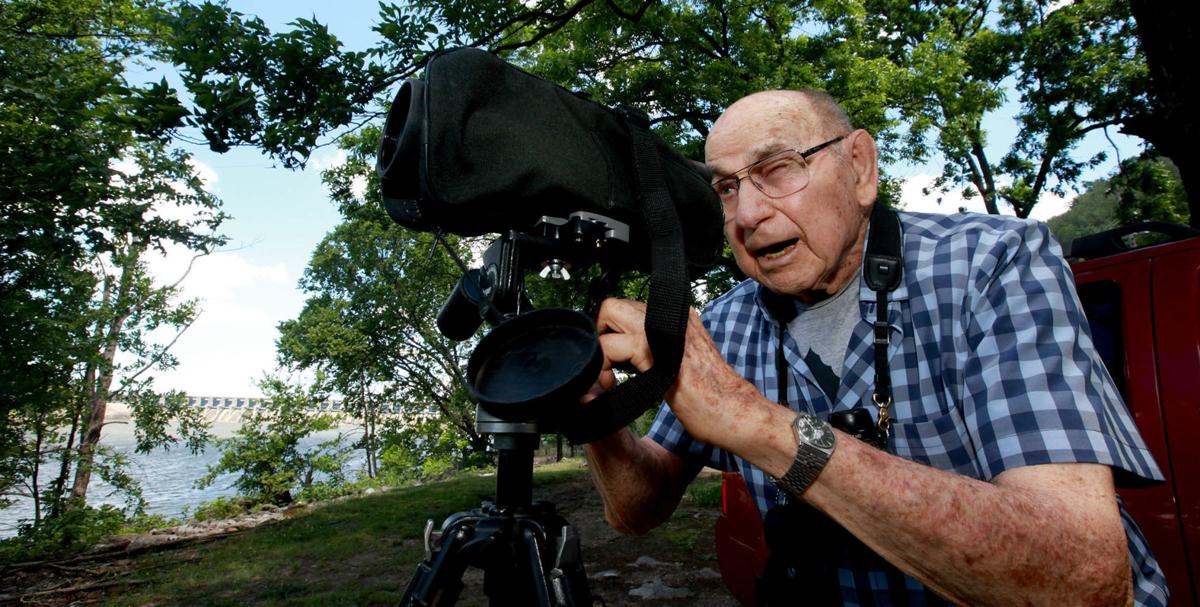 Naturalist Jim Harman, 95, is set up with his spotting scope at a location below Fort Gibson Dam on the Grand River, where he has educated countless future conservationists over the the past 40 years. KELLY BOSTIAN/Tulsa World 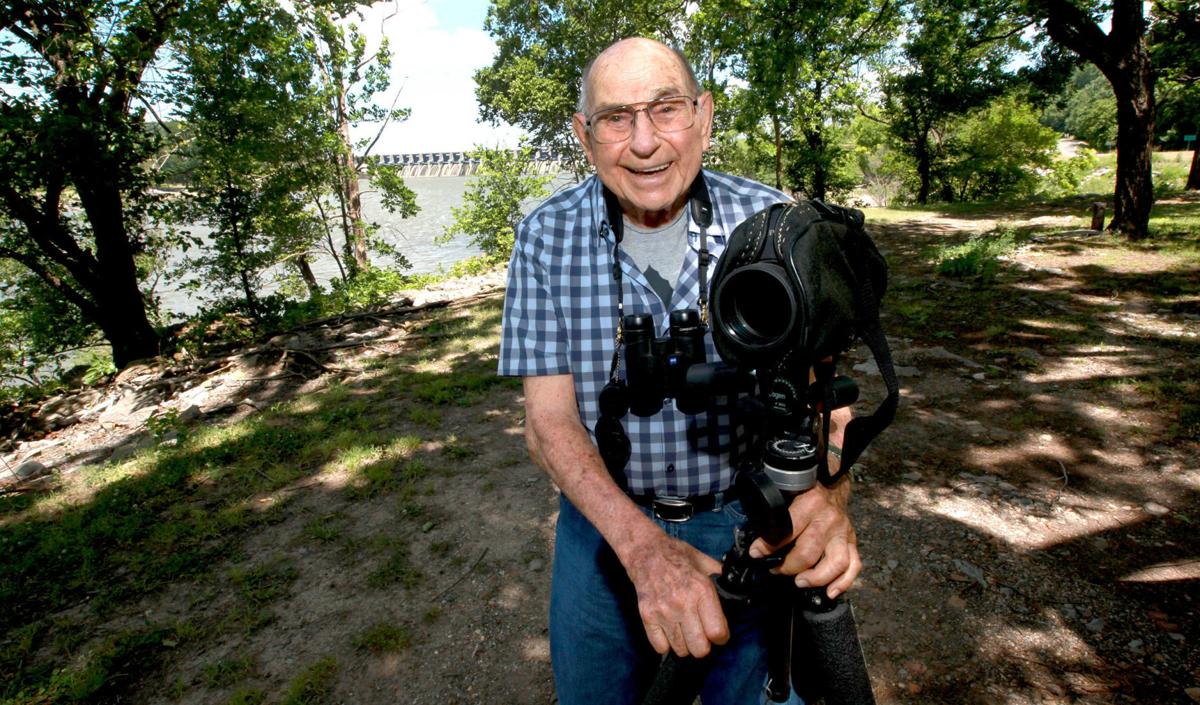 Jim Harman spent decades as a professional naturalist for the U.S. Fish and Wildlife Service. Now retired, he still shares his love of wildlife with Oklahomans from his hometown of Fort Gibson. KELLY BOSTIAN/Tulsa World

FORT GIBSON — Handing over one of his better sets of binoculars, Jim Harman rolled off instructions on focusing the glasses as he has countless times, automatically.

“That’s going to help you see everything clearly,” he said.

At 95 years of age, Jim Harman has helped countless Oklahomans focus on nature. The lifelong naturalist returned home after a 30-year career as a wildlife refuge manager with the U.S. Fish and Wildlife Service at age 55. For the past 40 years he has volunteered to lead countless school children on field trips and mentored untold numbers of grownups in the ways of the wilds.

In his role as a private citizen he likely has had an impact on Oklahoma conservation few others can or will ever match. He also has witnessed things in the wilds he never imagined, like the number of bald eagles now in this state.

A past president of the Indian Nations Audubon Society, many may remember Harman as a friendly face leading wintertime bald eagle tours below Fort Gibson Dam.

He can’t drive anymore but still has his caretaker take him around to monitor bald eagle nests from Fort Gibson to Gore for the Sutton Avian Research Center’s Bald Eagle Survey Team. He brings new flavor to the acronym BEST.

“I’ve done pretty well keeping myself out of the pool halls by volunteering for the Sutton Center,” he said.

He said it is a wonder that more than 200 eagle nests now dot the Oklahoma landscape. He monitors several for the center and last week, on a drive to see if some eagles on a new nest on the Illinois River near Gore still were around, he appreciated the success of the eagle reintroduction program.

“When they started that program in 1985 I thought if I lived long enough to see five or six eagle nests out of that reintroduction it would really be a big success,” he said. “The success of that program has been beyond any expectations. And I lived well beyond expectations,” he added with a laugh.

Life began for him on March 31, 1925, in a home that now is just across the street from the stockade area of the Fort Gibson Historic Site. His father was a market hunter for a short time but found the hours long and the pay low, Harman said. He was an entrepreneur who did some plumbing, and also owned a gravel operation and a riverboat service with his brother.

“That was our cattle pasture, where the stockade is now,” he said.

He grew up during the Great Depression but didn’t mention hardships as a child. He recalls following his father into the field to hunt birds and spending days with his older brother going up and down the Grand River, fishing, hunting quail and learning more about wildlife than he could truly appreciate at the time.

When he was too young he volunteered to join the U.S. Army Air Corps because “I wanted to be a hotshot pilot,” he said. He was turned down because he is color blind.

“I told them well if you want me then, you’re going to have to draft me,” he said. “About two weeks after I turned 18 they did!”

Despite his color blindness he still scored high in his Air Corps training to be a navigator for the Boeing B-17 Flying Fortress, but a near-fatal brush with rheumatic fever that hit him during training in South Dakota kept him grounded. He spent six months in the hospital with little more than aspirin for treatment and was discharged due to heart damage.

“You know you don’t even hear about that disease anymore with antibiotics,” he said. “Strep throat is all it was to start with.”

The military’s loss was the U.S. Fish and Wildlife Service’s gain as Harman returned to Northeastern State University to gain a wildlife degree that would allow him to join the Oklahoma Department of Wildlife Conservation as “a fish guy” in 1949 and then soon transfer as a refuge manager at the Wichita Mountains National Wildlife Refuge in 1950.

In his career he saw the fledgling stages of Muleshoe refuge in Texas before its playas were joined under one boundary, and at the Aransas refuge on the Texas coast he watched over about 18 to 21 whooping cranes, the majority of the species at the time.

In 1958 he move to Hutchison, Kansas, and helped design and establish the Quivera National Wildlife Refuge.

“Not everyone up there was happy about that,” he said. “But everything I told them then has come true. It has become a major draw and people go there from all over the country.”

After 12 years at regional headquarters in Albuquerque, New Mexico, he bargained for a transfer to Tishomingo in 1978 and after 30 years, at age 55, he retired and returned to Fort Gibson to care for his ailing mother.

The past 40 years he played key roles as a leader in the Audubon Society and volunteered for committees to help rewrite laws for the refuge system and built hundreds of bluebird boxes for the North American Bluebird Society. But he said he believes his best contributions always have been in outreach to people and especially school children.

“More than anything I enjoyed teaching those kids about wildlife,” he said. “It’s something everyone can appreciate their whole life.”

Nature-inspired activities for all ages: A guide from Tulsa World's Outdoors writer

Michael Overall: When COVID hits home, complacency has to end

It’s no longer just about the economy or politics or keeping schools open or “getting back to normal.” It’s life and death.

No explanation for the move has been provided, but Nick Doctor confirmed that he had been let go; Mayor G.T. Bynum did not respond to a request for comment.

Naturalist Jim Harman, 95, is set up with his spotting scope at a location below Fort Gibson Dam on the Grand River, where he has educated countless future conservationists over the the past 40 years. KELLY BOSTIAN/Tulsa World

Jim Harman spent decades as a professional naturalist for the U.S. Fish and Wildlife Service. Now retired, he still shares his love of wildlife with Oklahomans from his hometown of Fort Gibson. KELLY BOSTIAN/Tulsa World