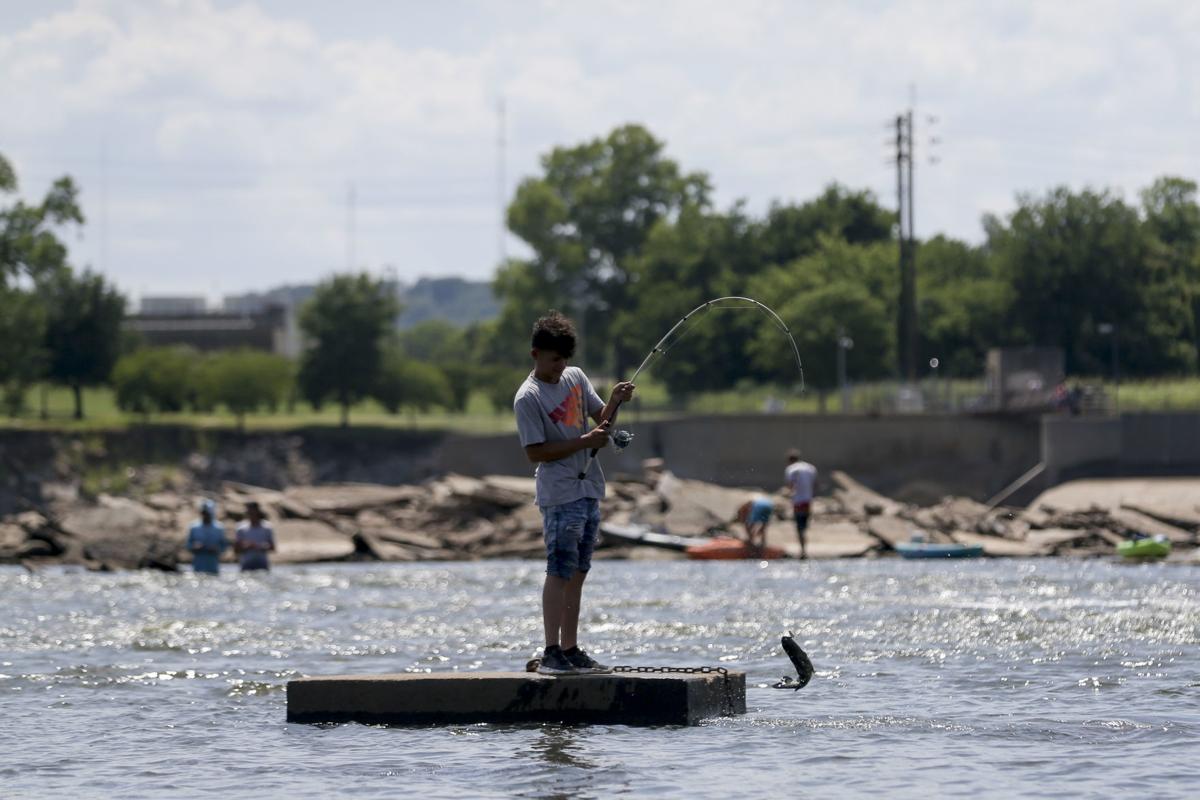 An angler pulls up a fish from the Arkansas River near the Gathering Place in Tulsa on Tuesday, July 7, 2020. IAN MAULE/Tulsa World 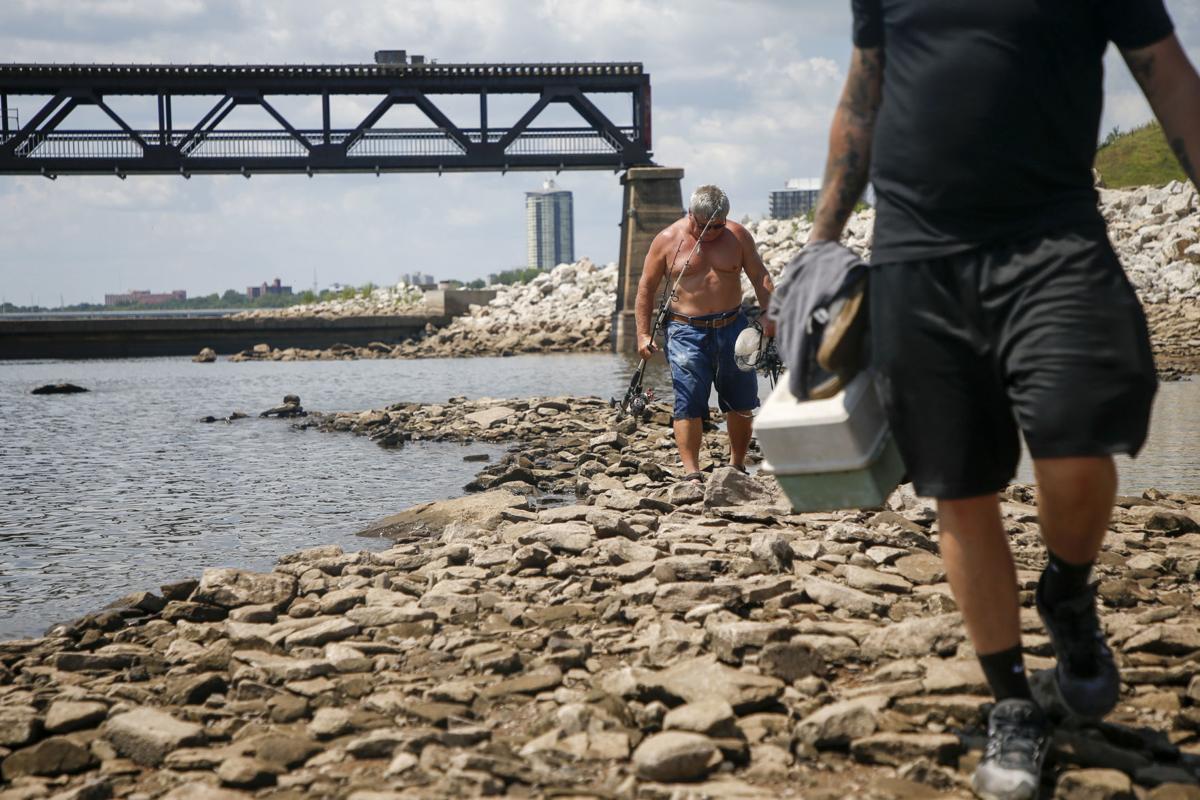 David Terry of Kellyville and Patrick Westervelt of Orlando, Florida, carry their gear after fishing below Zink Dam near the Gathering Place in Tulsa on Tuesday, July 7, 2020. IAN MAULE/Tulsa World 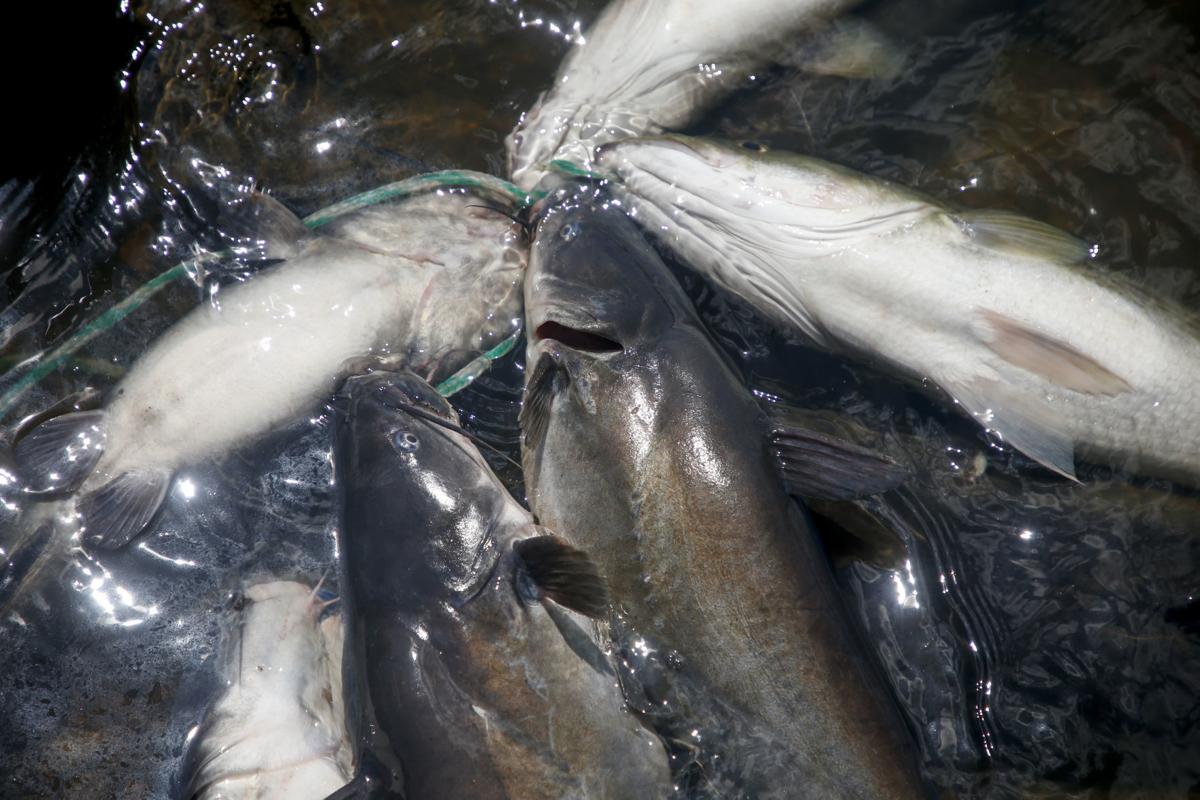 Fish that have been caught sit in the water of the Arkansas River near the Gathering Place on Tuesday, July 7, 2020. IAN MAULE/Tulsa World

An angler pulls up a fish from the Arkansas River near the Gathering Place in Tulsa on Tuesday, July 7, 2020. IAN MAULE/Tulsa World

David Terry of Kellyville and Patrick Westervelt of Orlando, Florida, carry their gear after fishing below Zink Dam near the Gathering Place in Tulsa on Tuesday, July 7, 2020. IAN MAULE/Tulsa World

Fish that have been caught sit in the water of the Arkansas River near the Gathering Place on Tuesday, July 7, 2020. IAN MAULE/Tulsa World

Periodic low-water conditions in the Arkansas River are tempting people to take advantage of exposed and vulnerable fish. But game wardens are watching.

Carlos Gomez, a longtime Oklahoma Department of Wildlife Conservation warden for Tulsa County, said the violations are not unusual but seem to be in greater number and earlier in the season this year.

More of it might be happening at the river because of the dry June weather and people being off work due to continuing COVID-19-related shutdowns, he guessed.

“The bottom line is we tend to have this happen when the rainfall is low, the heat is high and the gates (at Keystone Dam) are shut,” he said. “The combination of low water and more people exposes a lot of fish, and there are always going to be that percentage of people who say, ‘Let’s get some of those.’”

Fish in shallow pools have been caught by hand and by net and shot with bows and arrows, he said. All of those methods are legal, but it depends on which fish, when and where.

Cast-netters can collect bait fish and nongame fish, but many have been taking game fish such as striped bass, white bass and catfish with their nets, as well, Gomez said.

One couple was cited for shooting seven paddlefish with a bow and arrows on a Friday. Catch-and-release of paddlefish is allowed only when snagging with rod and reel and barbless hooks of a specified size in certain areas.

Snagging paddlefish is not allowed from Keystone Dam downstream to the Interstate 44 bridge, but bowfishing in the area is allowed.

Regulations do not allow paddlefish to be kept on Fridays or Mondays when caught by any method. Further, anglers have to tag each paddlefish they keep and may keep only one fish a day and only two per year.

“It is against the law to release a paddlefish shot with an arrow,” Gomez said. “If you shoot it, you have to keep it. There is no catch-and-release archery. … We watched them shoot seven, and the limit is two per person per year.”

Gomez and Game Warden Travis Garrett handed out many tickets over the holiday weekend and continue to monitor the situation on a daily basis, he said.

Gomez said the wardens try not to punish too harshly and give out more verbal warnings than tickets. They also try to issue $100 citations that can be handled like a speeding ticket rather than charges that go to court and can be more costly.

People should know they generally have been watched for some time before they are approached and that it does them no good to deny doing what the wardens have watched them doing for an hour or more, he said.

Gomez said the wardens stopped one man with fishing rods in one hand and pulling a stringer weighed down with 18 catfish, all ranging in size from 27 to 31 inches long, on a sidewalk at the Gathering Place.

Although they had watched him fishing, the man told wardens he wasn’t fishing, that he did not have a fishing license, and that he was just helping his father, who did have a license.

Regardless, there he was holding fishing equipment and in possession of fish, Gomez said. Also, the combined daily limit for blue and channel catfish is 15, and people may keep only one blue catfish that is over 30 inches long. It was just a matter of which fines to administer, Gomez said.

Josh Johnston, northeast region fisheries supervisor for the Oklahoma Department of Wildlife Conservation, said legal bowfishing harvest of paddlefish in the area is encouraged because so many paddlefish have started to build up below Zink Dam and most are not in good condition, likely due to crowding and lack of food, he said.

He added that even legal catch and release of sport fish in the area requires care due to the heat and warm water.

“Catching them is stressful, and then you’re returning them to an environment that is already stressful,” he said. “Delayed mortality,” when a fish dies hours or days after being caught and released, is not uncommon in the summer months in many different species, he said.

“We introduced striped bass to the river, but they do not like warm water,” he said. “They can deal with it, but we have to be careful and quick and get them back in the water right away.”

Gallery: Nature-inspired activities for all ages