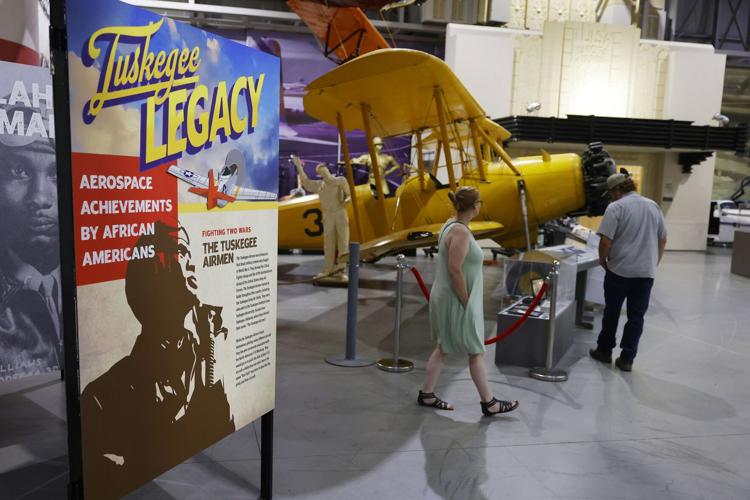 Visitors view items near the “Tuskegee Legacy” exhibit at the Tulsa Air and Space Museum on Friday. 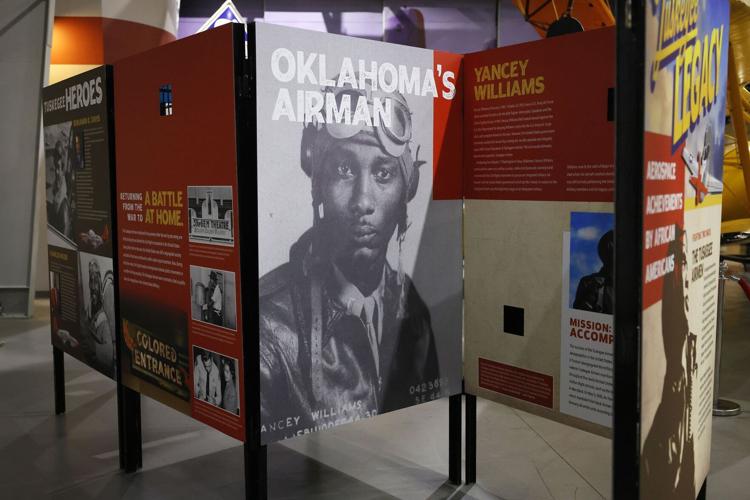 Yancey Williams of Tulsa is featured in the "Tuskegee Legacy" exhibit at the Tulsa Air and Space Museum. 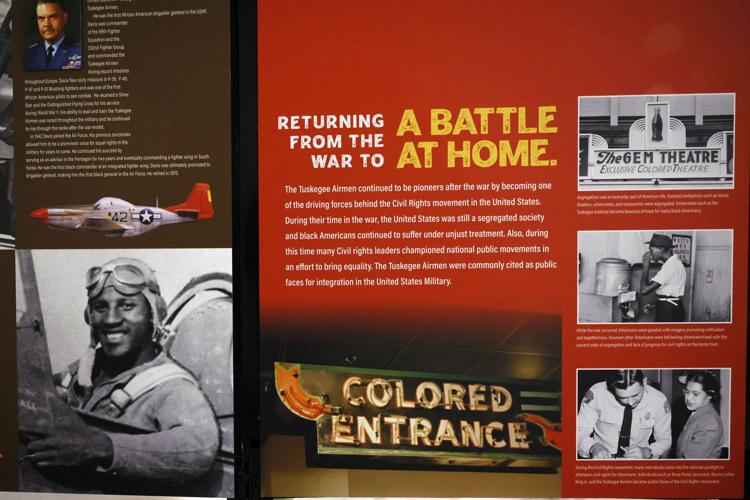 Starting this week, visitors to the Tulsa Air and Space Museum will be able to learn more about Tuskegee pilots when the museum unveils its new “Tuskegee Legacy” exhibit. A ribbon-cutting is set for 2 p.m. Tuesday. 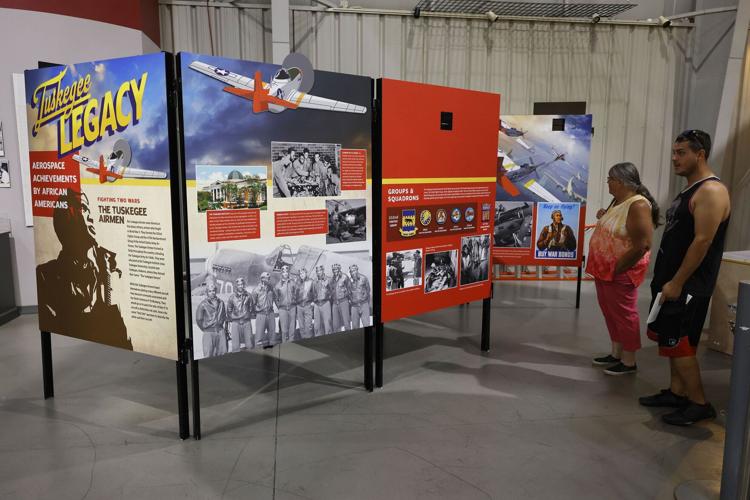 Starting this week, visitors to the Tulsa Air and Space Museum will be able to learn more about Tuskegee pilots when the museum unveils its new "Tuskegee Legacy" exhibit.

For Yancey Williams and many other would-be fighter pilots, there seemed to be no getting around it.

Qualifications notwithstanding, their color barred them from flying for their country.

But rather than just let it go, Williams, a former Tulsan, decided to push back.

He filed a federal lawsuit, and as a result, a new program at Tuskegee Institute in Alabama would be launched, finally giving African American aviators the chance they’d wanted.

Starting this week, visitors to the Tulsa Air and Space Museum will be able to learn more about Williams and other Tuskegee pilots when the museum unveils its new “Tuskegee Legacy” exhibit.

A ribbon-cutting is set for 2 p.m. Tuesday.

The exhibit tells the story of the Tuskegee Airmen, the now-legendary group of African American aviators who broke racial barriers at home to help win World War II in Europe.

It’s been in the works for a year and a half, and museum staff and supporters are excited to finally be able to share it with the public, curator Alex London said.

“We’ve wanted to highlight the Tuskegee Airmen in our museum for a long time. It’s something visitors have asked about,” London said.

Williams, who died in a plane crash in 1953 at the age of 37, is just one of the historical figures featured.

But he’s one the museum especially wanted to highlight because of his ties to Tulsa — ties that for too long have gone unacknowledged.

Williams, who moved to Tulsa as a youth, graduated from Booker T. Washington High School in 1932.

London said Williams’ name came to the museum’s attention when it reached out to the public, looking for local Tuskegee ties.

“We had a visitor who came out one day, and she told us about Yancey,” he said. “She said her parents had had a grocery store and that he used to work there.”

From Tulsa, Williams had gone on to study engineering at Howard University. While there, he earned a private pilot’s license.

But in 1941, his attempt to join the Army Air Corps was denied solely because he was Black.

Williams then filed a federal lawsuit along with the NAACP and fellow Howard student Spann Wilson.

The government responded by approving a segregated unit based at Tuskegee.

Out of that program, which trained Black pilots and ground crews, the 332nd Fighter Group went on to fly more than 1,800 missions in WWII.

Along the way, the airmen both proved and distinguished themselves.

“Time and time again they took on the most important missions, the most dangerous, and with a fearless mindset,” London said. “Also, they knew how to get the most out of their machines. They were well-trained at Tuskegee.”

The exhibit tells that story through a series of panels. It also includes scale models of some of the aircraft, along with items donated by a former museum docent who attended Tuskegee.

As for Williams, he earned his pilot’s wings in 1944. He did not go overseas, and not much is known about his life after that. At the time of his death in 1953, he was an Air Force major.

Would the Tuskegee air program have happened without Williams’ lawsuit? It’s impossible to say. But his role clearly was pivotal.

London believes there are several reasons why Williams has gone overlooked for so long.

He died young, for one thing, and at a time when Black contributions were mostly ignored.

And while the Tuskegee Airmen are well-known as a group today, it’s only been more recently that attention has focused on some of the individuals, London said.

It’s time for more people, especially Tulsans, to know about Williams, he said.

The exhibit should also give visitors a better understanding of the legacy of the Tuskegee Airmen, London added.

They broke barriers and helped win a war, but it didn’t end there. Many of them went on to successful careers both in and out of the military.

The exhibit was funded by Oklahoma Humanities, The Ed Darby Foundation, The Bernard and Marcy Robinowitz Family Fund, and Barbara and Allen Smallwood.

How can 22-year-old Miss Oklahoma know what it's like to be a senior citizen?

Although she’s about 60 years younger than the average resident, the current Miss Oklahoma, Megan Gold, is living at Covenant Living at Inverness, a sprawling retirement community on West 71st Street.

A nationwide effort by Trump supporters to undermine trust in the election process appears to have escalated, and officials think an event held last month in in Springfield, Missouri, could be to blame.

The Tulsa County Election Board is down 350 to 400 precinct workers from what it will need for the November elections, and it is looking to local municipalities for help.

Michael Jerome Jager, 51, was not wearing a seat belt and was ejected in the single-car crash, the Oklahoma Highway Patrol reported.

A woman was killed and another woman and three children were involved in a crash Monday afternoon involving a city of Tulsa truck in north Tulsa.

The studies indicate higher likelihood for college enrollment, higher earnings potential and increased civic engagement compared to their peers who never got through pre-K.

Visitors view items near the “Tuskegee Legacy” exhibit at the Tulsa Air and Space Museum on Friday.

Yancey Williams of Tulsa is featured in the "Tuskegee Legacy" exhibit at the Tulsa Air and Space Museum.

Starting this week, visitors to the Tulsa Air and Space Museum will be able to learn more about Tuskegee pilots when the museum unveils its new “Tuskegee Legacy” exhibit. A ribbon-cutting is set for 2 p.m. Tuesday.

Starting this week, visitors to the Tulsa Air and Space Museum will be able to learn more about Tuskegee pilots when the museum unveils its new "Tuskegee Legacy" exhibit.