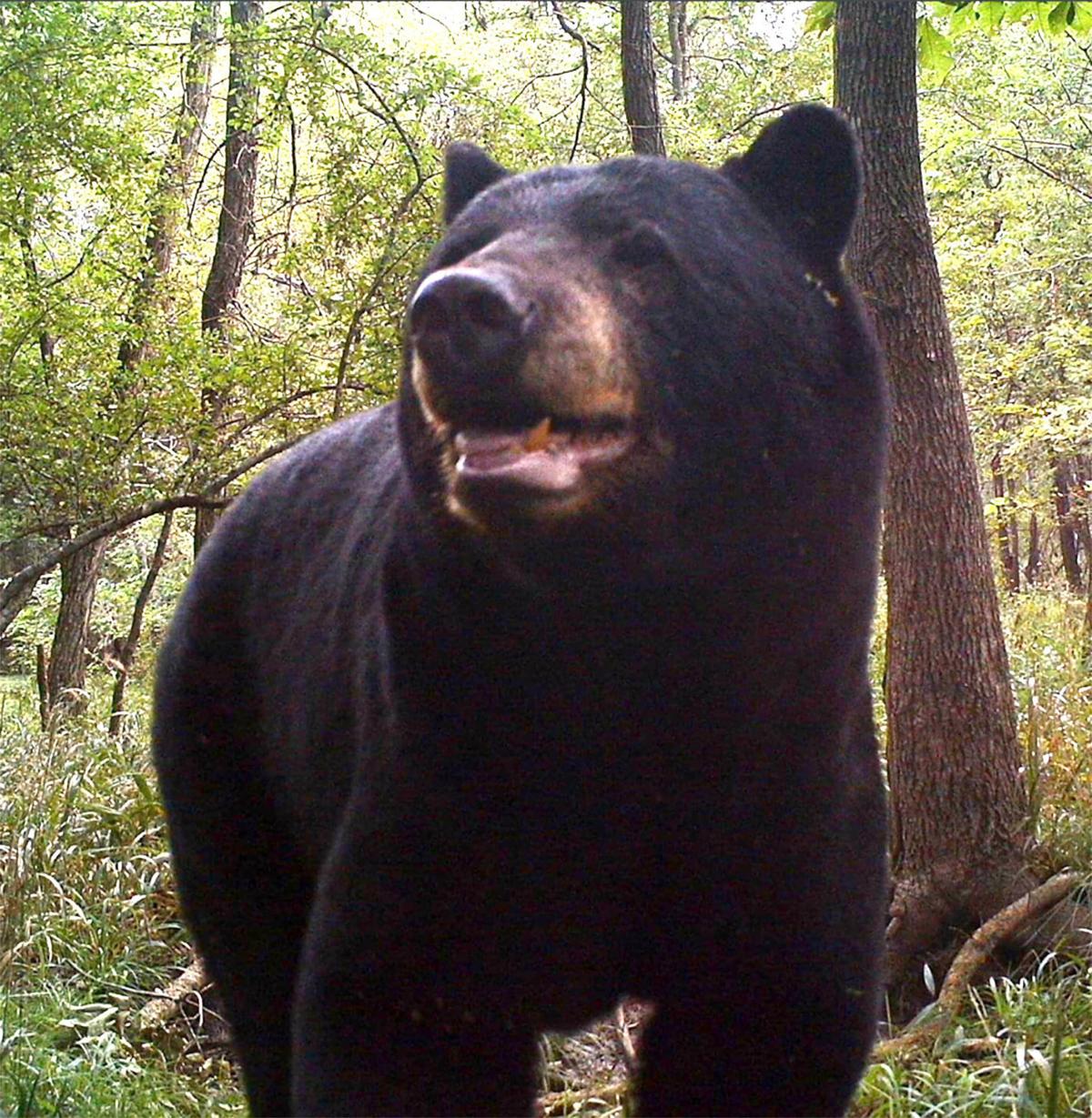 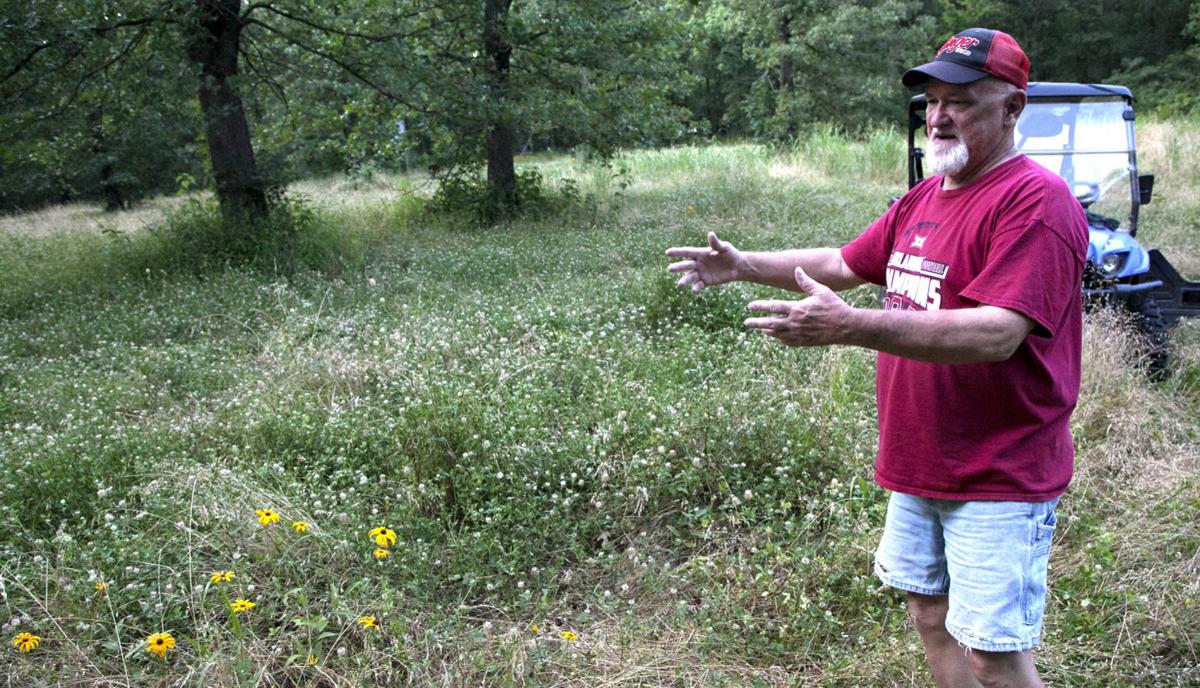 Norman Barton Jr. talks about bear tracks through a food plot where the bears eat clover about 150 yards from his Cookson area home. 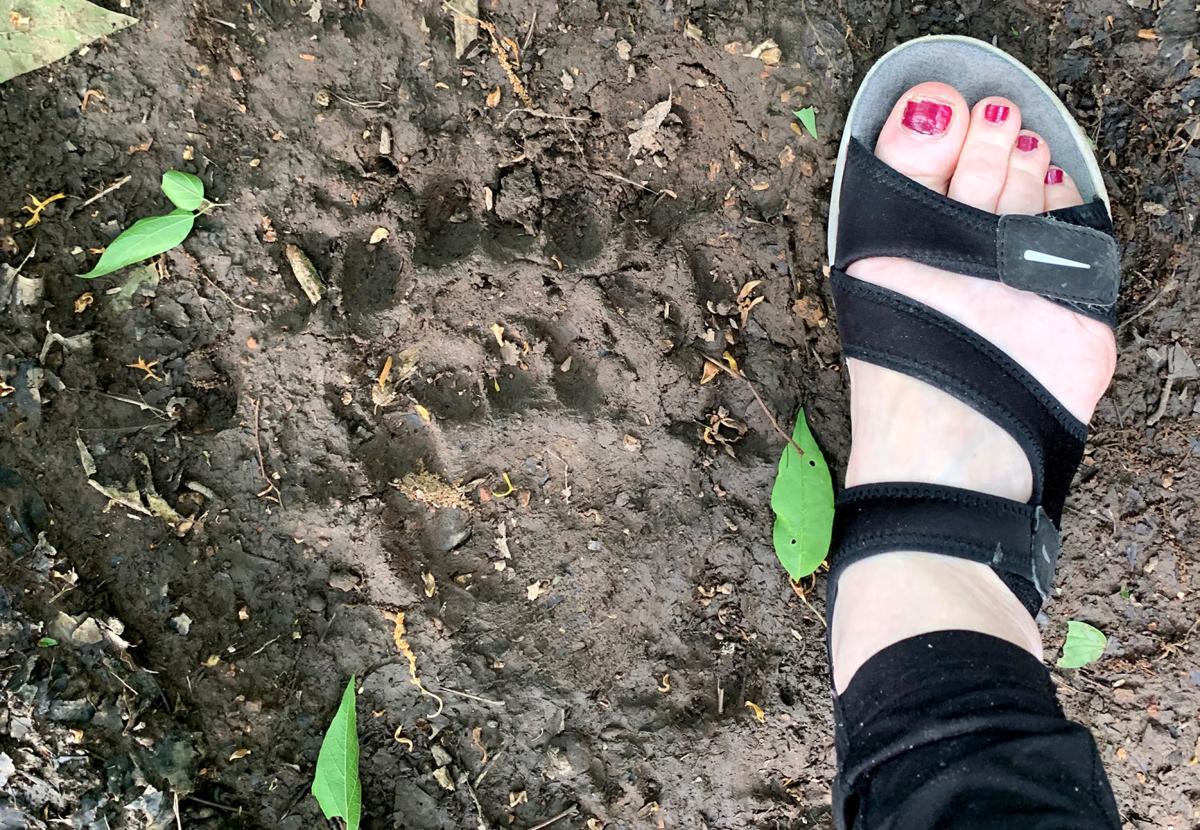 Carly Barton shared a photo she took of her foot next to the track of a sow and cub bear in the mud near her family’s Cookson home. CARLY BARTON/Courtesy 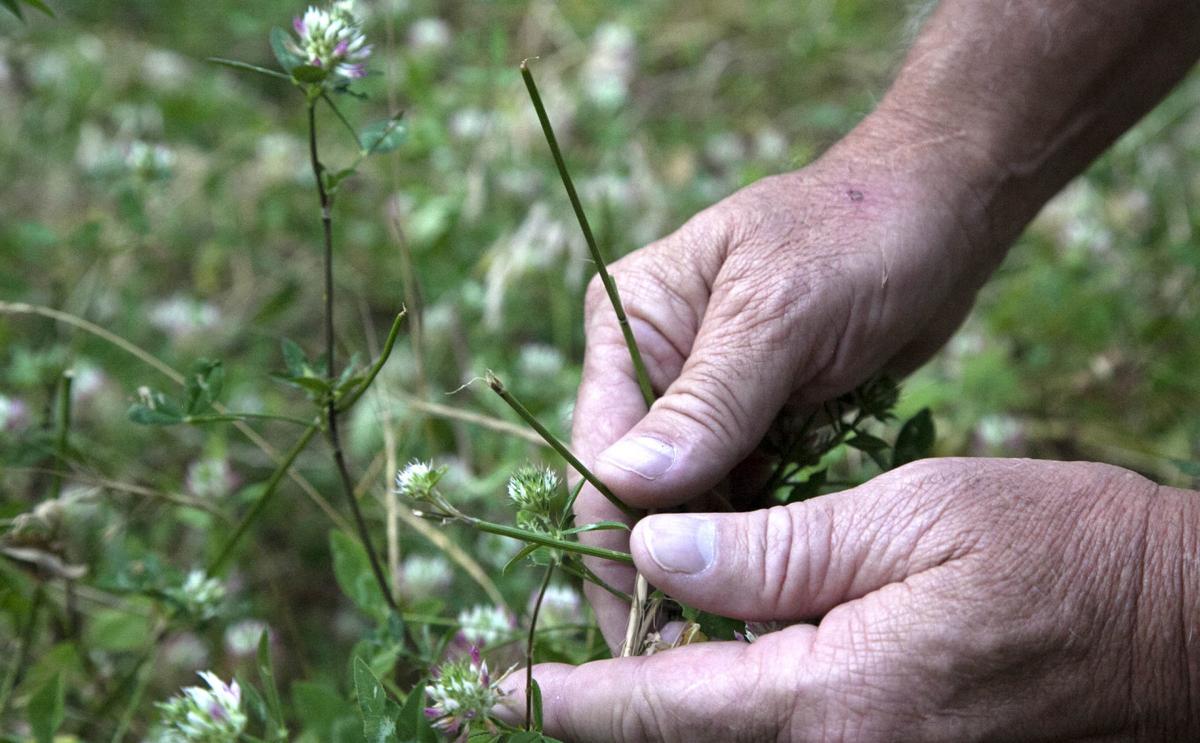 COOKSON — The shotgun and rifles leaned up against the living room wall and the baseball bats leaning against the house outside the front door indicate Norman Barton Jr.’s feelings about black bears these days.

“We’re fed up,” he said with three other nearby residents sharing similar feelings.

They said they want their feelings known about the area where they live, just about 3 miles east of Lake Tenkiller, and said they don’t believe the Oklahoma Department of Wildlife Conservation has been responsive to their concerns.

“There are too many and they are getting so they just aren’t afraid of people,” said Barton, who retired from the Department of Tourism a few years ago.

“I have to stand at the door with a gun so my wife can walk to her car. The kids can’t play outside ... My daughter was bottle feeding kittens the other day and she hears a low growl from the dogs and looks up and here’s a black bear looking at the dogs in their kennel right out here,” he said.

Three times just this year bears got too close and, at the direction of Wildlife Department biologists, he peppered their backsides with a blast of bird shot from the old family heirloom 28-gauge.

“The next day they’re right back again,” he said.

The story is the same on other properties, not just theirs, the men said.

They’ve been stuck in tree stands during deer season with bears that refuse to leave them alone. They’ve been surprised while turkey hunting and they often have two or three bears at a time in their yards.

There should be a hunting season in the area to thin the population and help make bears more wary of human activity, they say.

The Oklahoma Department of Wildlife Conservation issues guidelines that show people how to make their properties unattractive to bears, and recommendations Barton shared from area Wildlife Department biologist Curt Allen that are consistent with those guidelines.

The biologist told him to take down the feeder nearest his home; make sure no attractants like pet foods or bird feeders are available near the house; erect electric fences around animal pens or other places bears like to nose around; make noises such as banging pots and pans whenever bears show up; and pepper those that get within 25 yards with bird shot.

“The idea they want me to run around banging pots and pans says to me they just don’t really care,” Barton said.

Senior wildlife biologist Jeff Ford and Oklahoma State University senior research specialist Sara Lyda both said the refrain from the Cookson neighbors is similar to what residents went through as the black bear population expanded in the state’s Southeast region. Hunting opened there in 2009.

“Eventually people learned and adapted,” Ford said. “I will see a bear in my yard once or twice a year.”

Most of the times bears were a problem it usually was due to garbage, a food source or smells of food sources that kept attracting them, Ford said. Even hummingbird feeders and bird feed can attract them. Often people don’t fully appreciate just how little it takes to keep them coming around to look for an easy meal, he said.

Lyda, who has 20 years working with black bears — including on the Cookson properties in question — said she knows residents struggle to adapt to life in bear country.

“I can understand the frustration,” she said. “It really can be frustrating to have to alter your life to deal with an animal that is so dexterous and clever and curious and so hungry. It’s a challenge and it can be very frustrating, time consuming and costly.”

Barton shuts down his corn feeders when the countryside greens up, but last week he showed where the bears still come around to eat the sweet blooms off the clover that grows tall in the off season on a food plot about 150 yards from his house. He has dogs, chickens and cats around the house and it’s not like he can just stop feeding them, he said.

Between them, the men own and hunt roughly 2,000 acres of forested property. From their many trail cameras, they estimate there are 50 to 100 bears on their lands at any given time.

“We don’t hate the bears and we don’t want them all gone, they are just getting to be too many and they aren’t afraid of anything,” Oliver said.

Lyda said the current black bear population estimate for a northeast region that covers many thousands of acres in Sequoyah, Adair and Cherokee counties is about 110 to 140 bears with satellite tracking data that shows some males have a home range of more than 100 square miles.

She acknowledged there are “hot spots” on places like the Bartons, where the bears find good habitat management, safety away from roads and the food plots.

One of several studies the university has carried out with Wildlife Department funding since 2011 includes one that focuses on “social carrying capacity,” she said.

“Basically, at what point is this population to the point that people feel it’s over-populated? Not so much from the population numbers and habitat but at what point do people perceive them to be a menace,” she said.

So far, even with her knowledge of the Bartons, Olivers and Lanes, the study shows people like having the bears around, she said.

While the population seems to be stable it is not growing and studies show the ratio of females to males is poor, Lyda said.

“I’ve told people many times if male bears had antlers like deer there could be a season, but we can’t open a season and be assured we won’t take any females,” she said. “Taking even one female would be detrimental to that population at this point.”

Reports of wandering bears are common in May as young males are kicked away from their mothers ahead of the breeding season.

Bears are active in the breeding season in in June early July and may congregate.

August is a high time for bear reports because vegetation dries and becomes unpalatable and they seek other food sources.

Bears most often risk exploring near a home when there are attractants such as bird feeders, deer corn feeders, bee apiaries, pet food or other items available.

Residents should never feed wild bears, should make sure garbage is kept in sealed containers and that pet food is not left outside.

Trash containers should be rinsed with ammonia to eliminate odors.

Cooking grills should be thoroughly cleaned or kept inside.

Take down bird feeders in summer and early fall.

Use electric fencing to protect livestock, poultry and bee apiaries.

Oklahoma Game Wardens should be contacted immediately in the case of a bear that seems aggressive or unafraid of people, said Nathan Erdman, Wildlife Department law enforcement chief. Lethal action against a bear is allowed only in the act of preserving life or saving livestock, he said.

Elephant breaks into kitchen wall looking for snacks in Thailand

Elephant breaks into kitchen wall looking for snacks in Thailand

8 children in van killed in crash in Alabama

8 children in van killed in crash in Alabama

Norman Barton Jr. talks about bear tracks through a food plot where the bears eat clover about 150 yards from his Cookson area home.

Carly Barton shared a photo she took of her foot next to the track of a sow and cub bear in the mud near her family’s Cookson home. CARLY BARTON/Courtesy