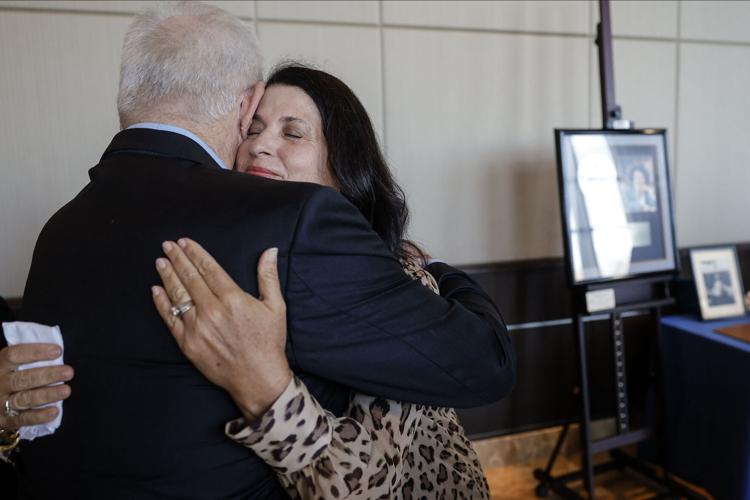 Melissa McNamara Luellen receives a hug from University of Tulsa Athletic Director Rick Dickson after a celebration of life for her mother, former TU golf coach Dale McNamara, at TU on Monday. 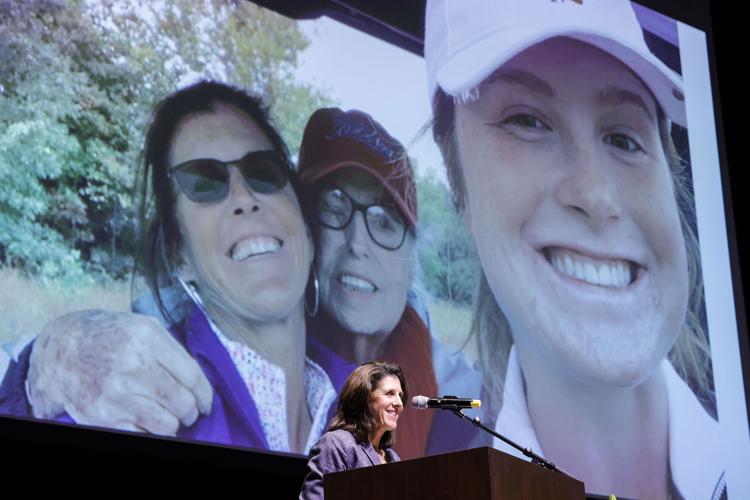 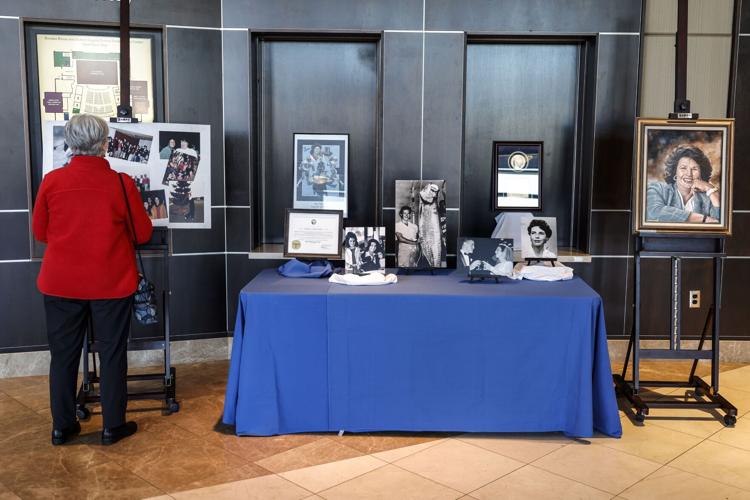 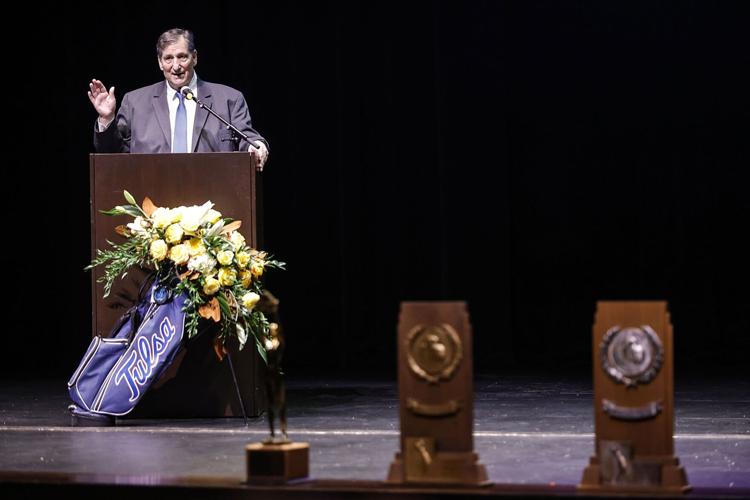 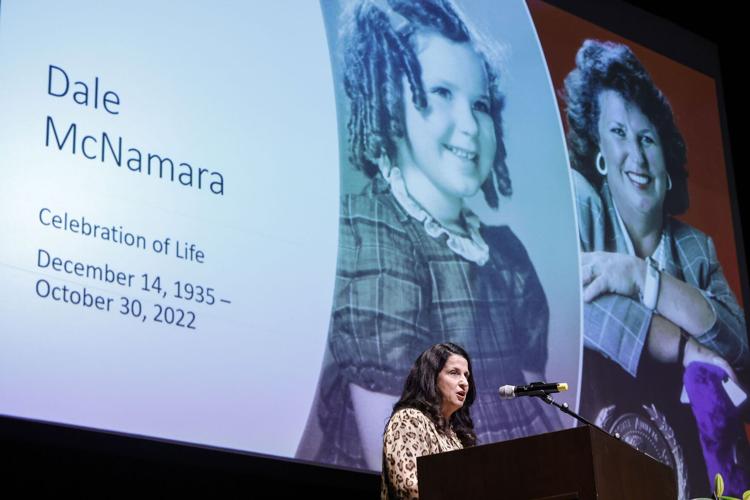 There were tears and laughter, some profound lessons, and one overriding theme Monday: Dale McNamara touched a lot of people’s lives, in golf and in the Tulsa community in general.

The event Monday afternoon at the University of Tulsa Lorton Performance Center to celebrate the life of one of TU’s biggest sports legends made it clear just how influential the former TU golf coach was.

McNamara died Oct. 30 at age 86 after a second bout with cancer.

Many pictures of McNamara were set up in the lobby, with various trophies she had won also on display, celebrating the pioneer who started the Golden Hurricane’s women’s golf program from scratch in 1974 and coached the team from its inception until 2000.

McNamara also served as assistant athletic director during much of that time. Along the way, she led the squad to four national championships, including two — one in the last year of the AIAW and one in the NCAA — in 1982.

McNamara’s daughters, Cathy McNamara and Melissa McNamara Luellen, each shared stories about their mother, tracing the trajectory of her life, from learning golf as a child with her father, to playing on tour as an amateur (she won seven amateur titles) and how she learned lessons such as maintaining inner confidence, which she passed on as a coach to all her players.

Luellen also discussed her relationship with her mother while playing for her on TU’s 1988 national championship team, when she also won the individual title.

Several other people remarked at the service about different parts of McNamara’s life and the lessons she imparted on them. Former TU golfer Maggie (Kelt) Roller, also a member of the 1988 national championship team, recalled many aspects of McNamara’s personality.

Susan Neal, executive director of the Gilcrease Museum, spoke about how much McNamara helped secure funding from the city for both the museum and other Tulsa city parks in recent years as she remained active in the community. She got a laugh when she compared McNamara’s wisdom in negotiating at city meetings to the Star Wars character Yoda.

Luellen said afterward that hearing the stories about her mother was “very emotional, very rewarding.”

“We asked the folks to speak of different parts of her life, and I think a lot of people learned a lot about her life that they didn’t know about, other than the golf part, so I thought that was really neat,” she said.

Tulsa won the 1980 and ’82 titles in the Association for Intercollegiate Athletics for Women, the governing body for women’s collegiate athletics until 1982, when it disbanded and the National Collegiate Athletic Association assumed governance of large university women’s sports — but not before both organizations staged national tournaments in ’82, and Tulsa won both of them in women's golf.

The Hurricane went on to claim another NCAA title in 1988 and finished second five different times under McNamara’s leadership, including by one stroke in 1989.

McNamara was named the 1985 National Coach of the Year after Tulsa won eight of 13 tournaments and finished second at the NCAA Championship. She was a 1996 inductee into the TU Athletic Hall of Fame and was inducted into the Women’s Oklahoma Golf Association Hall of Fame in 2006.

Luellen, who had been out on the LPGA tour, came back to Tulsa to coach women's golf after McNamara stepped away from coaching in 2000. Just a couple of years later, Luellen left to coach Arizona State, where she led the Sun Devils to the NCAA Championship in 2009 before moving on to Auburn in 2015, where she is still the head coach.

She acknowledged that she has incorporated many of her mother’s tactics into her own coaching but has put her own personal spin on them.

“I had to kind of find my own style,” Luellen said. “My philosophy’s the same, but probably the way I go about it is a little bit different. It’s not a dictatorship for me, but it was for her — but it was the way of the times. ‘Don’t ask why. Just say, “Yes, ma’am.”’ They don’t go for that (now).”

Virtually all of McNamara's former players kept in touch with her after they left Tulsa, and many of them showed up for the celebration.

Stacy Prammanasudh, a three-time First-Team All-American at TU (1999, 2000, 2002) at the end of McNamara’s tenure and the beginning of Luellen’s, called the event “a walk down memory lane.”

“Just a good remembrance of some of the greatest moments of my life. To celebrate somebody so incredible who also formed a lot of what I’m benefiting a lot from in my life is really special,” Prammanasudh said while dabbing tears from under her eyes.

She gave McNamara a lot of credit for the success she had on the LPGA tour over the course of a 13-year pro career and what that allowed her to achieve in life.

“I was some little poor little girl from a no-class family in Enid that she believed in and saw something more in, and I’m where I’m at today in my life because of her belief,” Prammanasudh said.

“She brought me to Tulsa. I never thought about professional golf until playing for her. She would dangle the carrot, and then Melissa was out on tour at the time, so I had that sounding board as I came into the last couple of years of my career here at TU, and my career took off, and now I’m able to be retired and stay home with my kids right now and be the mom that I want to be.”

Jody Rosenthal, a First Team All-American at TU in 1983, ’84, and ’85, flew into Tulsa from her home in Arizona for the celebration.

“There was no doubt that I would come to be a part of this, just to support Cathy and Melissa,” said Rosenthal, who was also a contributor to the 1982 double-national championship squad. “Just what a legacy I think we heard all about today. What a life.”

Rosenthal, who spent 18 years on the LPGA tour and had two career wins, also felt like her time with McNamara set her up for success the rest of her life.

“She prepared us so well no matter what we would have done — golf, or whatever, family,” Rosenthal said. “Never had any doubts and could always plug back in and get advice.”

“She was loved, respected, admired,” Luellen said. “She was a forceful person with not many role models at that time. She didn’t have many role models, so she became a role model for many. She forged her own path.”

Dale McNamara for Her World 3

Dale McNamara for Her World

Reba McEntire comes home for grand opening for Reba's Place: 'I just wish Mama and Daddy were here to see it"

18-year-old from Owasso dies in collision

The driver, Vladislav Soden of Owasso, was pronounced dead at the scene by EMS.

Oklahoma Republicans banned most abortions. Now they want to carve out exceptions

After enacting some of the nation's strictest anti-abortion laws, Republican lawmakers are now seeking exceptions to legalize the procedure in rare situations.

Tulsa Public Schools announced late Sunday night that all of its campuses and offices will be closed Monday due to weather. #oklaed.

Netherlands may supply Leopard 2 tanks to Ukraine to fight Russia

Netherlands may supply Leopard 2 tanks to Ukraine to fight Russia

Melissa McNamara Luellen receives a hug from University of Tulsa Athletic Director Rick Dickson after a celebration of life for her mother, former TU golf coach Dale McNamara, at TU on Monday. 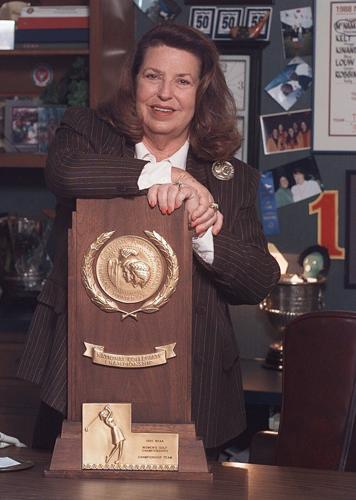