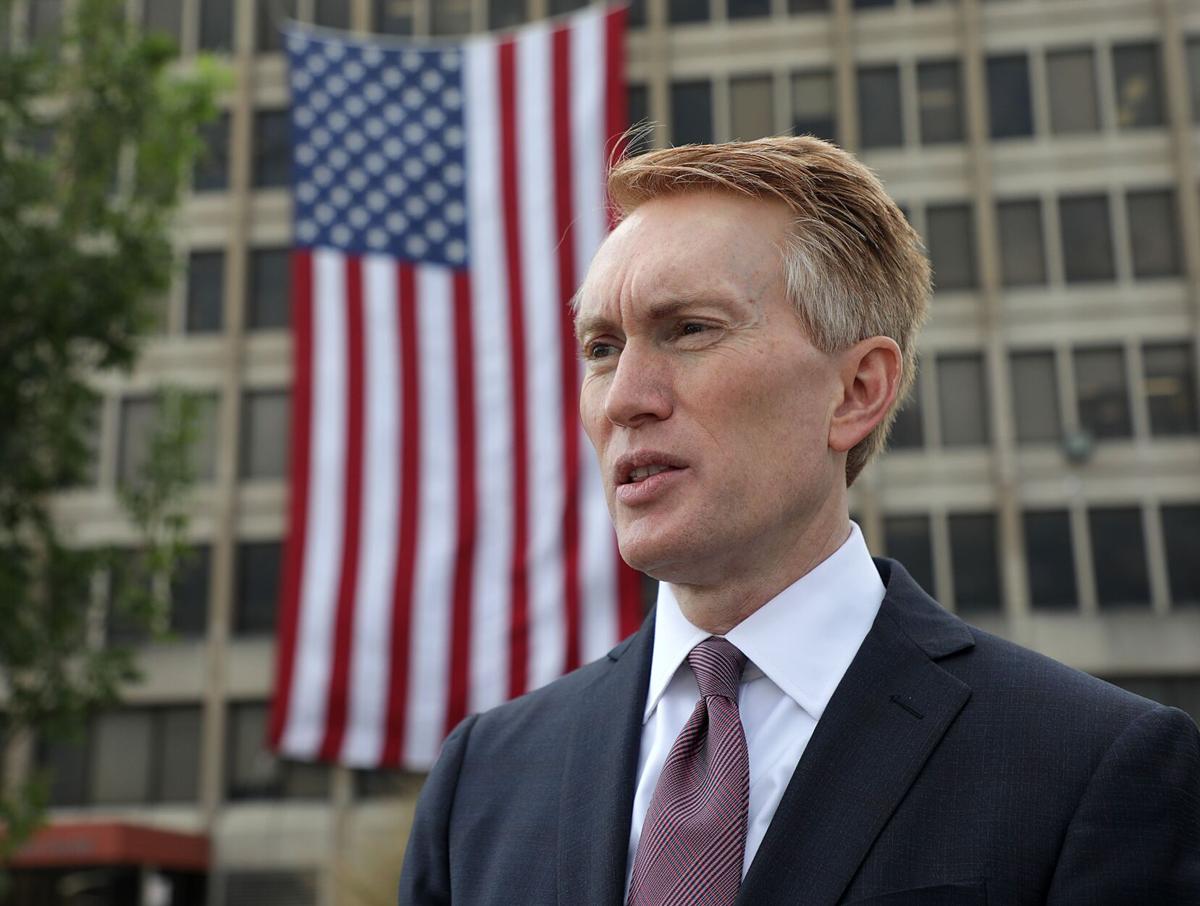 James Lankford speaks to journalists before a groundbreaking ceremony for the new Veterans Hospital in Tulsa on Friday. The U.S. Senator’s primary opponents Jackson Lahmeyer and Nathan Dahm have attempted to brand him as a Republican in Name Only. 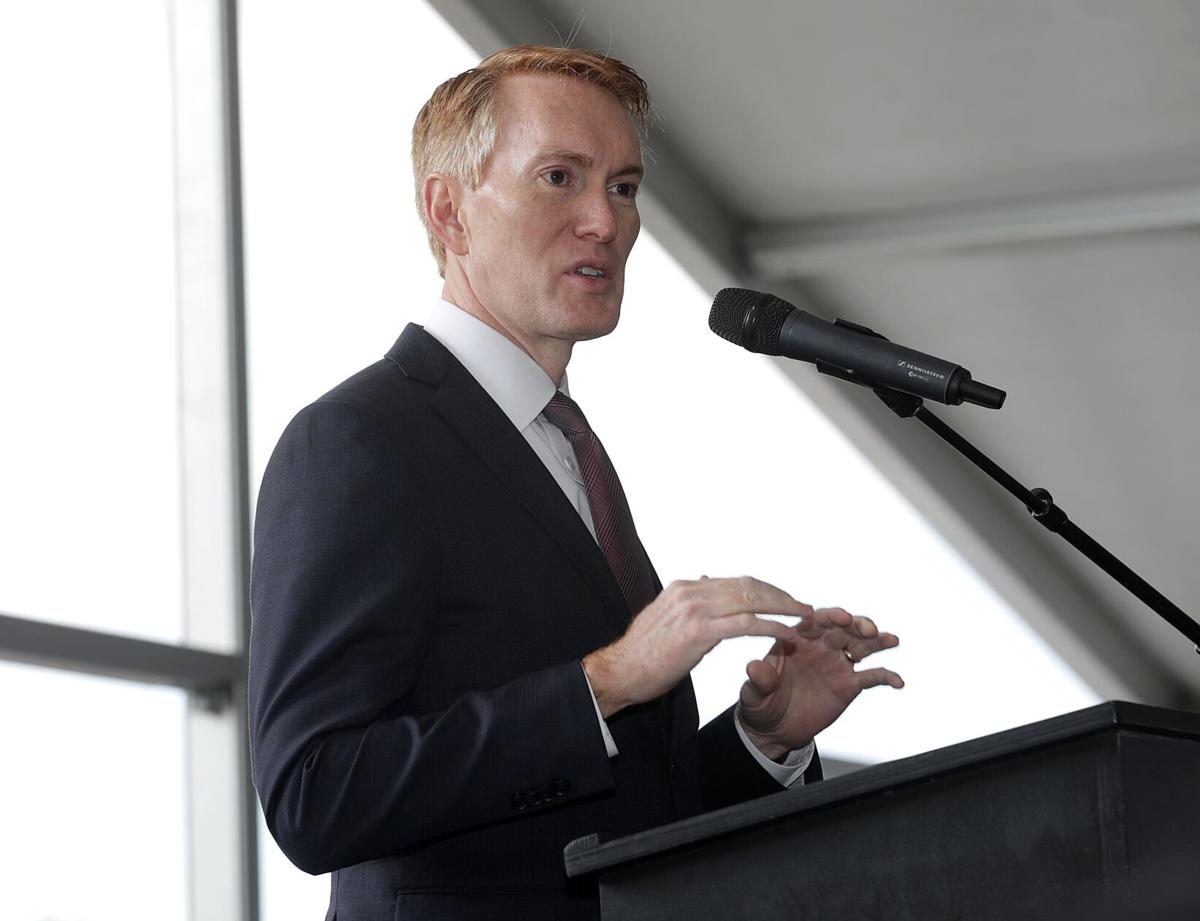 Senator James Lankford speaks during a groundbreaking ceremony for the new Veterans Hospital in Tulsa Friday, Oct. 15, 2021 in Tulsa, Okla.

U.S. Sen. James Lankford made a small gesture, as if to indicate “What can I say?”, when asked how he feels about being called a RINO.

Republican in Name Only is the horse collar Lankford’s announced primary opponents Jackson Lahmeyer and Nathan Dahm are trying to hang around his neck.

Because Lankford did not vote to overturn Joe Biden’s election as president, they contend, and because he apologized to some Black constituents for saying something that offended them, says Lahmeyer, he’s not a real conservative.

“When all of this started, we’d just returned to the Capitol,” Lankford said while in Tulsa last week. “Dick Durbin of Illinois, who’s a true liberal, crossed the aisle, walked over to me, and said, “You’re not a conservative?”

Lankford won more votes than Donald Trump in winning re-election in 2016, and to date the attacks on him do not seem to have made a serious dent in his popularity among Republicans.

But, as the two major parties are pushed to the extremes, the meanings of conservative and liberal, Republican and Democrat, often seem more and more transitory.

“Most of it is not even rational,” Lankford said.

He acknowledged that some people may feel a little unmoored, their points of political reference uncertain.

“When I’ve heard somebody yelling about what’s conservative, I respond that being conservative is a set of ideals. It’s not volume,” Lankford said.

In any event, Lankford said he’s hearing the most from people who are upset about vaccine mandates. He himself is not anti-vaccine, but he is anti-mandate.

“Everybody has a different outlook,” he said. “Some of them say, ‘I would have considered it if there hadn’t been a mandate.’ Part of it is (being) a stubborn Oklahoman.”

Some individual employers are requiring their workers be vaccinated, and the Biden administration has proposed a workplace safety rule that would mandate vaccination or weekly testing for all businesses with at least 100 employees.

Whether it has that authority is unclear and almost certain to be decided in court.

Lankford said he’s also getting some questions about the Democrats’ 10-year, $3.5-trillion spending bill — or $350 billion a year.

As a comparison, total defense spending this year is about $750 billion. The Department of Health and Human Services, including Medicaid and Medicare, is $1.37 trillion.

But as one big package, the Democrats’ $3.5 billion proposal is unprecedented. Republicans hate it — but polling indicates Republican voters, at least, like quite a few of its pieces.

“The cost is a big deal, but there are some sections that are really a problem,” Lankford said.

Specifically, he said the “energy piece,” which among other things seeks to more than double, to 80%, the share of the nation’s electricity generated by non-carbon sources by 2030.

An August report by the Massachusetts Institute of Technology says the measure could “transform the US power sector — and slash climate pollution (but) ... will face tough tests in the real world. If it passes at all.”

The fossil fuels industry is naturally opposed, and many energy experts think the scheme is unrealistic and unworkable. People concerned about climate change — or with a financial stake in renewables — say it is absolutely necessary.

Lankford is also upset about elements he says undercut the American work ethic and what amounts to an expansion of the Internal Revenue Service’s ability to monitor financial accounts for tax cheats.

Lankford said the latter is too intrusive — financial institutions would have to report all transactions of more than $600 or, in alternative version, accounts with transactions totaling more than $10,000 a year.

Photos: A look back at Sen. James Lankford's career so far

Sen. Lankford's prayer at National Prayer Breakfast: 'Help us to... see people that we disagree with as people that were created by you, in value and worth"

Hofmeister: "As for the HB 1775 rules, the Oklahoma State Department of Education plans to follow the rulemaking process, as we always have." #oklaed

James Lankford speaks to journalists before a groundbreaking ceremony for the new Veterans Hospital in Tulsa on Friday. The U.S. Senator’s primary opponents Jackson Lahmeyer and Nathan Dahm have attempted to brand him as a Republican in Name Only.

Senator James Lankford speaks during a groundbreaking ceremony for the new Veterans Hospital in Tulsa Friday, Oct. 15, 2021 in Tulsa, Okla.