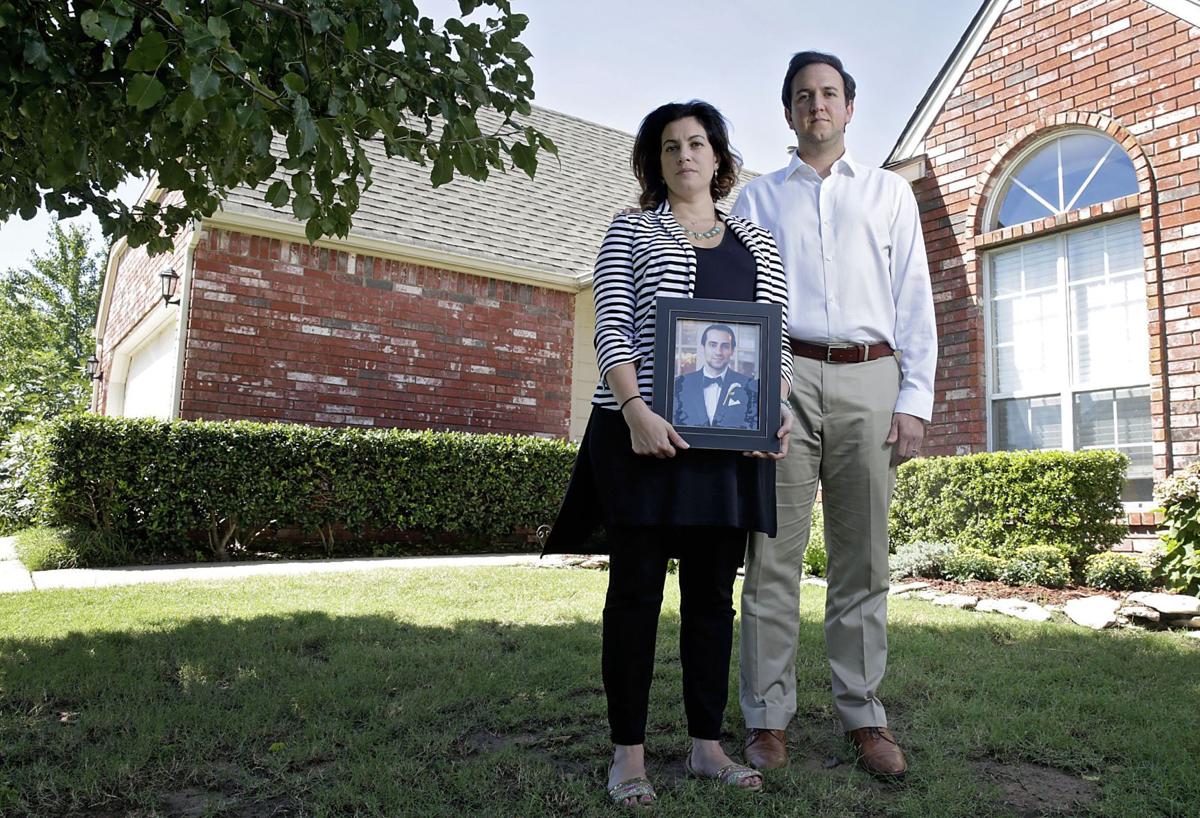 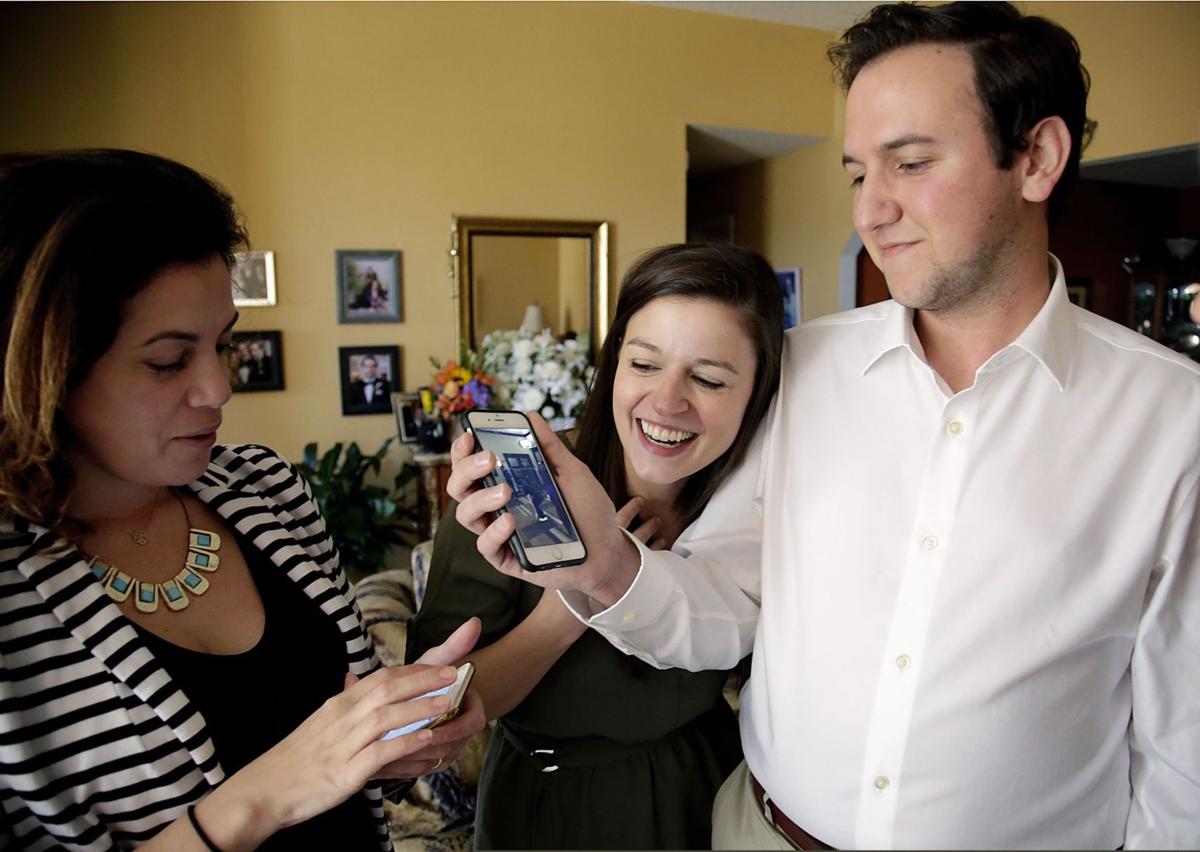 Khalid Jabara’s final acts, even after he was shot several times in the abdomen, likely saved the lives of two or three other people.

In their first sit-down interview, Jabara’s surviving family members said that is what they want the world to know about him. That he died in the same manner in which he lived — for others.

“He called me and said, ‘Mom, stay where you are — this guy we learned has a gun. Please stay away!’” said Haifa Jabara, Khalid’s mother.

She was still on the phone line with Khalid when she heard his killer’s chilling warning to him: “I heard, ‘I told you it’s coming!’ Like, I’m going to shoot you.”

Jabara, 37, was gunned down Aug. 12 on his front porch, according to police, by Stanley Vernon Majors, the same next-door neighbor awaiting trial on charges of running down Jabara’s mother with a car last year.

Jabara’s slaying has made headlines around the globe because it came after years of harassment of his Lebanese, Orthodox Christian family and the suspect who had reportedly called them “dirty Arabs,” “filthy Lebanese,” “Aye-rabs” and “Mooslems” — apparently assuming that they were Muslims.

Haifa was at a friend’s house when she got that fateful, final call from her son. But she is sure that Khalid prevented the shooter from gaining access into their house, in which rested Mounah Jabara, Haifa’s husband and Khalid’s father, who is elderly and in extremely poor health.

“He saved my life. Because if I came, definitely he would shoot me because he tried to kill me,” Haifa said, referring to the time in September 2015 in which Majors is charged with mowing her down with his car as she walked in their south Tulsa neighborhood.

Haifa said after her son was shot, she next heard her son’s repeated cries for help and then the screams of a female neighbor.

That neighbor has declined media interview requests as she copes with the trauma of the experience, but Jabara family members recalled the harrowing details she shared with only them and Tulsa police.

Tania Jabara, Khalid’s first cousin, reported that the neighbor said Khalid was already mortally wounded when she came upon the scene, and Khalid urged her to flee from the shooter.

“He told her, ‘Go away, go away! He has a gun! He has a gun!’ ” Tania Jabara said. “And he was already shot and then Majors was hiding behind Khalid and he came like this, (motioning to show a gun being pointed at the neighbor woman.”

“And he said (to the neighbor woman), ‘I’m going to f---ing kill you,’” Jabara’s older sister, Victoria Williams interjected.

They said what ended the confrontation was a second neighbor, a man, drawing his own gun and forcing the suspect to flee the scene. With the suspect gone, Victoria said the neighbor woman returned and held Khalid as he lay dying.

A couple of hours later, police found Majors, 61, hiding behind a tree at the nearby Hardesty Library and arrested him. He is being held without bond in the Tulsa Jail.

Victoria said her father Mounha Jabara, whose condition is so poor that he has been in and out of the hospital and nearly died earlier this year, was so traumatized that he has had difficulty recalling everything that transpired the evening of Aug. 12.

For example, he has no memory of his own, desperate 911 call after finding Khalid shot in the doorway of their home.

Victoria said Mounha is certain that Khalid had just returned after getting a car repaired at a shop. But he is not sure what prompted Khalid to go outside at the time of the shooting — whether Khalid went to get something out of the car or to check the mail — or something else entirely.

“We’ll never know. For my dad to find him, it was,” Victoria said, her voice trailing off. “My dad said he is his soulmate.”

To Victoria and Rami Jabara, the youngest of their family’s three children, Khalid was their best friend and family rock.

“He was fun and funny,” Victoria said. “He was also quieter and more sensitive than us, but the best-looking. All the girls loved him. Even now, we’ve been hearing, ‘Khalid was my first crush, or Khalid was my first love.’ But he didn’t know how handsome he was.”

Victoria and Rami shared laughs with Tania and Rami’s wife Jenna Carl Jabara as they recounted Khalid’s affinity for 1990s-era R&B music and his extraordinary talent for singing and impersonations.

Among his best impersonations were Kermit the Frog, Aaron Neville’s wavering vocals on the hit song, “Don’t Know Much,” and the speech synthesizer of a Speak and Spell, the first hand-held child’s computer of its kind popular when they were kids growing up in the 1980s.

“He would also make fun of my mom’s Arabic,” said Rami Jabara, chuckling at the memory. “He was like a one-man show. And he could dance!”

Tania traveled all the way from Hong Kong, where her American husband’s job took them two years ago, to be with her close-knit family.

“This man, I’ve never seen such a guy so nice, sweet, emotional, tender, as humble, handsome, beautiful inside and out,” she said. “I can’t imagine something such as this has happened in this tragic, horrific, unfair way.”

She also remarked about the irony of Khalid’s death in quiet south Tulsa, where the Jabaras sought refuge from civil war-torn Lebanon in 1983.

The family has embodied the American dream — becoming citizens, Haifa and Mounah establishing a successful catering business, and all three of their children graduating from idyllic Jenks Public Schools and matriculating to college.

“We never held any gun — even in Lebanon in the war, in our village. We are so Christian and devoted to the church,” Tania said. “They escaped from the war, from the horrific situation in Lebanon and then they end up in tragedy like this in a country they adore.”

Most devastating to the family are all of the things Khalid still had yet to do at his relatively young age — and the lives they will have to lead without him.

“I think he wanted to get married, to fall in love and get married,” Victoria said. “He was torn between loving my parents so much and helping them and wanting that.

“In middle eastern culture, if you’re not married you stay and take care of your family. He has been the rock because our dad has been in the hospital a lot the past year.”

Jenna, who only married into the Jabara family in December, choked back tears as she said she can’t help but think of the loss of Khalid as “the fun uncle.”

“He was so good with Vicky’s little girl,” Jenna said, starting to cry. “And Rami and I hope to have kids some day and they won’t have that.”

The Jabaras aren’t sure what, if any, legal recourse they will seek.

But they’re certain that the circumstances leading up to Khalid’s slaying demand an examination of how emergency responders and the judicial system treat crime victims with protective orders.

In the two hours before he was gunned down, Khalid placed two 911 calls to report hearing someone tapping on the window of his house, and then to inform police that he learned his neighbor, Majors, had obtained a gun and even fired it inside the house next door.

Tulsa Police responded an hour and a half after the first call and 50 minutes after the second, but left when Majors didn’t answer his door. Why?

According to police, because when the 911 dispatcher asked, “Do you want to talk to officers?” Khalid had responded no, because he didn’t want Majors to know he called the police on him.

Victoria said she didn’t know police couldn’t pursue the matter without the caller agreeing to be a witness and she doubts her brother knew that either.

She endured the upset of listening to the 911 calls made by her brother and father on Aug. 12 to help the family piece together the events that led up to the shooting. What she heard was fear in her brother’s voice, and when the dispatcher tried to transfer his call to non-emergency dispatchers, an uncharacteristic assertiveness.

“My brother is not aggressive like that, for him to say, ‘It’s an emergency!’ when they tried to transfer him,” Victoria said, shaking her head.

She said she also wonders whether 911 dispatchers or responding police were aware of the protective order in place against Majors — and the fact that he was a convicted felon out on bond on a charge of violating the protective order and assault with deadly weapon in the September 2015 case involving her mother.

When Majors was released on bond in late May, Khalid found out from his routine check of Oklahoma’s online court record system.

Victoria found a real estate agent to start showing her mother new houses so the family could find a new place at a safer distance from Majors. Rami purchased special security bars for every external door on his parents’ house and he and Jenna, both attorneys, started contacting the Tulsa County District Attorney’s office to encourage prosecutors to seek a review of Majors’ bond.

“We did everything we could to be advocating for our own victim family and we were diligent. What happens to the average victim?” Rami Jabara said.

More than 300 providers have been approved to offer COVID vaccines in Tulsa County, and Oklahoma officials expect no shortages of the vaccine for booster doses. A pop-up clinic will be offered at Tulsa State Fair.