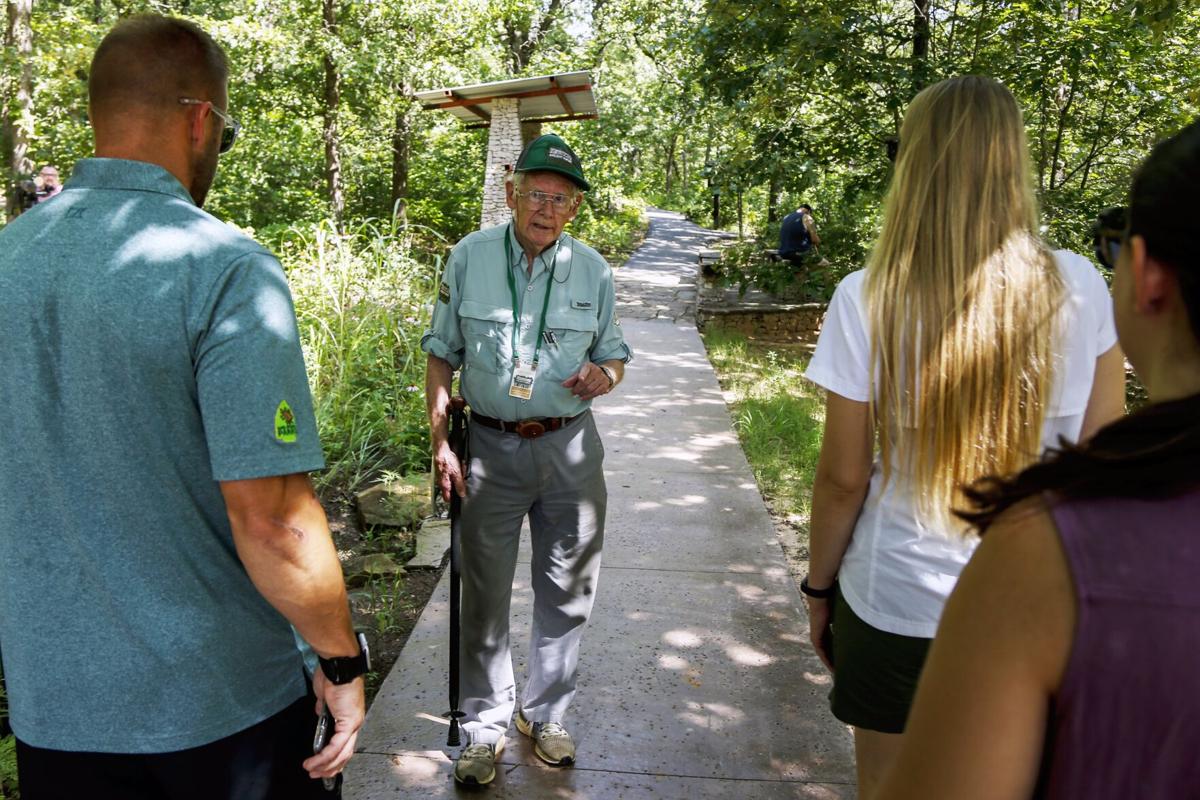 Jacques LaFrance guides a group on the Frank Trail at the Keystone Ancient Forest on Thursday. LaFrance has been a trail guide since the forest opened to the public in 2007. 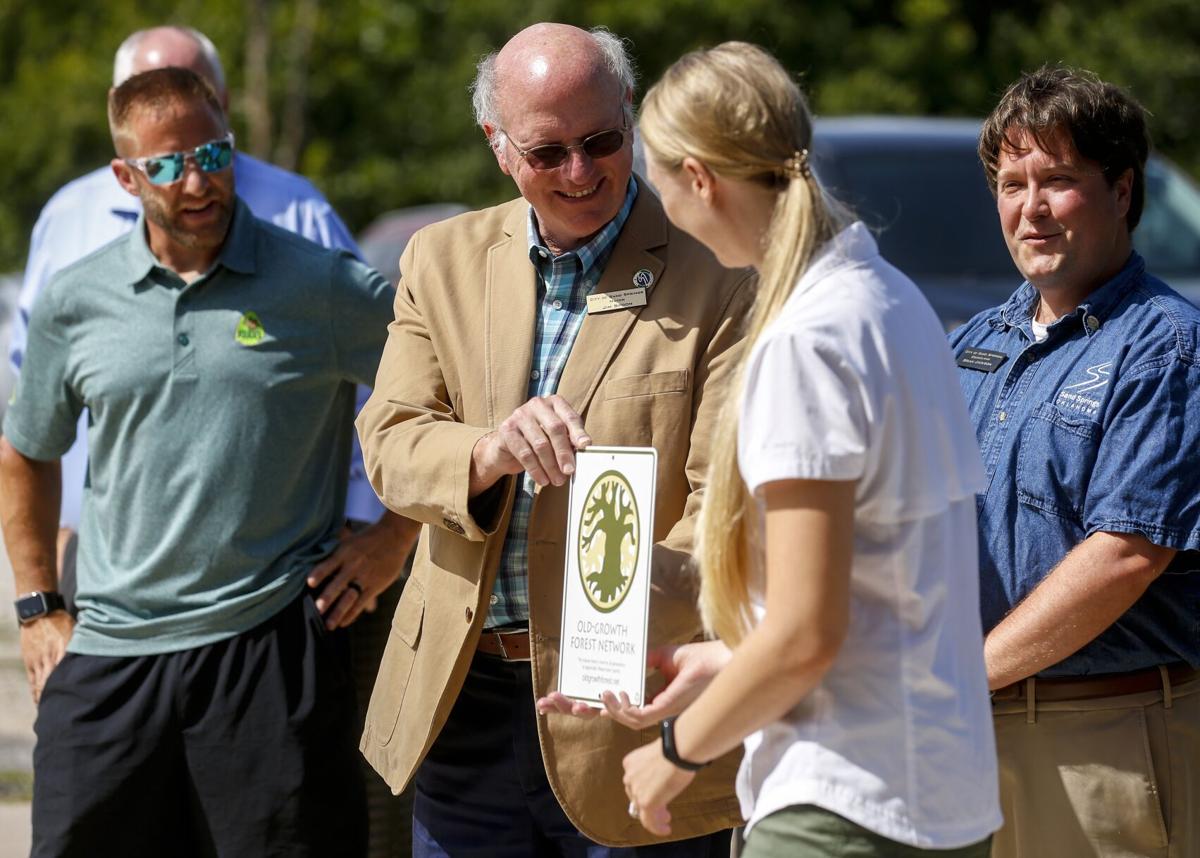 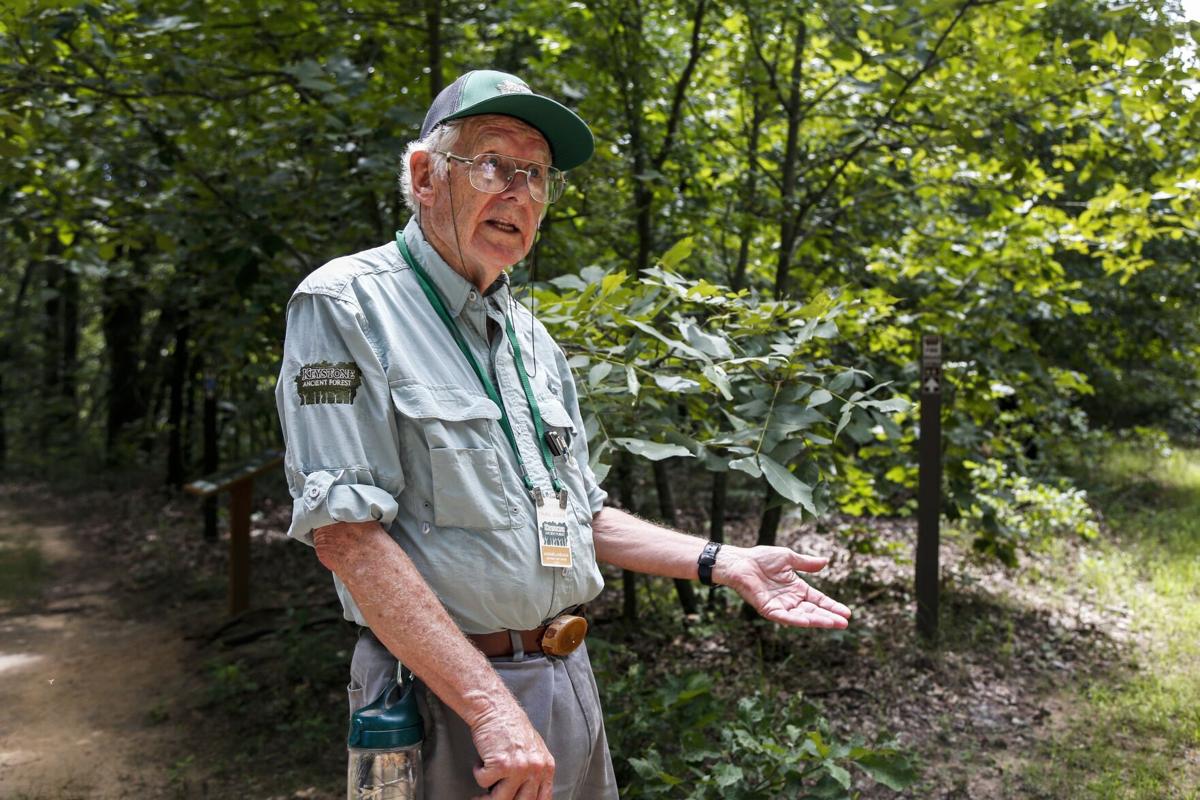 Jacques LaFrance explains old-growth areas at the Keystone Ancient Forest on Thursday. LaFrance is 82 and has been a volunteer and guide at the preserve for 14 years. 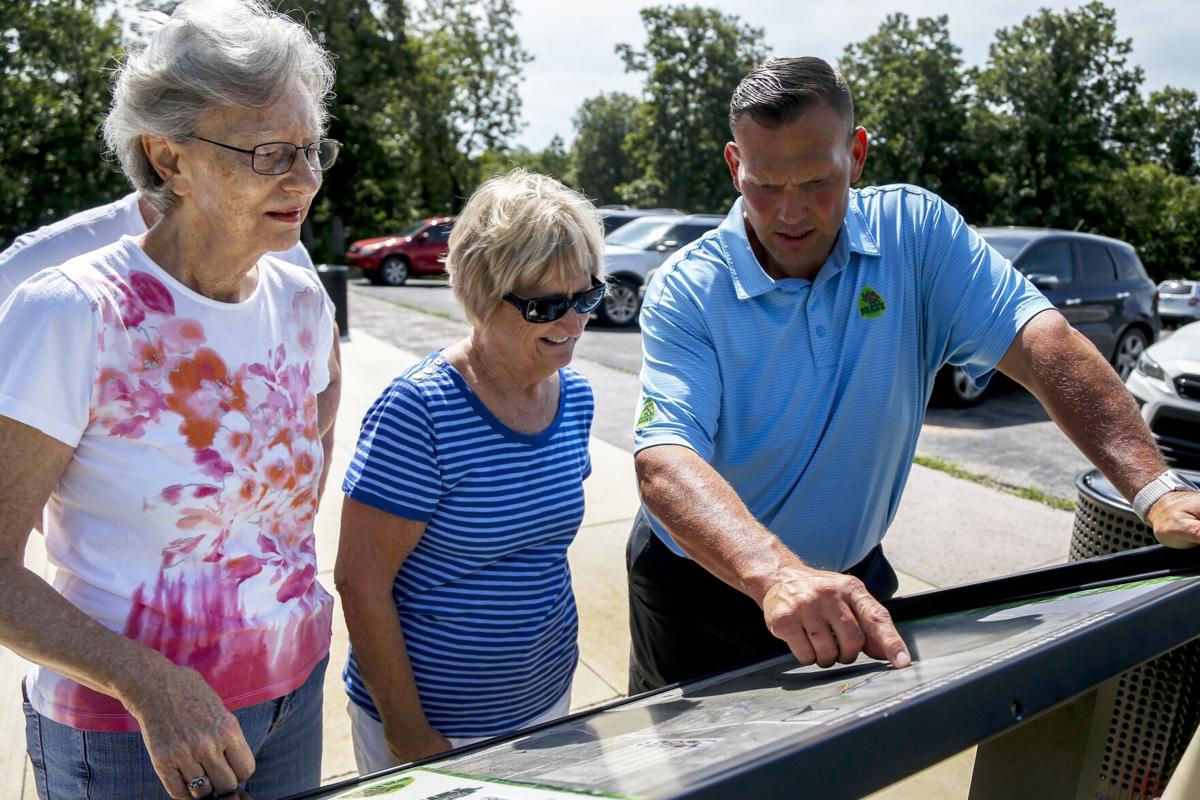 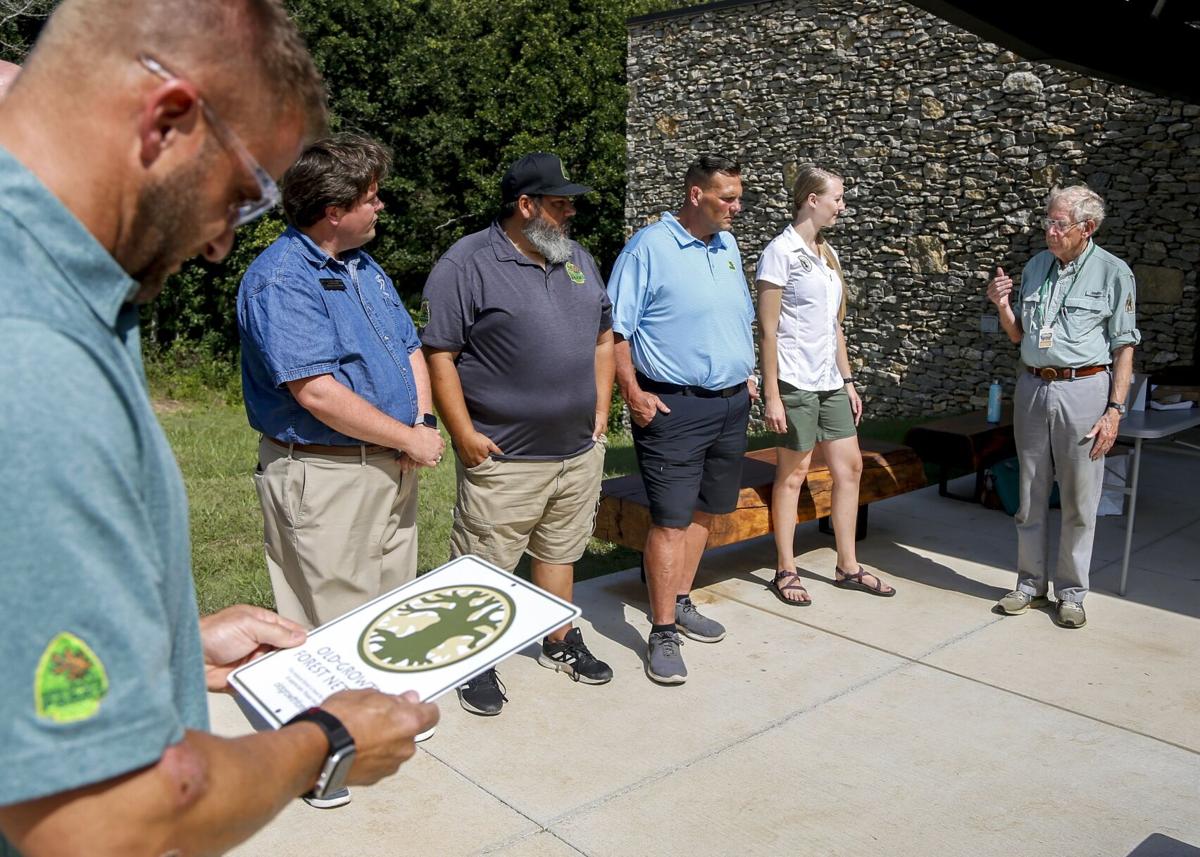 Jacques LaFrance (right), a volunteer and trail guide at the Keystone Ancient Forest, leads visitors on a hike Thursday after the induction of the preserve into the Old-Growth Forest Network. 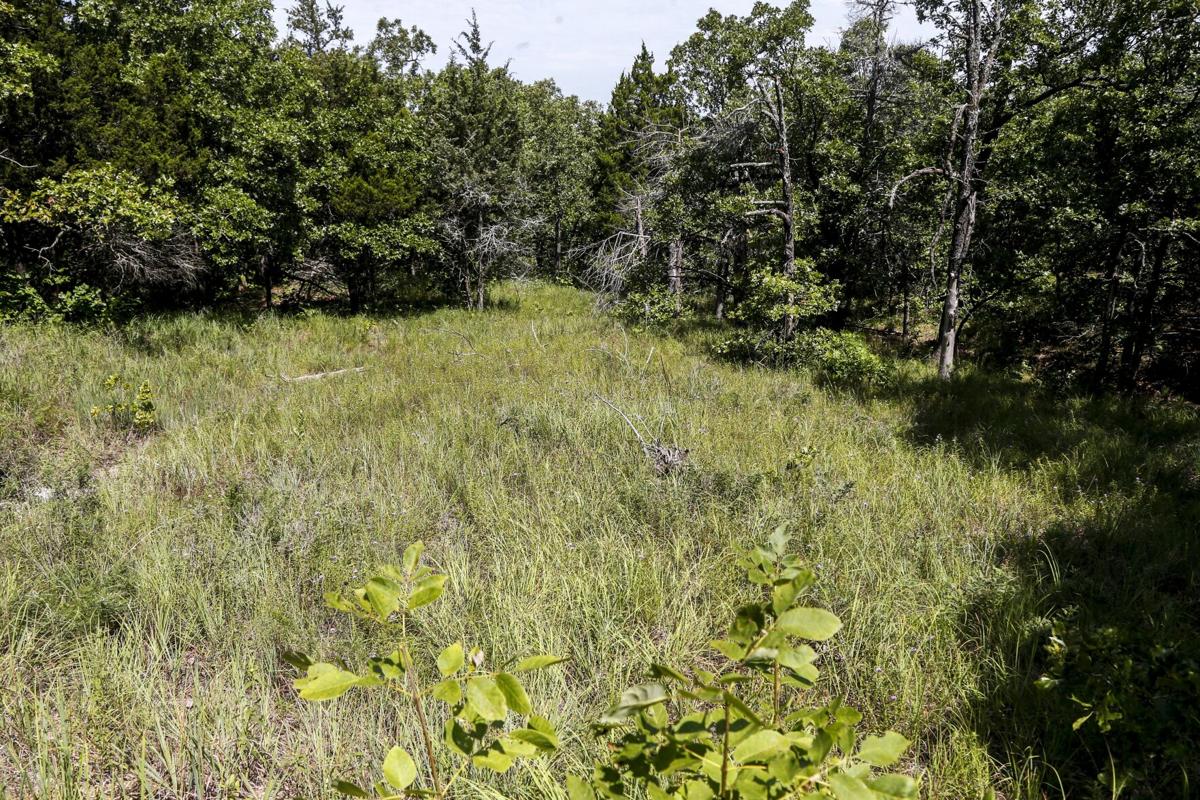 A natural prairie off the Frank Trail at the Keystone Ancient Forest is seen Thursday. 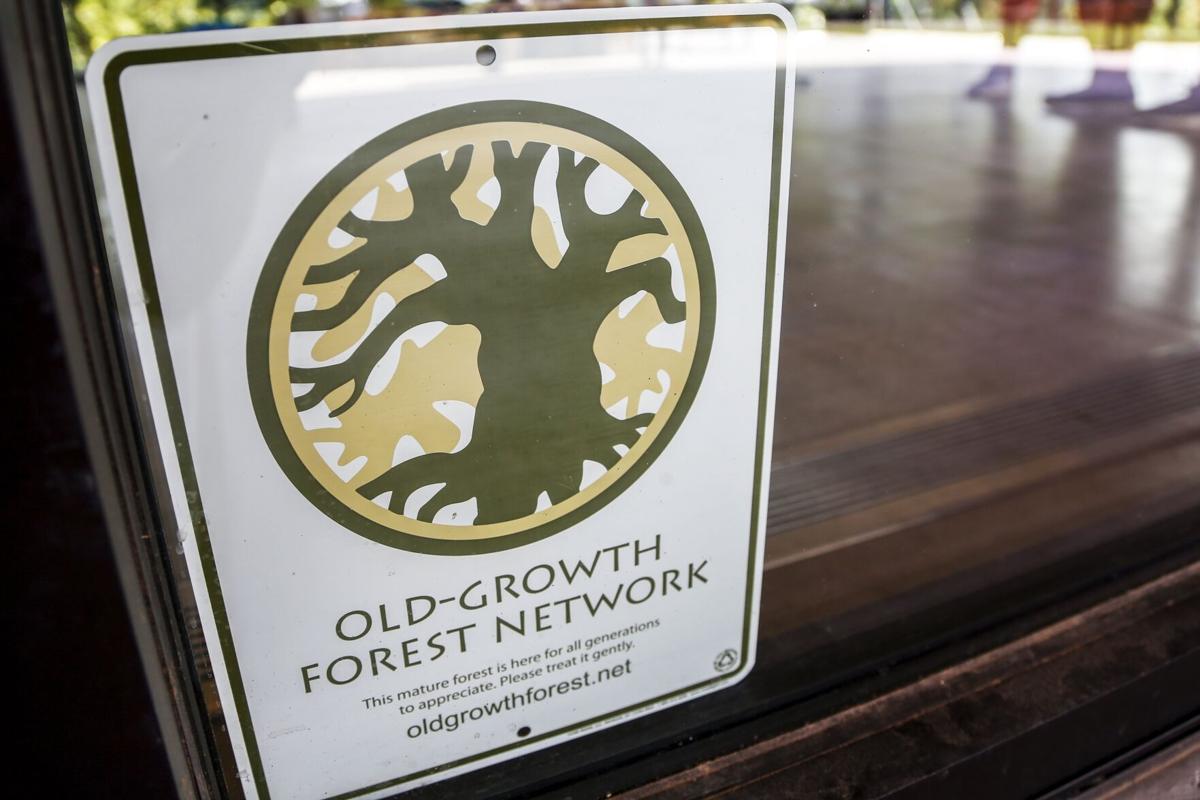 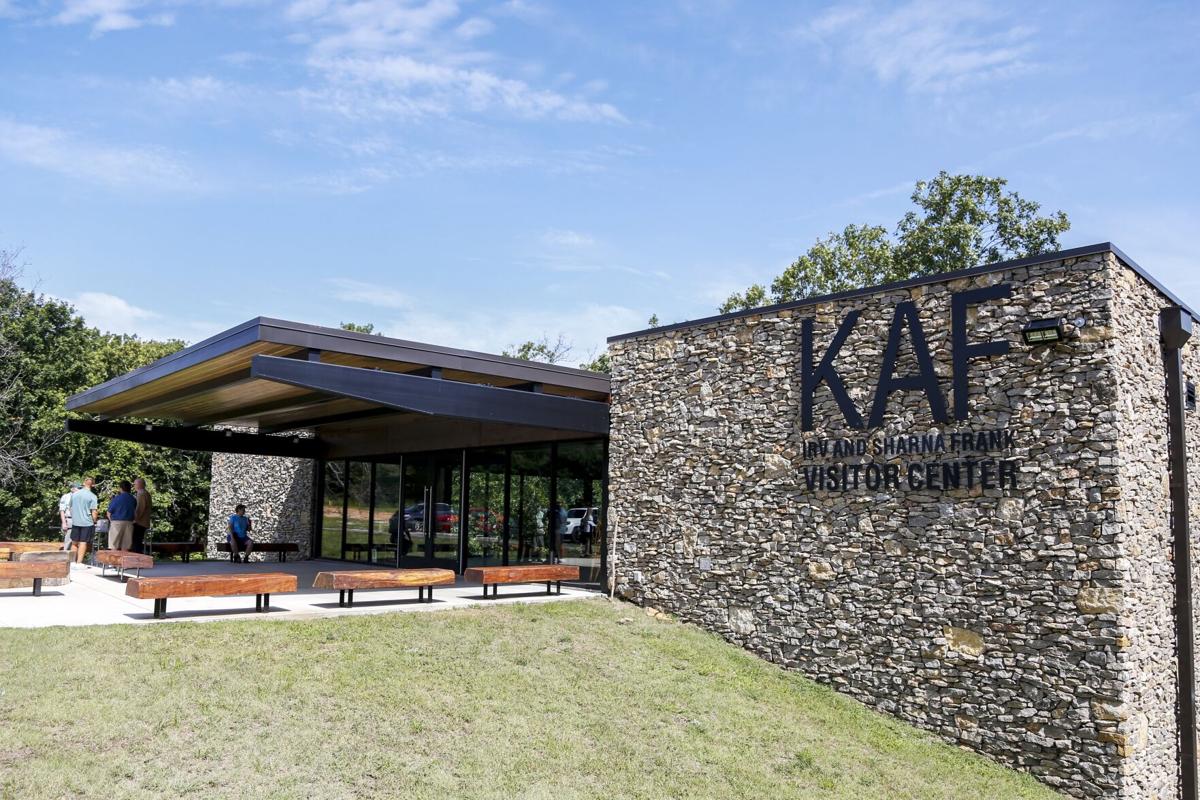 People gather outside the Keystone Ancient Forest visitor center Thursday for a ceremony to induct the preserve into the Old-Growth Forest Network.

SAND SPRINGS — There’s a certain kinship between Jacques LaFrance and the Keystone Ancient Forest, where he has served as an “ambassador,” or trail guide, since the forest opened to the public in 2007.

At 82, LaFrance knows a little bit about getting up in years. But he also knows about aging well, saying he eats right and gets plenty of exercise.

His fitness was apparent Thursday when LaFrance, who holds a Ph.D. in computer science and taught the subject for 27 years before he retired, led visitors on a 2-plus-mile hike around the preserve, stopping periodically to discuss its native flora and fauna.

The Keystone Ancient Forest is considerably older than LaFrance, but it, too, seems to be aging well. Its age is, in fact, the reason for Thursday’s hike, which was preceded by a ceremony commemorating the forest’s induction into the Old-Growth Forest Network.

The honor from the national network is in celebration of the Keystone Ancient Forest’s efforts to both preserve the old-growth forest and its 500-year-old cedars and 300-year-old post oak trees as well as ensure that the forest remains publicly accessible.

Sarah Horsley, the manager of the Old-Growth Forest Network, presented a plaque to recognize the Keystone Ancient Forest as the network’s 138th inductee in its effort to preserve at least one forest in every county in the United States that can sustain a forest —estimated to be 2,370 counties out of a total of 3,140.

But the honor also “marks our 25th state,” she said. “So that means that we have now covered half of the country, ensuring that there is protected old-growth forest throughout forested counties of our country.

“And these are not only protected old-growth forests,” Horsley added, “but we ensure that these forests are publicly accessible, and they will never have logging going on, and they will never be destroyed, so future generations can see the treasures that we have today.”

Horsley said the Old-Growth Forest Network is working county by county across the country to make that vision possible.

“And even if there is no old growth left, which is the case for many places in the United States,” she said, “if we protect the forest now, it will one day age into old growth.”

“We’re very proud of Keystone Ancient Forest for providing excellent facilities, incredible trail access and public programming and having hiking days that are very accessible to people in this area,” she said.

The preserve is owned by the city of Sand Springs and protected through a conservation easement held by The Nature Conservancy. It is the first Oklahoma forest to be included in the Old-Growth Forest Network.

Accepting the award on behalf of the city, Mayor Jim Spoon said: “This is an honor for Sand Springs. We’re very proud of this facility and this forest. We’ve been just really impressed with the number of people that have attended the forest, and we’re proud to be part of the network.”

City Parks and Recreation Department Director Jeff Edwards paid tribute to the people who realized the significance of and first began to protect the Keystone Ancient Forest, including Irv Frank, who owned the property.

He encouraged visitors to remember “the time and commitment and dedication that they provided to this place to learn about it, study it, say, ‘Hey, this is very valuable’ and … actually take the motion to protect it.”

“They could have been selfish, but they weren’t. They were selfless,” he said. “And because of their efforts 20, 25 years ago, we have this property in perpetuity now for all Oklahomans to enjoy.

“And that’s a great honor and a testament to what the Old-Growth Forest Network is all about, and I think maybe that’s why this was such a no-brainer for their network to join our mission here.”

City Councilor Brian Jackson said the preserve “is important to me and my family because my daughter … this was her first hiking experience right here in Sand Springs at the Keystone Ancient Forest.”

Thomas Forbes, who was hired in December as the facility’s first full-time coordinator, said he appreciates his position “to protect and preserve the forest for future generations.”

City Manager Mike Carter thanked the Keystone Ancient Forest’s many donors, as well as the Old Growth Forest Network, and he had a special thank-you for the residents of Sand Springs, whose tax dollars make much of the preserve’s success possible.

“It keeps us an outdoors community that is looking every day to have assets like this not only for our citizens but for Oklahoma and actually the region,” he said. “We have had people travel from all over the world to experience this forest, so we thank our citizens for that.”

With the 1,400-acre preserve’s newly opened million-dollar visitor center, a freshly unveiled additional hiking trail and two recent expansions of its public hiking hours, there’s a lot to be thankful for.

But for LaFrance, his gratitude also goes to the forest itself. More than once on Thursday’s hike, he reminded visitors to enjoy what can be seen as well as what can’t — the wind blowing through the trees, the singing birds and the chirping cicadas.

Do you love Sand Springs as much as we do?

Jacques LaFrance guides a group on the Frank Trail at the Keystone Ancient Forest on Thursday. LaFrance has been a trail guide since the forest opened to the public in 2007.

Jacques LaFrance explains old-growth areas at the Keystone Ancient Forest on Thursday. LaFrance is 82 and has been a volunteer and guide at the preserve for 14 years.

Jacques LaFrance (right), a volunteer and trail guide at the Keystone Ancient Forest, leads visitors on a hike Thursday after the induction of the preserve into the Old-Growth Forest Network.

A natural prairie off the Frank Trail at the Keystone Ancient Forest is seen Thursday.

People gather outside the Keystone Ancient Forest visitor center Thursday for a ceremony to induct the preserve into the Old-Growth Forest Network.