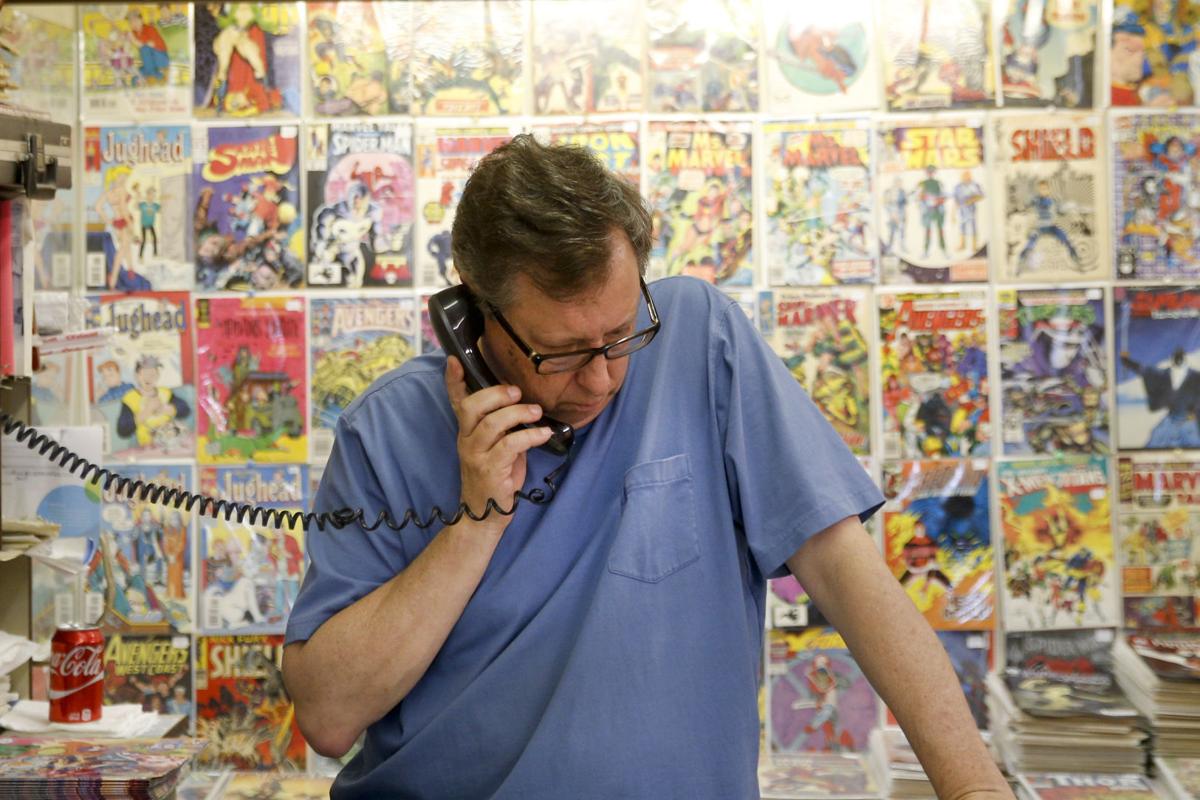 Michael McCormick was a customer the second day Comic Empire of Tulsa was open for business in 1976. He took over ownership of the store in 1984. McCormick, shown in a 2016 file photo, sold the shop to someone who has been a customer since the mid-1990s. 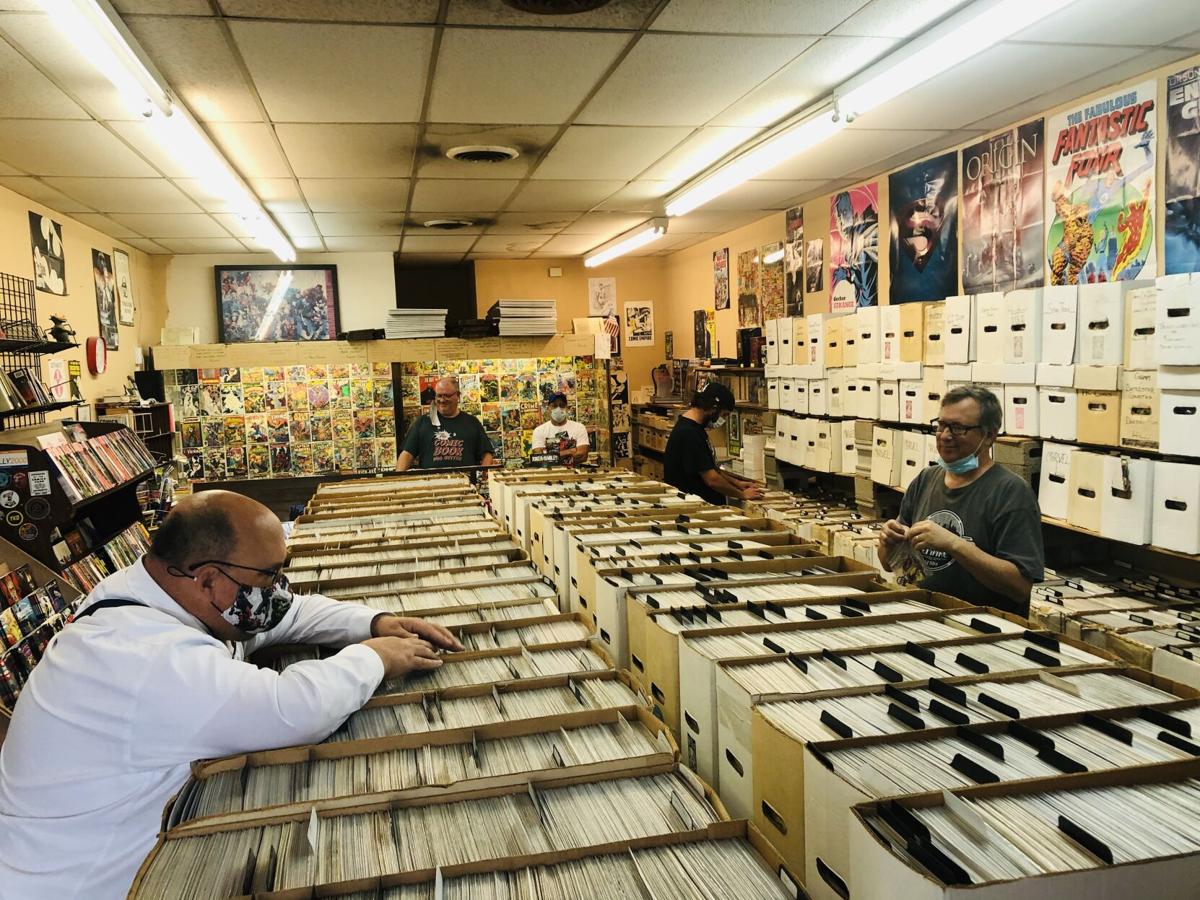 Michael McCormick (right), who has owned Comic Empire of Tulsa since 1984, holds court with store guests on one of his final days at the store. McCormick sold the state’s longest-surviving comic shop to Kenneth Hooker, who is standing in the background. 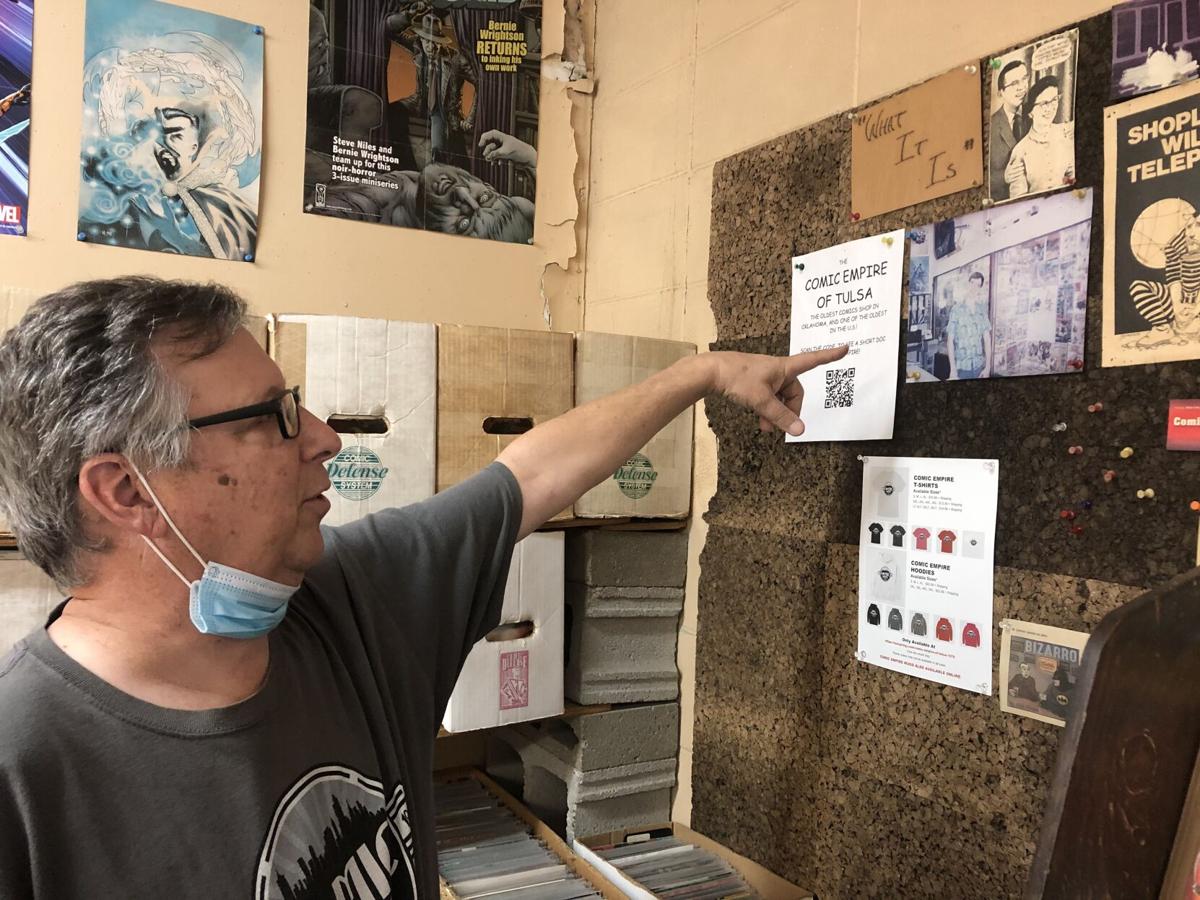 Michael McCormick, who has owned Comic Empire of Tulsa since 1984, points to a photo taken in his early days of operating the state’s longest-surviving comic shop.

Mike McCormick has been behind the counter at Comic Empire of Tulsa for 36 years.

It was time to turn the page.

McCormick woke up in a new world this week. In this world, he calls himself a “house husband” instead of comic shop owner. It’s a world of his making. He chose to retire, bringing about the end of an era — but not the end of Oklahoma’s longest-surviving comic book store.

McCormick sold the store (one of the oldest in the nation), and it was an in-house transaction. He handed the keys to Kenneth Hooker, a customer since the mid-1990s who, holding down the fort on Sundays, became a store employee.

“My biggest deal is I didn’t want to shut the store,” McCormick said. “Most mom-and-pop stores probably don’t re-sell. Mom and Pop, they can’t find a buyer, so what happens? They liquidate, they shut down, they move on and that’s the end of that little shop.”

McCormick said he probably could have gotten twice as much for Comic Empire, but he preferred an express-lane transition that would allow him to be of immediate help to wife Gail, who has battled a health predicament.

Maybe McCormick, 62, is retiring a couple of years early, but all things considered, the timing was right to step aside. He didn’t want to exhaust a year or two looking for the alleged “right” buyer when there was already a willing new owner on the premises.

“I didn’t want (to sell to) some three-piece-suit guy who didn’t know jack about comics,” McCormick said. “I needed somebody who knew something about comics. If you’re going to run a comic shop, it helps to know about your stock. ... I run into some people who own comic shops and it’s like, why are you even in this business? You may be a business person, but you don’t know anything about what you are selling, which is kind of a negative thing. That’s why I never did gaming or action figures. I don’t know one toy from another. They all look the same. And the square heads all look the same to me, those (Funko) Pop figures.”

Score this as the second time McCormick took steps to ensure the store’s continued existence. He isn’t the original owner, but he has been a face at the store since as close as you can get to day one.

Comic Empire of Tulsa, 3122 S. Mingo Road, opened in 1976. McCormick heard a radio advertisement on the store’s second day of operation. A comic store? Really? McCormick hustled to the shop, spent about three hours exploring and became a “regular.”

By 1984, the owner was ready to escape. McCormick said the Memorial Day flood of ‘84 (much of the shop’s inventory was evacuated or elevated to higher ground) broke the owner’s heart “so bad that he shut the door and left for California and didn’t care that shipments were coming in every week. He was gone. Is he coming back? We weren’t sure.”

Not long after the floodwaters receded, McCormick took over ownership of the store. He was offered a sweet deal, but there was still a big knot in his stomach when he signed the check: “I didn’t think I would be here six months, let alone 36 years.”

The store’s peak years came around the time (“maybe a hair before”) the “Batman” movie of 1989 was released. The comic industry boomed. Then Superman “died” in 1993. Speculators swooped in to buy multiple copies and make it a sales hit. Clark Kent got better, but many comic shops were mortally wounded.

“When they brought him back, that put a sour taste in a lot of people’s mouths, especially new people who had come in,” McCormick said during a 2016 interview.

By the end of the 1990s, more than half of the nation’s comic shops had gone extinct. James Davis, during a recent visit to Comic Empire, talked with McCormick about Tulsa-area comic shops that have come and gone. Among them was Starbase 21, which closed in 2014 after nearly 30 years of operation. McCormick said Starbase 21’s owners tried selling the store but couldn’t find a buyer. Lesson learned.

When word spread that McCormick was selling Comic Empire, many people visited the store to pay their respects. He thanked them for being customers who kept the place going. He said there are 10 or 12 “lifers” who have been with the store since it opened.

McCormick, asked if he acquired any super powers in his decades at the store, suggested it might be chit-chat power. Customers visited for comics, but — bonus — they were treated to conversation and store music (old-school cassettes tapes) that Hooker described as eclectic.

“I’m the one who is here eight hours a day,” McCormick said. “I’m playing what I want to hear.”

The store is Hooker’s jukebox now, and he can change the music if he wants. Changes? McCormick is old-school enough that he doesn’t like some of the industry changes, which reinforces his belief that the time is right for fresh blood.

“I can’t fill out a paper order form any more and mail it in,” McCormick said, meaning that it’s frowned upon. “They always wanted to know why I resisted (ordering online). Uh, do you know what business you are in? The paper business. You are in the printing comic business and you want to know why? It’s because I love paper. I’m a paper guy. I’m a book guy. I’ve got a boatload of books. That’s on my agenda, too, is to clean out my library.”

McCormick, who seems at peace with his decision to retire, was asked how he feels. He started his response with this: “I don’t know. I’m kind of accepting it. But I’m sure I’ll miss this place and miss BS-ing with the customers.”

The year after Comic Empire opened, Marvel launched a series titled “What If” that explored what might have happened if characters chose the road not taken. There’s a road abandoned in McCormick’s story.

Prior to becoming a comic shop owner, McCormick, armed with an engineering degree from Oklahoma State, was a riser in the corporate world. He said the three-piece suit world was not conducive to his wardrobe or musical tastes. His mother gave him grief for tossing his diploma aside to sell comics. He said he doesn’t want to know how much money he would be making (“but it would be a lot”) now if he had stuck with his original career.

“No. I was never a big money-motivated guy,” he said. “Money is great, lovely and wonderful, but I would rather do something I enjoy. What’s the old (saying) about if you enjoy what you do, you never work a day in your life? I tell people I retired in 1984 when I bought this place.”

‘Gunsmoke’ at 65: Let’s revisit historic TV series, see exhibit with ties to the show in Oklahoma

Michael Overall: When COVID hits home, complacency has to end

It’s no longer just about the economy or politics or keeping schools open or “getting back to normal.” It’s life and death.

No explanation for the move has been provided, but Nick Doctor confirmed that he had been let go; Mayor G.T. Bynum did not respond to a request for comment.

Michael McCormick was a customer the second day Comic Empire of Tulsa was open for business in 1976. He took over ownership of the store in 1984. McCormick, shown in a 2016 file photo, sold the shop to someone who has been a customer since the mid-1990s.

Michael McCormick (right), who has owned Comic Empire of Tulsa since 1984, holds court with store guests on one of his final days at the store. McCormick sold the state’s longest-surviving comic shop to Kenneth Hooker, who is standing in the background.

Michael McCormick, who has owned Comic Empire of Tulsa since 1984, points to a photo taken in his early days of operating the state’s longest-surviving comic shop.