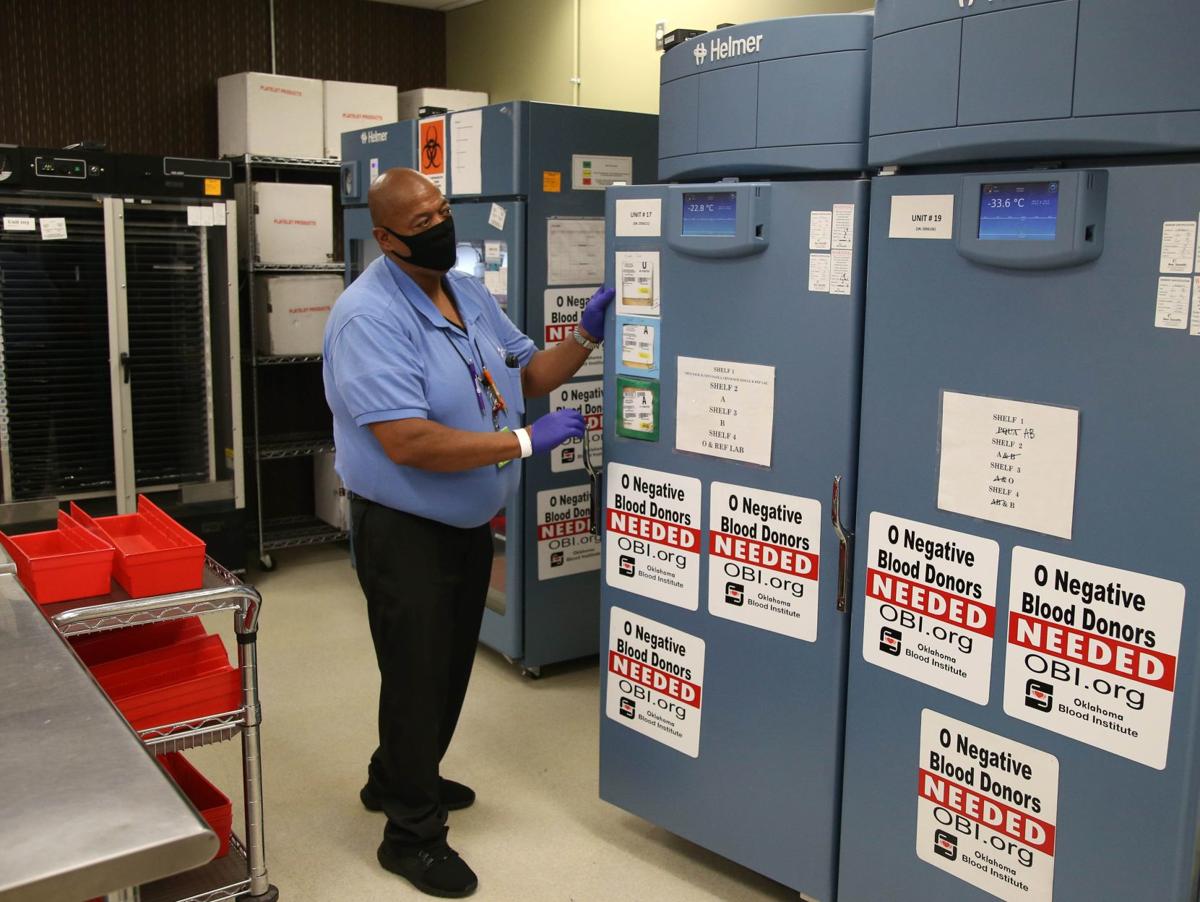 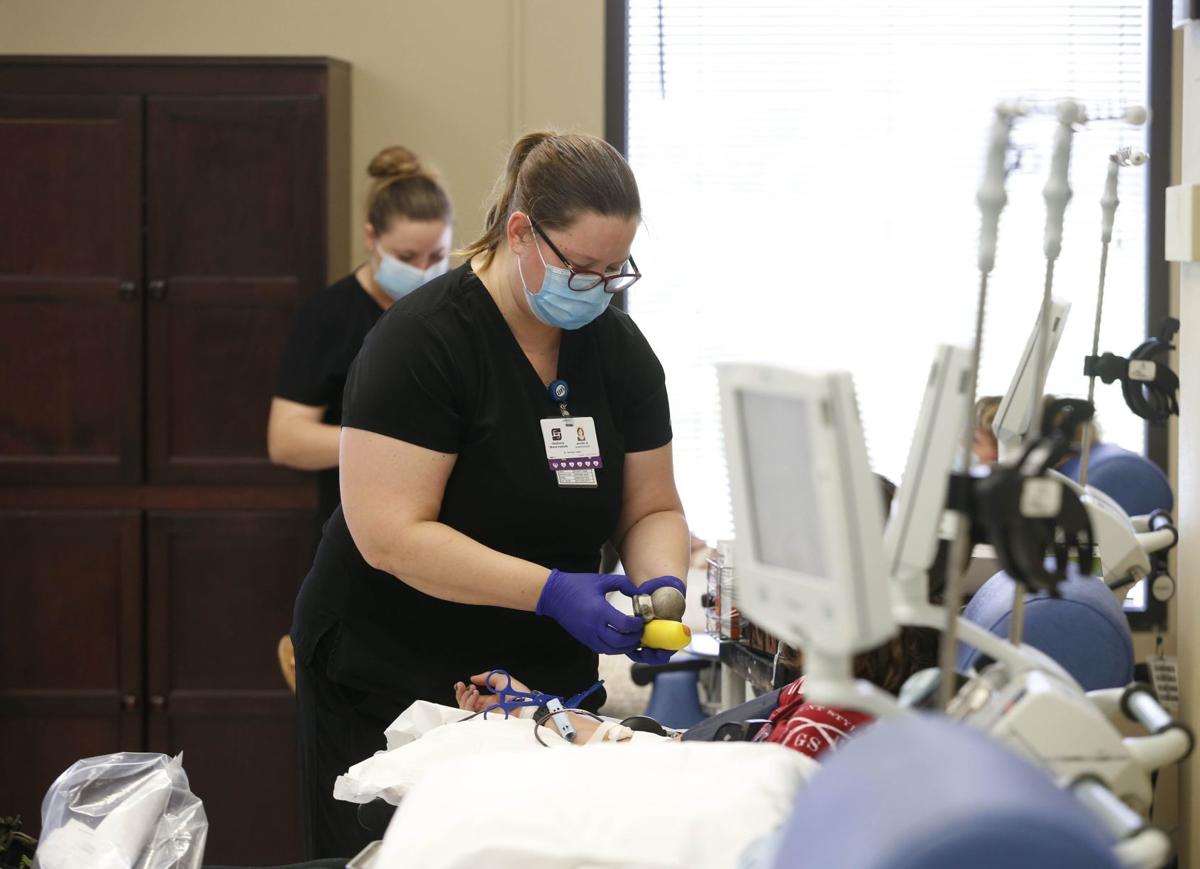 Phlebotomist Jennifer Myhre works with a patient at the Oklahoma Blood Institute’s facility in Tulsa on Tuesday. The agency is calling on COVID-19 survivors to donate plasma, which can be used to create treatments for others. MATT BARNARD/Tulsa World 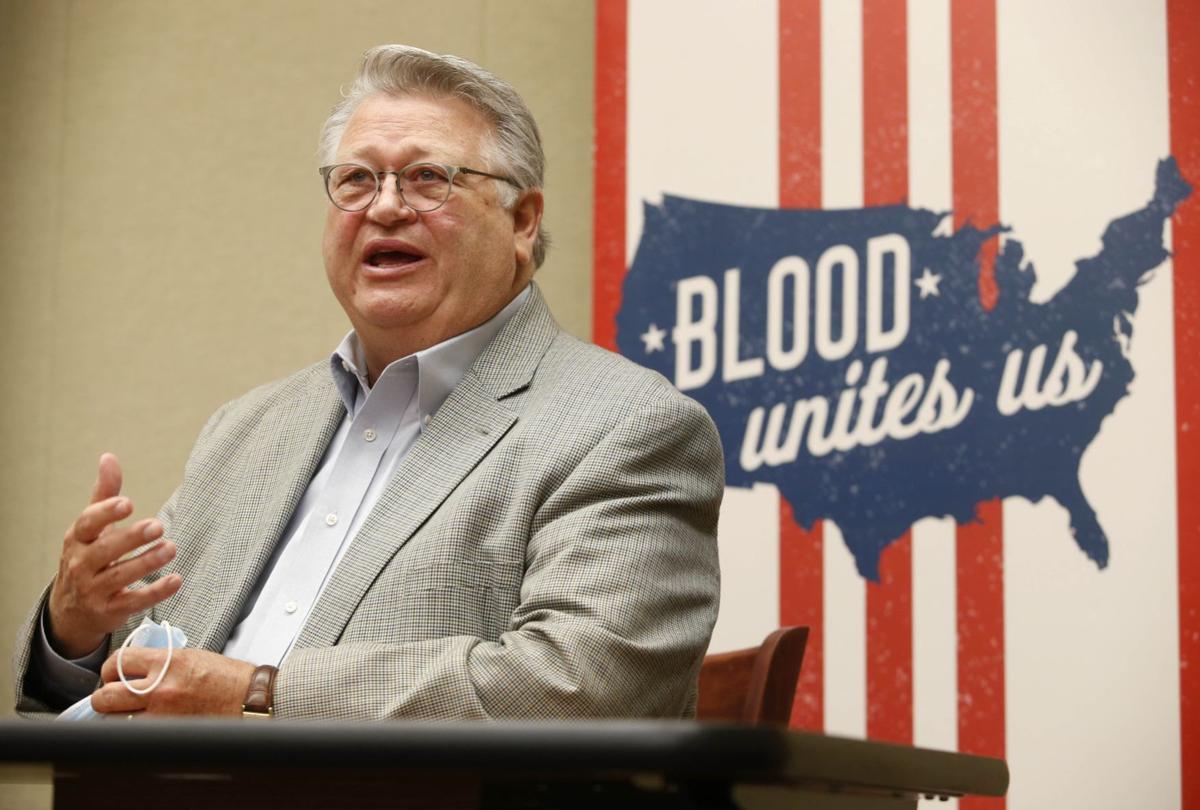 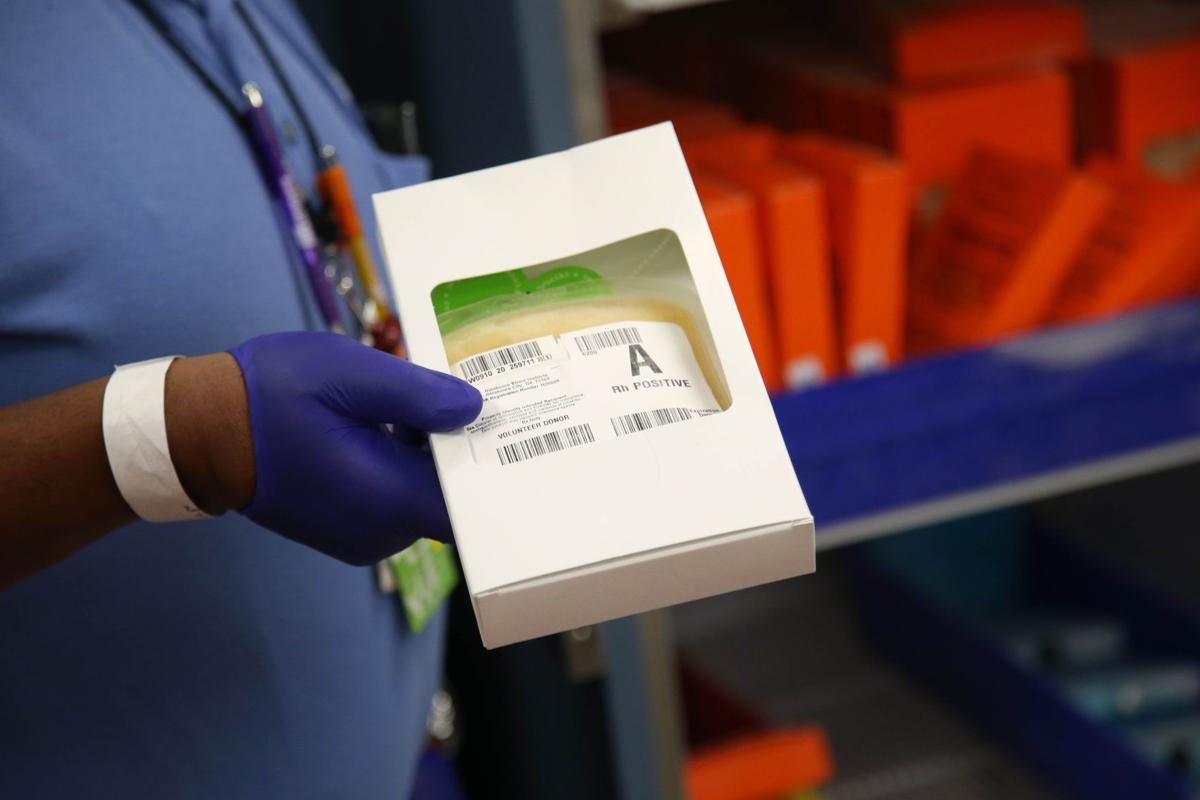 The odds of Keith Townsley surviving COVID-19 were perhaps as miniscule as the pin-size hole in his nearly clogged ventilator tube early in the pandemic when fewer patients emerged from hospitals.

Doctors successfully swapped out equipment, giving the Jenks resident more time to overcome the disease that ultimately had him on a ventilator for three weeks. Townsley recounted his story Tuesday to reporters three months to the day after he received a convalescent plasma transfusion that boosted him toward a remarkable recovery — albeit lacking his previous stamina.

Townsley, 60, urges people who have recovered to donate convalescent plasma — antibody-rich blood — to help treat the surging hospitalizations in Oklahoma.

“It’s such a concern to me when I hear people being frivolous,” Townsley said. “I’m thinking, ‘You just haven’t been there, or you don’t have someone that you really love that’s been there,’ because this thing is ugly and it’s a killer.”

In the past five weeks, requests for convalescent plasma from the Oklahoma Blood Institute have multiplied seven-fold.

Dr. John Armitage, OBI’s president and CEO, said that the nonprofit is supplying 270 units per day compared to 40 units a day five weeks ago. The demand jumped 100 units per day this past week above the prior week.

The blood bank’s convalescent plasma stockpile is down to just less than two days of supply, he said.

“If our number goes to 370 (units a day) this week, I’m not sure if we won’t have zero on the shelf by the end of that,” Armitage said.

After waiting three months, Townsley said he is eager to donate his convalescent plasma to hopefully help someone else in a similar fashion.

A ‘shove’ into health

Townsley was hospitalized in March with COVID-19 after first believing he was ill with double pneumonia like a friend of his. Townsley was awakened after three weeks on the ventilator, then experiencing five “very weak and difficult days” as he stared down the prospect of rehabilitation.

He felt physically depleted. He couldn’t walk, feed himself or even sit up without falling over.

“They then gave me the plasma and within two days I was out of ICU,” Townsley said. “I’m up and walking like 25 steps with a walker. I got my first shower, a wonderful experience. ... Just a lot of things that transpired after that that could not have before.

“It felt like it was a shove for me that just shoved me over into health.”

Doctors weren’t confident that Townsley would survive when he was on a ventilator.

Dr. Brian Worley, medical director of the ICU at Hillcrest Hospital South, said Townsley was “hour-by-hour at best” and that replacing an airway clogged by blood and secretions is “nerve-racking” because of how fast the patient could slip away.

Worley said Townsley’s age, severity of condition and time spent on a ventilator made it almost unheard of for him to be discharged to home rather than rehab.

Patients on ventilators usually undergo 10-14 days of rehab or more, he said.

“He bounced back with a blinding velocity,” Worley said. “You would have thought he was a 19-year-old kid.”

Townsley described the feeling as miraculous. But, even three months later, his stamina hasn’t fully returned to pre-coronavirus levels.

“It’s a catch-22. If I don’t have a lot going on in the day, then I spend my morning doing some exercising and walking and things like that because I have X amount of energy in the day, and strength,” Townsley said. “And if I use it up, it’s gone for the rest of the day.

“So I can use that exercising and whatever or, if I have things that I have to do, I have to save it for that later on in the day. So it just kind of depends. Some days get exercise; some days don’t. Some days just getting through the day is the exercise.”

Convalescent plasma is a treatment — not a cure-all — as doctors and scientists battle the novel coronavirus, Armitage said.

Armitage, Townsley and Worley all encourage people who have recovered from COVID-19 to donate convalescent plasma to save lives.

The Oklahoma Blood Institute offers antibody testing on blood donations to see if a person had COVID-19 and didn’t realize it to tap into another potential donor pool.

Armitage said places that pay for plasma are working on developing future treatments. With patients dying today, he said, it’s important to donate to a blood center to treat people in the present.

He said doctors are giving plasma to patients sooner and in two units instead of one.

“The rest of the nation is already running out of this,” Armitage said. “The early places like New York — they have a lot of donors come in because they’ve had a lot of the disease — they’ve been supplying from their population the rest of the country.

“Right now the speed of this surge is outstripping anything that was put on the shelf for a rainy day. It’s thundering and raining cats and dogs right now.”

Oklahoma Blood Institute appointments can be made by calling 1-877-340-8777 or visiting obi.org.

Appointments to donate blood with the American Red Cross in Tulsa can be made by calling 918-831-1100 or visiting redcross.org/local/oklahoma.html.

Mayor G.T. Bynum said he's heard many people express safety concerns about the event at Victory Church with no masks and no social distance and "multiple ordinances" will be considered next week.

Phlebotomist Jennifer Myhre works with a patient at the Oklahoma Blood Institute’s facility in Tulsa on Tuesday. The agency is calling on COVID-19 survivors to donate plasma, which can be used to create treatments for others. MATT BARNARD/Tulsa World 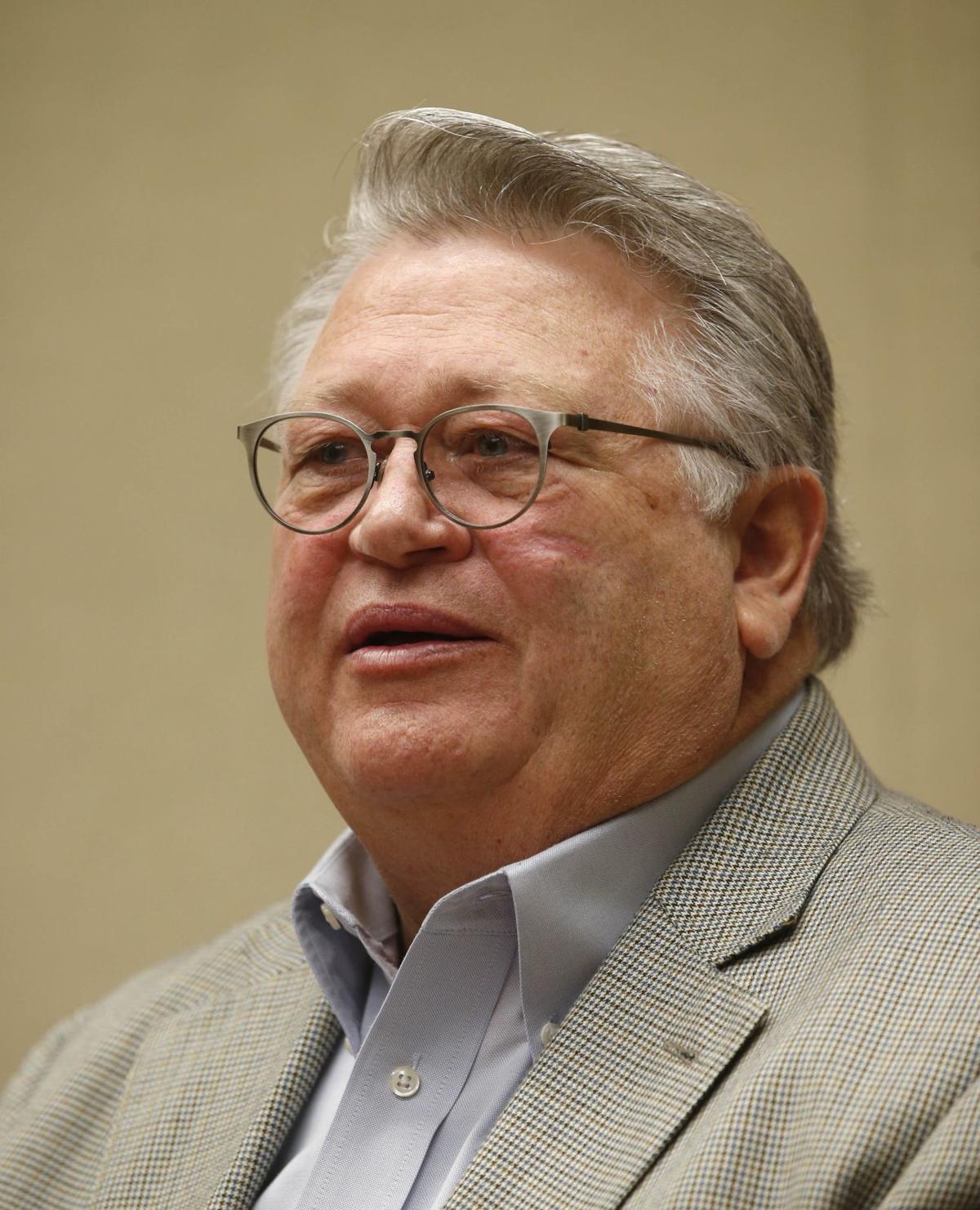